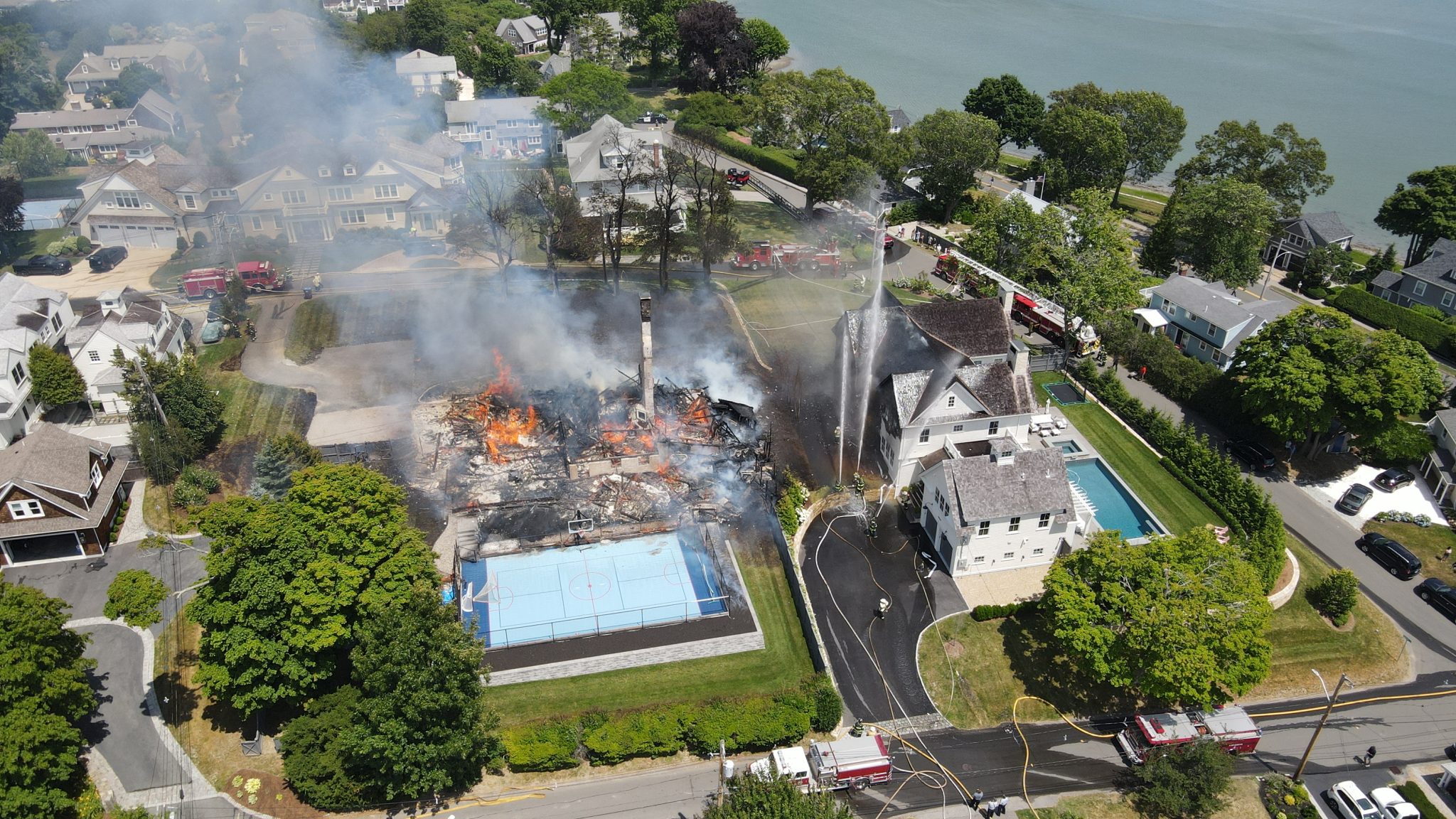 Firefighters from Hingham, Cohasset, Hull, Norwell, Scituate, Rockland, Braintree, Weymouth, Quincy, and Hanover responded to a four-alarm fire at about 12:50 p.m.  at 4 Mann St. in Hingham.

The home was destroyed by flames, with only the chimney left standing and crews working to put out flames among the debris. In all, five buildings caught fire. Several homes in the area were evacuated as a precaution due to fire embers spreading to nearby houses.

Three people were inside 4 Mann Road when the initial fire started, and all got out safely. No injuries have been reported. The house is a total loss and the family was displaced. The cause and origin of the fire are under investigation by the Hingham Fire Department, the Hingham Police Department, and the State Police Fire & Explosion Investigation Unit assigned to the State Fire Marshal's office.

While responding to the scene, firefighters could see large amounts of smoke above the house and struck a second alarm. Upon arrival, the house was fully involved, and a third alarm was immediately called. At 1:30 p.m., Hingham Fire Chief Steve Murphy struck a fourth alarm as the fire continued to spread. 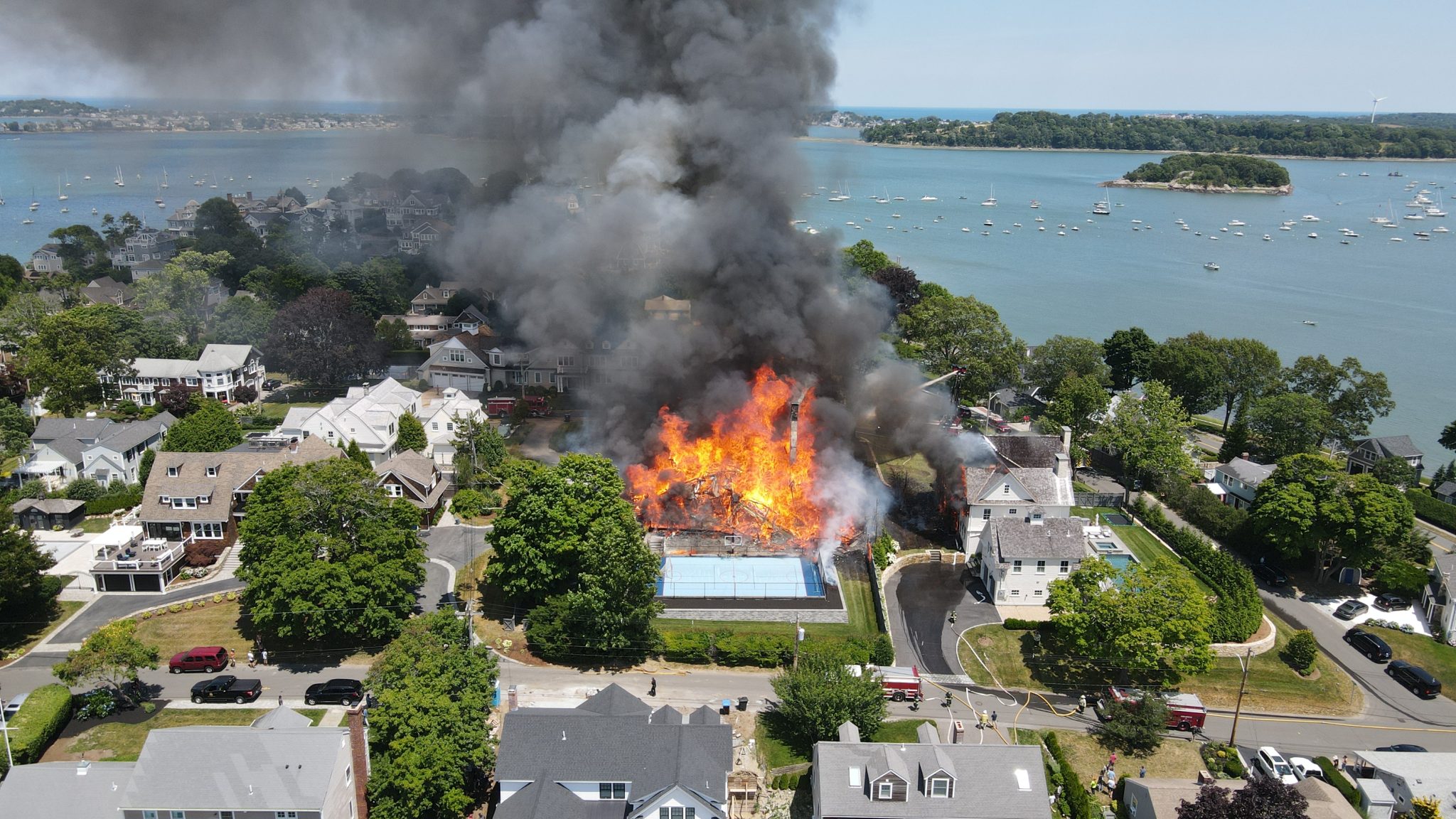 About 120 firefighters were called to the scene in all. Fire chiefs from Brockton and Whitman also responded to provide assistance. The Abington Fire Department provided station coverage. The Hingham Police Department controlled access to the site and assisted in evacuating neighbors from the affected area.

Initially, because of the location of the home on top of a hill, firefighters had difficulty accessing adequate water and had to stretch additional hose lines.

In addition, high wind speeds caused the fire to spread quickly and also blew hot embers onto four other nearby homes. A home at 2 Mann St. sustained significant fire damage, displacing the family. Murphy is also asking residents to water down mulch beds on their properties if they live in the area of the fire.

Videos and photos of the blaze show heavy smoke and flames that could be seen for miles around, and sirens were heard in different parts of town as helicopters flew overhead.

"The windy conditions and size of the home made this a difficult fire to extinguish," Murphy said. "I am glad that no one was hurt, and our hearts go out to the family that lost their home. I'd like to thank our mutual aid partners from neighboring departments who helped us extinguish the fire and prevent further property damage to other homes in the area."

According to Zillow, the 6,000-square-foot home was sold on June 10 for $3.2 million and had been renovated. Neighbors said the homeowners had just moved in recently.

Personnel from the Massachusetts Emergency Management Agency, the American Red Cross, the Salvation Army, the Boston Sparks Association, and ambulances from South Shore Hospital also responded to the scene.

National Grid and Hingham Municipal Lighting Plant were working to restore gas and electricity to the neighborhood after it had been shut off by the utility companies.

The Weir River Water system made automated calls/sent emails to customers alerting them that due to "a working fire in the area," they may experience discolored water.