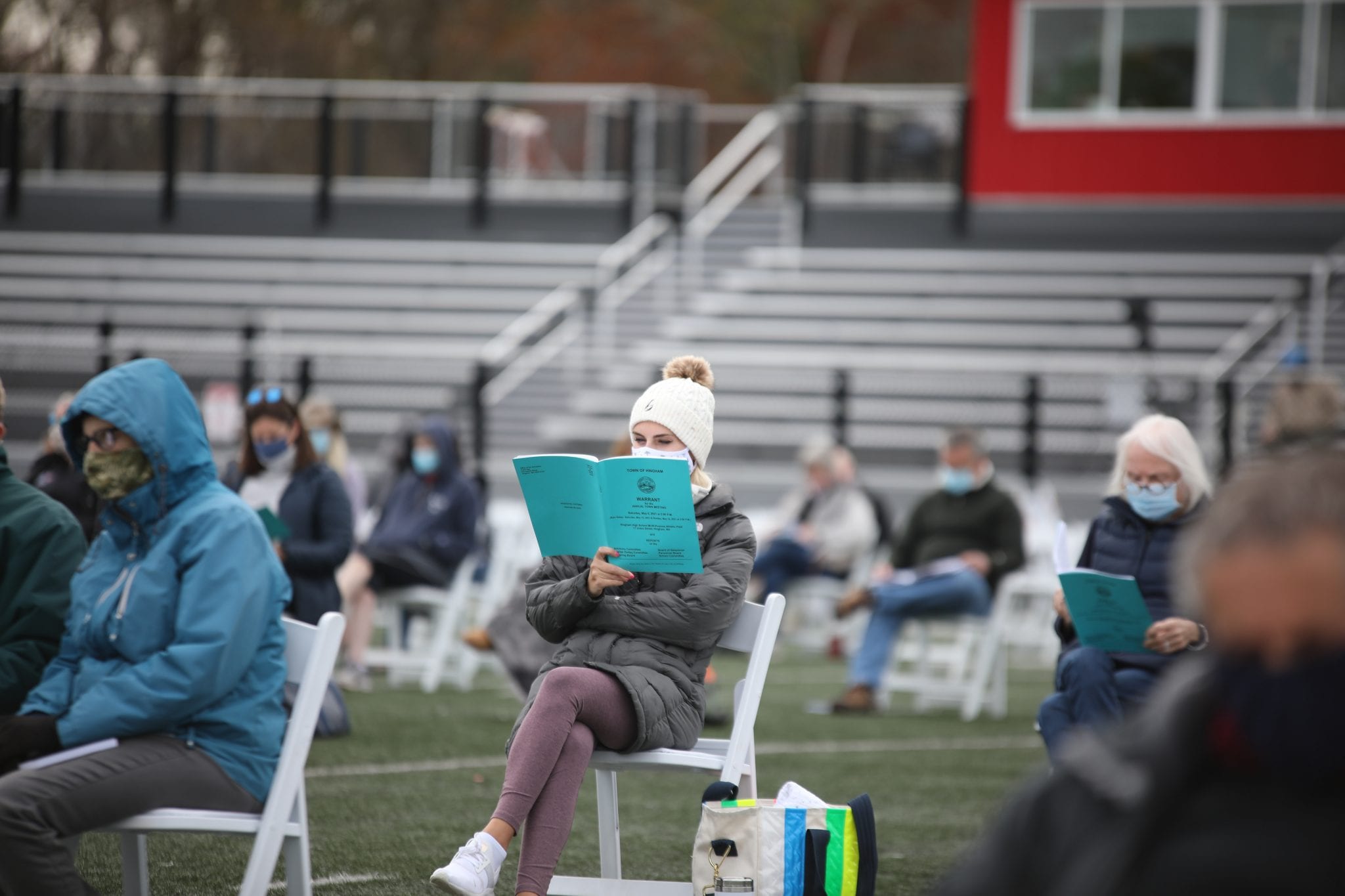 May 10, 2021 by Hilary Jenison and Carol Britton Meyer (photos by Joshua Ross)

For Saturday's Town Meeting, the weather held out and a good crowd -- bundled up, wearing face masks and socially -distanced -- gathered on the Hingham High School multi-purpose field to address 28 warrant articles.

Town Moderator Puzo welcomed all the citizens who attended. Guest speaker the Rev. Ken Read-Brown observed that those attending were "gathering united as citizens of Hingham," encouraging "respect for our differences and gratitude for all that we share in this beautiful town…"

There was a standing ovation for retiring Town Clerk Eileen McCracken for her many years of service, and also for Selectmen Chair Mary Power -- who is not running for re-election -- for her hard work over many years.

Most articles passed unanimously, including the recommended $133.7 million town budget, including $62.8 million for the schools.

Advisory Committee Chair Robert Curley provided background on the budget recommendations. “The pandemic presented challenges, especially related to the school budget," he said before the vote.  "The Advisory Committee unanimously supports the school recovery budget to support our children.”

Curley further stated that the town faces the prospect of a future override "or a reduction in services.”  The conclusion drawn was that Hingham's finances are challenged but sound and that there will be future considerations "on how to fund the level of services our town expects and deserves."

It was clear that climate change is a priority for the community and there was a clear majority voting in favor of creating a climate action planning committee, which will involve a public process to determine actions to becoming Net Zero by 2040. 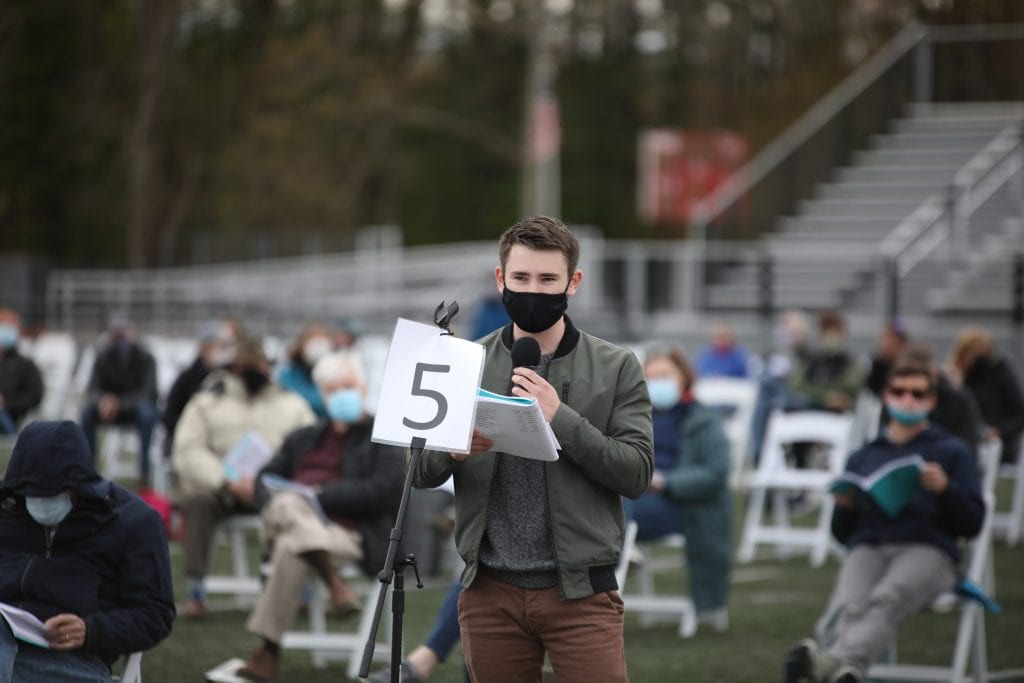 Andrew Rohleder advocated for the warrant article. “While climate change may seem like a global issue, the most important steps we can take are locally," he said.

Voters also authorized, although not unanimously and following robust discussion, the use of $1.6M to pay the costs associated with design, architectural, engineering, Owner's Project Manager, and other professional services to complete the schematic design and design development documents for a proposed new public safety facility at 335 Lincoln St.

Carlos Da Silva requested to amend the motion to include language that public safety facility plans be developed to address the town's environmental priorities, including building the facility to have “Net Zero Emissions.” Following lengthy discussion and commitment from town leadership to address environmental priorities in the public planning process, the requested change to the motion to include Net Zero language did not move forward.

Voters also approved unanimously additional money to finalize the development of the plans and specifications for the Route 3A/Rotary/Summer Street project. Most of the costs will be paid by the state.

Also supported unanimously was appropriating up to $5.65 million for the repair/reconstruction of the Town Pier Wharf to address safety issues and expected sea level rise.

The gender-neutral article also passed, calling for changing the words "selectmen" and "board of selectmen" wherever they appear in the Hingham General By-laws to "select board," "members of the select board," or "select board member," as appropriate, to replace the word "chairman" with "chair," and other related changes.

Voters unanimously voted "no action" on a citizen's petition to require the Select Board Chair to be recognized by the Town Moderator at the first session of an Annual Town Meeting to read a list of names of former employees, town volunteers, or elected officials who have died subsequent to the end of the prior year's annual Town Meeting and other related changes.

The current practice at the Annual Town Meeting is to read a list of deceased municipal employees who died in the prior year.

There was a unanimous vote of approval to fund part of the cost of the replacement of the Plymouth River School windows, with some money already set aside and expected partial reimbursement from the Massachusetts School Building Authority.

Also unanimously approved was establishing an Accessory Dwelling Unit Study Committee related in part to potentially allowing the creation of accessory dwelling units on a property in addition to the main dwelling, with certain requirements in place.

The crowd dispersed at the end of the meeting with the second year of socially-distanced Town Meeting business accomplished.