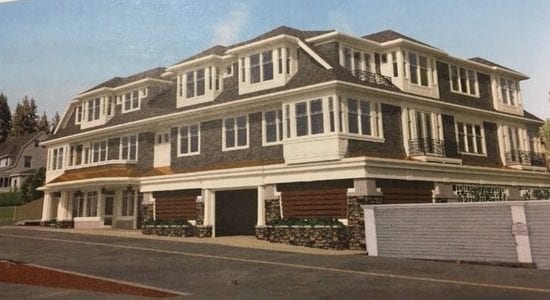 The message was clear — the mixed-use proposal for 25 and 33 Central St. designed with empty-nesters in mind is too big in size and scope for the surrounding neighborhood.

At last night’s joint planning board and zoning board of appeals hearing, board members expressed those concerns as well as others related to the planned interior garage for both the residential and commercial uses (with separate parking areas) with tandem parking and a lift, the design, and potential traffic and other impacts. Neighbors expressed concerns about privacy, pedestrian safety, and other issues.

“I do have concerns about the traffic flow,” said Police Chief Glenn Olsson. “I think there’s too much planned here for a tight space. I don’t have a lot of faith in the parking garage with all the people who would be coming and going. Something could eventually go wrong.”

The Respond Ventures, LLC  “state-of-the-art” proposal includes eight two-bedroom condos on the second and third floors, commercial space on the ground floor, balconies, a charging station for electric vehicles, optional private roof decks for the third-floor condos, an atrium with a skylight, bike racks, and a garage within the ground level of the building to provide parking for both uses. Krigsman Yoga has the option to continue to operate at this site. The two-bedroom, 2-1/2-bathroom units would range from 1,372 to 2,200 square feet.

ZBA member Paul Healey thinks there should be more communication between the developer and those living nearby. “We received a letter from a neighbor expressing concerns about the enormity of the project, which would strip away all the privacy on that side,” he said.

Planning Board Chair William Ramsey referred to the comments in this first joint hearing as “candid feedback — ”I think you need to reconsider the design concept, and I see a lot of problems with the parking scheme. The character and scale are also an issue,” he said.

The development would be built behind Hingham Community Center on the two lots now occupied by Krigsman Yoga and a private investigator. Both buildings would be leveled, for a combined 10,583-square-feet of space.

Bob Shepard, construction and development consultant for the project, said that “for 15 months we’ve held multiple meetings with town officials and direct abutters to make this project acceptable to the town and the community and that the building would add vitality to downtown by adding housing units in an area where residents could walk, shop, and do errands and other business.

Jim Demaggio, a member of the community center’s board of directors said while they aren’t opposed to redevelopment of the neighboring site, they are opposed to this particular plan. “It could have a negative impact on our mission,” he said, particularly with privacy and other issues related to the increasing use of HCC’s backyard space.

With regard to traffic, while the developer’s traffic engineer anticipates 15 or fewer trips during weekday peak morning and evening hours, concerns were expressed about the potential congestion and possible queuing onto Central Street that could occur when vehicles are trying to exit and enter at the same time. “While the external traffic [in the surrounding area] would be about the same, there would be more traffic at the site from cars parking there rather than on the street or in the merchants’ lot,” said the town’s traffic consultant Jeffrey Dirk.

The plan is for the developer to encourage residents to bike and to ride the Rte. 220 bus to Quincy Center from the nearby bus stop as alternative forms of transportation.

Central Street resident George Ford said in his view the developer “did one thing right — (including Shepard on the development team) — he’s first rate, but even he can’t fit this mass[ive building] into this space. This would be an abomination to traffic and parking in the downtown area. Traffic engineers never say there will be an increase in traffic — It’s balderdash! Town boards are supposed to serve the townsfolk, and I urge you to deny this application!”

Lafayette Avenue resident John Rice, whose property overlooks the proposed development site, noted that drivers “speed down Central Street, and with people coming in and out of the garage, safety issues need to be addressed.”

At an earlier advisory design review hearing, the Historic Districts Commission agreed that the building is too large for the site and because of its size and design doesn't provide an appropriate transition from the single-family homes on Central Street to the downtown area. The building would not be located in an historic district, but the HDC weighed in to ensure the project fits in with the surrounding streetscape.

The next joint hearing is scheduled for Tuesday, Sept. 17.