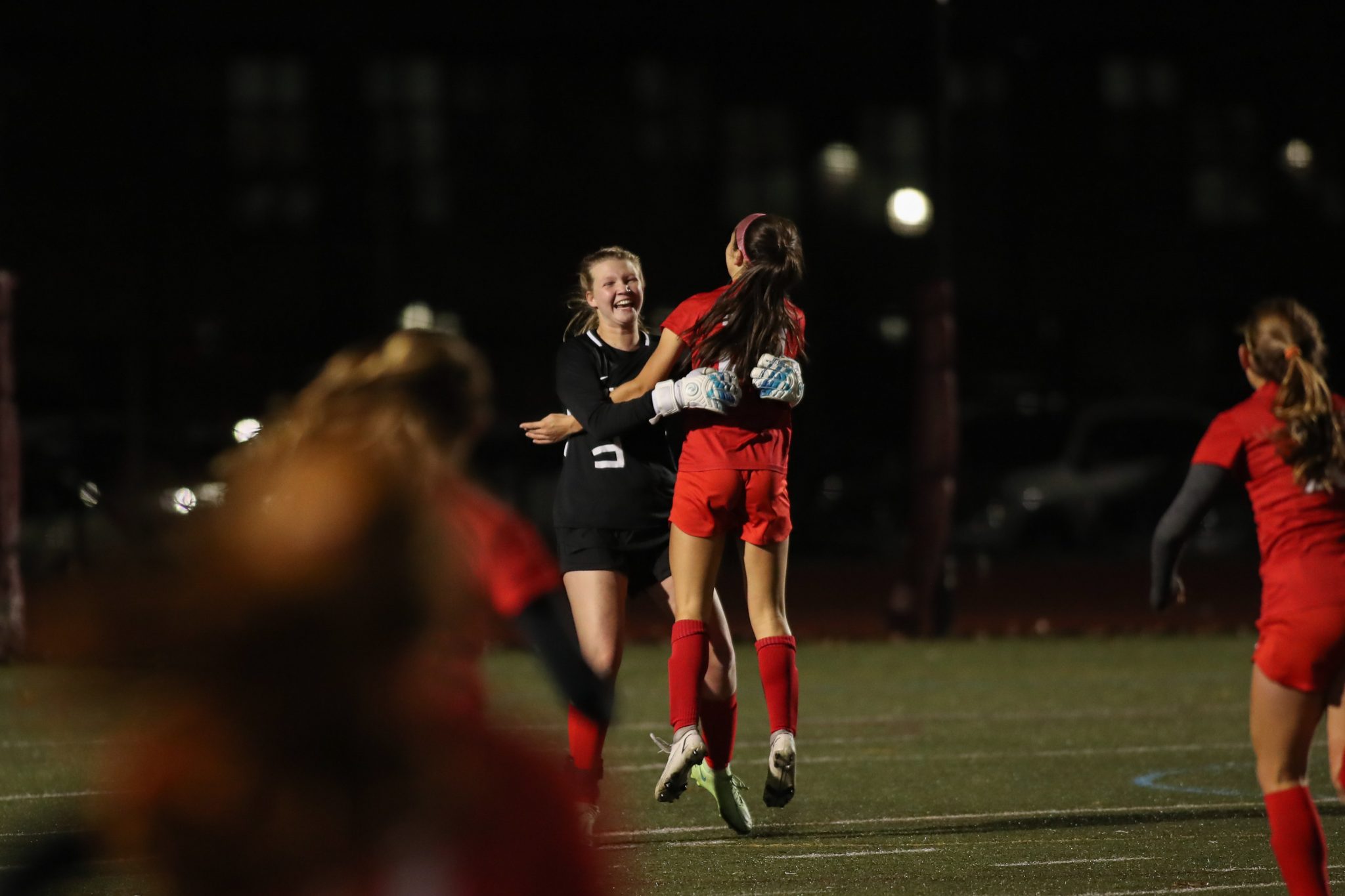 Sophomore Reese Pompeo jumps into the arms of senior goaltender Kathryn Wilson as the final whistle blows, sending the girls to the state finals!

As a photographer, you can never run of things to capture during a game.  And if the old adage is true that a picture is worth a thousand words, I might as well just post the photos of the girls soccer team because I’m running out of things to say to describe them.

In their most highly pressured game of the season last night, they made it look easy in their 4-0 win over Newton South in the semi-finals of the state tournament.  Part of it is just the raw talent on this team.  It’s off the charts.  Part of it is the outstanding coaching on the sidelines.  Coach Sarah Dacey has these girls ready to play each and every game.  But last night, what stood out the most, was the way they played as a team.   Every player contributed and made at least one play that either stopped a scoring chance, stole a ball, lead to a goal or actually scored a goal.

It’s easy to start with the offense, but it’s impossible to overlook the the zeros across the board in the goals allowed column during this playoff run.  It begins with senior goaltender Kathryn Wilson, who recorded her third straight clean sheet in the playoffs.  Coupled with the back line of senior captain Alexa Varholak, senior Cara Chiappinelli, junior Maddie Aughe, and sophomore Reese Pompeo, they form a defensive nightmare for opponents.   Last night was no different than almost every other game they’ve played this year.  Barely any quality shots allowed and big saves when needed.  I think there’s another adage out there that says defense wins championships.

“I think it’s crazy that we’ve been playing on these top teams in the state and we haven’t let up,” Wilson says after the game.  “There hasn’t been many great scoring opportunities for the other teams and I have to thank my backline for a lot of that. Our communication is really good.”

The offense hasn’t been too shabby either.  Four more goals last night giving them a total of 12 during the tournament.  While the front line of senior captain Ava Maguire, senior Olivia Sharkansky, and junior Sophie Reale are usually the ones finding the back of the net, the outstanding play of the midfielders are setting up most of these goals.  Senior Riley Cotter, junior Emily Gibbons, and sophomore Claire Murray make plays all game long that don’t ever show up stat sheets, but are huge reasons why this team is successful. Recently, Dacey said Cotter was the “unsung hero” of the team.  The same could be said for any of the three.

(Side note: It was late in the game, Hingham was up by three and well out of reach for Newton South at this point.  Claire Murray, who was just past midfield close to the sidelines, made a pass to Olivia Sharkansky, who was running up the opposite side of the field, 30 yards downfield.  The ball had to have traveled close to 50 yards in the air.  It landed on the foot of Sharkansky, who made one move and scored the 4th goal.  I turned to Hingham trainer Al Blaisdell and said “that was probably the best pass I have ever seen in a soccer game.” He nodded after he picked his jaw up off the ground.)

There’s still one more game left before the team accomplishes their ultimate goal.  They are a facing a tough Natick team, who like Hingham, haven’t allowed a goal all tournament.  They’ve beaten the second (Bishop Feehan) and third (Acton-Boxborough) ranked teams during their run for a state title.  They game will be held on a familiar pitch in Whitman-Hanson on Saturday at 3pm.

Throughout the year, Dacey has said if this team plays the way they know how, they can beat anybody.  If they play the way they played last night, they will be just fine. 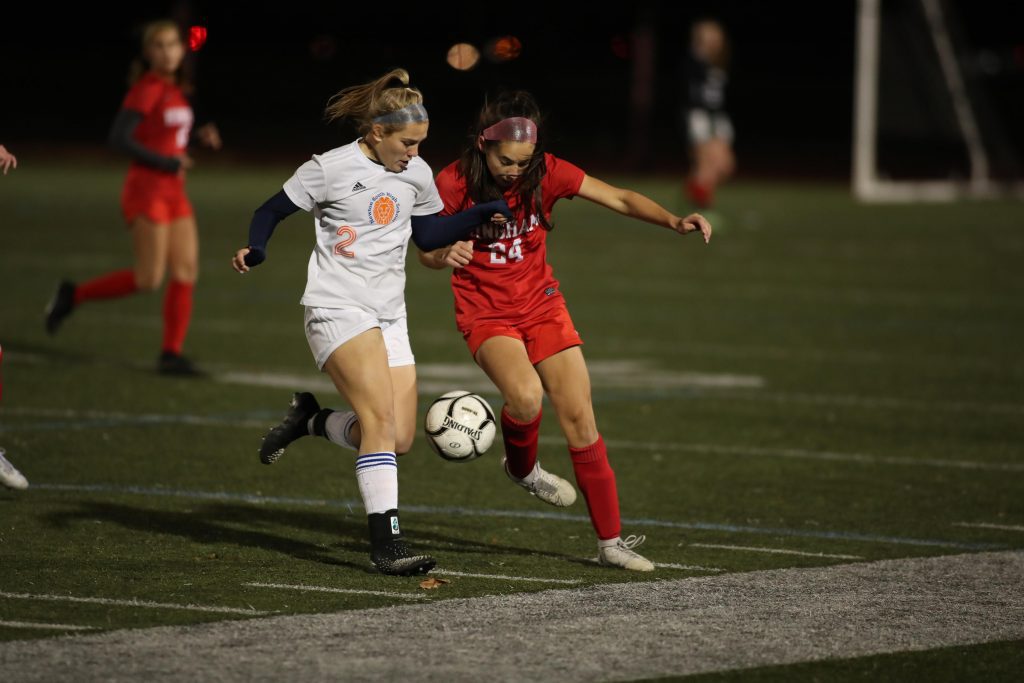 Sophomore Reese Pompeo has solidified her spot on the backline for years to come. 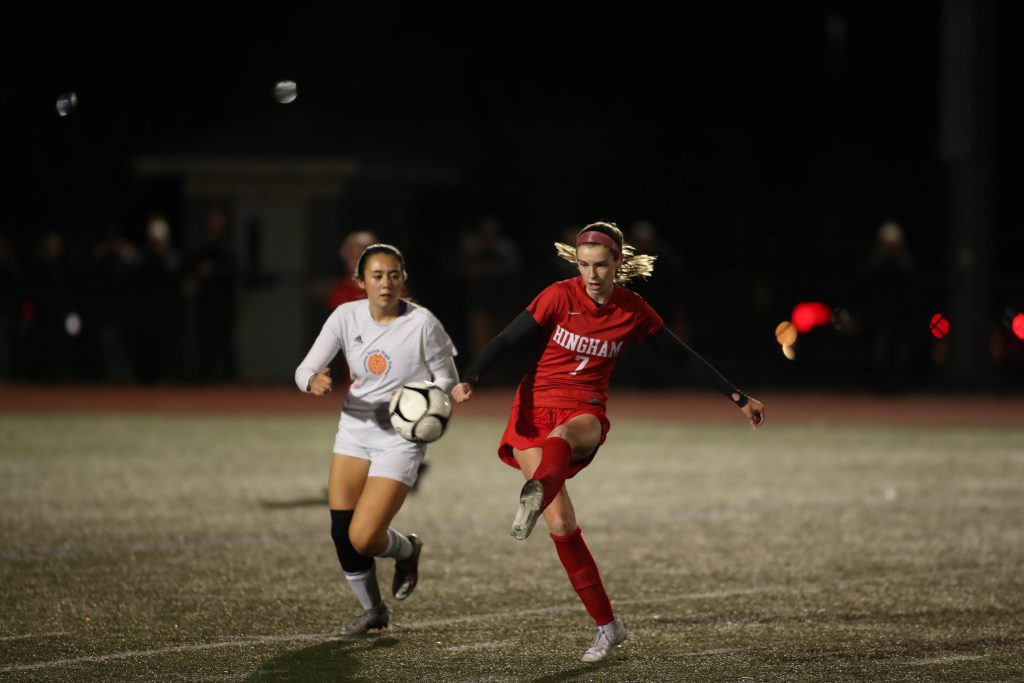 Junior Emily Gibbons passes the ball to a teammate early in the game. 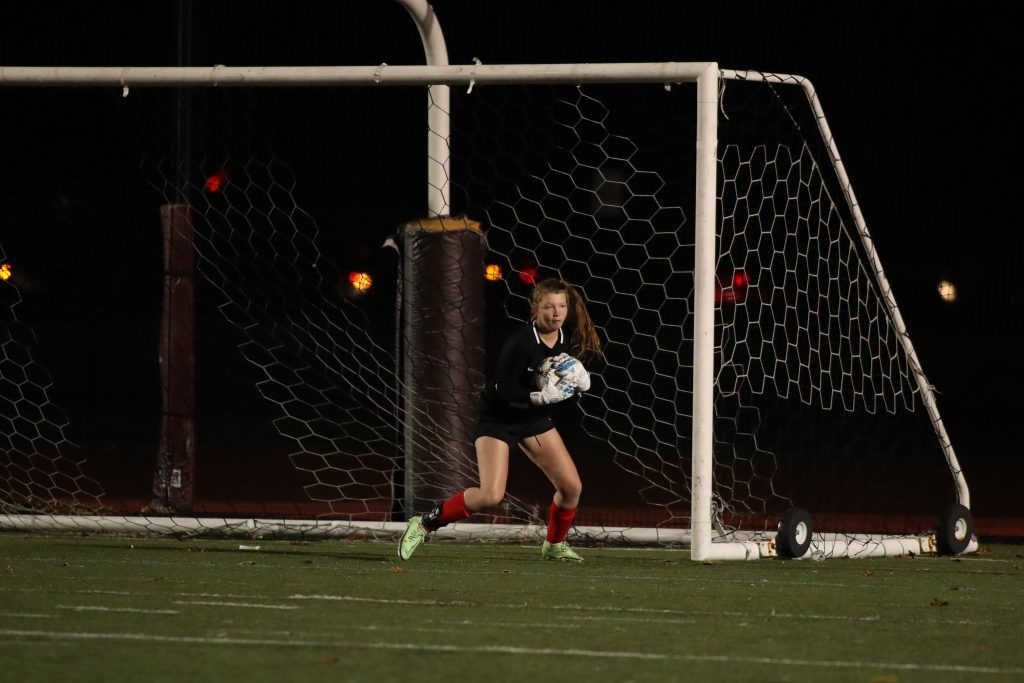 Senior Kathryn Wison only need to make a few stops in Hingham's win. 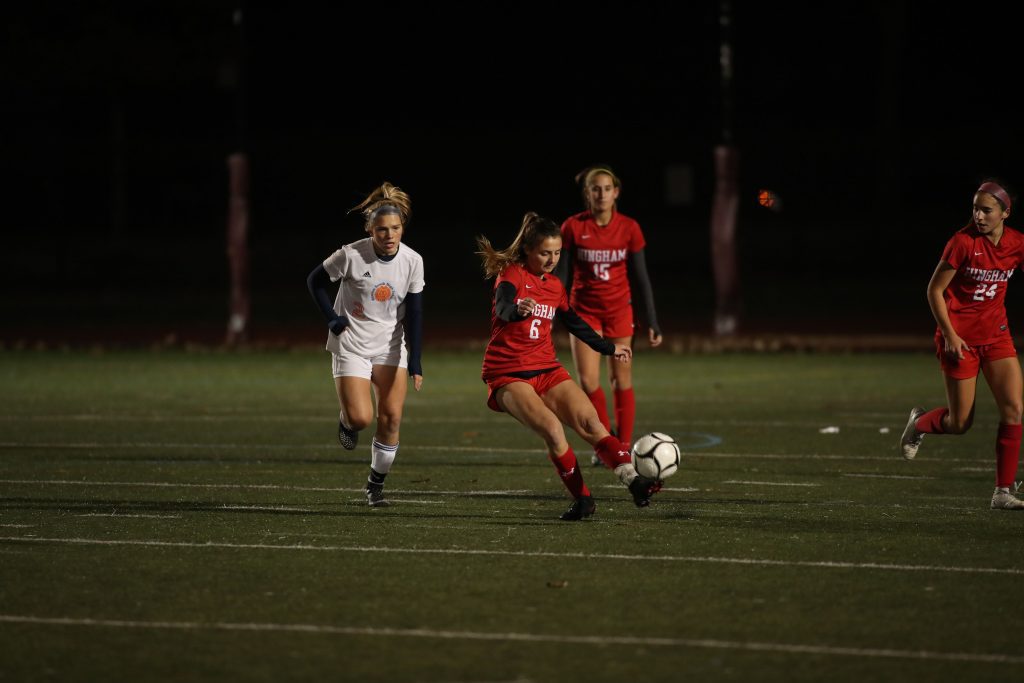 Junior Maddie Aughe clearing the ball out of her end. 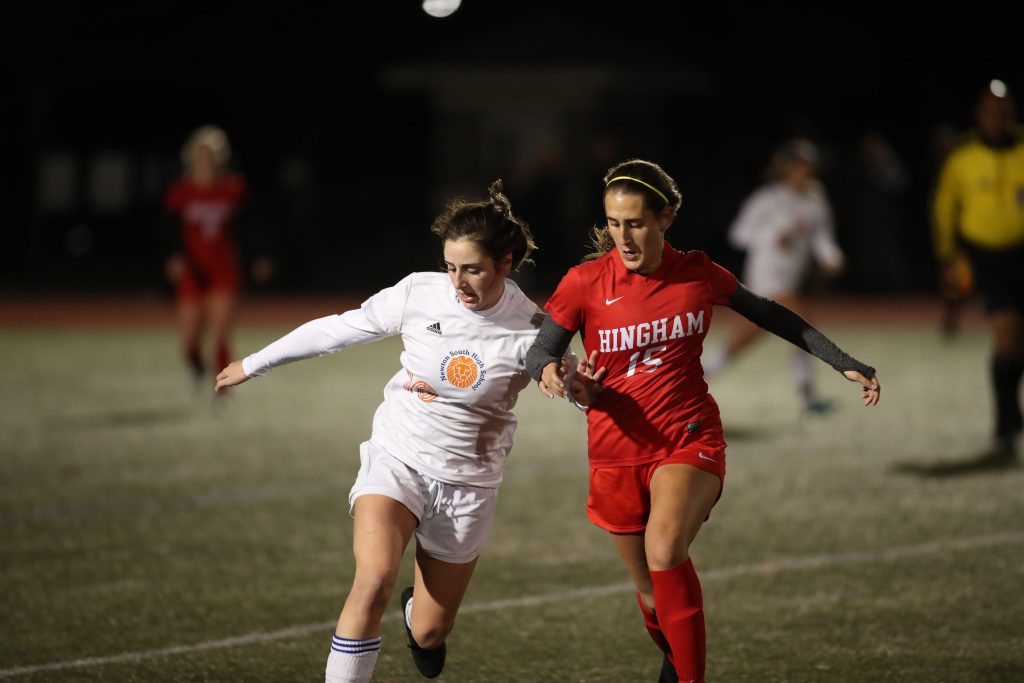 Senior captain Alexa Varholak battles for position and the ball against a Newton South player. 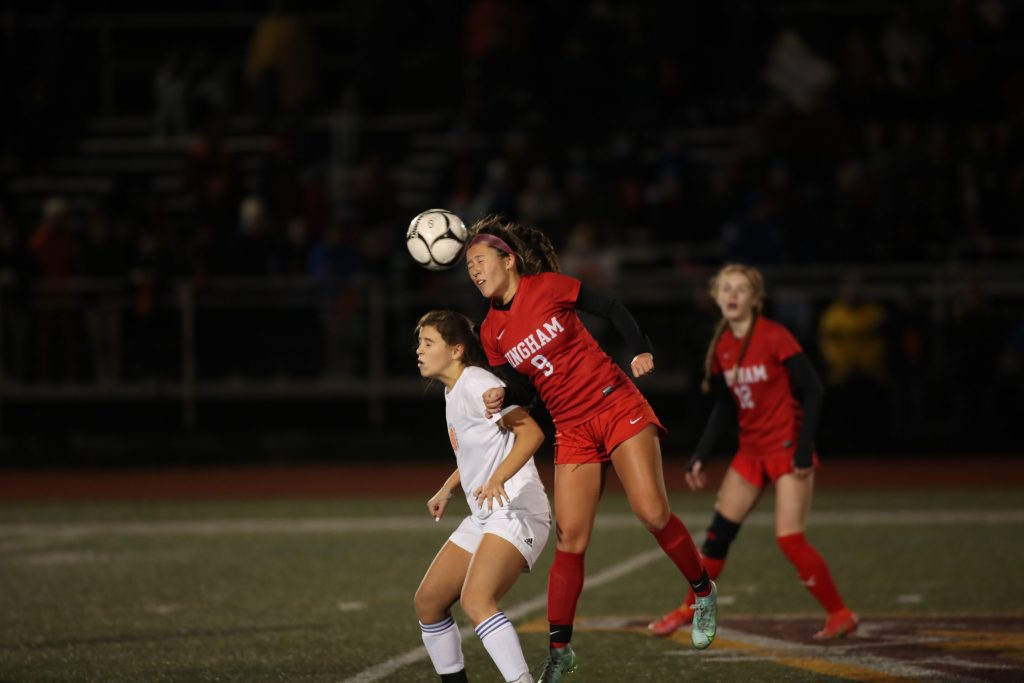 Senior Riley Cotter lets nothing by her at midfield. 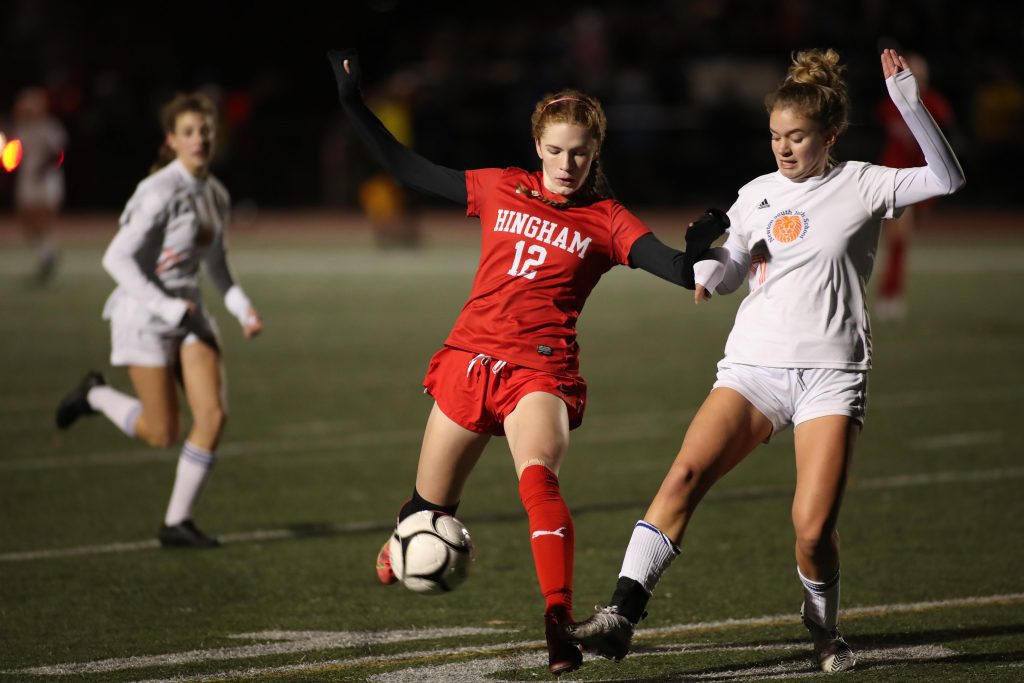 Sophomore Claire Murray continues to impress and improve every game. 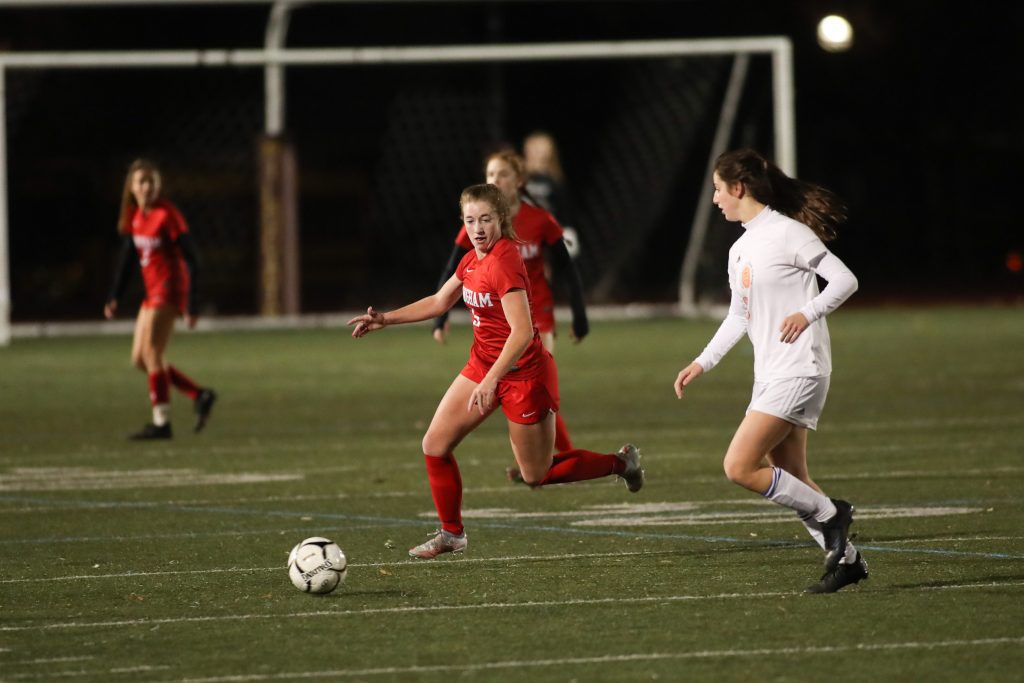 Senior captain Ava Maguire had 1 of Hingham's four goals on the night. 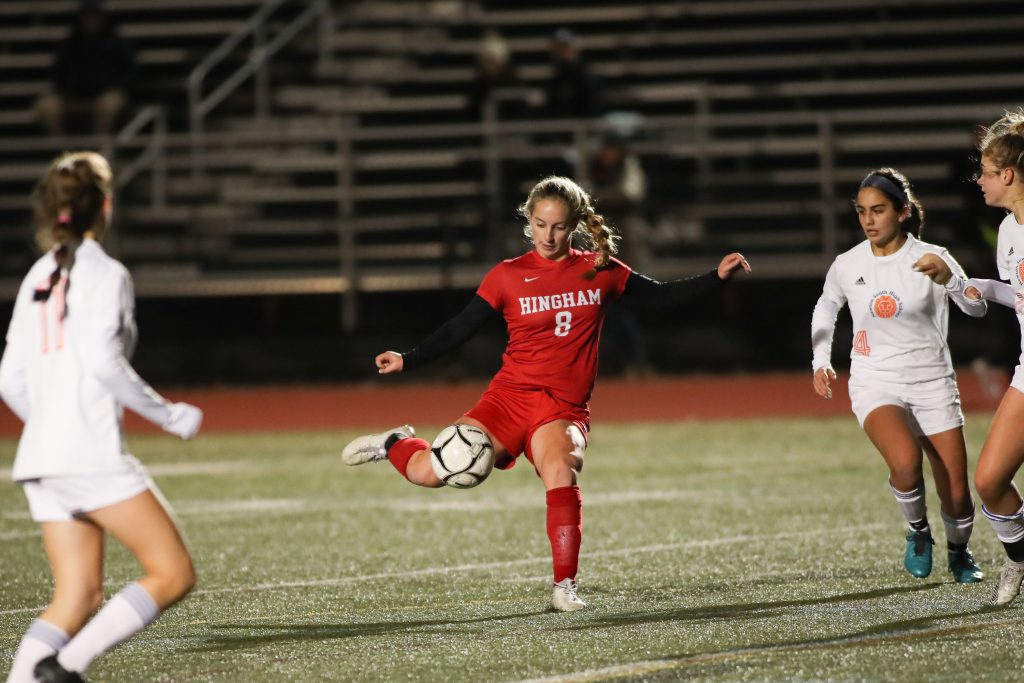 Patriot League MVP, junior Sophie Reale was mostly left 1:1 this game allowing her to make big plays throughout the game. 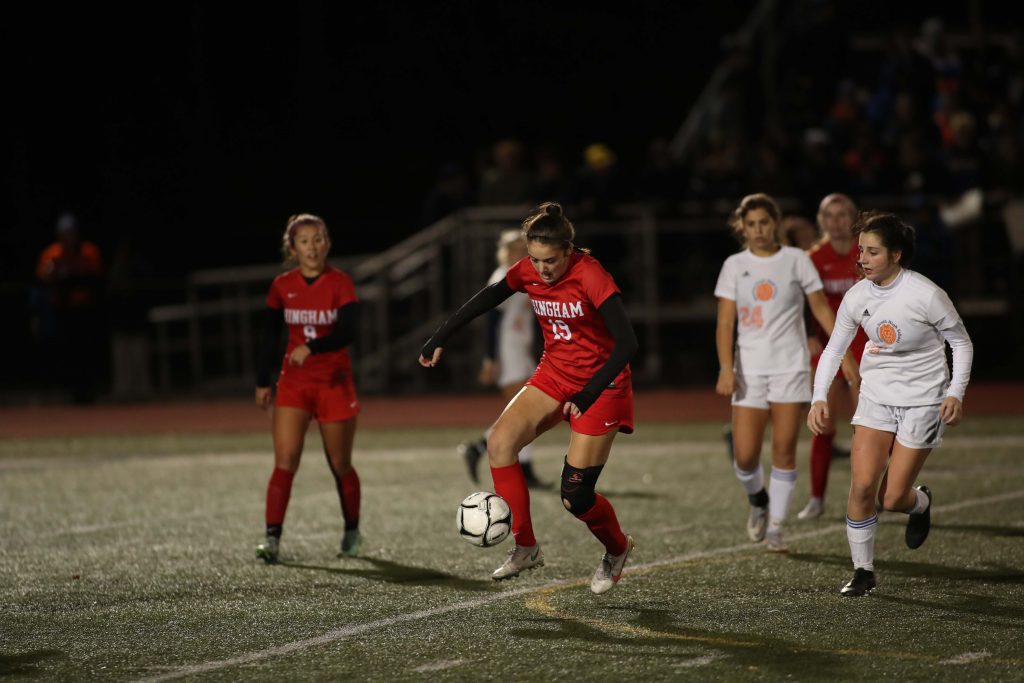 Senior captain Alex Higgins still putting the pressure on late in the game.