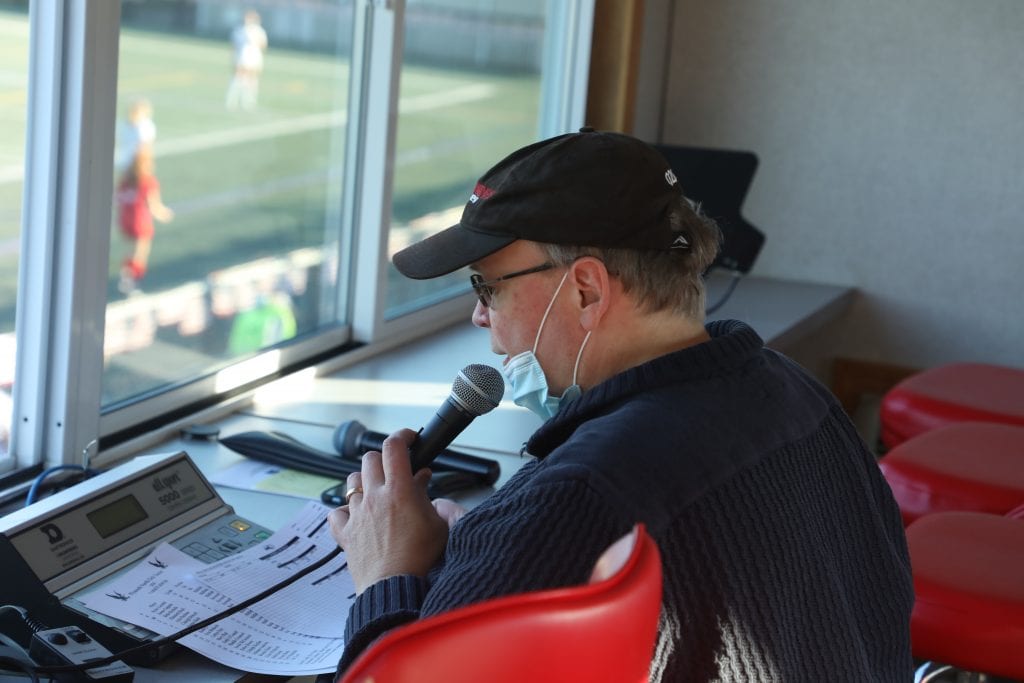 Whether it's high up in the booth at the multi-use field, court-side at a basketball game, or crammed into the announcer's box at Pilgrim Ice Rink, you'll find Greg Partyka in his element. He is the father of three Hingham High graduates (Kathleen '08 and twins Matthew and Caroline '15) and has lived in Hingham for the past 20 years after moving here from western Mass with his wife, Maureen. By day he is a managing director of a technologies firm, but by late afternoon/early evening he is the voice of the Harbormen and women as the HHS Sports volunteer PA announcer. His dedication has not gone unnoticed; Greg was recently awarded the MIAA District 3 Joao Rodrigues Award for Most Outstanding Volunteer in the district.

How long have you been calling games for Hingham High School?

"The volunteer work began in 2007 with Coach Dave Hickey and Harborwomen Basketball. I was assisting Kathleen as a statistician. I actually began calling games with the advent of the multi-purpose in October 2013."

How did you get started as a public address announcer?

“It was actually by accident and the chaos of opening day at the multi-purpose field. My daughter Caroline performed the National Anthem at the first event in the venue, a field hockey contest. Traditionally, after field hockey, homecoming continues with two soccer matches followed by football. In the rush to complete the venue, the training on the scoreboard had been overlooked. Since I was in the press box for my daughter's performance and knew how to operate scoreboards, I stepped in to reconfigure the scoreboard for soccer and then football. As the first fall season continued, I was the one person who knew how to reconfigure and time the various events. Eventually, as time went by, the game presentation (voice overs) were added. The following spring, the multi-purpose field hosted Lacrosse for the first time. This was a sport I knew very little about, but I knew how to configure the board. Hence add Lacrosse to the list of events.”

What sports do you call?

“In the fall it's Field Hockey, Boys and Girls Soccer and I handle the scoreboard for Football (Bob Kniffen is the Public Address announcer). In the winter, Boys and Girls Hockey, Wrestling, Girls Basketball (home and away), and the occasional Boys Basketball game when there isn't a conflict with the girls. In the spring, its Boys and Girls Lacrosse, Baseball, and over the years, I have worked a softball game or two.

I also have worked Rugby. While the team plays its matches at Derby Academy, the Rugby Senior Night 2019 was held in the rain at the multi-purpose field. We discovered the scoreboard does support Rugby, and it was a blast to work and call the match.

It should be noted that it’s not just varsity events. If schedule combines Freshmen and Junior Varsity, then a day is comprised of multiple contests.”

Do you have a favorite sport to announce?

“I would answer this question in two ways. As an event, there is nothing more rewarding than HHS Homecoming. The day starts bright and early and generally ends under the lights. It is amazing to see the generations of the town residents that return to the various events. There are always unplanned events that will pop up on the agenda.

Second is a MIAA basketball tournament game (boys or girls) in our "little" gym. With the advent of the model high school, all the new gyms are located in the same part of the building and other than colors on the floor, they are all the same. In late February, imagine our cozy gym packed with fans (including standing room). The noise and electricity that is generated from the crowd is amazing. Communicating with your partners at the table and the game officials is a challenge. Working a game in that environment is very special.”

Is there one game or one play over your career that stands out to you?

“Tuesday, March 8, 2016. Massasoit Community College. Hingham 50 Westwood 48 (Girls Basketball) Haley Blasetti's game-winning, driving layup to send the Harborwomen to their first Sectional Final in school history. Hingham has numerous State Championships in Hockey, Lacrosse, and Soccer (don't forget the Football Super Bowl appearance in 2007). However, Basketball not so much. That one shot, that one moment, redefined what Basketball is in this town.

One other memorable moment was the evening in 2018 when the Boston Cannons hosted Atlanta at HHS. I had the pleasure of handling the public address and working with Cannon's production team. It brought back many memories of my days broadcasting Crusader Basketball and Hockey on WCHC-FM in Worcester aka Holy Cross College Radio. ”

What does it mean to win the Joao Rodrigues award?

"It’s overwhelming. While attending Holy Cross, the Jesuits emphasized the life lesson of service to others. Since graduation, my wife and I (both Crusaders) have attempted to live that lesson. Volunteerism and giving back has been and will continue to be a cornerstone in our lives.

I wasn’t aware the MIAA honored volunteers. As I have learned more about the Joao Rodrigues and his work at Old Rochester, I am truly humbled.

It’s an honor to represent my adopted home town, Hingham High School, the other member schools of the Patriot League and MIAA District 3."

What's your favorite spot in Hingham?

“The Harbor. I enjoy a trip to Bathing Beach and just sitting in my car looking out at the water. There is something special about our sheltered harbor.”

Where is your favorite place to eat in Hingham?