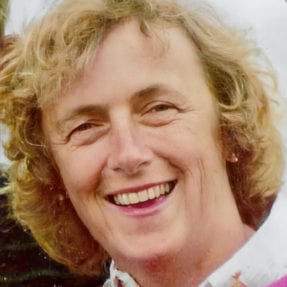 Susanne (Parker) Caira, 87, of Plymouth, MA died peacefully in her sleep on April 21, 2021 at the Pat Roche Hospice House in Hingham. Sue was born on July 28, 1933, in Patterson, NJ, to William H. Parker, a renowned studio photographer, and Clara (Heister) Parker. Raised in Madison, NJ, Sue went off to Endicott Junior College in Beverly, MA, where she met and fell in love with Robert Caira, her future husband. The two were married while Bob, a former Air Force Sergeant, was attending the University of Notre Dame on the G.I. Bill.

While living in South Bend, Sue had her first two children. In 1958, Sue and the family moved back to her hometown of Madison, and there she would give birth to another two. After six years of raising her children in Madison, Sue moved the family again, this time to Hingham, MA—a town she would call home for three decades—an easy commute for Bob, who had taken a job with the Bank of Boston. Sue spent her early days in Hingham taking care of their four children and a houseful of pets. A devoted mother, she played an active role in her children’s lives: shuttling the kids to afterschool sports and activities, serving as a cub-scout den mother, pitching in on paper routes, helping with homework, bandaging countless scrapes and bruises, and laying down the law of the house. Later, for nearly 20 years, she taught at Wilder Memorial Nursery School, inaugurating the educational journeys of a generation of schoolchildren.

In 1997, when her children were grown and had children of their own, Sue and Bob retired to Cape Cod. Sue figured largely in the lives of her eight grandchildren, making road trips to see them at sporting matches, graduations, and other milestone events. In 2013, she and Bob moved to Pine Hills in Plymouth, MA, where, in her 80’s, she embraced social media and kept in touch with family and friends by texts and emails.

Sue was truly a people person. She had a large circle of friends and loved to strike up conversations with nearly everyone; it was obvious to all that she cared deeply for her family and friends. Her smile was warm and ready, and even in her later years she was universally liked and praised for her kindness and her interest in others.

Sue was pre-deceased by her husband Bob and her daughter Robin. She is survived by her sister Lynne (Eldridge), her sons Jeff (Sylvia) and Greg (Kristen), and her daughter Karen Staples, as well as eight grandchildren: Jeff’s sons Trevor, Ryan and Nicholas; Greg’s children Christopher, Michael, and Cailin; and Karen’s daughters Courtney and Michelle.

The family will hold a private graveside service and, later this year, a celebration of Sue’s life. In lieu of flowers, donations may be made in Sue’s memory to St. Jude Children’s Research Hospital, 501 St. Jude Place, Memphis, TN 38105 or the Pat Roche Hospice Home, 86 Turkey Hill Lane, Hingham, MA 02043.

Although we cannot gather with Susanne’s family at this time, family and friends may still offer their support by clicking the link above and sharing a special memory or message.