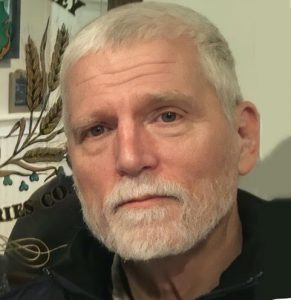 Gregory L. Tucker of Hingham, MA died on September 1, 2020.  He is survived by his wife Sally Cole Tucker; his son Benjamin Cole Tucker, Ben’s wife Megan Harper, and grandson Ethan Harper of San Diego, California; his brother Kenneth Tucker and wife Kathy of Norton; his sister Janet Conroy and husband Kevin of Wrentham; his sister Anne Belliveau of Franklin; his brother Brian Tucker and wife Lynn of Stoughton; numerous cousins, nieces and nephews; and many friends.

Born in Norwood, MA, Greg attended Xaverian Brothers High School, going on to receive his bachelor’s degree from The University of Massachusetts Amherst.  He also earned a Master of Music in Composition from Boston University where he met his wife Sally who was pursuing her Master’s degree in Flute Performance. Greg wrote a number of wonderful pieces of music while at Boston University and afterwards, a number of which can be heard on his SoundCloud page.

Following his time at Boston University, Greg spent a long, productive career at MIT’s Media Lab where he served as Facilities Manager, retiring in 2015. Greg was particularly proud of his contribution to the construction of the MIT Media Lab Complex opened in 2009, which involved much enjoyed trips to Japan to consult with Maki and Associates, the architects for the project.

A skilled pianist and guitarist, Greg continued to perform throughout his life, often accompanying his wife Sally on flute.  After discovering the rich local scene in traditional Irish music, Greg quickly proved himself a skilled backer on guitar and was a welcome participant in local sessions, playing regularly at both The Snug in Hingham and The Tinker’s Son in Norwell.

Greg was an avid outdoorsman and enjoyed hiking and backpacking in all conditions and seasons, from the heat of the Nevada desert to the 20 below cold of the Adirondacks.  In recent years, he came to appreciate more and more the intimate beauty of places close to his Hingham home, particularly the Trustees’ properties at Turkey Hill and World’s End, and in warmer weather could often be found plying local coastal waters and rivers in his kayak.

There will be a small, private meeting of the family at this time; a remembrance and celebration of Greg’s life will be held at a later date for all friends and colleagues to attend. Although there is no gathering at this time, you may still offer your support by sharing a special memory or message at www.Keohane.com.

The family requests that in lieu of flowers, donations can be made to The Trustees of Reservations, Doctors Without Borders, or the charity of your choice.