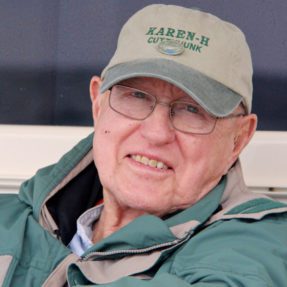 Peter Lehner, of Hingham, 99, on February 19, 2022, well into his 100th year, Peter Lehner died peacefully at his home in Hingham, MA with his family around him.

During World War II, he served as a Captain in the US Army Corps of Engineers and was a member of the Underwater Demolition Team in the Pacific Theater.

Like so many of his generation, his education was interrupted to serve his country. In 1949, he graduated with a degree in mechanical engineering from MIT.

Peter had one sibling, Philip, whom he loved deeply. They were truly life-long best friends. Together, through the hard work and talent of their teammates, these brothers built the family business, Leigh Fibers, into the industry leader in fiber recycling in North America.

He was preceded in death by his beloved wife, Mary and his brother, Philip.

A family man, businessman, engineer, Army officer, and a Cuttyhunk fishing guide who earned his Captain’s license at the relatively youthful age of 75, Peter was a man of many passions, talents and interests. Whether raising a family, building the family business, or fishing with the occasional handmade lure, Peter, as all his many friends and relatives can attest, was a man of purpose, dedication, and care. Up to the end of his very long, rich, and full life, he strove to learn, to do, and give back. He will be greatly missed by those who had the true gift of knowing him.

The family would like to express particular thanks and gratitude to the caregivers who helped Pete reach his centennial year, especially, Stacey Gardner and Mike Ward.

A Celebration of Life Graveside Service & Military Honors will be celebrated on Saturday, May 14, 2022 at 11 AM in St. Paul’s Cemetery, 114 Hersey St., Hingham.