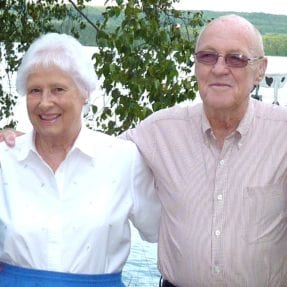 Olin was born on July 22, 1932 in St. Albans, VT, son of the late Laurel Erseldine Samson, M.D. and Rachel (Hall) Samson and grew up in Franklin, VT. Beloved husband of 60 years to Coralyn (Whiting) Samson of Winchester, MA. Coralyn was born on March 12, 1934 in Portland, ME; the daughter of the late Walbridge O. Whiting and Helen (Mudgett) Whiting and the sister of the late Wanda Whiting Robinson and her late husband, James V. Robinson. Olin was the loving brother of the late Martha Smith and her husband Vernon, and David Samson and his life partner, Frank Langevin. Cherished father of Laurel Samson Starks of Humarock, MA and Kimberly Samson of Chestnut Hill, MA. Olin (Doc) is survived by his son-in-law, Keith Starks, and Kimberly’s spouse, Folsom Patterson. Devoted grandfather of Alexandra and Katlyn Bean (children of Kim Samson and Ned Bean) and Lyndsey and Tyler Starks (children of Laurel and Keith Starks). He is also survived by loving nieces and nephews, Kathi (Smith) Samson, Christopher Smith and Leland Smith, John Robinson, and the late Andrew Robinson.

Doc graduated from University of Vermont Medical school in 1958 and practiced internal medicine as a physician from 1963-1991. He began his career at Beverly Hospital in Beverly, MA and then spent many years at Hunt Memorial Hospital where he served as chief of Staff and later was on the Board of Trustees at Hunt Memorial Hospital in Danvers, MA before retiring in 1991. Coralyn (Lyn) spent all her summers at Lake Carmi where she met Doc. Lyn and Doc married on August 25, 1956 and she taught school in Burlington, VT. After medical school, Doc became a Captain in the Army and together they were stationed in White Sands, NM between 1959 and 1961. After moving to Danvers, Doc set up his medical practice and Lyn worked as the business manager. Lyn became an active volunteer in the community (Hunt Memorial Aid Association, Parent Teachers’ Association, Girl Scouts) while she and Doc raised their children. After he and Lyn retired they split their time between their homes in Dunedin, FL and Franklin, VT. They had a summer camp next to one owned by Lyn’s parents on the Westcott Shore of Lake Carmi. Their 60 years there were part of a five generation legacy of camping at the lake. Doc loved woodworking and was always involved in a project at the camps. Doc and Lyn enjoyed playing with their grandchildren at Lake Carmi. Doc also enjoyed playing golf, boating and hunting. In the 1990’s, Doc and Lyn enjoyed traveling in their RV. After Lyn died, Doc moved to Hingham to be closer to his family. Doc was known and loved as a physician for his compassionate bedside manner. He was easy going, funny, and kind to his family, friends, and his patients. Lyn was known for her “no nonsense” attitude and her love for family. They will be greatly missed by all who knew them. Both will be buried in Wildwood Cemetery, Winchester, MA at a private service this summer. Donations in the names of Olin and Lyn Samson can be made to the Franklin Fire Department, PO Box 172, Franklin, VT 05457.