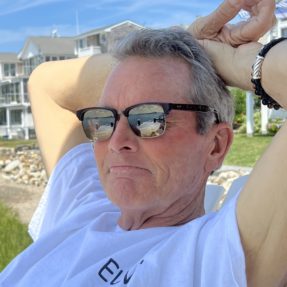 Michael James Nally of Hingham died July 24, 2022 peacefully at home after a brief struggle with Cancer surrounded by his family with the salt air and the sound of the ocean in the background. He was 61 years old.

Michael was born on February 6, 1961 in Salem, MA to parents Joseph A. Nally and Margaret (Bane) Nally. He graduated from Hingham High School in 1979 and attended Wentworth Institute of Technology.

He is survived by his beloved wife Jennifer (Sullivan) Nally. His sons Michael Ryan and his wife Leah (Homan), Conor Canning and his fiancé Rachel Lus and Collin James and his girlfriend, Ryann Bailey to whom he was a devoted father and friend. His step children Casey, Jack and Shane Sullivan whom he absolutely adored. He was the beloved brother of Martin Nally, sister-in-law Cheryl(Craven), Joseph Nally and his partner Debbie Henry, his sisters Catherine (Nally) Mirra, Ellen (Nally) Brown and her husband Edward and many nieces and nephews.

He was pre-deceased by his parents, his brother Patrick Nally and his first wife and mom to his boys , Flora Elizabeth (Canning) Nally.

Michael was a lifelong Hingham resident where he raised his boys and spent countless hours on the ocean. He shared his love for boating, skiing and loving life every single day with friends and family.

He spent 35 years in a fulfilling career with many roles in Marine Construction up and down the East Coast.

Most recently he returned to his neighborhood of crow point and built his dream home where he could smell the ocean and watch the sunset every day!

Relatives and friends are respectfully invited to greet the family during the visiting hours on Thursday 4-8 PM in the Pyne Keohane Funeral Home, 21 Emerald St. (off Central St.), HINGHAM. A Celebration of Life Service will be held in the funeral home at 9:30 AM on Friday prior to the Funeral Mass in St. Paul’s Church, Hingham at 10:30 AM. Burial at St. Paul’s Cemetery.