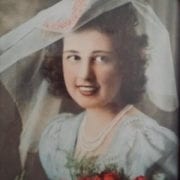 Lillian M. (Brown) Manning passed away peacefully on August 9, 2020, just a month shy of her 102nd birthday. This is the first time her age has been publicly revealed–a secret she kept safe with Estée Lauder face cream and decades of dodging the question.

A graduate of Mission Church School in Roxbury, Lillian was a life-long Massachusetts resident. During World War II she served as secretary to an Adjutant General and in June of 1945 she wed U.S. Army First Sergeant Gerald W. Manning. They were married 63 years before his death in 2008.

The Mannings settled at Five Corners in Braintree where they raised three children. Lillian was a proud employee of Jordan Marsh, later Macy’s, long enough to be presented with the highly-coveted Lifetime Discount; this was a mistake on Macy’s part, one that Lillian exploited for the rest of her life. Her calendar revolved around the sale schedule and she became an expert at combining coupons with her discount to achieve the best price. Macy’s earnings have never fully recovered. The results of this lifelong affair with the Ladies Department were an impressive wardrobe and an expansive collection of costume jewelry. For Lillian, there was no such thing as being overdressed–she favored diamonds, animal prints, and red nail polish. She was a firecracker: brightly colored and sparkling.

Lillian was a world traveler and exercised her gift of gab across the globe. She loved to tell a joke, but never at another’s expense. She liked parties, small children, and dogs–but rarely all at once and absolutely never in her own home. She disliked vegetables, having her picture taken, and elevators. She had an infectious laugh and a smile that warmed you from the inside out. Lillian was electric and the light of her love shone brightest on her family.

Lillian is preceded in death by her husband Gerald, her son G. Robert Manning, and four siblings; she is survived by her brother Arthur Brown of Phoenix, Arizona, daughter Barbara Webster of Plymouth, son Richard Manning of Norwell, five grandchildren, and seven great-grandchildren.

In lieu of flowers, please dress for dinner tonight: it’s what she would have done.

Lillian will be profoundly missed by all who loved her–but her family is comforted by the knowledge that should we ever wish to see her again, we need only to put a cold drink on her dining room table without a coaster and she’ll float right down from Heaven to have a word.