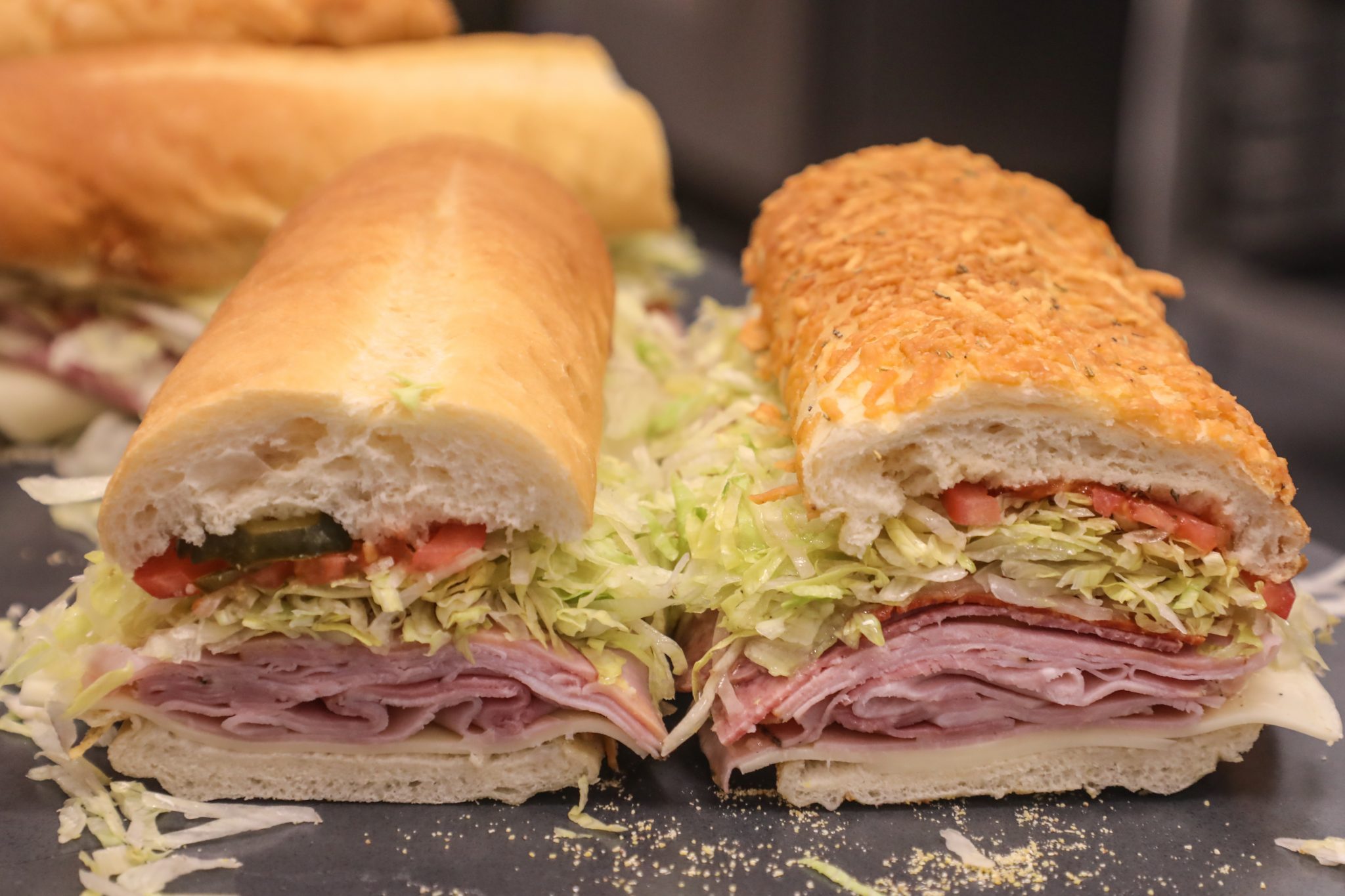 The Italian bread used to make the subs is baked fresh in-house several times a day, and the sandwiches are prepared right in front of customers.

"The high-quality, ingredients we use are the difference-maker," franchise owner Bob Quinlan -- who is in the Hingham shop a few days a week -- told the Hingham Anchor. "The vegetables are prepared fresh every morning, and the meats and cheese are sliced right onto each individual sandwich." 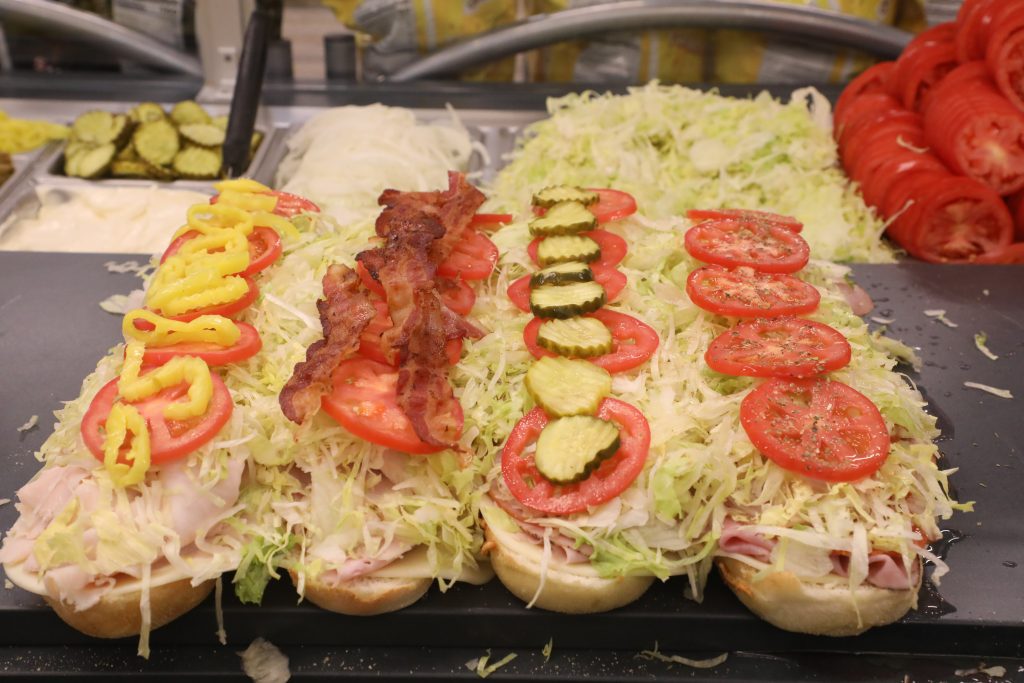 The name "Jersey Mike's" comes from the original "Mike's Subs" shop that opened at Point Pleasant on the Jersey Shore in the mid-1950s, at a time when the "submarine sandwich" was a relatively new item in American society.

The company's tagline is to be a "Sub Above," which refers to "being the best we can possibly be in everything we do," according to Quinlan.

"We offer quality service and high standards of cleanliness -- everything to make this a top-notch shop and to create a fun atmosphere," he said. 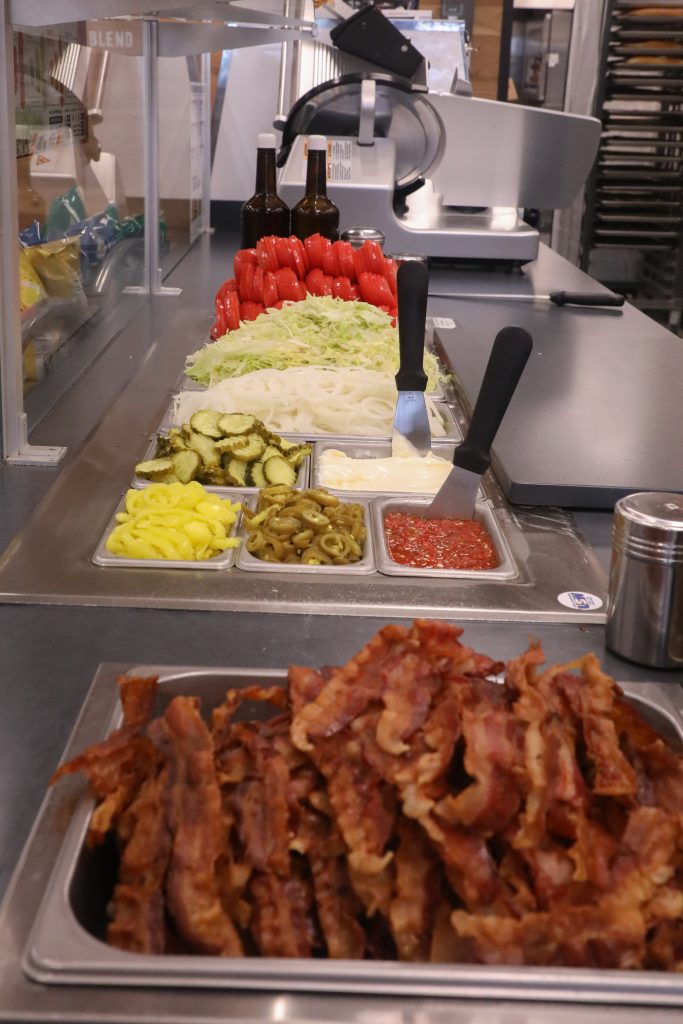 Flavor that can't be beat

There's something for everyone in the Hingham shop -- from cold and hot subs to kid's meals and meal deals.

For those who like to go without the bread, there's the "Sub in a Tub" -- their favorite menu item served on a bed of lettuce.

Customers often top off their meal with David's cookies and brownies or a Udi's gluten-free treat. Gluten-free bread is also available. 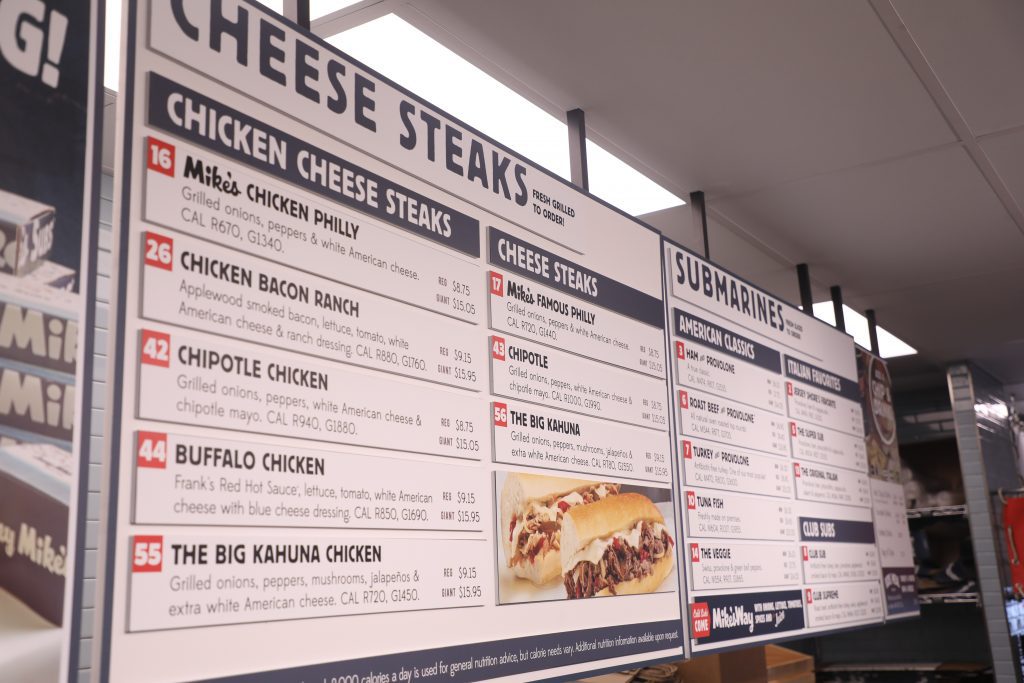 Jersey Mike's offers inside seating, takeout, and delivery. "It's a nice, casual place, with a Jersey Shore theme -- complete with a surfboard with lights hanging from the ceiling -- and everything is served with a smile," Quinlan said. "It's all about offering a very pleasant experience to our customers."

The Hingham Jersey Mike's employees a good number of Hingham teens and is managed by Maryanne Chipman, who Quinlan called "awesome."

Quinlan explained how the opening of the Hingham shop came about. "My wife comes from the Jersey Shore, and during a trip there to visit family, we had such a great experience at Jersey Mike's that I inquired about franchise opportunities," Quinlan recalls.

There was already a Jersey Mike's in Hanover, so he chose Hingham Plaza as the next South Shore location. "It's a busy spot and near the ocean," he explained.

The customers -- including regulars at the shop -- are friendly and appreciate the high values held by Jersey Mike's, Quinlan said. "We're passionate about what we do. Customers go out of their way to tell us what a pleasant experience they had with us. It's a great team." 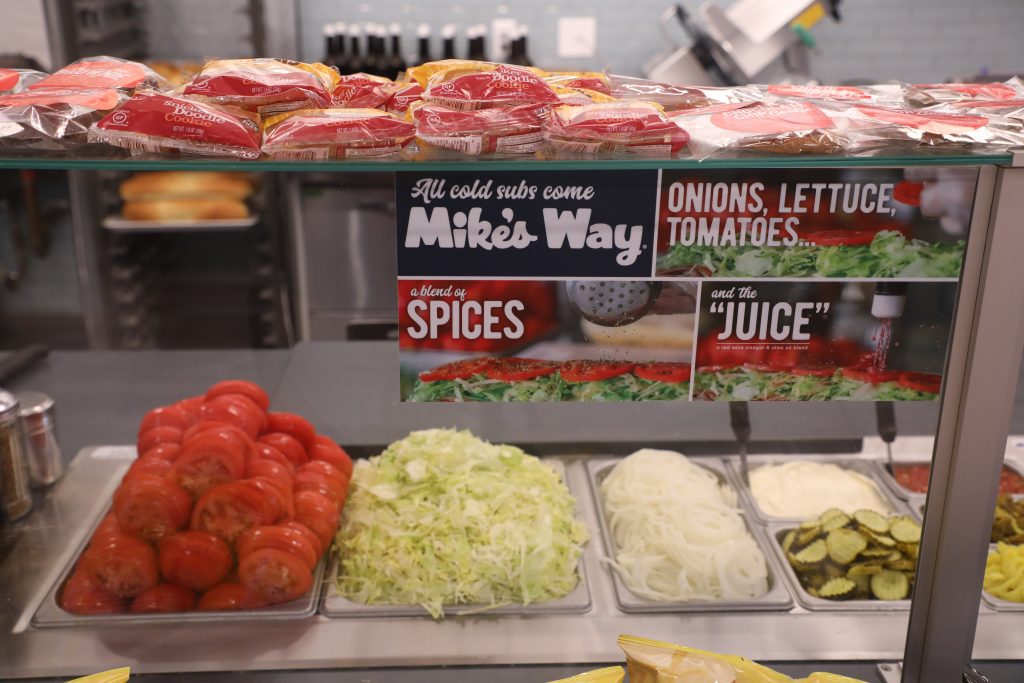 Giving back to the community

In addition to preparing sandwiches made fresh to order, Jersey Mike's is big on giving back to the community. The Hingham shop sponsors Hingham Little League teams and hosts fundraisers for local organizations (such as the Hingham High School Athletic Department when the shop first opened last May) and more recently -- on a broader scale -- a fundraiser for the United States Tennis Association Foundation. "It's all about making a difference in people's lives every day," Quinlan said. 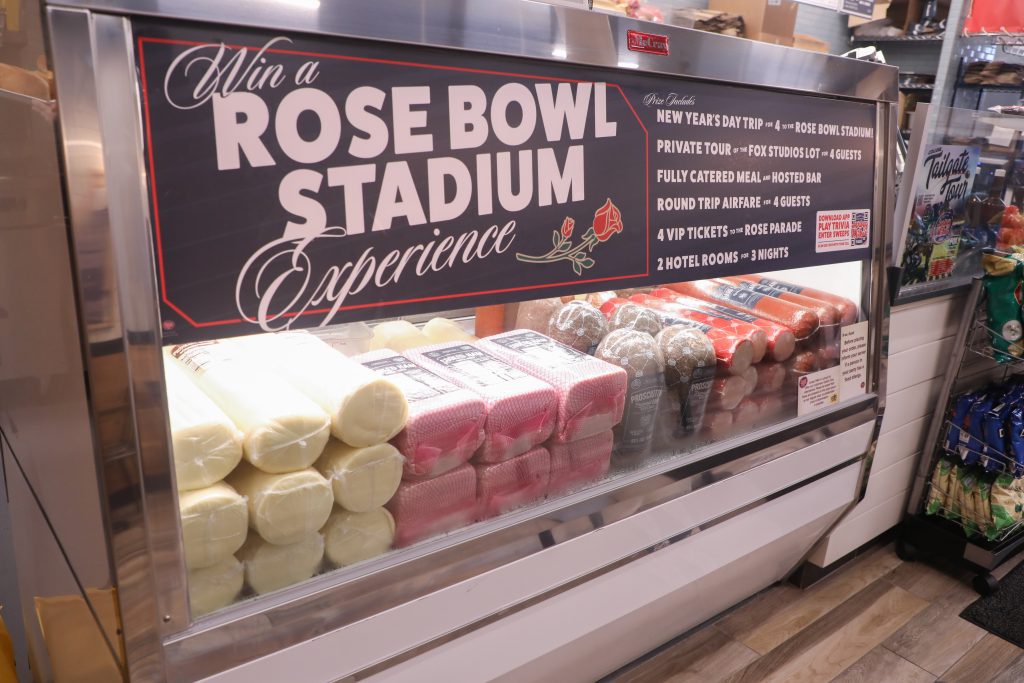 Jersey Mike's has an interesting history. In 1971 -- 15 years after Mike's Subs first opened on the Jersey Shore -- Point Pleasant high school student Peter Cancro began working there at the age of 14. He had a particular love for authentic submarine sandwiches and for working in the shop.

When the ambitious Cancro overheard the owners discussing selling the business when he was a senior, he considered buying the shop. After sharing his idea with his football coach -- who happened to be a banker -- he backed Cancro's loan.

From there Cancro eventually expanded upon the successful Mike's Subs business model and opened a couple of local outlets. He began franchising by popular demand in 1987, changing the name to "Jersey Mike's Subs" to capture the authenticity of where the original sub sandwich was born.

In the mid-eighties, summer visitors expressed to Cancro how much they would miss his subs when they left the Point Pleasant area. Some even picked up several giant subs wrapped for travel to bring back to their winter homes across the country. 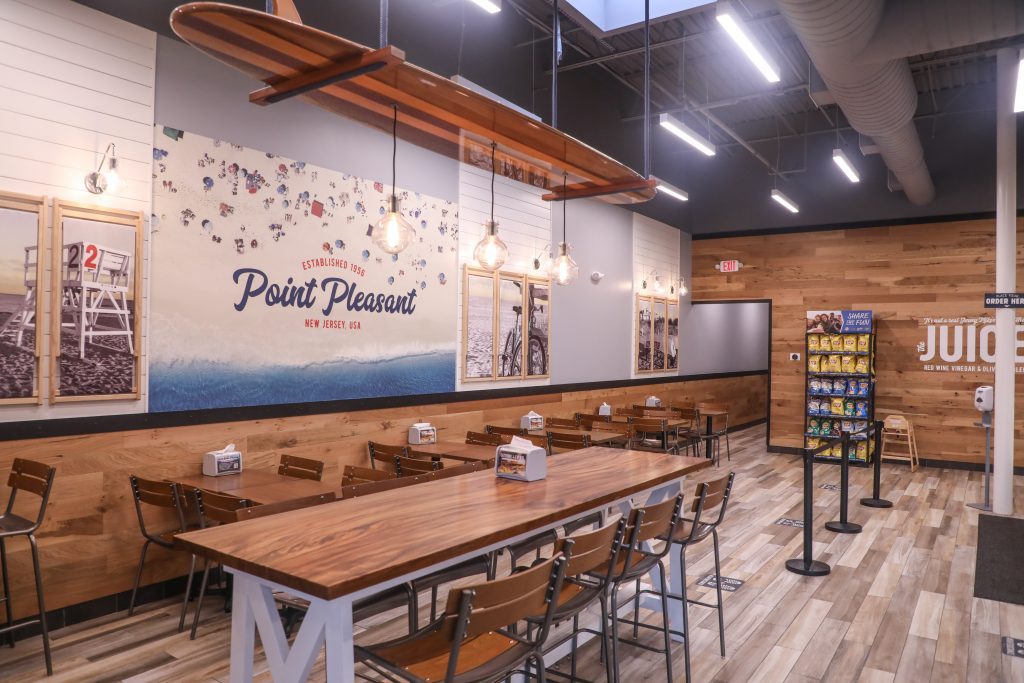 Today Cancro is CEO of Jersey Mike's Franchise Systems, Inc., overseeing more than 2,000 locations that are either open or under development. That said, he still enjoys testing his skills behind the counter and showing his passion for the product and Jersey Mike's customers.

For more information about Jersey Mike's or to order online from the Hingham shop, visit www.jerseymikes.com. The phone number there is (781) 630-5100.

Do you have an event or party coming up? Jersey Mike's catering service offers menu choices that include individually-wrapped subs by the box, subs by the bag,  personal boxed lunches, and cookie and brownie trays for the finishing touch.