Dr. Gary Maestas, Ed.D., who was recently named interim superintendent of the Hingham Public Schools, greatly enjoys touring around on his Harley-Davidson and rebuilding crashed cars in his spare time, but his main focus is education.

Maestas -- who served as Superintendent of Plymouth Public Schools from 2008 until his retirement in 2020 -- replaces Supt. of Schools Paul Austin, who resigned effective July 30.

"From the time I was age six, I wanted to be a teacher," he told the Hingham Anchor. "I've always liked working with and helping kids."

After being employed as an industrial engineer in New Mexico, where he grew up, Maestas desired to go back to college (after taking a break) and was encouraged by his boss to do so.  He majored in technology education, applying his electronics background to his studies, which he said gave him "a lot of energy."

From there he went on to serve in many different positions in the education field.

Maestas' starting date has not yet been negotiated because he first needs to "navigate the state retirement system," he explained. That said, he is eager to start his one-year stint as interim superintendent as soon as possible. "The clock is ticking."

This is Maestas' first time in an interim superintendent role. "I never planned to do this, but I received a call from the School Committee chair -- my name was referred to her -- asking if I was interested in applying for the position," he recalled.

One of Maestas' first priorities is learning as much as he can about what's going on in the HPS -- what works, the challenges that exist, and other information.

"Covid is a very unusual time to be in education because there are so many challenges, expectations, and unknowns -- with so many directives and so much guidance," he said.

"One of the things we need to do relatively quickly is to give the community a sense of where things are going for the new school year -- to just make sense of it all and to move forward."

Whether living on the West or the East Coast, everyone is dealing with the same types of issues, he noted.

"There are people on both sides of the debate around Covid vaccinations, face masks, and what we should and shouldn't do," Maestas said. "We need to come up with a model that is best for our students, drawing upon the best possible guidance. That's what school administrators have been dealing with [during the past 18 months], and that's the position we'll be in again with school starting [in September]."

Among Maestas' main goals are to "add a level of stability" to the HPS and to assist in the process of finding a new superintendent -- to help prepare HPS so that the new permanent superintendent can step into that role and understand the district's priorities and to "feel that the school system is on a sure footing. It's incumbent on my time here and my abilities to try to do that," he said. "I would like nothing better than to leave this district [when his one year is up] with a great level of confidence that the new superintendent will take HPS to the place they want to be."

As part of his efforts to build relationships and trust among HPS staff, teachers, administrators, students, and parents, along with the entire community -- which is a high priority among School Committee members -- Maestas envisions himself in a position where he is considered to be a "family" member, rather than just a "visitor."

He also wants to leave a mark on the HPS so that "the work we did together will always be remembered. I want to leave the school system in good shape. I [want to assist with] hiring the best possible superintendent to lead HPS to where they should be in the next five years."

It takes at least that much time to get settled into a new school superintendent position -- to establish a sense of stability and trust -- according to Maestas. "The idea is that the HPS would be able to rely on that trust to bring about change," he said. "That's not to say that Hingham NEEDS to change, but Hingham is a progressive school district and it's important to find a way to keep that momentum going -- and that sometimes requires change."

What he's looking forward to the most is meeting the teachers and students. "That's my love," he said. "I really enjoy being in schools and classrooms. That's what I miss [now that he's officially retired]. . . . I want them to get to know me and to identify with me, from the littlest to the tallest [of the children]."

In his role of an educator, Maestas believes that every student has potential. "Each one has a whole different set of wants and desires and dreams, and we have to understand what those are and what motivates each student."

'We need to listen'

He also noted that teachers enter the field for their own individual reasons. "We need to take the time to listen to what motivates them to do their jobs -- what they like and don't like," Maestas said. "If they aren't able to realize their inner strength and if they aren't feeling valued and that they are progressing, then we have missed the mark."

He is currently the owner of the Marion Education consulting firm in Marion, Mass., where he makes his home with his family. His wife, Ruby, is an elementary school principal in Carver, and they have three grown children, Martin, Gary, and AJ.

"I'm extremely excited about serving in this capacity," Maestas said. "I love people and working with educators, and if I can take something off the plate of HPS [administrators and staff], I will be happy to do that."

In his spare time

While his role as an educator is top priority, he enjoys riding his Harley-Davidson and rebuilding cars that have been in crashes in his free time.

Maestas, his wife, and some friends rode the Blue Ridge Mountains for 1,500 miles in June, through parts of Virginia, the North and South Carolinas, and Tennessee.  "This is one of the most challenging motorcycle routes," he said. "These trips are good for my mental health!"

During Covid, Maestas -- who is a certified welder -- rebuilt three cars and is currently restoring a 1997 Jeep Wrangler. "I buy vehicles that are significantly damaged from dealers, tow yards, eBay, and other sources, take them apart, rebuild the engines, repaint the bodies, and do other work as needed," Maestas explained. "Once they are restored, I sell them or give them to my kids."

He shared a lesson he has learned in life. "If you can imagine [something], you can design and build it, whether it be a car or your life."

School Committee Chair Kerry Ni "has been wonderful to work with," he said. "She is so interested in doing the right thing and doing what works best [for the HPS]." 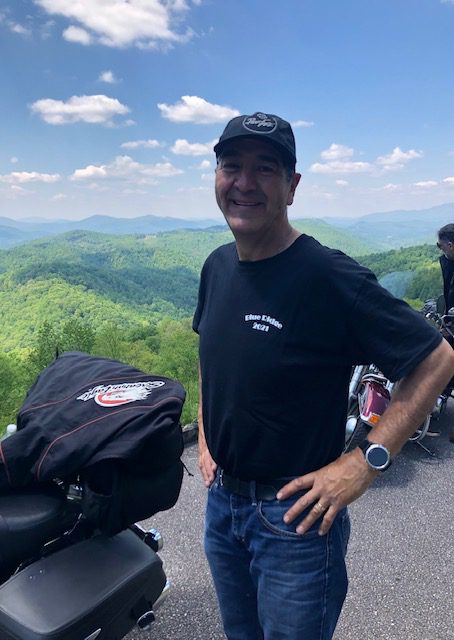 Ni had this to share about Maestas and his qualifications:

"The School Committee is very excited to work with Dr. Maestas over the 2021-2022 school year! There are a number of challenges facing our district: helping our students recover from the social/emotional and academic impact of a global pandemic, the budget, two Massachusetts School Building Authority (MSBA) building projects [Foster School and Plymouth River School windows], and our equity work, to name a few.

But to tackle any of those challenges, it is crucial that we focus on rebuilding relationships. The fear and uncertainty of this past year brought out the best and worst in our whole school community, and unfortunately did some damage. We are going to need to repair those relationships and rebuild trust between all of our stakeholders: students, teachers, staff, administrators, parents, the community, the School committee, because we all need to work together for our kids.

Dr. Maestas has a stellar reputation as a South Shore superintendent and a wealth of experience leading his district, building strong relationships with staff and families to ensure that all decisions are student-focused.

He also has experience working with the MSBA, which will be helpful as we work through the Foster and PRS projects.

We are fortunate that he has chosen to join us in Hingham because he has the knowledge, skill set, and experience to set up our district for a successful transition to our next permanent superintendent, and a successful future for our students."

1 thought on “Interim Superintendent Maestas: establishing a sense of stability and a foundation of trust”