Hingham resident Aaron Wong can't get enough of the Red Sox or the game of baseball.

In season, he operates the scoreboard at Fenway Park -- a challenging but exciting job. When his favorite team heads out of town for an away game, Wong can then turn his full attention to cheering them on from afar.

Wong recalls the pleasure he gained from attending many Red Sox games with his father as a young boy. "For the first couple of games, I was more interested in Wally the mascot, but around the 2003-2004 season, I really started to follow the game. I started having a passion for it," he told the Hingham Anchor.

"I've been interested in the Red Sox and baseball for 20 years," he remembers. "It's hard not to fall in love with the team."

Wong also has a passion for filmmaking. In fact, majoring in film studies at Boston University led to him landing a job in the Red Sox production department in 2017.

"I've been loving it ever since," according to Wong.

The production department handles the scoreboards and the videos that get played at Fenway Park during games and on social media. "With my filmmaking experience in college and my love for baseball, it felt like the perfect fit," he said.

When he first started working at Fenway Park, Wong filmed and edited Red Sox videos such as "This Day in Red Sox History," special moments during the games, and others. 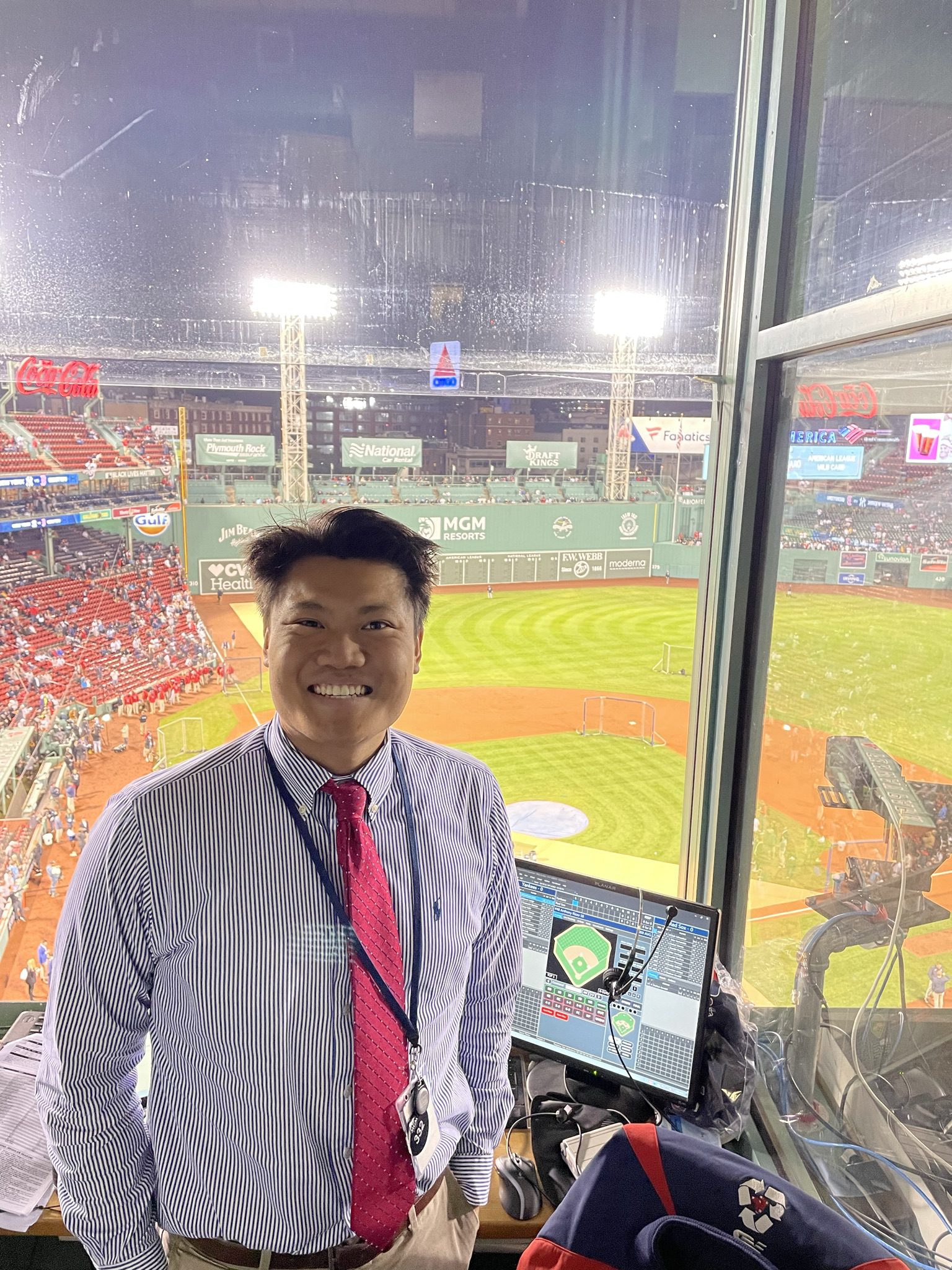 In his current role, he operates the scoreboard and also updates the team stats -- hitter's batting average, number of home runs and strikeouts so far in the season, and other interesting information -- from the control room.

"I need to stay focused on every single pitch and double check everything [before I post it]," Wong said. "While doing this is challenging, it's key to the spectators watching the game that everything is correct, and it's really the most fun part of the job."

There's a lot of pre-game preparation, he explained. "I write all the game notes for the players -- the fun facts that are displayed on the video board."

While he can't watch the games easily from the control room, his friends are often watching them outside in the park. "The Red Sox production team does a phenomenal job of putting on a show for every game -- the videos, scoreboard, and music -- it's the whole atmosphere [that makes being there such a great experience] -- from the smell of the grass, the hot dogs, and the peanuts to talking baseball with my colleagues. For me, there's nothing better to do on a summer's night," Wong said.

His favorite part of the job is being immersed in the energy among his colleagues and fans surrounding every game. "Sometimes it doesn't seem to matter if the Red Sox are winning or losing, because every game is so exciting -- you can feel the positive energy whether they win or lose," Wong said.

He works all the home games for the season -- which runs from April to October, longer if the Red Sox make the playoffs -- and special events during off-season, including football games around Thanksgiving time and hockey games in the winter. "The grounds crew is good at converting the baseball field to a football field or an ice rink," Wong said.

While he loves being part of the Boston scene, Wong looks forward to coming home to Hingham. "It's such a friendly atmosphere. Everyone has a smile on their face when they're walking down the street," he said. "The people and the community make it special."

This summer he enjoyed spending time in Hingham and being a spectator at his brother, Zachary's, Babe Ruth baseball games. "I love my job and baseball, and I recommend to any kid to make it to a Red Sox game this year or next!" Wong said.