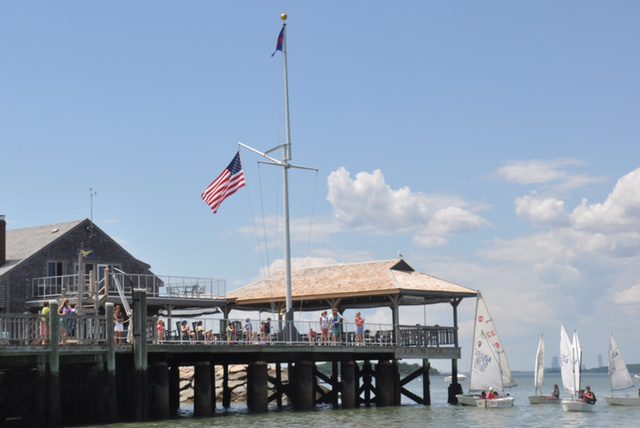 Situated on the northern tip of Crow Point with beautiful views of the harbor, Hingham Yacht Club -- which is celebrating its 125th anniversary this year -- fosters not only a shared love for sailing but also a deep sense of camaraderie among its 250 members, which include many families. 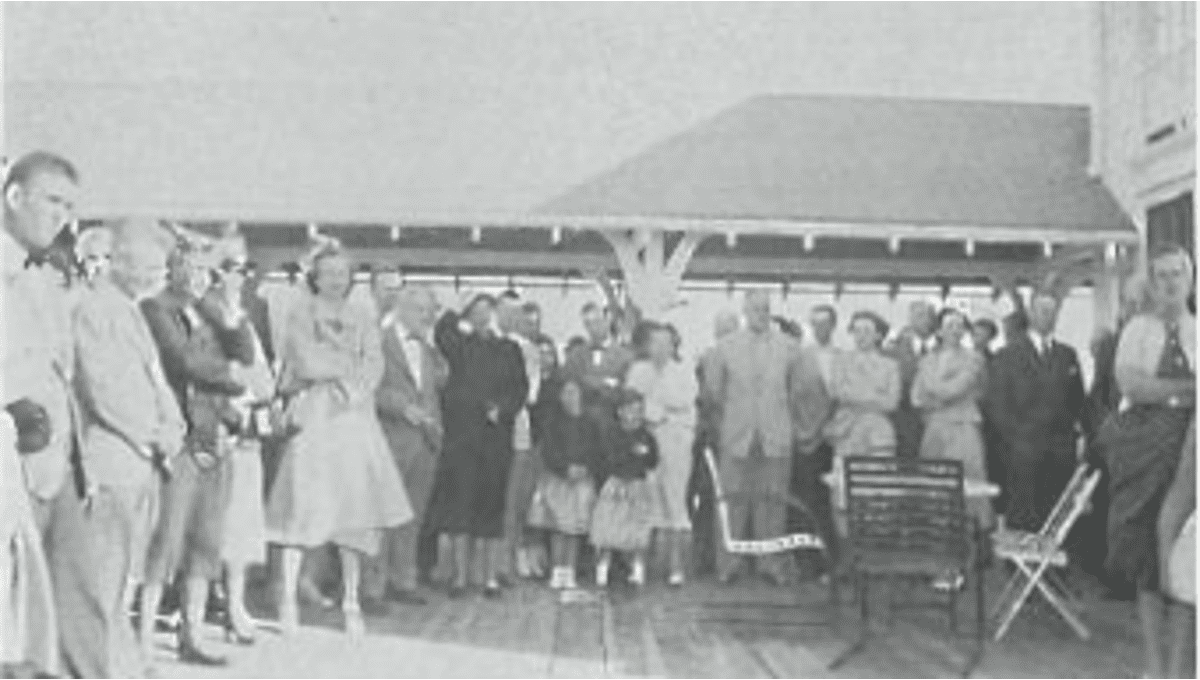 The Club -- which was established in 1895 -- operates from May to October, hosting many racing and social events such as fashion shows, cookouts, and Labor Day festivities as well as junior sailing and swimming programs.  In fact, HYC has the largest sailing program in Southeastern Massachusetts and is recognized for providing competition and hospitality to visiting yachtsmen.

"In the late 1800s, sailing was no longer a sport that only industrial barons could afford," HYC Commodore Chris Burns told the Hingham Anchor. HYC carries on that tradition.

Burns said that "everyone and anyone is welcome to apply." Doing so requires a sponsor who is a member of the club to make an application on behalf of the person/family who is interested in joining, along with other steps.

"The biggest benefit from membership is the social aspects and the [friendship], as well as the waterfront access and the spectacular views," Burns said. "There's a long waiting list."

Like many other organizations, HYC was affected by the pandemic but got creative. "Our junior sailing program went on when other camps in town were cancelled," he said. "Our kids got out on the water every day, with social distancing and other protocols in place." 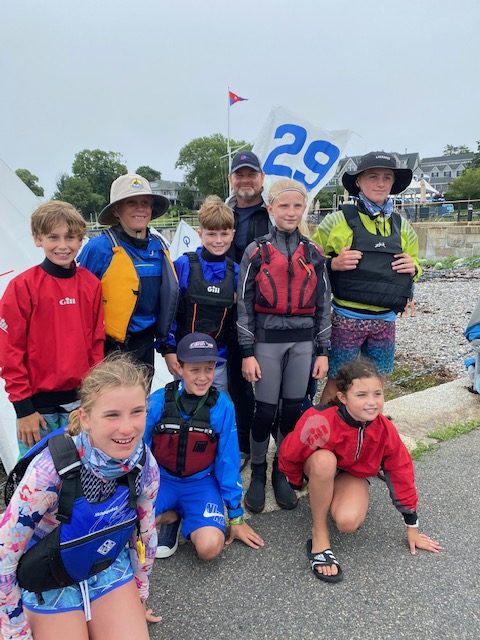 Looking back over the past century, Burns and other HYC members take pride in the fact that the club is still going strong despite its humble beginnings. "It's been a real success story," he said. "HYC has produced a number of great young sailors who develop a sense of self-confidence that carries them throughout their lives."

The Hingham Bay Junior Regatta attracts young sailors from near and far. During the past few years, the Club has hosted the national championships for the Rhodes 19 Fleet and the 210 Fleet, along with several regional championships. 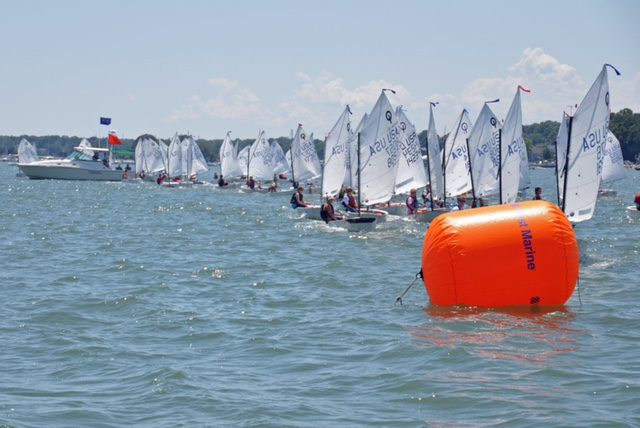 The Collins family have been members of HYC for nearly a century, and the tradition continues. Bill served on the executive committee for 27 years and as Commodore for the 100th anniversary celebration. He is currently chairman of the Race Committee.

"We are both lifetime members, belonging to the Club since we were born [more than 70 years ago]," his wife, Dar, said.

"Bill became a judge for US Sailing to give back to the sport," Dar said. "Five generations of our family have been active in the Club in the past."

Looking back, Bill's grandfather ran the Hingham Shipyard during wartime. He and his family lived in Quincy but belonged to HYC so Bill’s dad -- who was an only child --could learn how to sail and enjoy the sport. 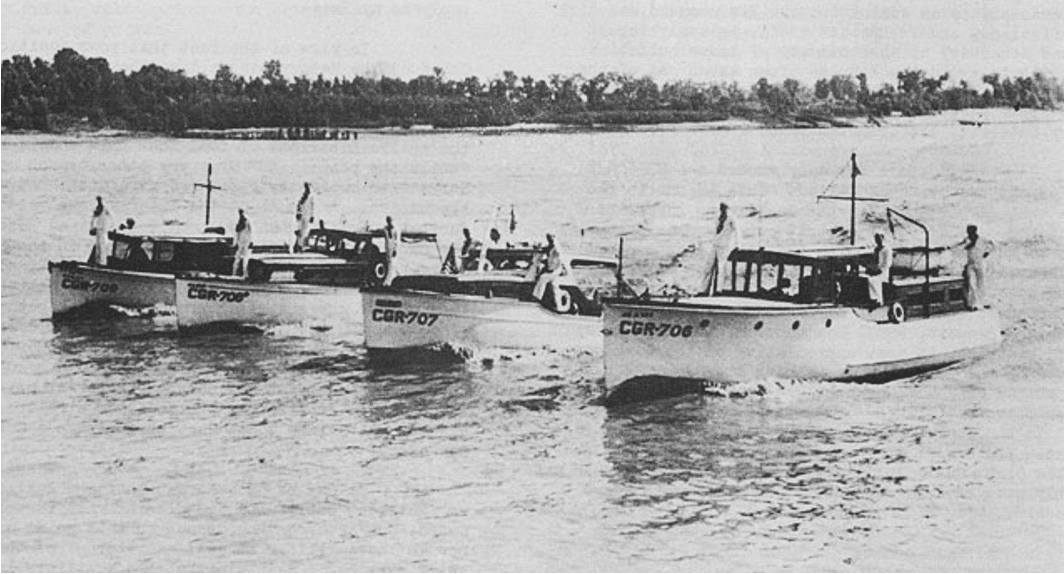 Bill said that while growing up in the Club and being involved with its management over the years, he has observed that it's a close-knit group of "a wide diversity of people."

Allie Koskinas, chair of the junior sailing program,  explained how the summer program for young sailors works. "After school gets out, we have about 100 children sailing and swimming," she said. "The junior program is a huge part of our Club, with kids of all ages interacting with one another."

HYC is "basically driven by families who care deeply about the sailing tradition and put a tremendous amount of effort into keeping our program going," she said.

For Koskinas, the HYC is the "most special place in Hingham. It's not fancy or ostentatious," she said.  "My family has made wonderful friendships here. It's a unique little spot that is definitely my favorite place in town."

Rindy Hesselman, chair of the entertainment committee, said the recent gala was the main celebration for the Club's anniversary. "We have many events for members throughout the season, and sometimes guests are invited."

Yacht club members enjoy many amenities, including a closed-off area for swimming in the harbor. "The Club is right on the water, and it's such an awesome jewel to have a dock and boat access to Hingham Harbor, along with so many sailing and boating opportunities for families to enjoy," Hesselman said.

HYC has an interesting history, established by a group of Harvard University undergraduates who were summer residents of Hingham. Their stated purpose was "to promote the interests of yachting in Hingham Bay and vicinity." 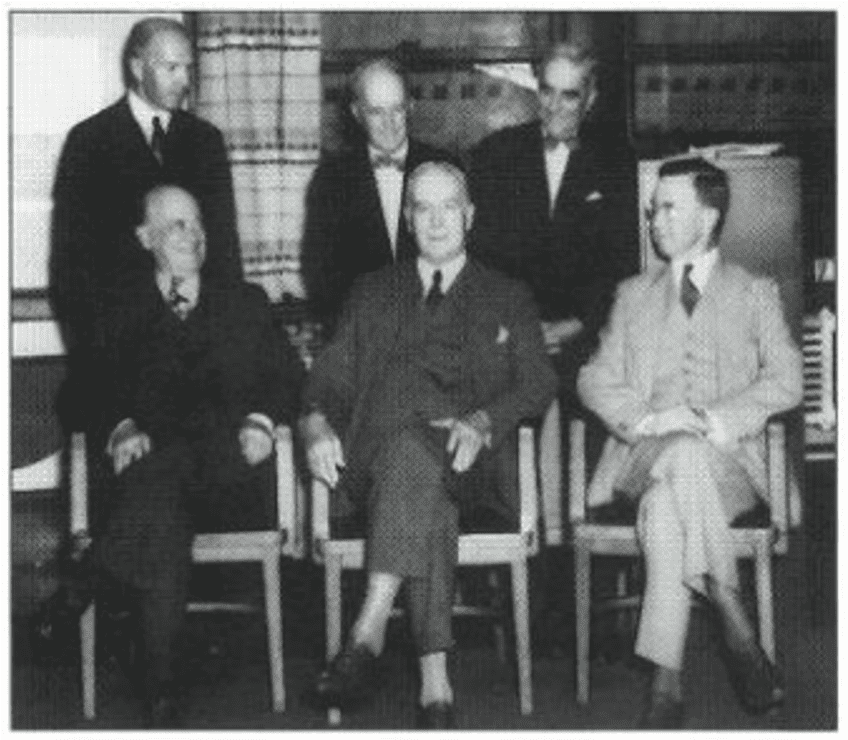 In May 1905, HYC members voted to lease land from the town to build a clubhouse. In 1928, the Club purchased its current site for $5,000 from the Nantasket Steamship Authority.

During World War II, HYC offered its facilities to aid in the war effort.

In 1963, the clubhouse was destroyed by fire and replaced with a more substantial structure. 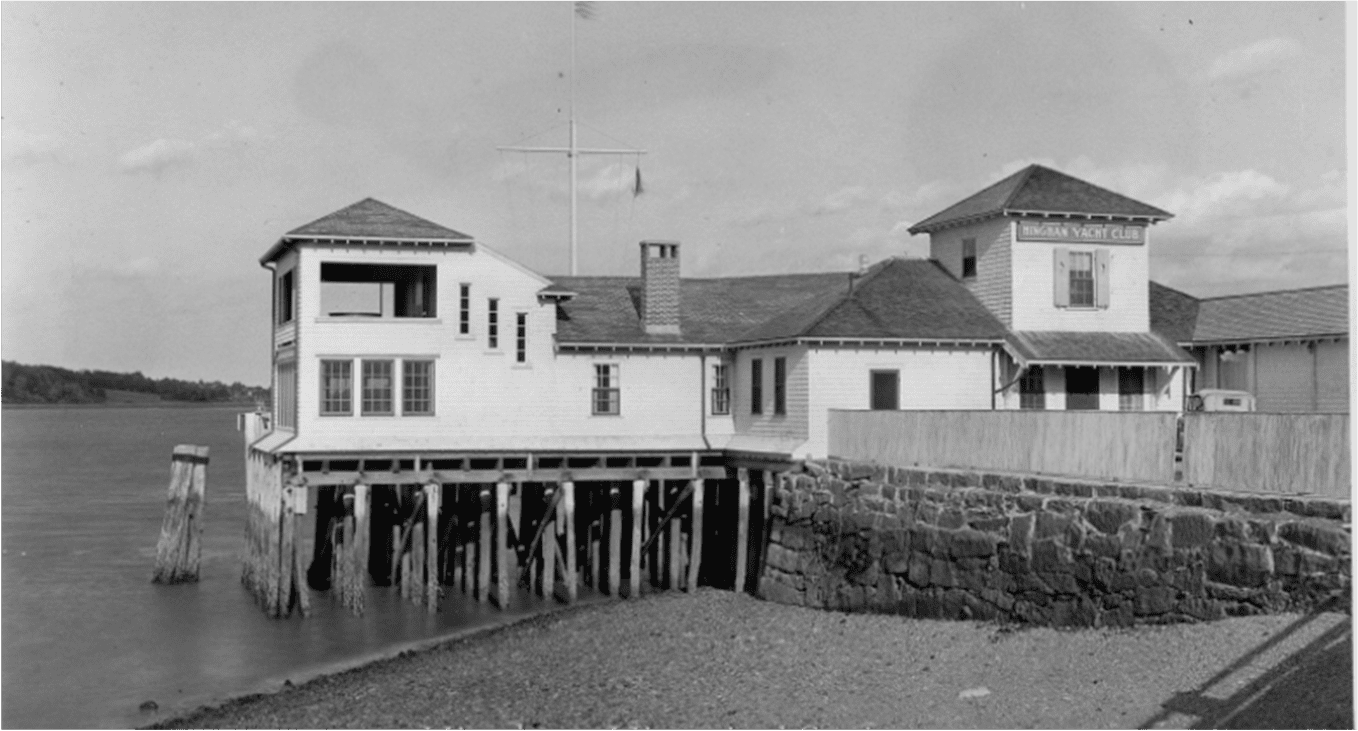 Heading into the fall, there's still plenty of good sailing weather left. "We will continue offering sailing for the kids before we close the Club for the season in mid-October," Bill said.

Looking toward the future, the Club will undergo a major renovation over the next five years. "It's a great group of people who are able to maintain an influx of new members, which keeps the organization fluid with new ideas and families, " Bill said. "The predominant number of members are young families." 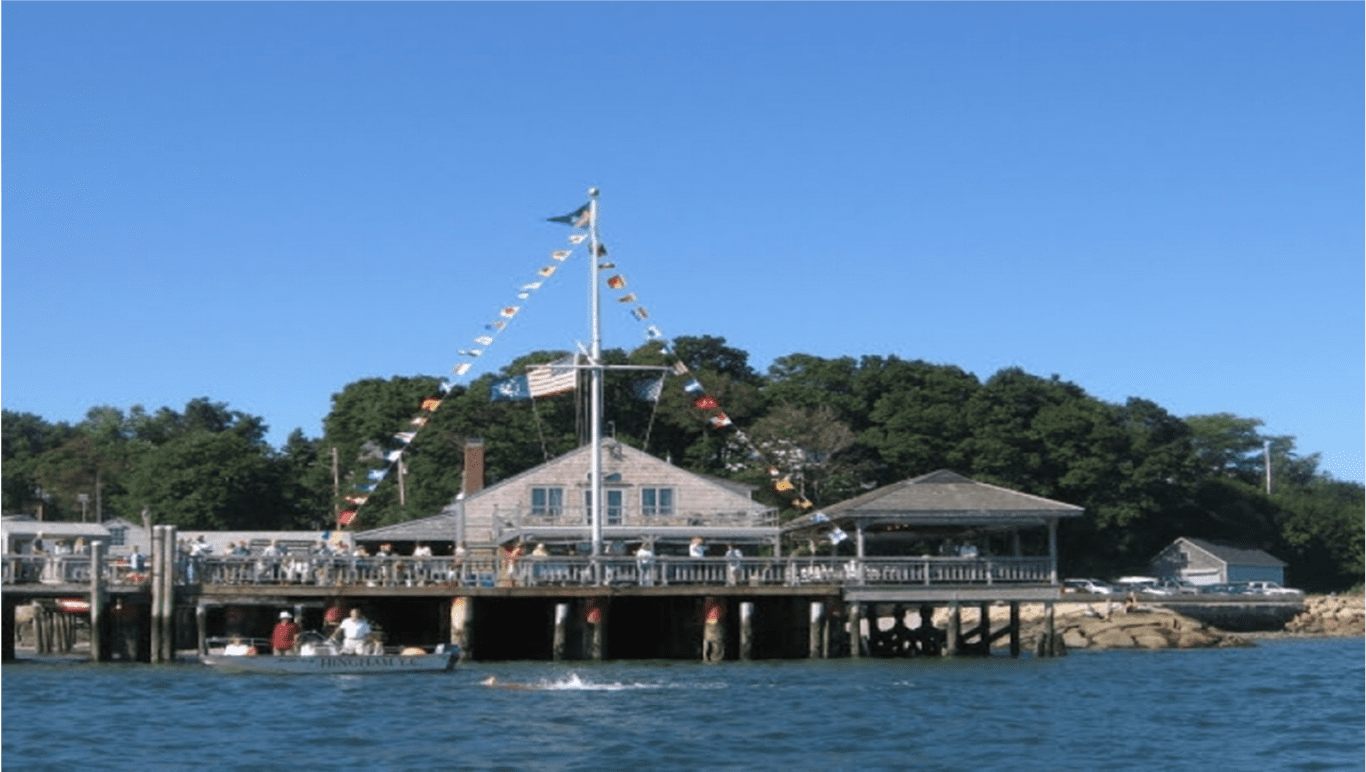 Burns noted that the idea behind the HYC clubhouse is to provide a "comfortable place for people who have an interest in boating to congregate," which is a large part of what makes the Club so popular.