The Hingham Police Department is participating in the annual "Home Base No Shave" campaign for the third year, spearheaded by Sgt. Brian Fernandes.

Home Base is a partnership between the Boston Red Sox and Massachusetts General Hospital that brings together first responders and community members to raise awareness and funds to pay for critical care for veterans.

Throughout the month of November, members of the HPD have committed to actively participating in this campaign, raising funds that will pay for life-saving care provided by Home Base to veterans and their families to help them heal from their invisible wounds, including post-traumatic stress and traumatic brain injury.

Each of the many participating HPD officers pledged to donate and/or fundraise $100 and to forgo shaving for the month of November and/or to wear a "No Shave" lapel pin to show support for the Home Base cause and to help break the stigma often associated with post-traumatic stress and other mental health issues some veterans experience.

Fernandes explained the HPD's involvement with the program to the Hingham Anchor. "The Hingham Police Department became aware of the 'No Shave' program as it began to spread throughout the South Shore police departments and the state in general," he said.  "Deputy Chief Ryan O’Shea took notice and got HPD involved because it was a fun way to raise money for a great cause."

Some officers donate the $100 and wear the pin but don't grow a beard, while others make a $100 donation and forgo shaving and also wear the pin. Female officers may participate if they wish by wearing a colored stripe in their hair.

Each officer has his own reasons for participating, but speaking for himself, Fernandes said it's because the campaign raises awareness and funds "to help veterans and their families cope with 'invisible wounds'" associated with their service.

"These men and women sacrificed so much, and it is only fitting that we try to help them in any way we can," Fernandes said. "There are also several members of HPD who are active or former service members,  and I think it's a great way to bring awareness to a cause that may hit home for them."

All police and corrections officers, firefighters, EMTs, dispatchers, and paramedics are encouraged to participate, along with members of the community, their family and friends, and local businesses.

On top of a $100 donation from each of these officers, there have been some anonymous contributions. As of Nov. 9, the HPD had raised a significant amount for this worthy cause.

"Raising any amount of money for such an important cause is always a positive, however, we would of course like to be able to increase the amount we have raised from year to year with hopefully more involvement from within the department and the community in 2021," Fernandes said. "So far we have raised $2,300, and we would like to keep that number growing throughout the month of November."

To date, the overall campaign has raised more than $1 million to pay for critical mental health and brain injury care for veterans, at no cost to them or their families. 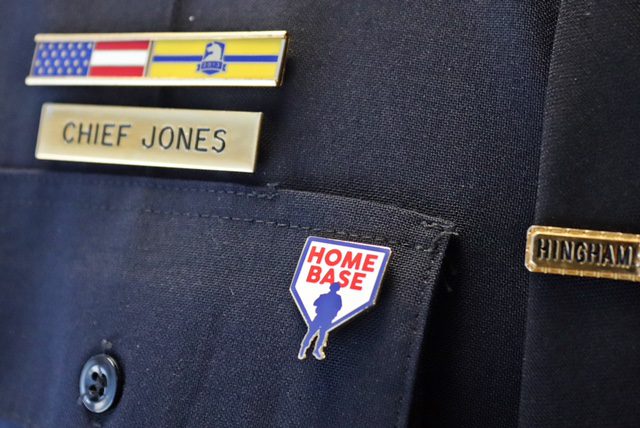 Citizens, local businesses, and others who are interested in making a donation as part of the HPD Home Base fundraising campaign may do so at
https://because.massgeneral.org/fundraiser/3538498

For further information about the program, visit https://because.massgeneral.org/campaign/2021-home-base-no-shave/c363104