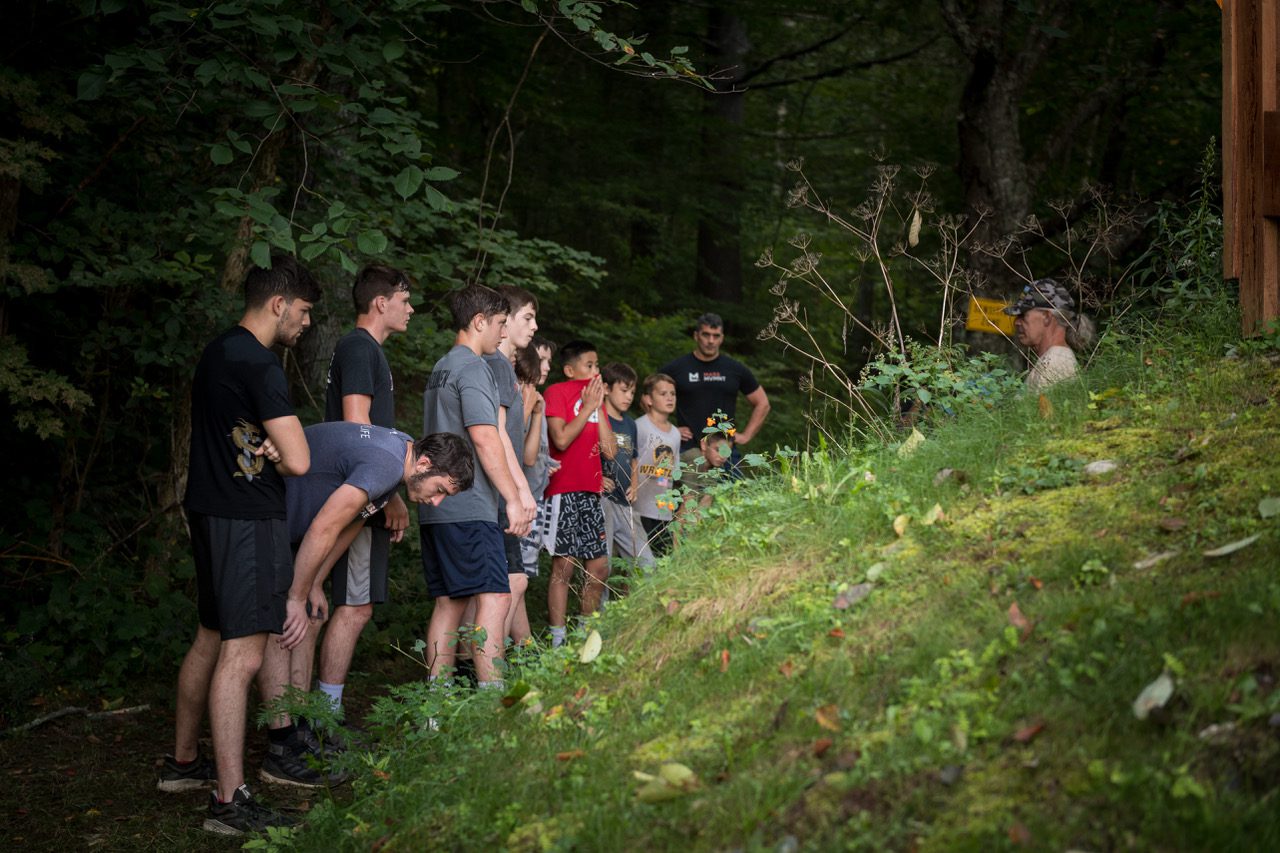 Wrestlers line up as they finish a mountain workout with their coaches at Camp Spartan in Pittsfield, VT.

Up in the gorgeous Green Mountains of Pittsfield, Vermont there is a beautiful farm nestled between an icy flowing river and picturesque mountain where young men and women are invited to challenge themselves physically and mentally to become better versions of themselves than they ever thought possible.

The 2021 Spartan Combat Folkstyle Wrestling Camp just concluded this past week, and “ according to Joe Tully, a veteran of Spartan Camps, one of the toughest”.

The camp boasts early morning workouts in the fields and mountains with combat veterans, strength and conditioning drills with elite fitness coaches, and multiple wrestling practices with olympic wrestling coaches and world champions.

The camp was founded by Spartan CEO Joe De Sena. Teaching children and adults the Spartan way of pushing beyond their comfort zones  is when improvement happens. He teaches how achievement occurs through pushing yourself and developing the right mindset and mental grit to get through some tough training sessions. It will not only benefit you physically but translates mentally to overcoming what life throws at you and not giving up.

As a Hingham Parent, I wish this camp existed years ago when I first moved here. This camp should be a requirement for graduation. I grew up outdoors. I spent days in the woods making trails to run and bike on, swinging from trees and building treehouses. We knew where our friends were by where their bikes were “kick standed” (or not) by the road. Raising my son in Hingham, I can see that we overprotect and sometimes it can make the kids soft. I want my child to be stronger.  As a generation of parents wanting our children to be better than ourselves, this camp is a great way for them to challenge themselves. When I heard the chatter about the Spartan camp, I had to encourage it, but it was ultimately up to my child. He had to do the work.  He had to choose to continue. I brought along my camera for a little documentary when I picked him on the last day. While I missed the morning work out of traversing the mountain three times before 8 am, I caught them coming down and going into wrestling and strength workouts. They aged from 8 to 17 years old with few scratches, a few blisters and covered in sweat. I could see on the faces of every one of the remaining, (yes, a few kids quit and went home) they earned their badge of honor through blood sweat, tears and perseverance. May God have mercy on their opponents after going through this because these Spartans will not.

I spoke with Hingham High wrestler, Aiden Parker, on his thoughts and experience.

What made you decide to go do this training?

“I heard about it from kids who went last year, they said don’t do it, it’s insane. But I wanted to see firsthand hand myself and have the experience to push myself and prove I could do it. There were several times it was really tough, but I never wanted to quit!”

“The morning was the most challenging part; I knew if I could get through that part I could get through the rest of the day. We wake up before sunrise began, got submerged neck deep in a cold river, instructed by Eric (combat Veteran) with everyone reciting Roosevelt's "The Man in the Arena".  It set the tone for the day. Then breaking into groups carrying various workout equipment carts with resistance to push, metal chains, kettle bells, and when we ran out of equipment, we carried large rocks to get up the mountain. We scaled the mountain and would stop for exercises that were synchronized and if a mistake by anyone in the team was made, we reset and tried again. We had to work hard by ourselves but also work together as a team. Making it up and down the mountain for time (which was a mile to the top), some days we would have to carry large rocks, other days trees, and we took turns leading. Eric (drill sergeant) would make sure we were working and moving to the best of our ability. No one wanted to be called out by him. Everyone wanted to be the hardest worker. If you were not and you were rude, you made us do more work. It was like the movie Full Metal Jacket, except they were not allowed back until they were truly apologetic and proved themself.”

“The next workout run by Hingham Strength and Conditioning Coach Mike Monarch, owner of Hingham’s Mass MVMNT.  He set us up with a 4 Tabata work outs consisting of various cross training workouts using sprints, kettle bells, battle ropes, and core slams, all types of carries, squats, and cleans. And that was just the start of the day before breakfast.  Afterwards we would have multiple wrestling practices through the day focusing on a technique, drills, then live wrestling.  Then there was lunch and recovery which was fun jumping off rocks and swimming in the river. Then more wrestling practice before dinner and campfires that included the campers discussing their experiences that were motivational and fun.”

Now that you completed the Spartan Camp experience, how do you feel it made you to be a better wrestler?

“The camp will help me become a better wrestler by refining my technique but most importantly taught me to push on when things seem impossible. It’s great to have the opportunity to contend with top level wrestlers. We were taught by them to push our bodies further than our mind think’s is possible. It proves we are capable of more than we thought. We are our own worst enemy when we think about giving up and we have to get out of our heads and challenge ourselves to keep going and fight to be better.”