Photography courtesy of Urbano Photo, on behalf of The Hingham Anchor

As part of a nationwide sunset candlelight vigil, about 120 people gathered at the Hingham Bathing Beach in the early evening last night, September 20,  to celebrate the legacy of the late Supreme Court Justice Ruth Bader Ginsburg and to mourn her recent passing. 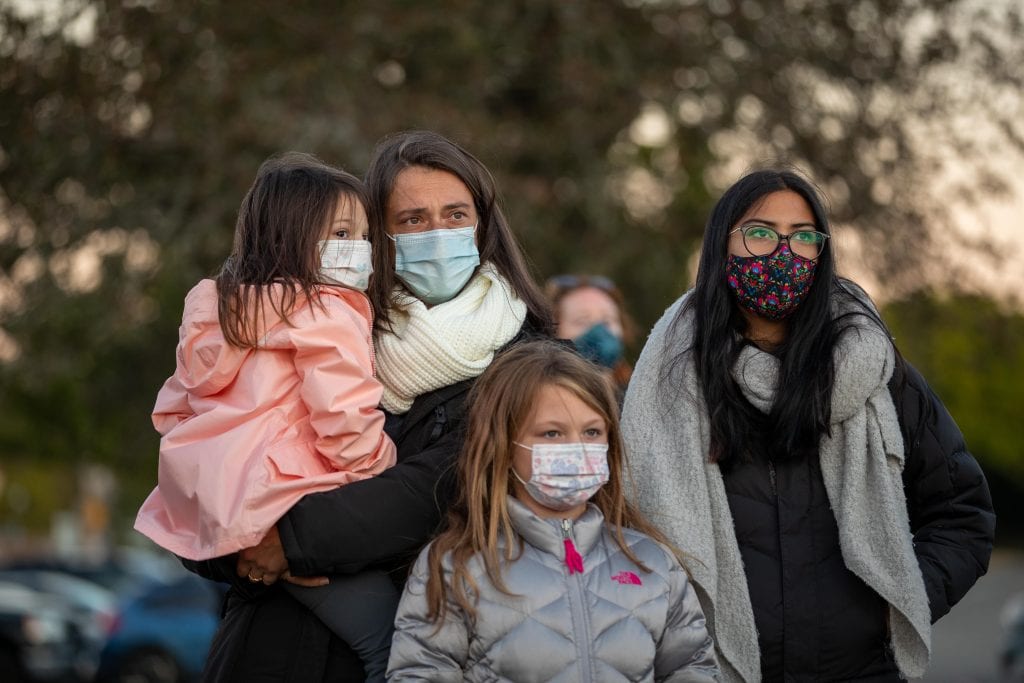 Smith shared with the Hingham Anchor her thoughts about the importance of honoring Justice Ginsburg at a local vigil. "Coming on the heels of so many national tragedies, in the midst of a pandemic, in a moment of massive social unrest, at a time when our country is more divided along ideological lines than ever, when the rights of women and minorities and the LGBTQ+ community are under attack, in maybe the most frightening hour many of us have ever known, the death of Ruth Bader Ginsburg still managed to rock us to our core," Smith said. "We knew that if we three were shaken, many more would be as well, and we would all need a place to go."

Those who attended brought their own flameless candles and stood in quiet contemplation during the 87 seconds of silence that reflected Justice Ginsburg's age at the time of her passing.In addition to the scheduled speakers, several other people also spoke when the members of the audience were invited to make remarks of their own. Correnti called Justice Ginsburg her "real life Wonder Woman, a feminist icon and trailblazer" in her comments during the vigil. 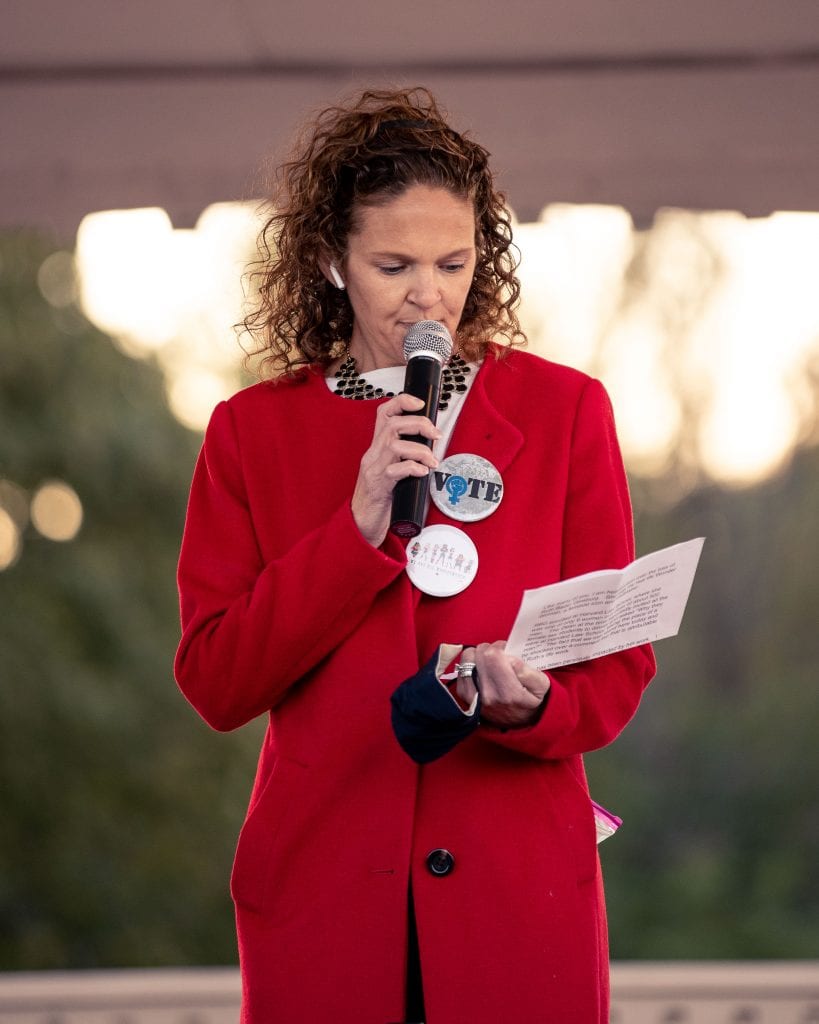 Nominated to the Supreme Court by President Bill Clinton in 1993, Justice Ginsburg was the second woman, and the first Jewish woman, to be appointed to the court in United States history.

Correnti noted that the Justice enrolled at Harvard Law School, where she was one of only nine women in a class of about 500 men. "The dean at the time reportedly invited all the female law students to dinner and asked why they were at Harvard Law School, 'taking the place of a man,'" Correnti said. "The fact that we can stand here today and be shocked over a comment like that is attributable to Ruth’s life work," she said.

Justice Ginsburg was a fierce champion of justice and equality, fighting for civil rights, inclusion, gender equality for both women and men, for people of color, the LGBTQ+ community, and people with disabilities. 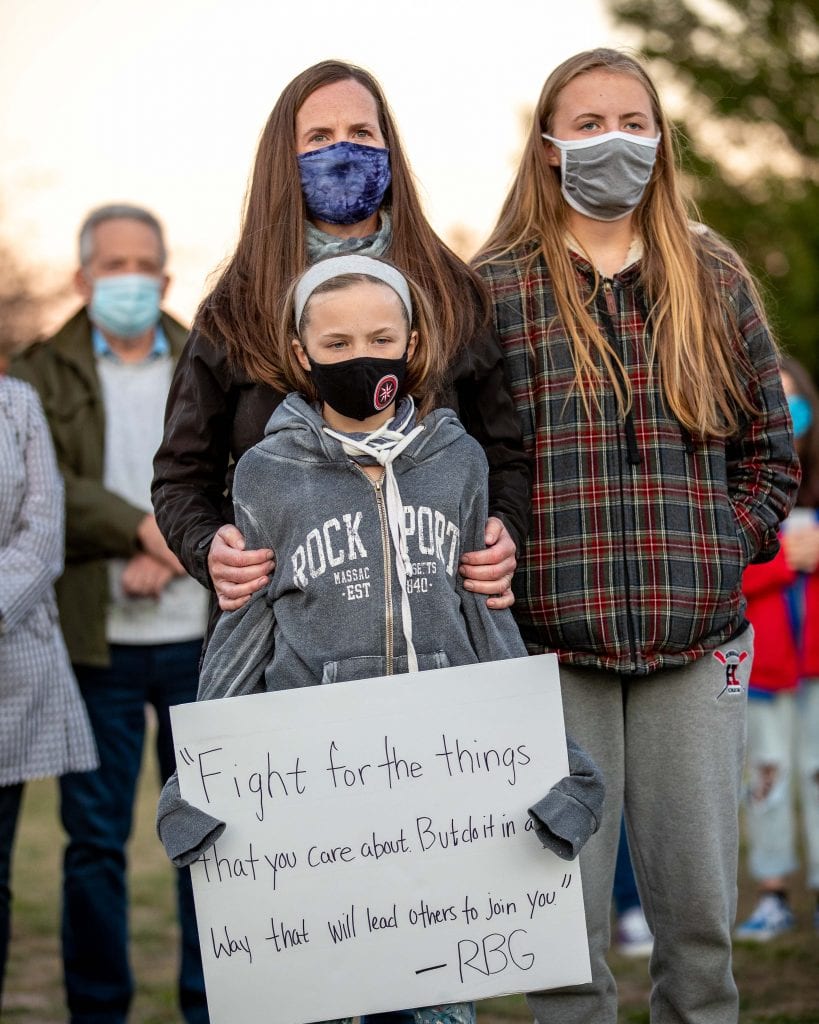 "She understood that discrimination of any kind has real consequences for us all," Correnti said. She believed that equal justice under law only had meaning if it applied to every single American."

Correnti quoted from a tweet posted by ​a​ctress Kerry Washington following Ginsburg’s death that holds real meaning for her: “Been asking myself WHY we are losing our heroes this year? I’m thinking maybe the time for hero worship is ending. Those singular souls cannot carry all the weight. We must EACH step into being heroes of our own community. Democracy needs us all. The word itself means power by the people.” 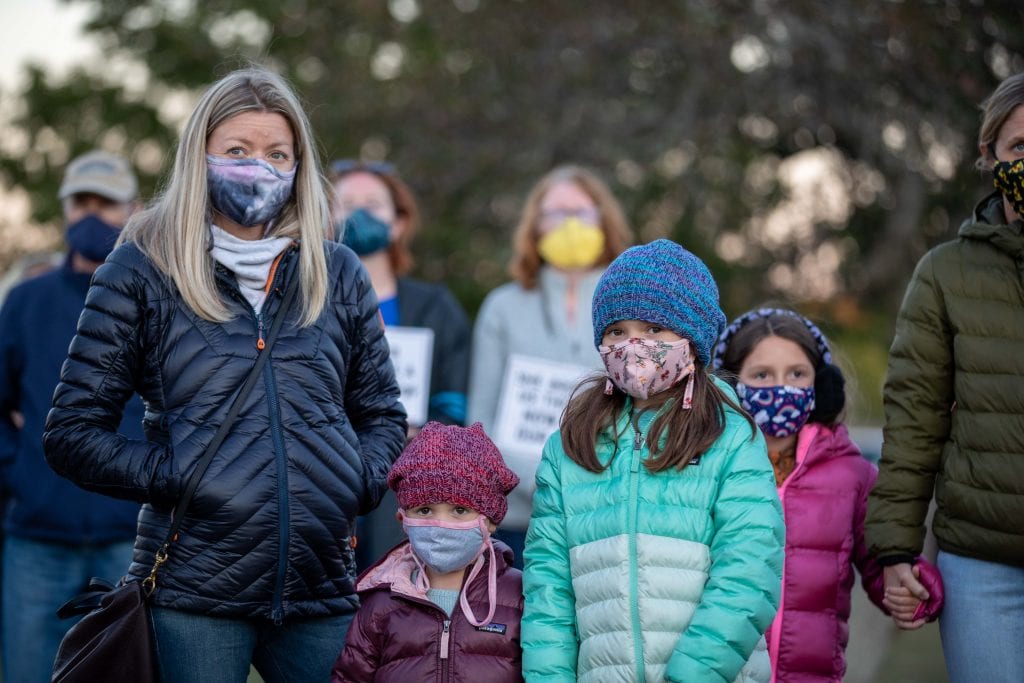 Correnti plans to honor Justice Ginsburg with action. "I will continue to do something outside myself, something to repair tears in our community, something to make life a little better for people less fortunate," she said. "May her memory be a blessing." 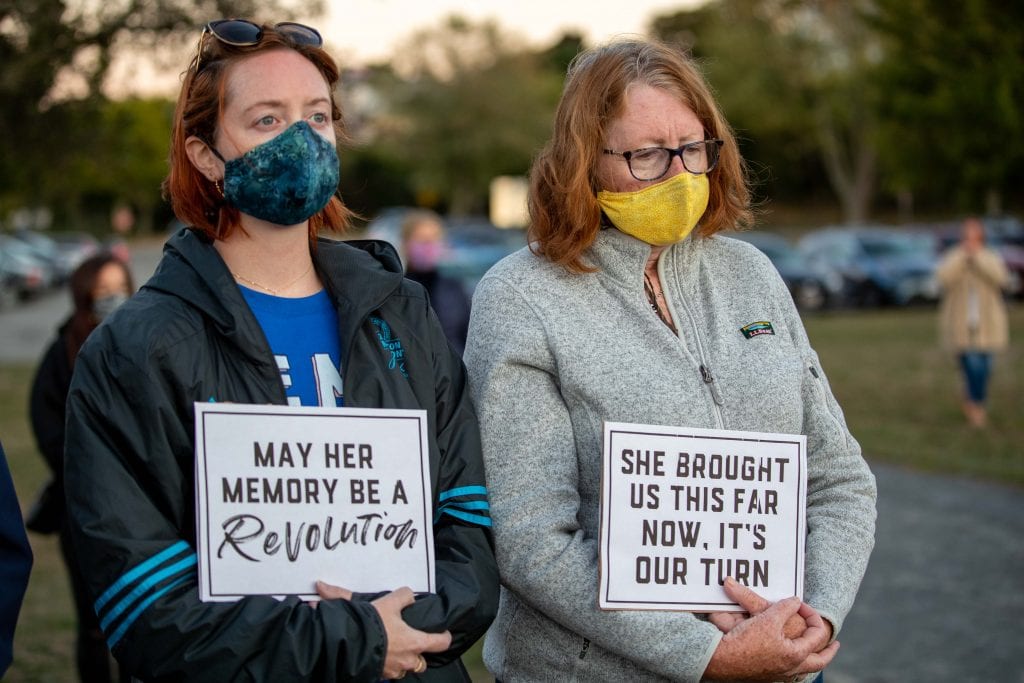 As Correnti sat with one of her daughters watching “On the Basis of Sex," a 2018 biographical legal drama film based on the life and early cases of Justice Ginsburg; when she returned from the vigil, she reflected back on the event -- the crowd that attended, the speeches by the organizers and others, and the 87 seconds of silence. "The several people who spoke were all heartbroken over her passing," Correnti said. 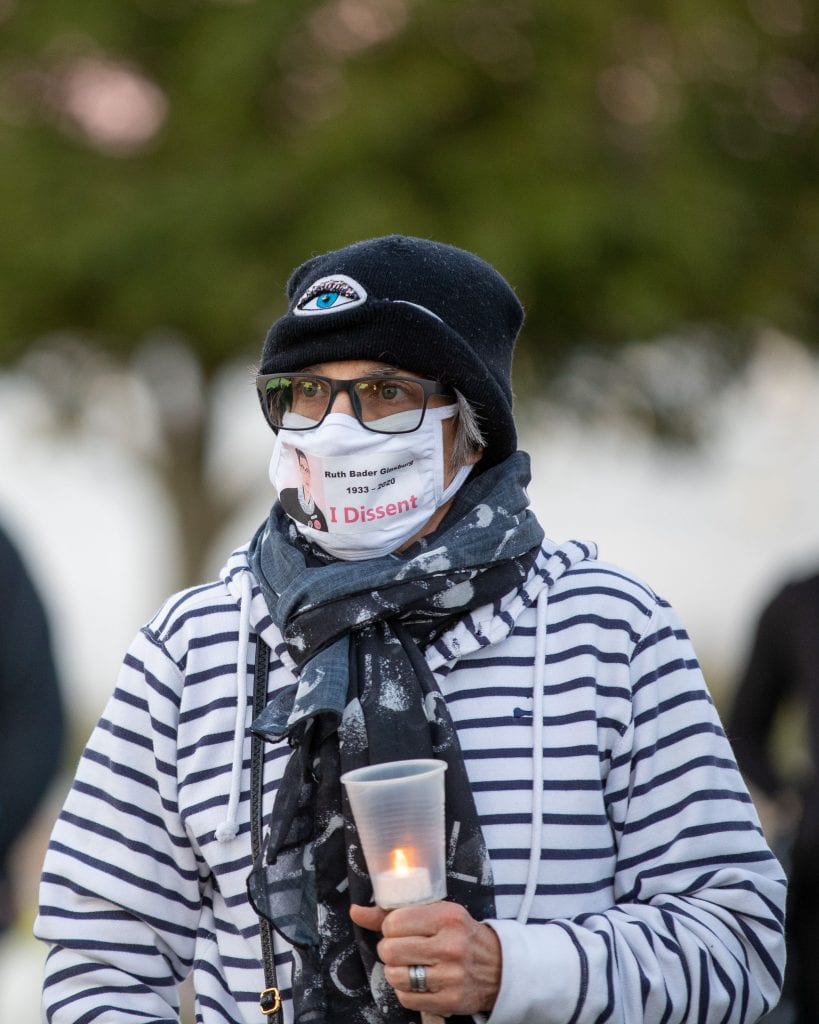 Smith said while she has kept "a stiff upper lip all weekend," seeing everyone who turned out for the event brought tears to her eyes. "We are grieving, but there's some healing that happens when we come together in our grief even for a moment," she said. "Ruth Bader Ginsburg's legacy is a blessing on us all."

Holland found it a moving experience to stand with so many others "who are ready to honor Justice Ginsburg's legacy by standing up for what's right. Massachusetts has the oldest constitution in the world. Still, we don’t have an Equal Rights Amendment," she said. "I am honoring her legacy by filing an amendment to the Massachusetts Constitution for an ERA. It doesn’t take 100 years to solve the problems we are facing; it takes political courage. Your vote is your voice, and your voice matters, so make it heard on Nov. 3." 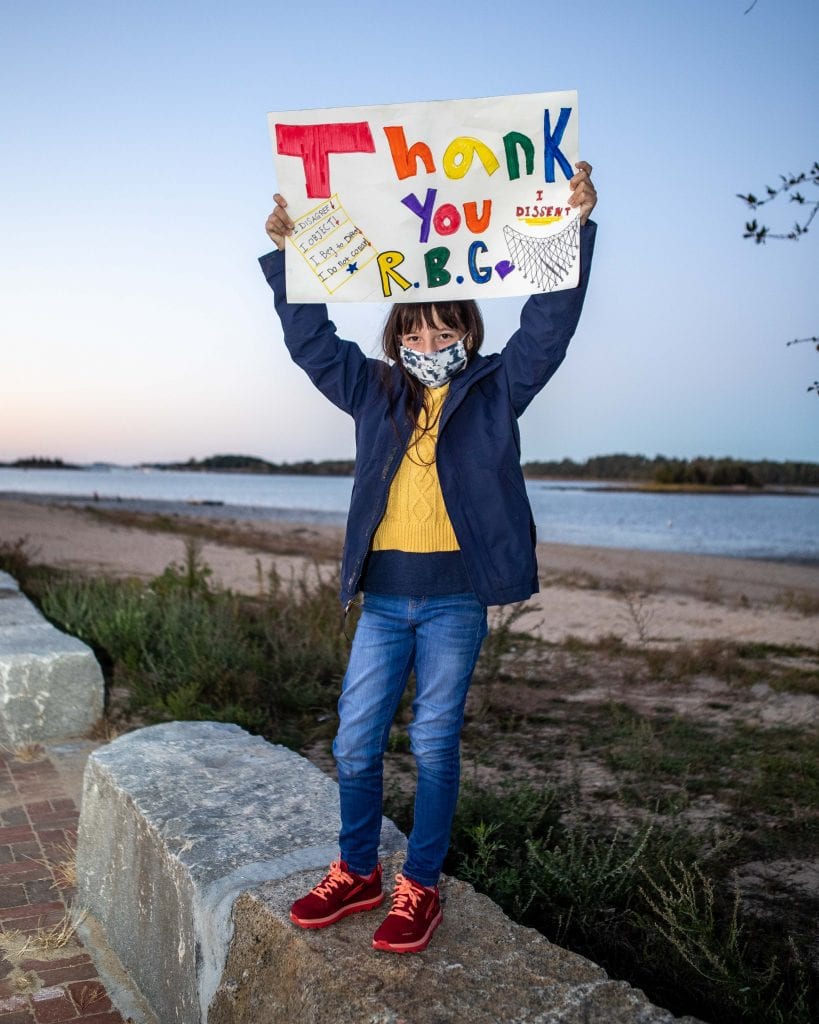