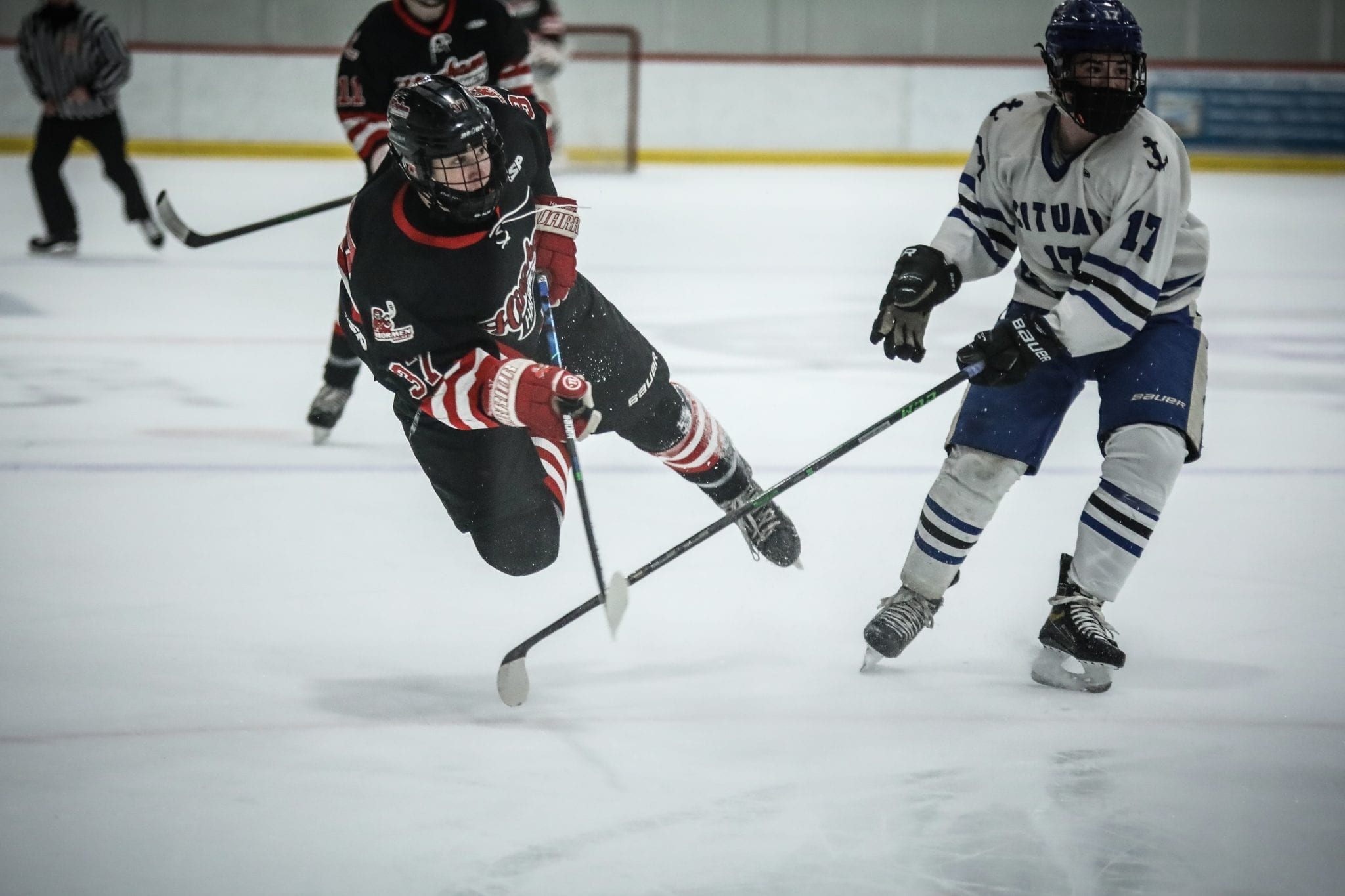 Sophomore Aidan Brazel goes airborne after firing a shot on goal. He scored his 8th goal of the season earlier in the game.

With the season on the line again, the Harbormen took the ice last night against the top seed in the Fisher division, the Scituate Sailors.  With only one loss on the season, the Sailors appeared to be a tough match-up for the Harbormen, who are coming off a convincing 6-0 win over Duxbury two days before.

Like almost every Patriot League game this year, there seems to be an urgency at the beginning of each contest to set the tone and pace of the game.  In this case, Scituate jumped out to an early 1-0 lead on a shot from freshman James Sullivan that pinged of the post and went in halfway through the first.  It didn’t take long for Hingham to answer as sophomore Aidan Brazel put one past the Scituate goaltender on a nice give and go with junior Bobby Falvey with under seven minutes to go in the period.  It’s been the M.O. of the Harbormen lately to have the defense contribute to offense and that continuing yesterday with Falvey burying one on a snapshot with minutes remaining in the first period.

As expected, the physicality picked up in the second.  The Harbormen unfortunately lost sophomore forward Allu Linna after he crashed awkwardly feet first into the boards.  This after losing sophomore defensemen Chase McKenna in the first period with an apparent upper body injury.  There were also a few penalties, including a delay of game on Scituate goaltender Cole Coyne, who’s net kept mysteriously popping out of place.  Hingham, who was outstanding on the power play vs Duxbury (3/4), scored seconds after the Coyne penalty expired.  Senior Evan Corbett poked one by Coyne on the short side giving Hingham the 3-1 lead with three minutes to go in the period.  Scituate was called for an unsportsmanlike penalty after the Corbett goal putting Hingham back on the PP, but that was cut short with a Lars Osterberg penalty 30 seconds later.

The third period saw Hingham step up their D as they protected their lead.  In Hingham’s only loss this season against Hanover last Saturday, the Hawks caught the Harbormen off guard a few times sending a guy behind the defense resulting in a couple of goals.  It was clear that this was Scituate's strategy as well.  Hingham made the appropriate adjustments this game, which let to less opportunities and many icing calls for Scituate.  A little less than half way through the third, senior captain Paul Forbes tucked one in from behind the net from a deflected Corbett shot.  A minute later, Scituate scored to make it a two goal game with nine minutes left.  The Harbormen put the game away with another goal from Corbett, his 10th on the year, with under three minutes left in the game.

Once again, it was a total team effort.  The offense has definitely shown up the last two games after the loss, but the defense has also been a huge factor in these games, not only keeping the puck far away from goaltender Theo Jacobs, but also contributing on the scoreboard.

“We’ve been getting passes from our forwards at the point,” Falvey tells the Anchor after the game. “Our coaches have emphasized joining the rush and when we get the puck, good things happen, and that’s what’s happened to us all season.”

Falvey was boarded twice in the loss to Hanover and seemed to be off his game.  He’s bounced back, along with the rest of the team the last two games.

“These two wins help us and myself a lot,” he says. “Our bodies are tired, except its playoff hockey and we have to do whatever it takes to win.

The Harbormen will face Marshfield on Friday night for the Patriot Cup Championship.  This will be their 4th game in seven days and Falvey knows they have their work cut out for them.

“They are deep on the offensive end and they are solid on the defensive end too. That game will be an absolute battle and which ever team wants it more, will come out on top.” 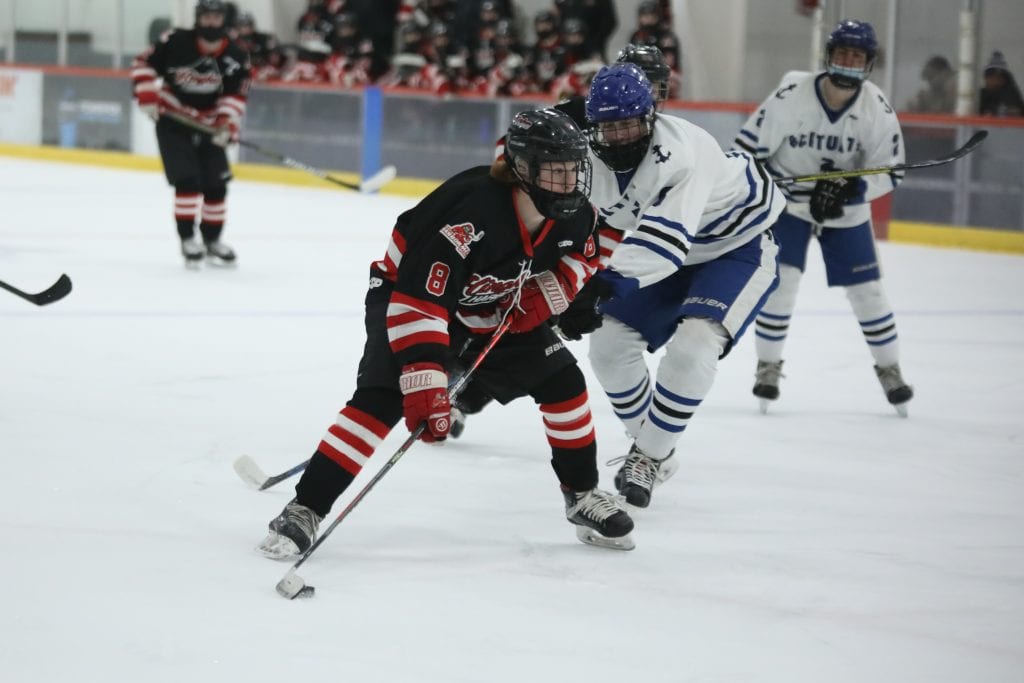 Junior Conor Walsh gets around a defender and fires a shot on net in the first period. 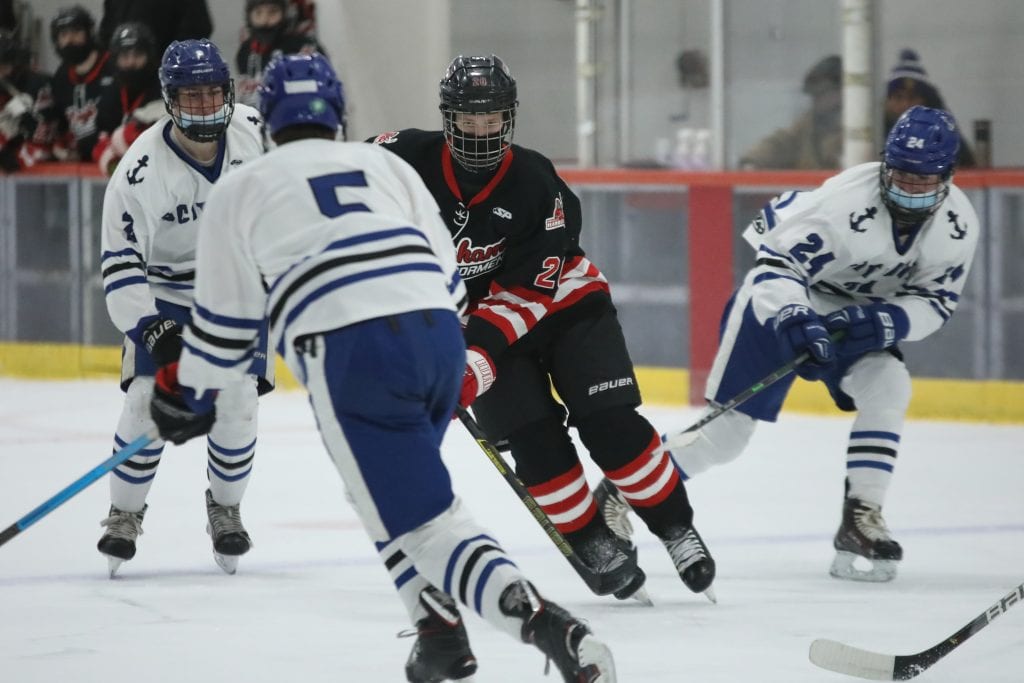 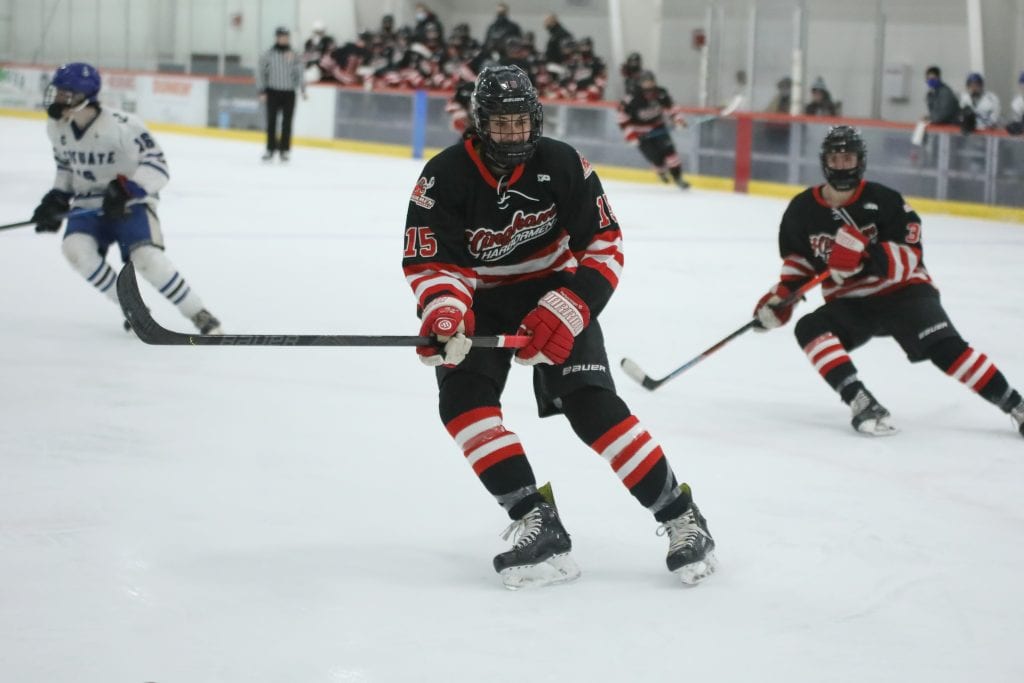 Junior Wyatt Iaria looking to keep the puck in the Scituate end. 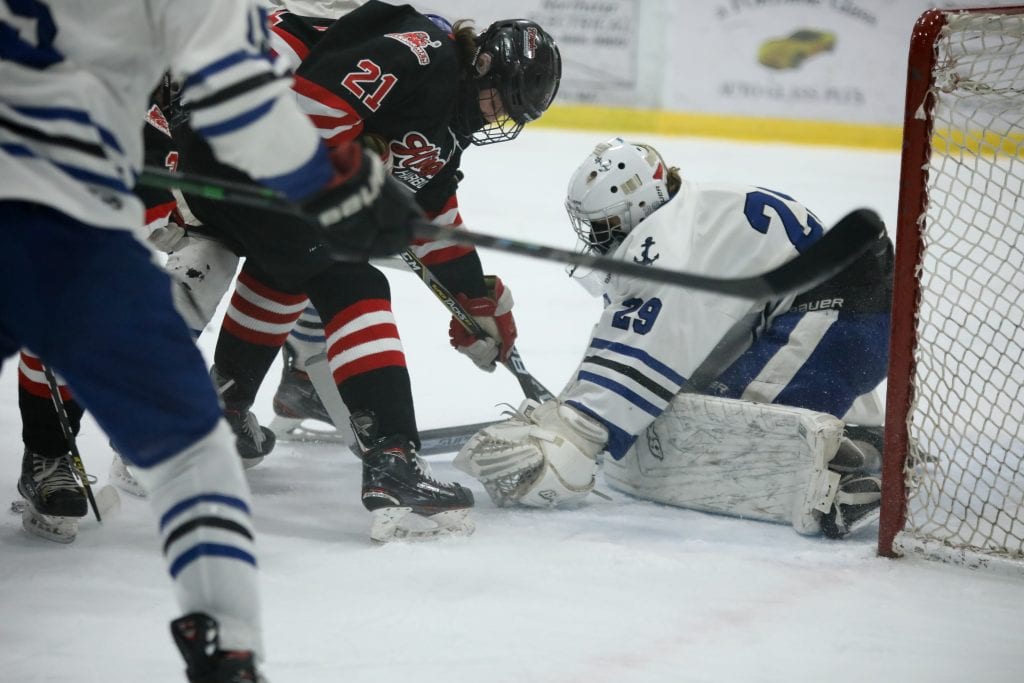 Senior captain Paul Forbes tries to poke the puck past the goalie in the first period. 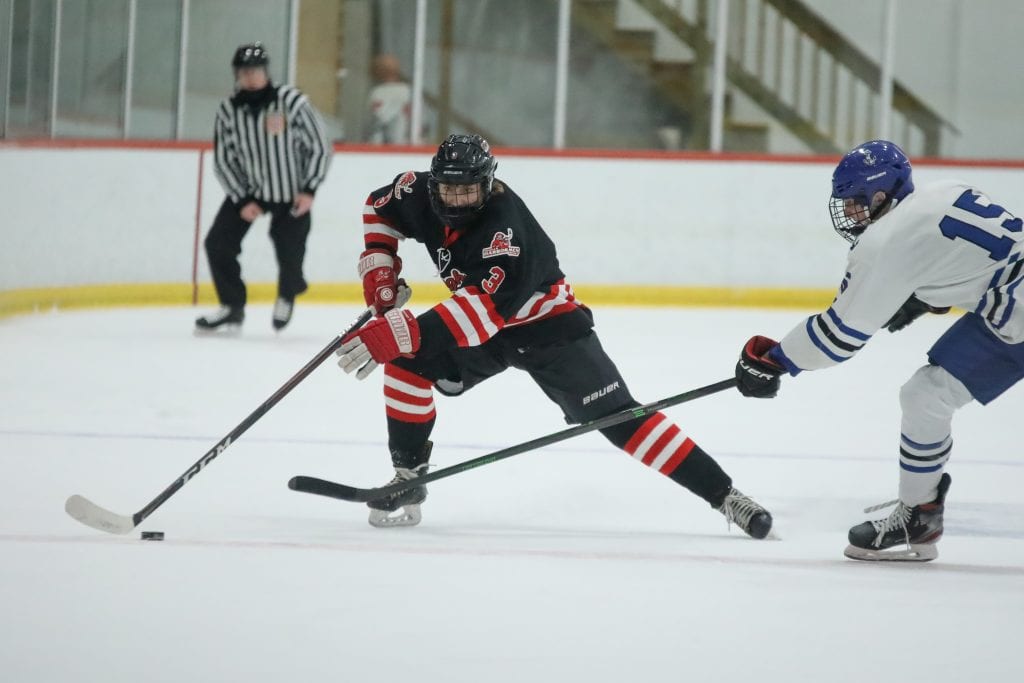 Senior Lars Osterberg gets past a Scituate defender. 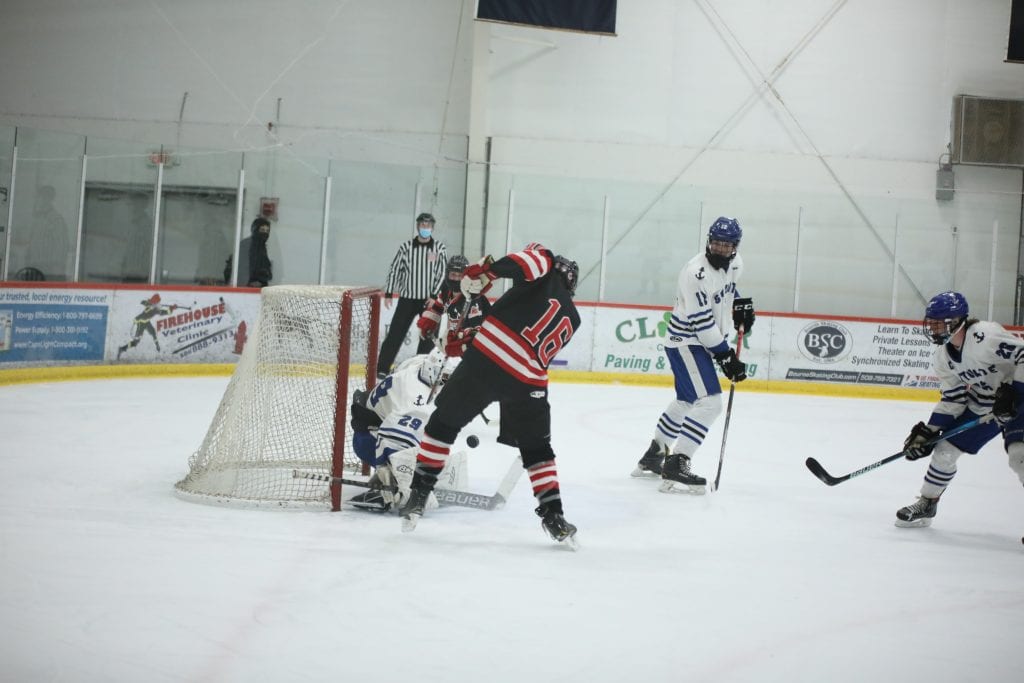 Senior Evan Corbett puts his first goal of the game past the goalie in the second period. 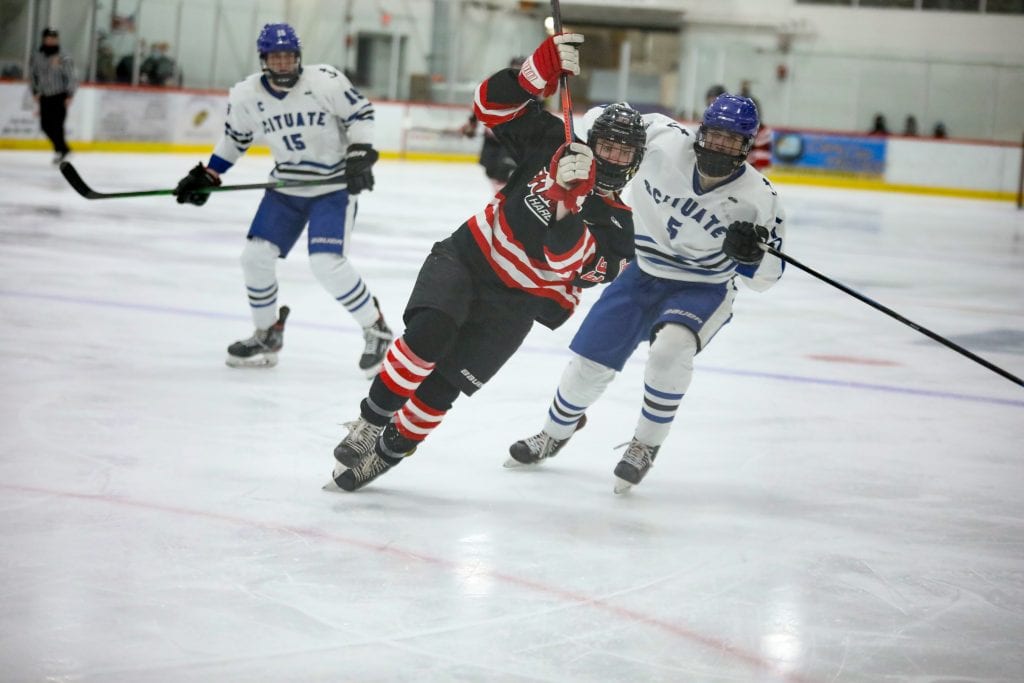 Junior Alex Barzowskas fights his way past a defender in the second period. 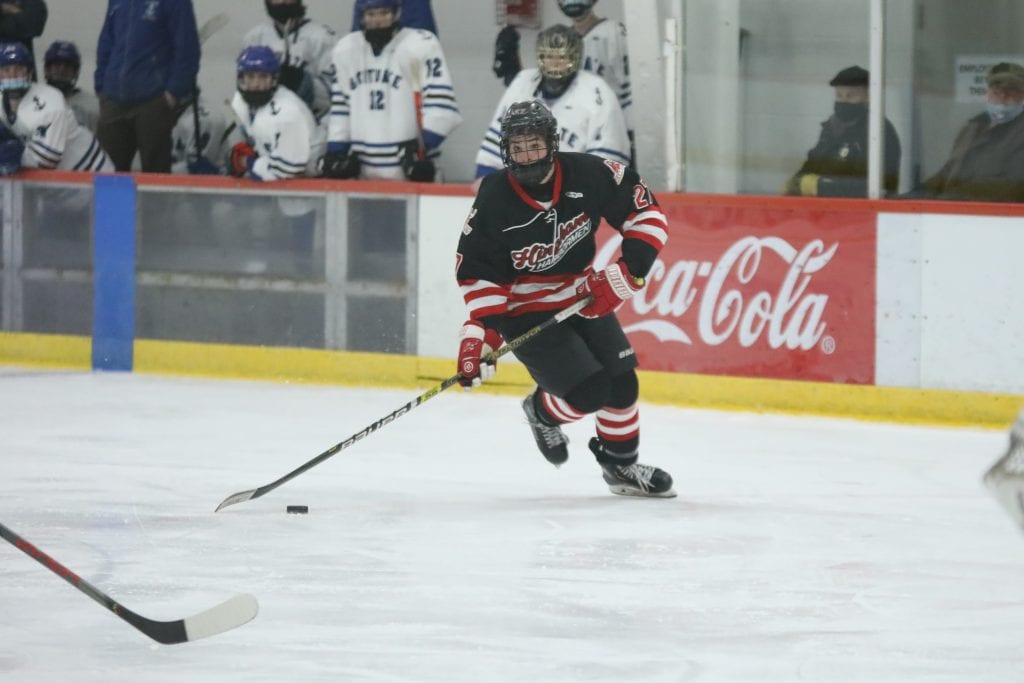 Sophomore Ace Concannon lines up a shot in the beginning of the third. 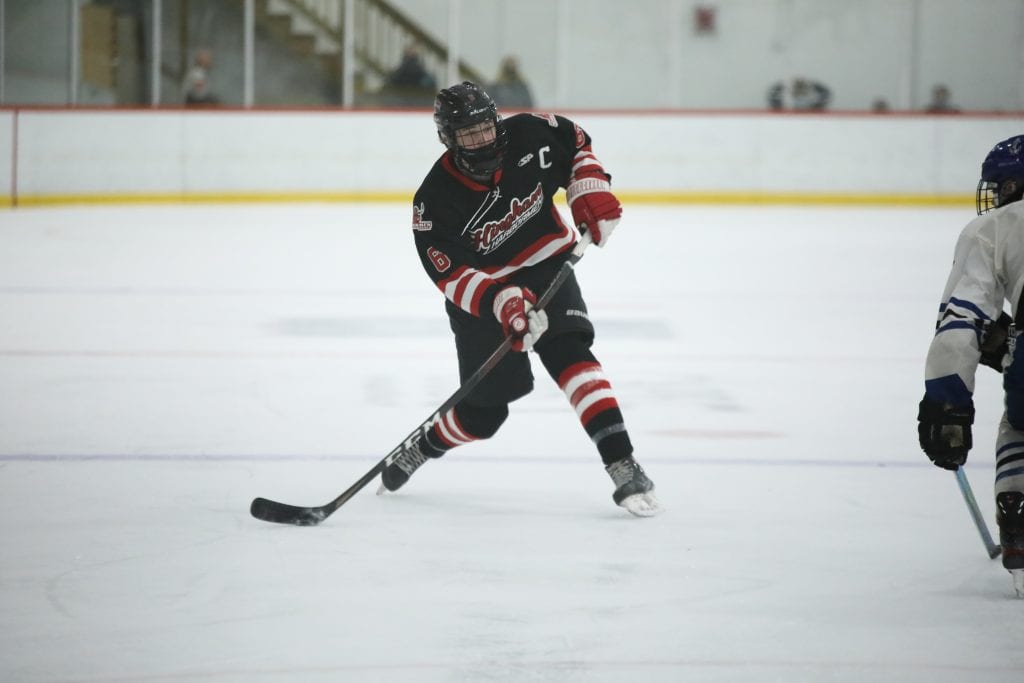 Senior captain Ronan Mulkerrin, part of a defense that continues to score. 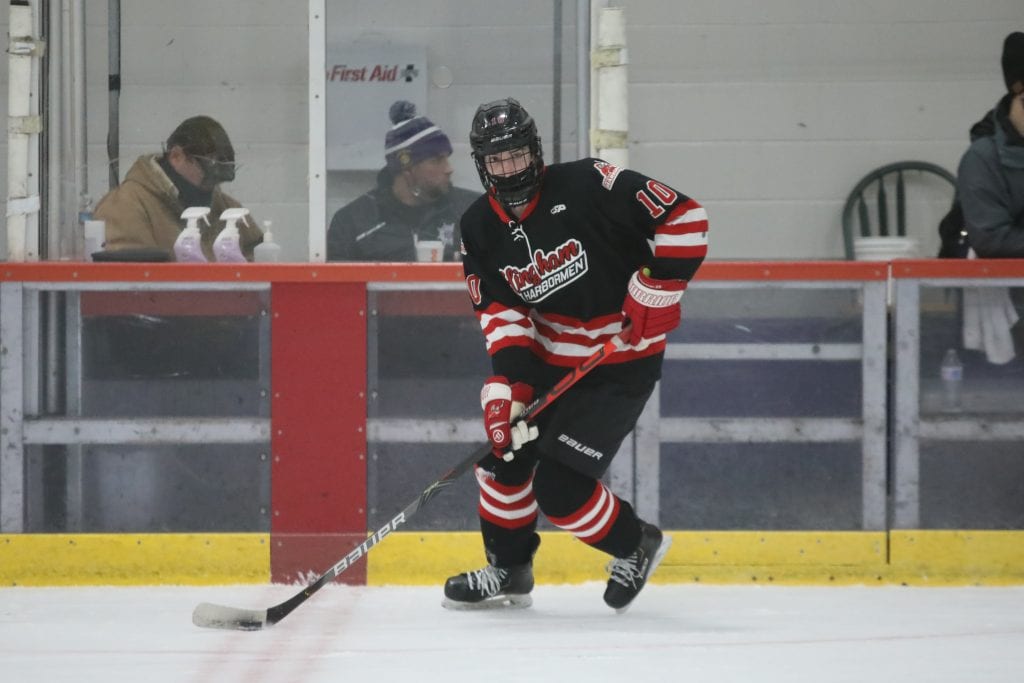 Junior Drew Carleton keeps the puck moving towards the end of the game. 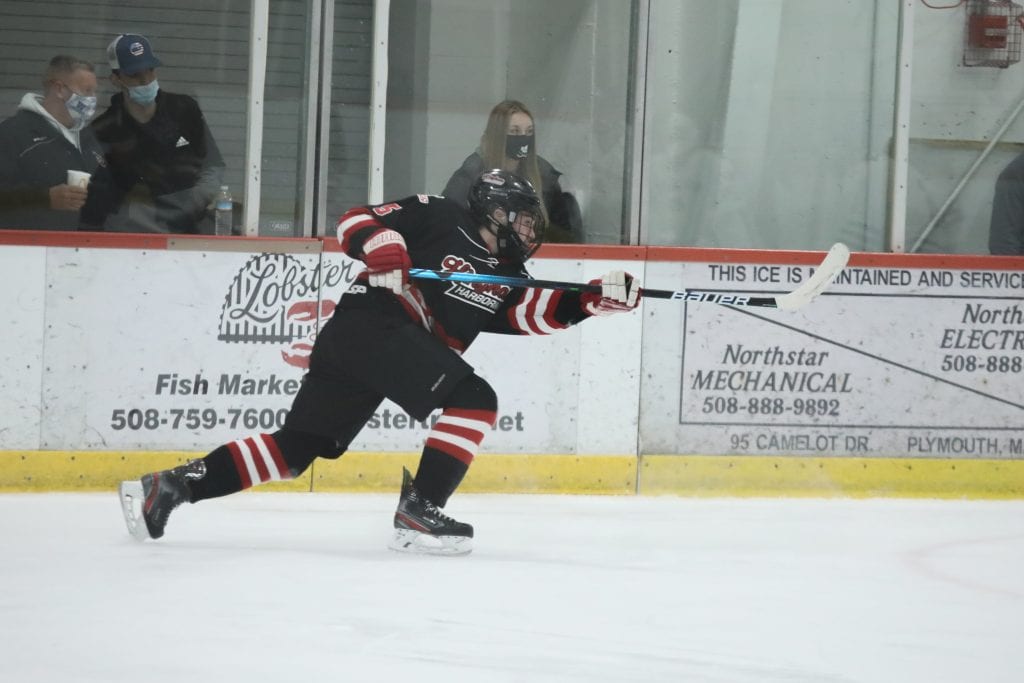 Junior Ryan Burns continues to fire shots at the end of the game. 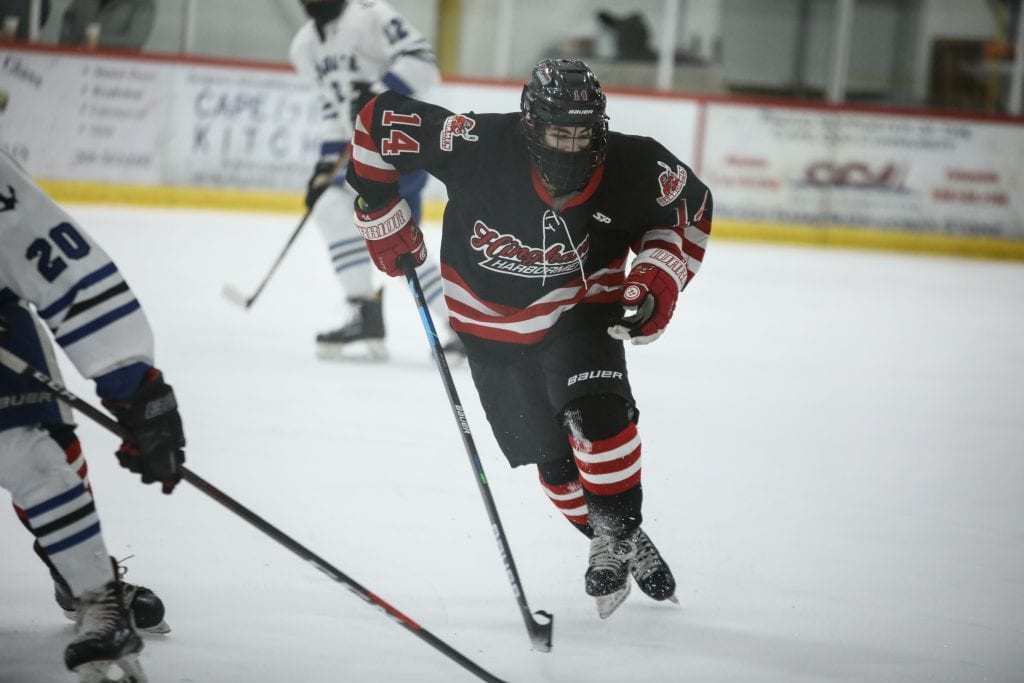 Sophomore Billy Jacobus looking to just run out the clock. 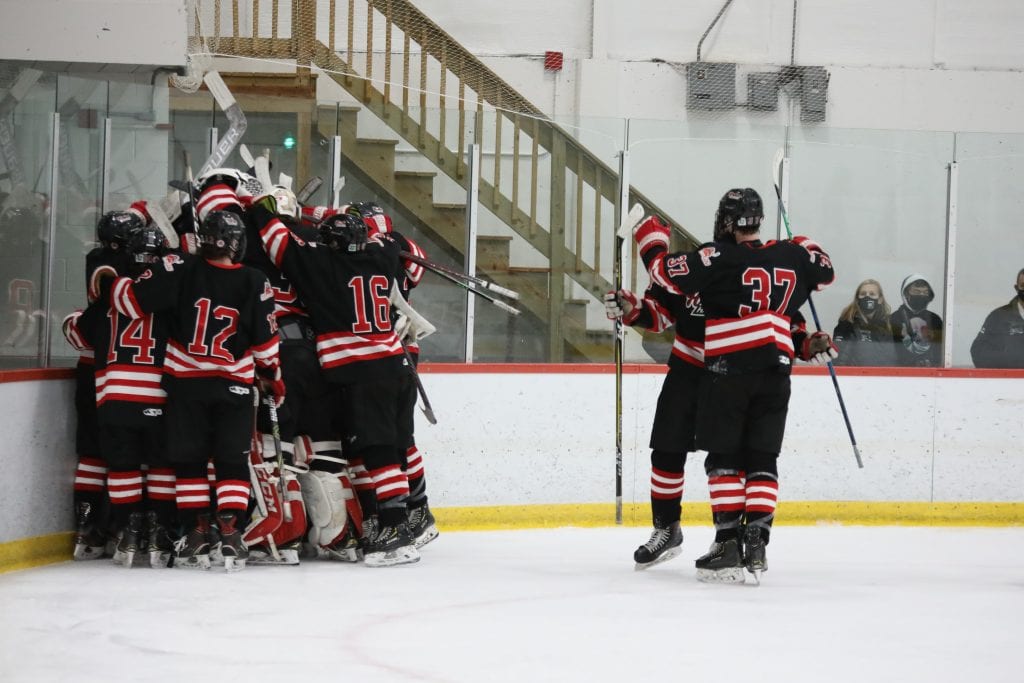 The boys celebrate a big win.