Hingham High School Senior Ella Griswold, a member of the Plymouth County 4-H program since she was in third grade, achieved amazing success with her dog, Luna, this summer while competing in dog shows at both the Marshfield and East Middleboro fairs.

This winning team took home numerous ribbons and trophies in canine agility, showmanship, achievement, and obedience, as well as overall High Points awards over the course of the three weeks of competitions.

In addition to greatly enjoying participating in these events with Luna, another highlight is "meeting new people," Ella told the Hingham Anchor. "Everyone is super-fun and nice -- and there's always someone to hang out with when you're not competing."

Agility competitions involve a handler directing an off-leash dog through an obstacle course in a race for time and accuracy, with no food or toys as incentives. The dogs perform jumps and make their way through tunnels and weaving poles, among other challenging activities. The handler is not allowed to touch either the dog or any of the obstacles and is limited to voice, movement, and various body signals to help control the dog's behavior.

All canine division competitors (of all ages and skill levels) are awarded points earned in each individual competition category, which are then compiled to assess overall winners by category -- and for High Points (all categories combined, by animal) for the whole fair.

Luna enjoys being part of the excitement, too, especially when Ella pulls out the bag that she brings to every event containing water bottles, paperwork, pens -- and dog treats.

Ella joined the A Round of A-Paws 4-H Dog Club -- which focuses on agility, training, dog safety, and performing tricks -- in June 2016. Working with Luna, a Bernese Mountain dog/Poodle mix, she has participated in dog training for a variety of dog agility and dog showing activities over the past six years and recently began competing in dog showmanship and obedience competitions.

Through the club, Ella has participated in more than 200 hours of volunteer-based activities during her time with 4-H and is currently serving as the elected co-president for the second year. 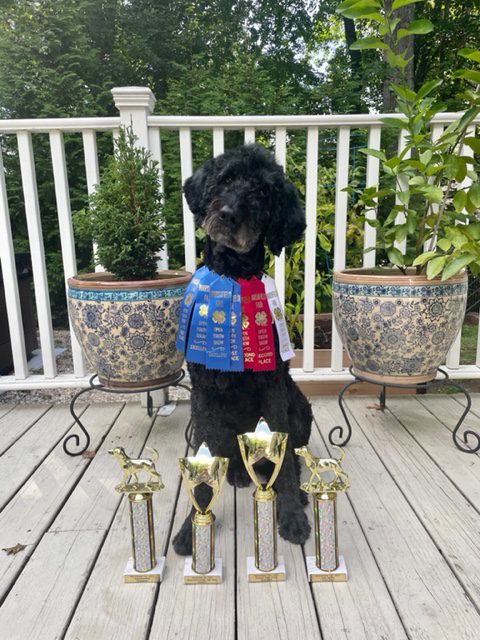 The club meets regularly, with a focus on dog training, agility, and performance-related activities.

The focus of the 4-H program -- the largest youth organization in the United States, with more than seven million participants -- is to "build tomorrow's leaders" and to "learn by doing."

The 4-H emblem is identified by a green four-leaf clover with an "H" on each leaf,  standing for "Head, Heart, Hands, and Health."  Massachusetts 4-H is part of the University of Massachusetts Extension System. The 4-H program is open to all youth between the ages of five and 18 from different backgrounds and varying abilities who are supportive of one another in their shared love for working with their dogs.

In addition to showing at 4-H fairs, Ella was one of seven 4-H delegate leaders selected via application last March to represent the state of Massachusetts at the 4-H national conference in Washington, D.C.

More than 300 delegates from all 50 states, Puerto Rico, and the Northern Mariana Islands attended and contributed to various programs and roundtable discussions with representatives from the U.S. Department of Agriculture during the course of the conference week.

Ella's mother, Karen, said she's extremely proud of the amount of time and effort that Ella has put into training Luna over a long timeframe. "She's not always the easiest dog, and it's been an evolution over many years," she said. "Ella has stuck with it even after a few 'entertaining' [incidents] that happened in the arena and when practicing in parks when Luna got it into her head that she wanted to do something different [from what was being asked of her] that were tough to get beyond."

Over time, Luna improved. "There has to be a level of trust between the dog and his or her handler and the knowledge that the handler is leading the dog correctly to avoid the dog getting distracted or losing interest," Karen explained.

Despite the challenges, Ella said the end result has been worth the effort. "Luna is definitely much better-behaved now, and it's fun to show off for friends!" 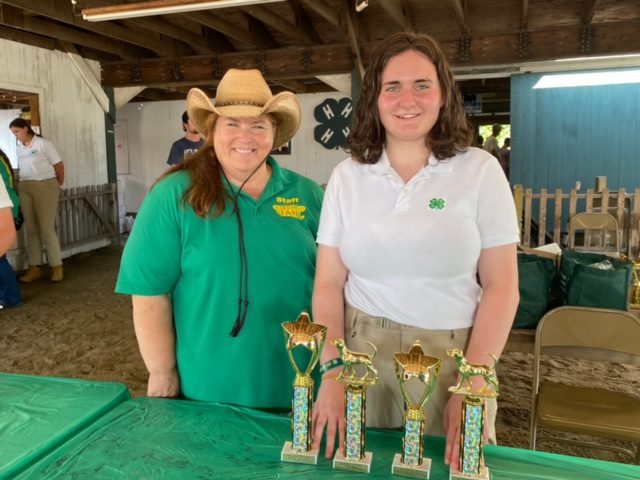 While maintaining patience during the training process was not always easy, Ella explained that many of the people in her 4-H club who were competing at a similar level were having more success with their dogs than she was with Luna.

Instead of getting frustrated, Ella found inspiration in what the other dogs and their handlers were accomplishing.  "I had a friend at the same level, who also had a [dog who could be difficult to train], and we worked together," she said. "There were moments when our dogs would be really awesome, which encouraged us to stay with it."

It's all about handlers building trust and good communication with their dogs "so that each person and his or her animal know what the other is doing and know what to do [themselves]," Ella explained.

Karen has high praises for Plymouth County 4-H Club leader Cathy Acampora's leadership skills. "She is one of the most welcoming and supportive people," she said.

Following a busy summer, Ella is settling into the new school year. She is on the ski team and involved in HHS theater.

Next year Ella will be heading for college and will be on to new adventures. Although she will no longer be involved with her current 4-H program, she in considering offering to judge events at local fairs similar to the ones she participated in with Luna during late August and early September.

For further information about the 4-H program, visit https://plymouthcounty4h.org/.