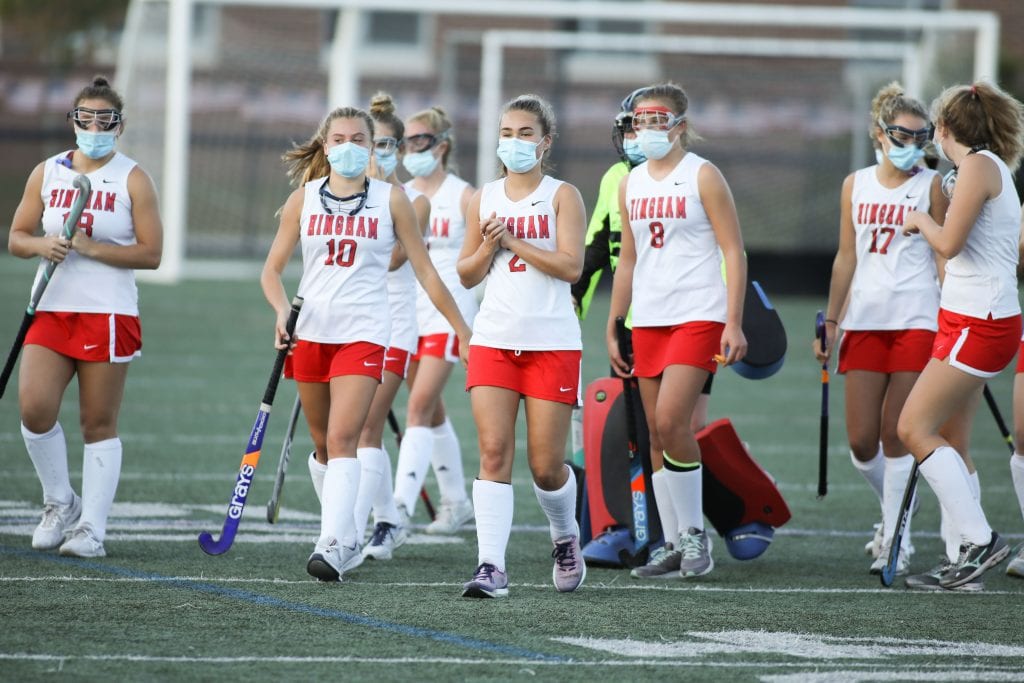 HHS Field Hockey will take the results after 2 late goals give them a tie with Plymouth North.

HHS athletic competitions are back.  It was a busy first full week for the Harbormen and Harborwomen as they get back on the fields, courts, and courses.

The boys have been back for more than a week now.  After winning their season opener last week, the Harbormen golfers had 3 matches this week.  On Tuesday, they faced off against Silver Lake at SSCC winning 242-272 behind strong rounds from junior captain Luke MacDonald's par (36) and senior captain Jake Wilson (38).  The team was right back on the course on Wednesday traveling to Duxbury.  Hingham pulled out a 2 stroke win 239-241.  Wilson(38), Carson Erick(39), and Alex Bankhead(39) all contributed in the victory.  Finally, for the third straight day, they met Marshfield back at SSCC and made it three straight wins for the Harbormen as they start the season 4-0.  Next week's schedule: 10/5 @ Plymouth North, 10/7 @ Quincy, 10/8 vs Whitman-Hanson

After 2 scrimmages, the girls finally had their first game on Friday against Marshfield.  The game was close in the first half as Hingham took a 1-0 lead into the second half, but the Harbormen turned it on and scored 5 more giving them the 6-0 win.  Sophomore Sophie Reale had 4 goals and new Head Coach Sarah Dacey earned her first win.  Next week's schedule: 10/6 @ Plymouth North, 10/8 vs Whitman-Hanson.

The boys started their season with a tough 1-0 loss at home against Marshfield on Friday.  It was a hard fought game throughout until the Rams scored early in the 4th quarter.  The Harbormen will look to bounce back next week as they face Plymouth North at home on 10/6 and at Whitman-Hanson on 10/8.

In one of the most exciting games of the week, the Field Hockey team provided us with late heroics on Thursday at home against Plymouth North as they came back to tie the game late in the 4th quarter after being down by 2 goals.  Penalty shot by senior Katie Hartnett followed up by a goal from junior Kyle Wison secured the tie for the Harborwomen.  Next week's schedule: 10/5 vs Notre Dame, 10/7 @ Whitman-Hanson, 10/9 @ Silver Lake.

In what was supposed to be their first meet of the season, the boys cross-country ended up having an intrasquad time trial on Thursday due to their opponent being sidelined from COVID-19 protocol.  It was a great chance to get one last tune-up in before their meet next week on Thursday, 10/8 at home against Duxbury.

A similar situation with the girls cross-country team on Friday.  Their opponent was unable to participate but that didn't stop them from running against themselves.  The girls were split into three teams, Team Pria, Team Callie, and Team Bonnie.  In the end Team Bonnie pulled out the victory.  Next week's schedule: 10/6 vs Duxbury.

*Before going to a game, be aware of the strict spectator rules and regulations of each venue.