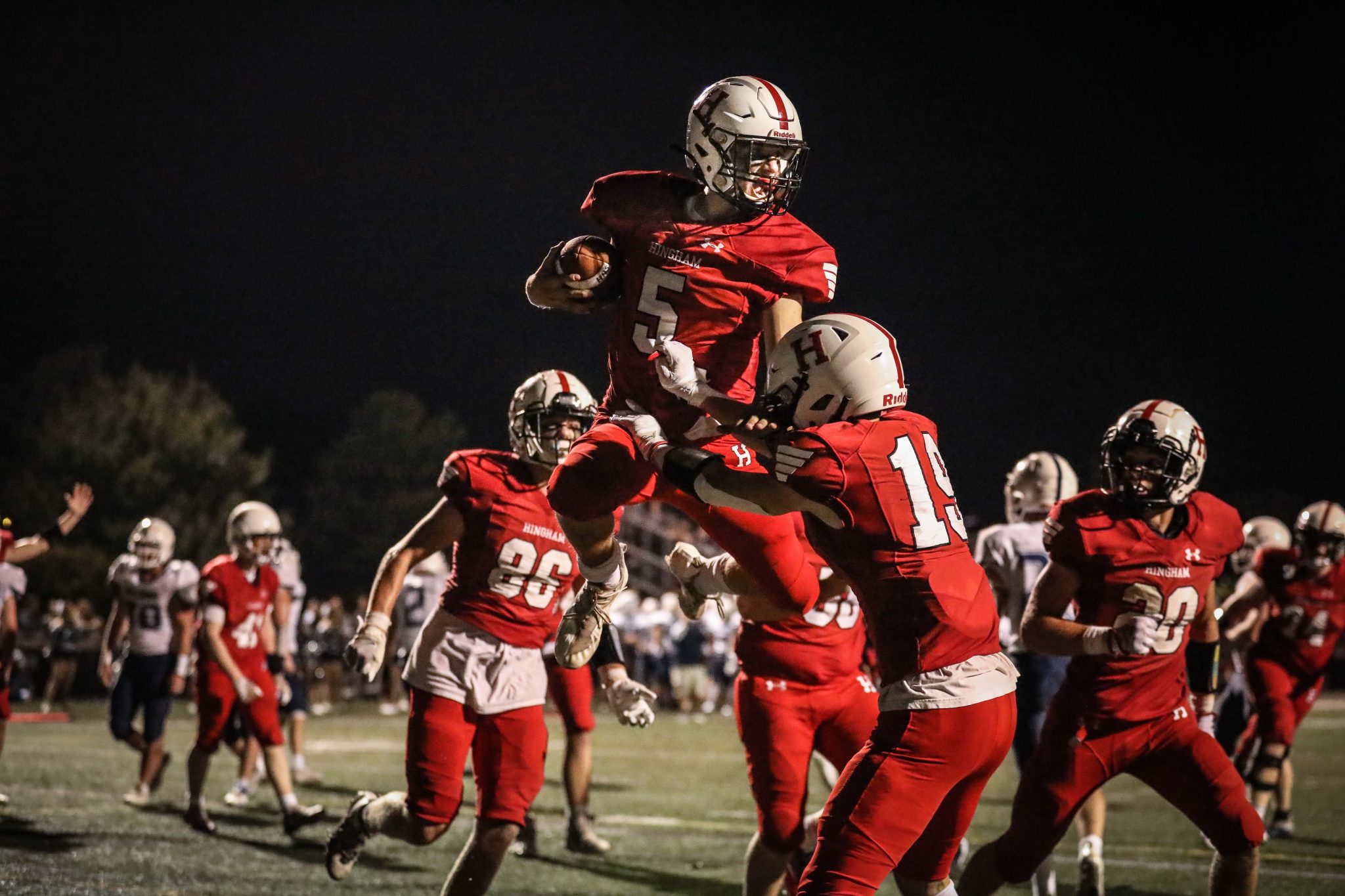 A famous Hingham resident always says “you need play well at all three phases of the game to have a chance.”  Well the Harbormen played exceptional well on special teams and defense and was good when it counted on offense tonight.  All this added up to a huge upset win over reigning Division 6 Super Bowl champs Rockland Bulldogs.  And while we don’t get to say this often in high school football, the best player on the field tonight was junior Harry Bradshaw, the kicker.

Bradshaw was successful on 3 of 4 onside kicks and nailed 2 field goals and an extra point in Hingham’s 19-12 win.  Onside kicks are nothing new for Hingham as head coach Mark Nutley points out.

“Myself and the other coaches got together and said why not, let’s do it, let’s have some fun” he explains after the game. “Last year we had 7 or 8 of them I think.  Today we had 3.  We live or die by it.  If it kills us, it kills us, but we got a bunch of extra possessions tonight.  Offensively we struggled, but getting those extra possessions helped us get the ball in the end zone.”

One would think will all the success they have with the onside kicking game, they would spend a decent amount of time practicing it.

“We only did it once, yesterday,” says Bradshaw.

When Hingham wasn’t busy recovering onside kick, their defense was causing all sorts of problems for the Bulldogs.  Ranked as one of the top teams on the South Shore, they have a very talented QB in Michael Moriarty and explosive offensive weapons. Except for 2 big plays - a 79yd pass to the 1 yard line in the second quarter and a 39 yard TD pass in the beginning of the fourth quarter, the Harbormen held Moriarty and the running backs in check all night.  Senior captain linebacker Ronan O’Ciardubhain led the way with big contributions from senior linebacker Mike Schwartz, and defensive lineman senior Brian Barnard and junior Gunnar Corey.

Going into the season the season, the defense had some idea that they could be good this year, but now showing it in a real game, the know things could be special for them.

“We have a lot of 3-year starters,” O’Ciardubhain says.  “ We know what we have to do.  Our offense is on the younger side, so we had to control the game.  We feel on top of the world.  We feel like we can beat anyone.  Rockland was ranked number one on the South Shore and when you beat number one…guess who’s number one now?”

The offense, while struggled at times, showed up when needed.  After going down 7-3 at the end of the first half, Hingham recovered the opening kickoff of the second half, which resulted in a TD by junior running back Will St. Pierre.  Going up 13-7 after Bradshaw’s second FG of the game, Rockland came right back and retook the lead 14-13 with under 9 minutes to play.  The Harbormen didn’t panic and continued to dictate play on defense and feed the Bulldogs a steady dose of St. Pierre and QB Jack Nicholas runs.  This put the men in red on the goal line with under 90 seconds to play and on a third and one, Nicholas took the snap and ran off his right guard and dove into the end zone giving Hingham the 19-14 lead.

“We put Cam (Dobson) back there to lead block for him,” Nutley says of St. Pierre.  “We got them a little tired maybe.  We are just going to grind the ball.  We’ll pick up three yards if we have to.  Will puts his foot down and runs straight ahead.”

With close to 30 carries tonight, no one knows how much St. Pierre can wear a defense down then his own defense.

“We go at it at practice,” laughs O’Ciardubhain.  “I can you myself, he’s one of the toughest kids I know.  Him getting that many touches and still wanting to come back in, even when he’s gassed, huffing and puffing, it’s just unbelievable.”

After this big win to start the season, the Harbormen have their next three games at home.  Next Friday, Arlington will visit Hingham, followed by Weymouth and Whitman-Hanson.  A tough schedule, but one they feel a whole lot better now than before tonight. 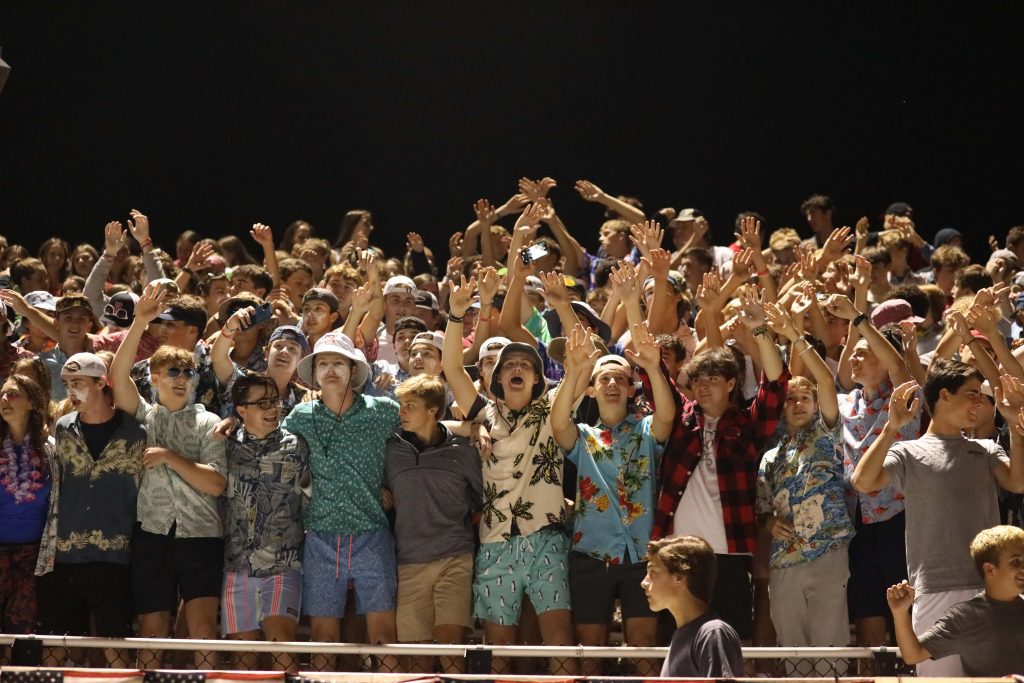 The Red Army was riled up from the start and made a huge difference in the 4th quarter. 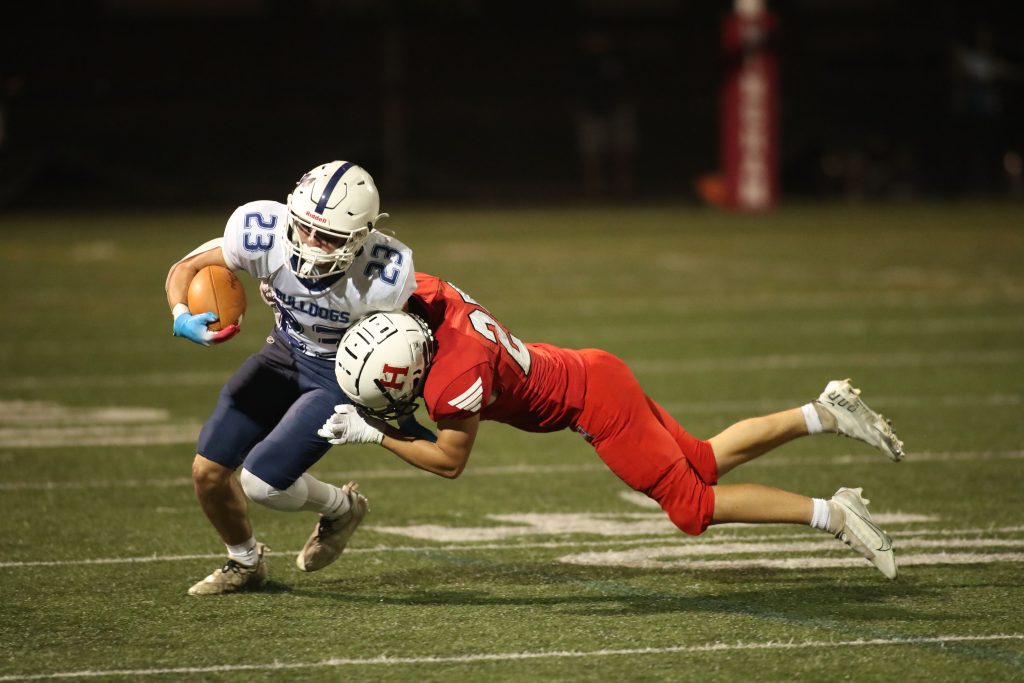 Junior Patrick Ryan drops the RB for a loss of 2 yards. 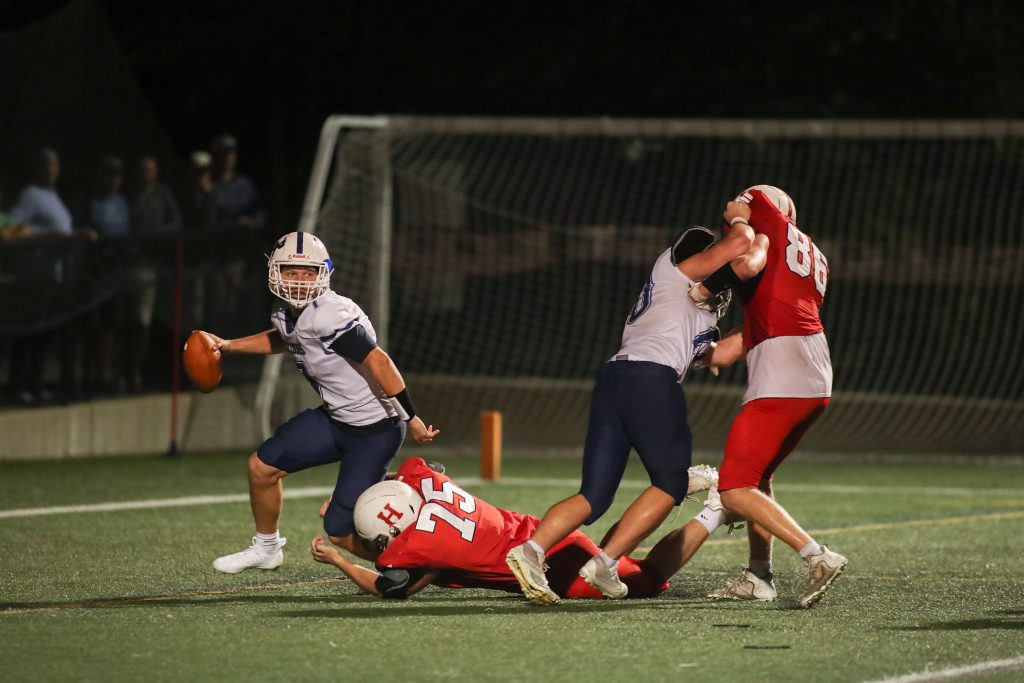 Senior Brian Barnard almost gets the safety late in the game. 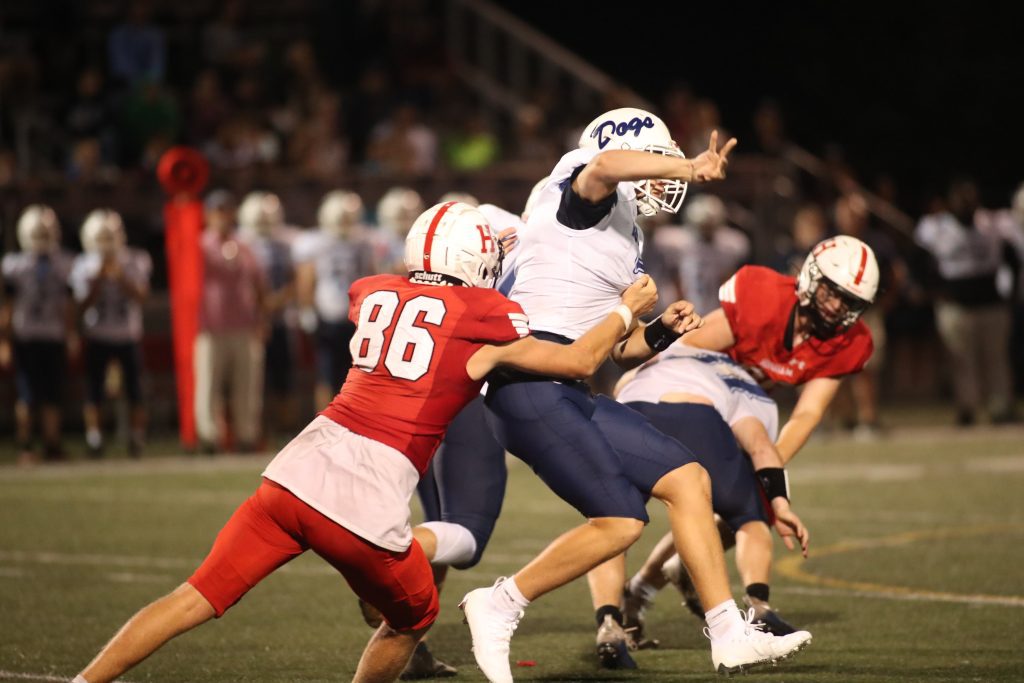 Junior Gunnar Corey hits the QB just has he lets the ball go late in the game. 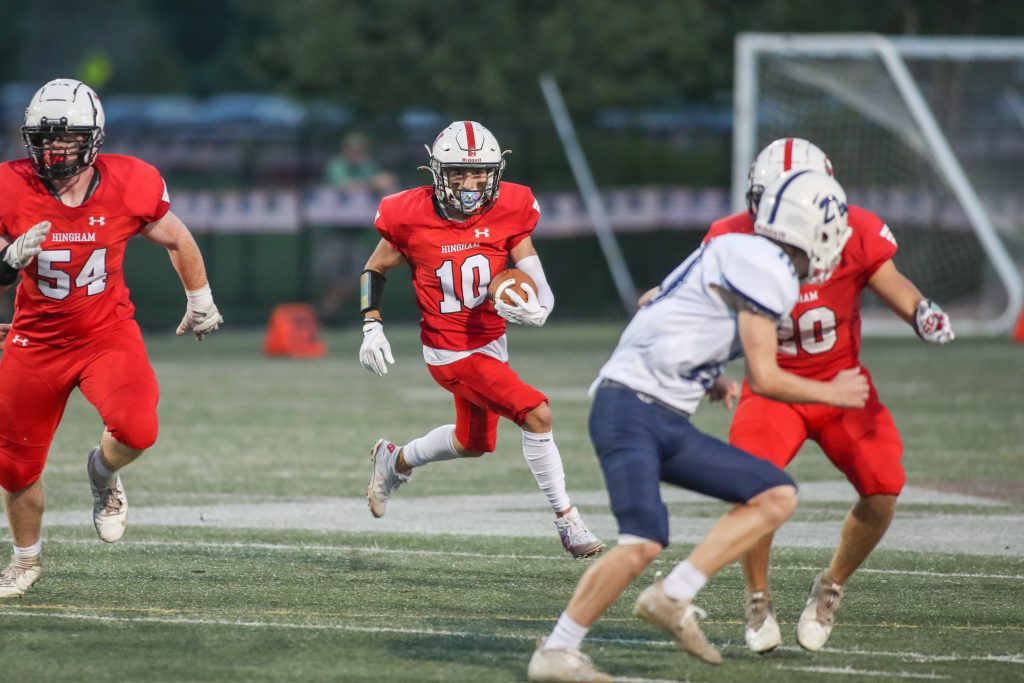 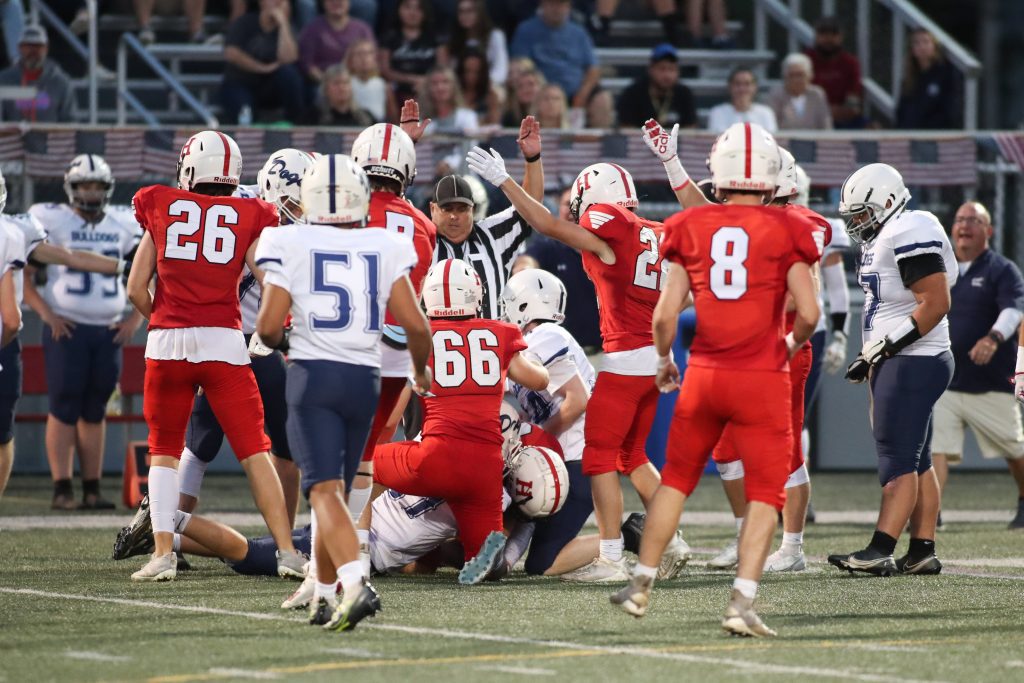 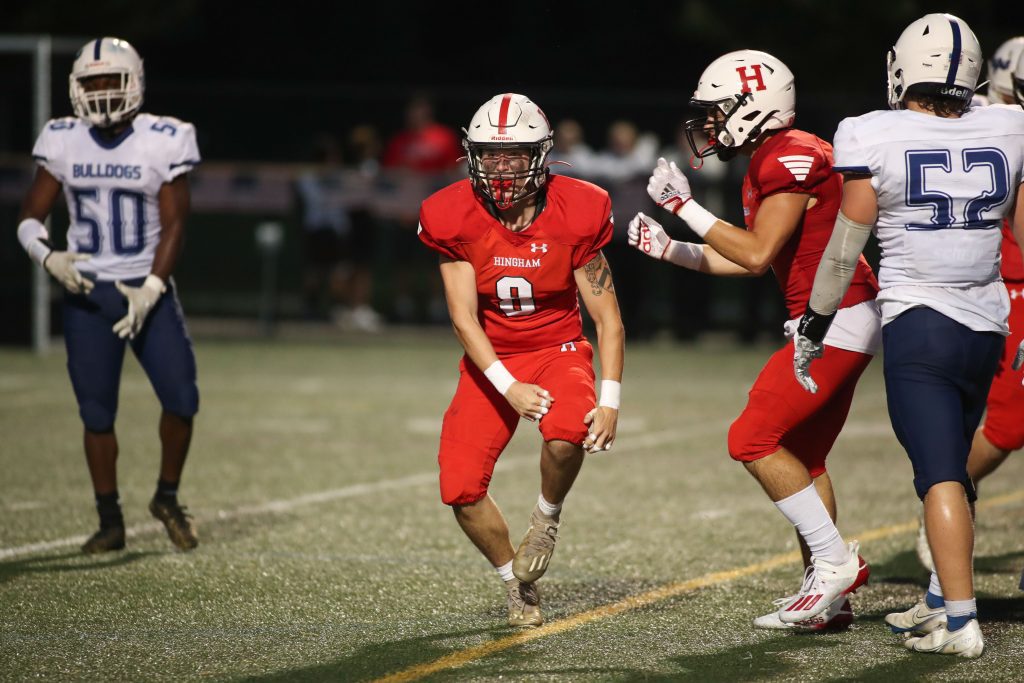 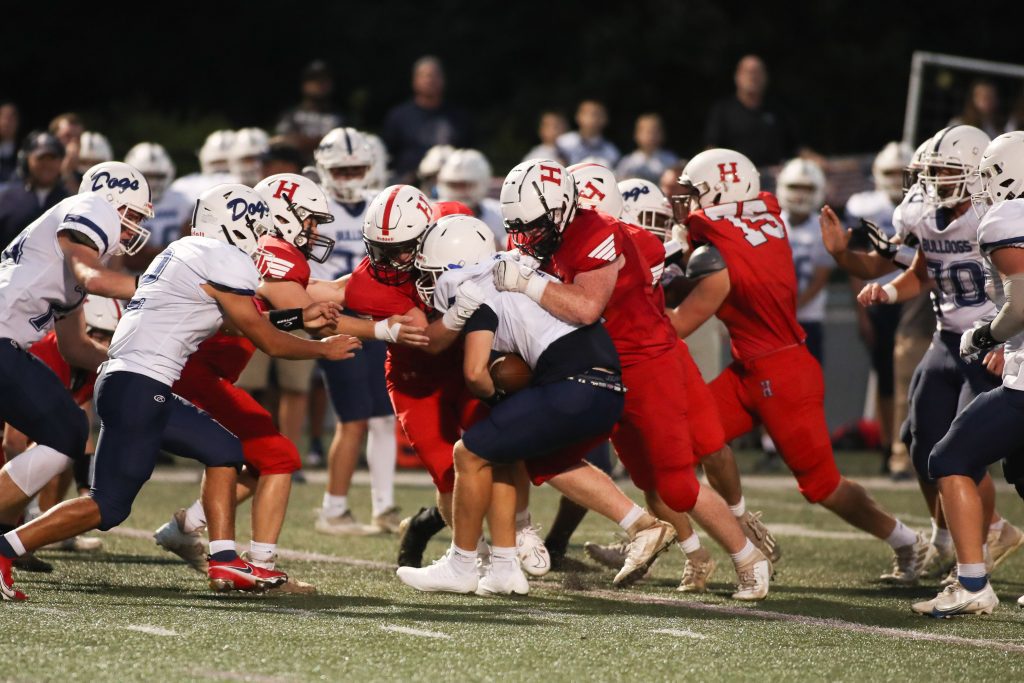 Junior Matt Kelly and senior Jayce Mellish stuff the line and drop the RB for a loss. 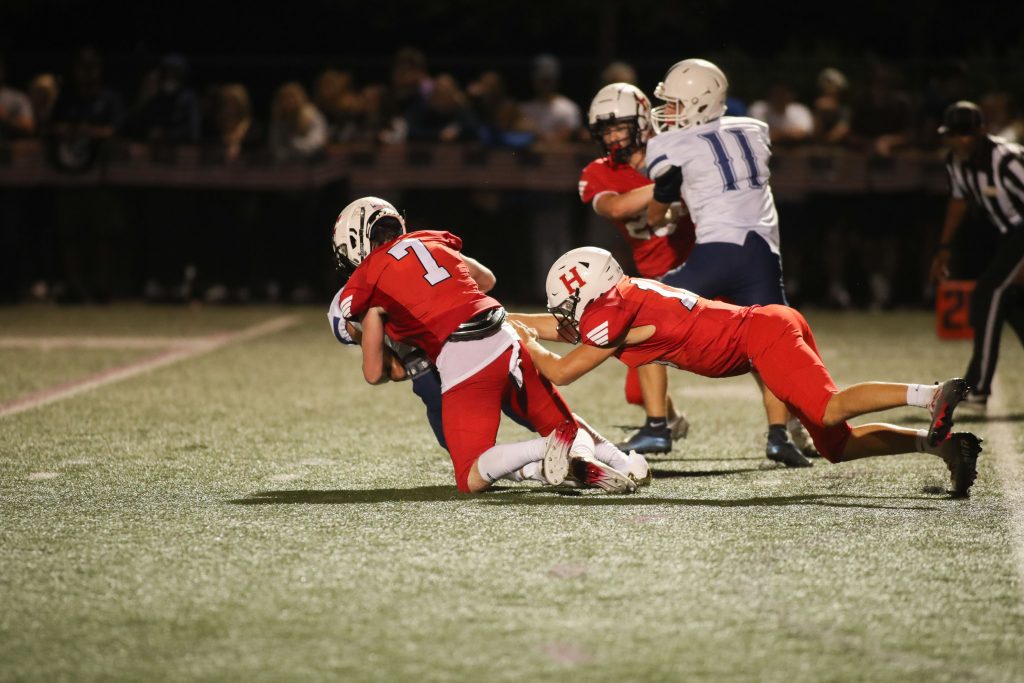 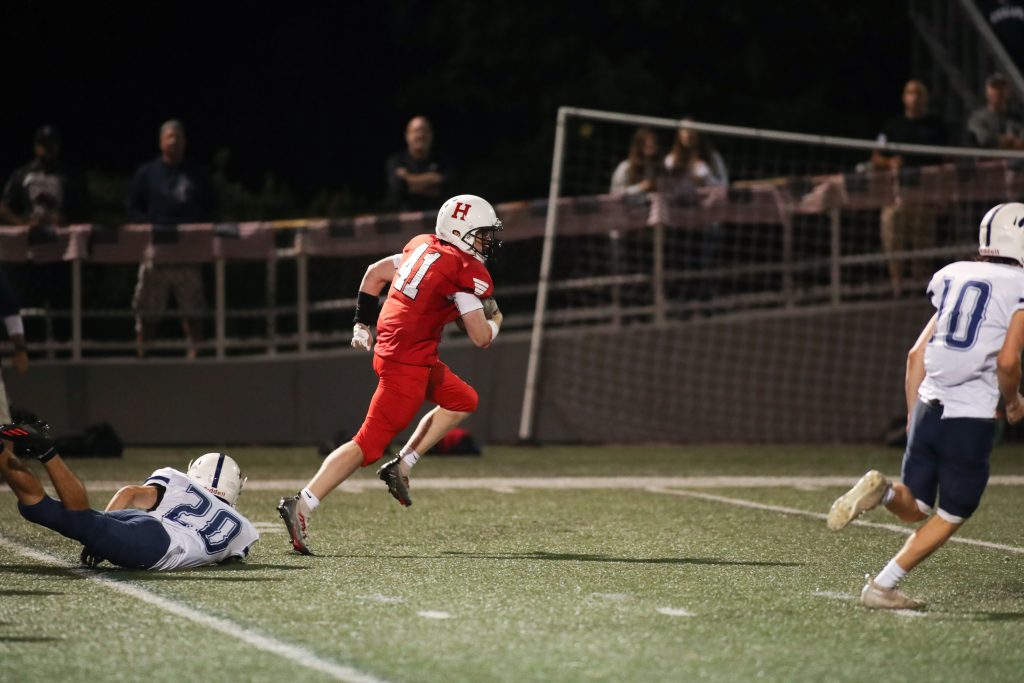 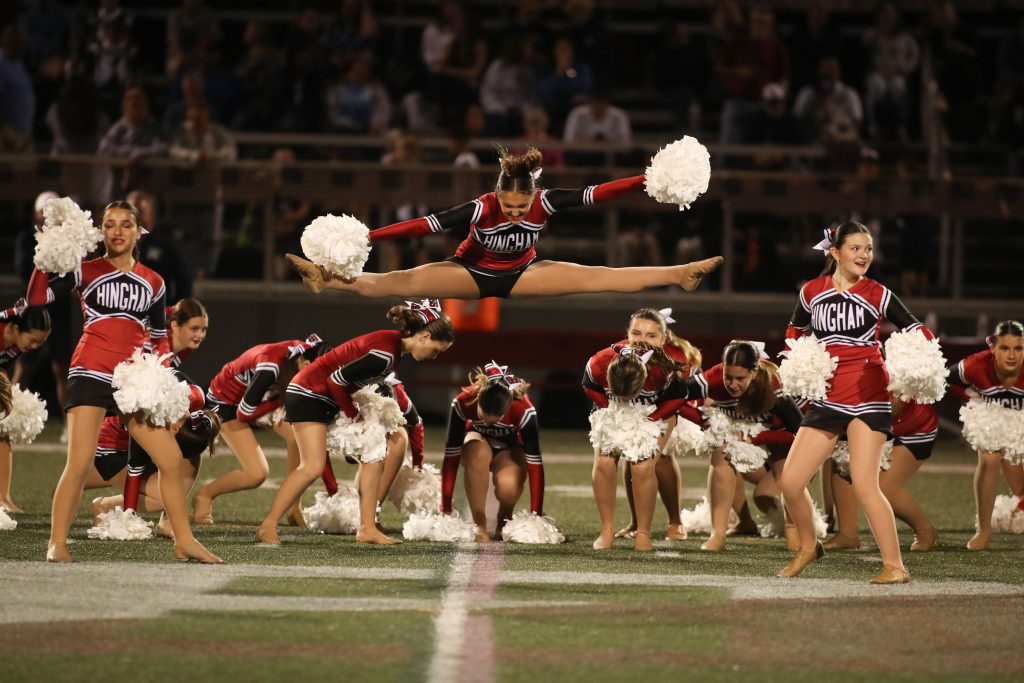