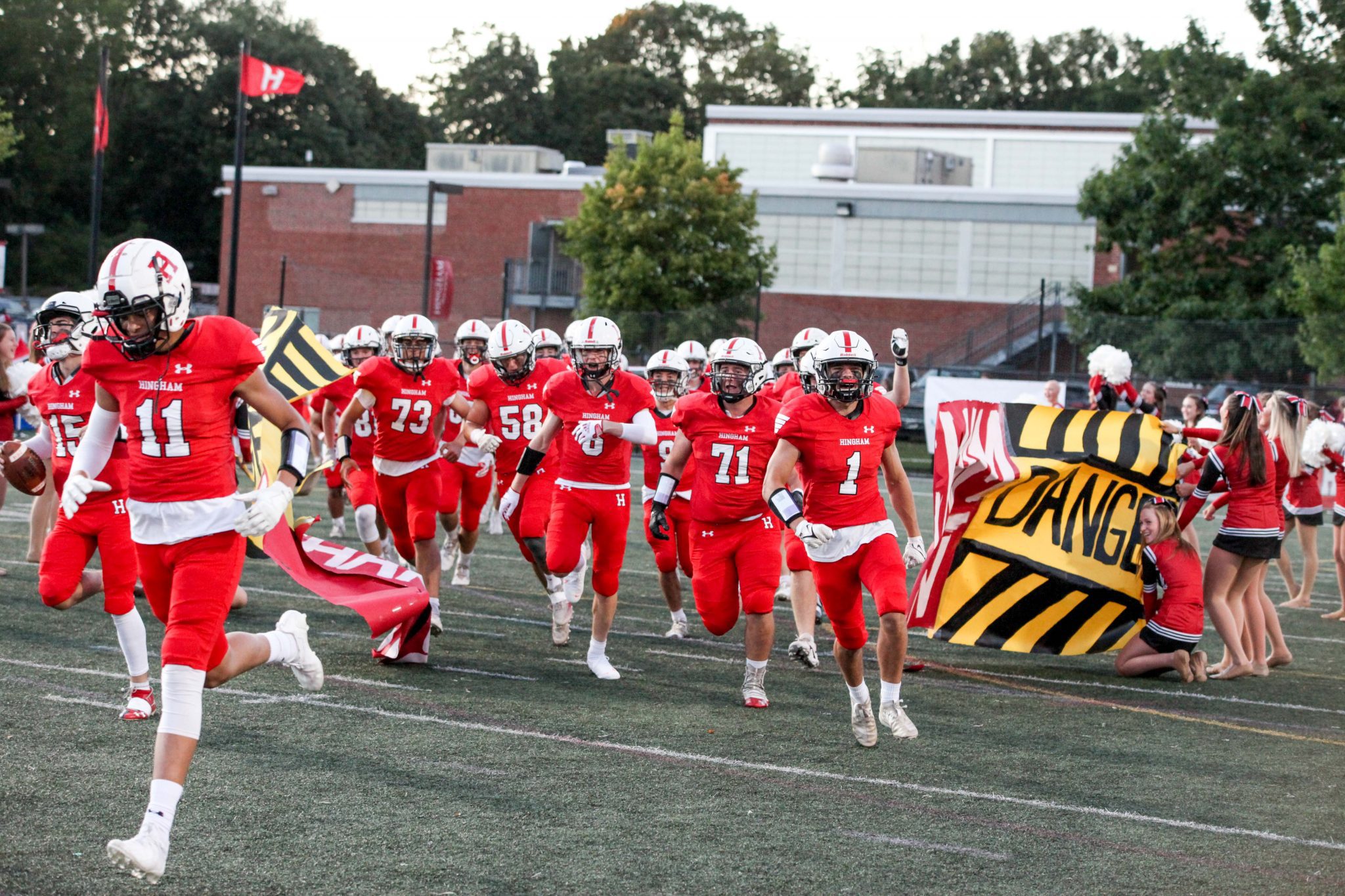 The Hingham Harbormen took the field for the first time this season on Friday night in a big win vs Braintree.

Last year, the Hingham football team had the longest layoff of any sport between seasons, 15 months.  This year, barely four months.  The short rest between seasons seems to have a positive affect on the team as they opened the season on Friday night with a convincing win against a tough Braintree team.

“The advantage for us is that we played a lot of young guys in the spring and they got five games of varsity football experience,” says head coach Mark Nutley.  “They got thrown into the fire and it’s already showing it’s benefiting us and them on the field.  It’s almost like we were able to have a spring practice.  So the stuff we put in, we are just refreshing it and it’s locked in on them, they know what they are doing, and they know their assignments.  It’s nice to see.”

The Harbormen were definitely locked in on Friday night.  In front a packed stadium for the first time in 2 years, Hingham came out with a little trickery and recovered a perfectly executed on-sides kick.  Senior Christopher Hern squibbed kicked ball 10 yards that bounced off the shoulder pads of a Braintree player directly into the arms of sophomore Carter Steele.  The opening drive ended with a TD run by senior captain Henry Crean.

Hingham tried another on-side kick on the ensuing kickoff that they almost recovered again.  The defense looked great right from the start getting a turnover on Braintree’s first drive.  Braintree tied it up at 7-7, but Hingham came right back to take the lead in the second quarter, this time with a receiving touchdown for Crean from a great pass from Senior Dylan Pierce.  The Harbormen closed out the half another on-sides kick recovered by senior captain Will Griffen resulting in a Harry Bradshaw field goal giving them the 17-7 lead.

“We had two weeks to prep, three weeks to prep honestly, let’s give it a try,” Nutley said about the on-side kick attempts. “It was there all day for us and that keeps them out of the kickoff return game too, which is nice.”

There was no let down in the second half for the Harbormen, especially Will Griffin, who continued to be all over the field.  In addition to recovering an on-sides kick in the first half, he made a number of big plays on defense and carried the ball late picking up important yards and moving the chains when the team needed it.  Griffin wasn’t the only senior making plays.  Fellow captains Cian Nichols and Owen Richards made their presence felt as well.  Nichols increased the Harbormen’s lead in the second half with a nice TD run and Richards was making plays on the defensive side of the ball all game.  The final score was 24-7.

“I love the game. I live for the first game (of the season). It’s the best day of the week. Friday nights, I love it.  I love being out here,” says Griffin after the game. “It’s awesome, just playing with all my brothers.  We really bonded this past year year because of Covid.  We’ve just been grinding together.  It’s great to be under the lights again, the town of Hingham behind us for the first time, it’s unreal.  We haven’t had this since sophomore year.  It’s been nuts.  The energy was awesome.  The atmosphere was great. I couldn’t have asked for a better game with my teammates.  It was so fun.”

Coach Nutley spoke highly Griffin and the rest of his seniors after the game as well.

“I call him ‘big guy’,” Nutley said of Griffin.  “He’s an animal for us when we need some big plays.  Our senior leaders are phenomenal.  Him, Owen Richards - the kid’s all over the field, Dylan our quarterback, Henry Crean and Cian Nichols,  and all our seniors.  They stepped up huge for us tonight.”

Next up for Hingham is Arlington away on Friday night.

“I know nothing about them honestly,” coach says. “I have’t seen them since I was in high school in Quincy, so I know nothing about Arlington.  They were tough getting a game week two, they reach out to us and I said ‘yeah, let’s play.’  We’ll even go to you.  We’ll get the film tonight or tomorrow and break it down and see what they got.”

It’s clear that coach and his players are happy to be under the lights on a Friday in front of a pack house no matter who they play. 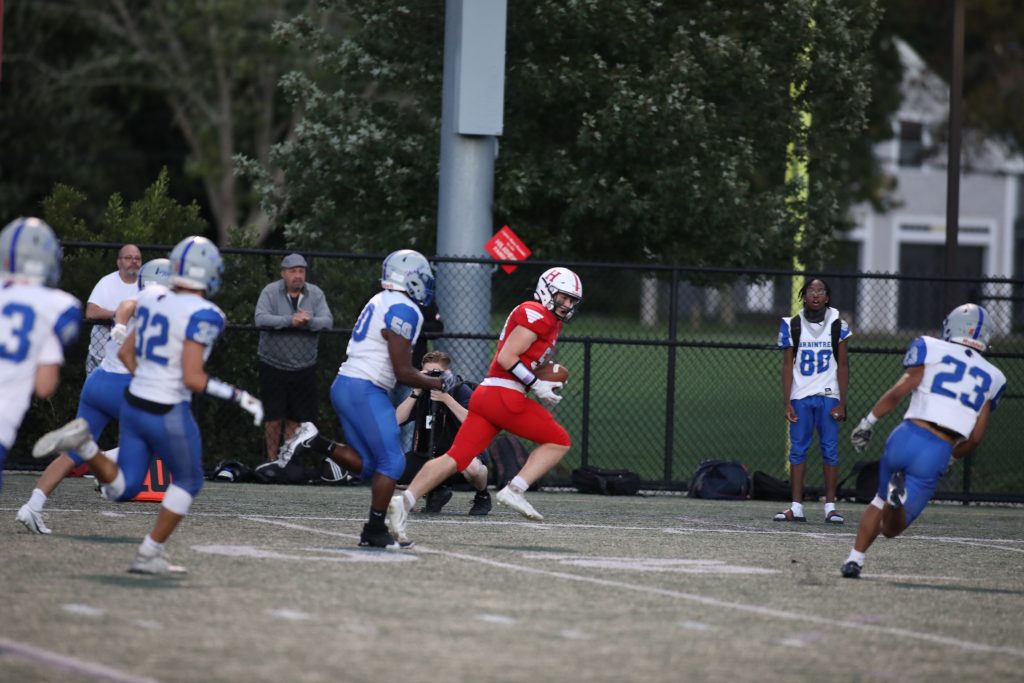 Sophomore Carter Steele picks up the loose ball on the opening kickoff's on-side kick. He walked into the endzone, but the rule is that there is no advancement. 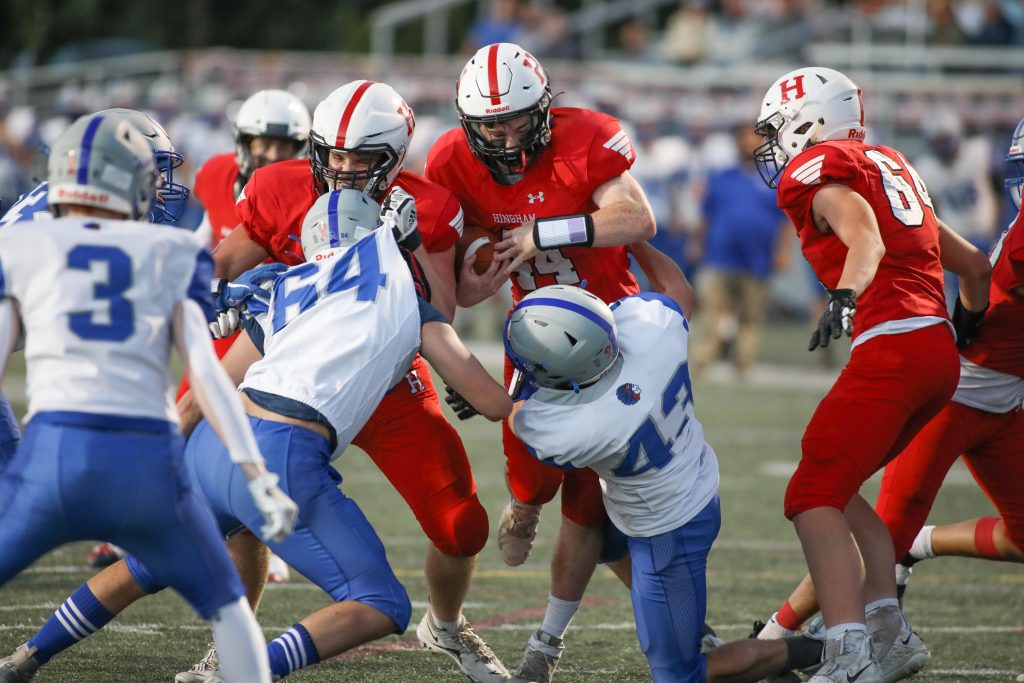 Senior captain Will Griffin barrels over a defender in the first quarter. 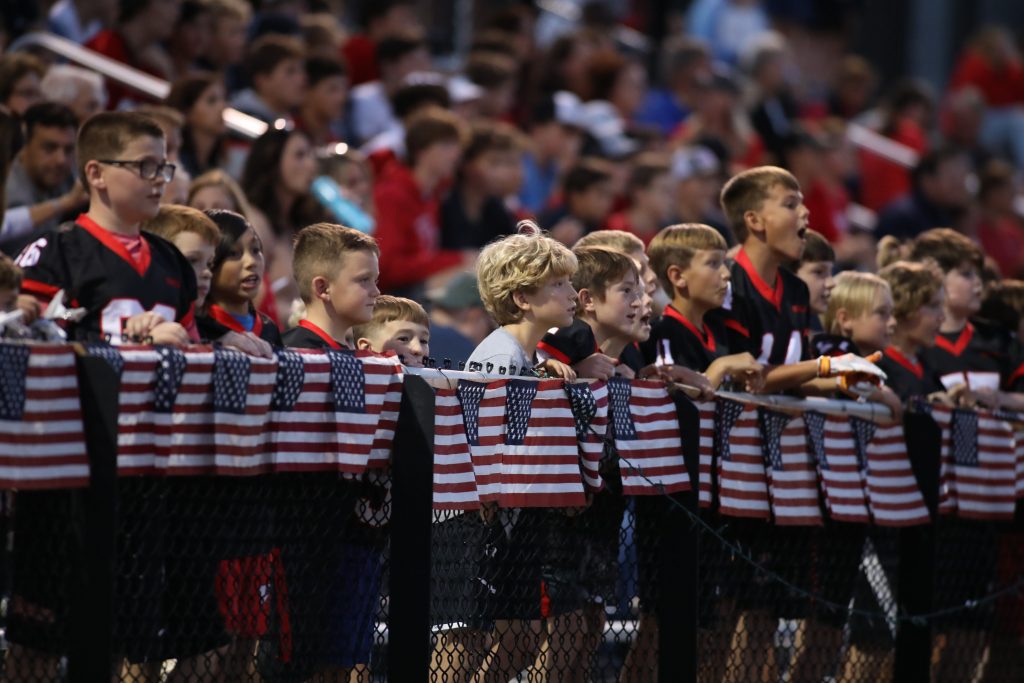 The stands were packed with Hingham Youth Football players cheering on the high school team. 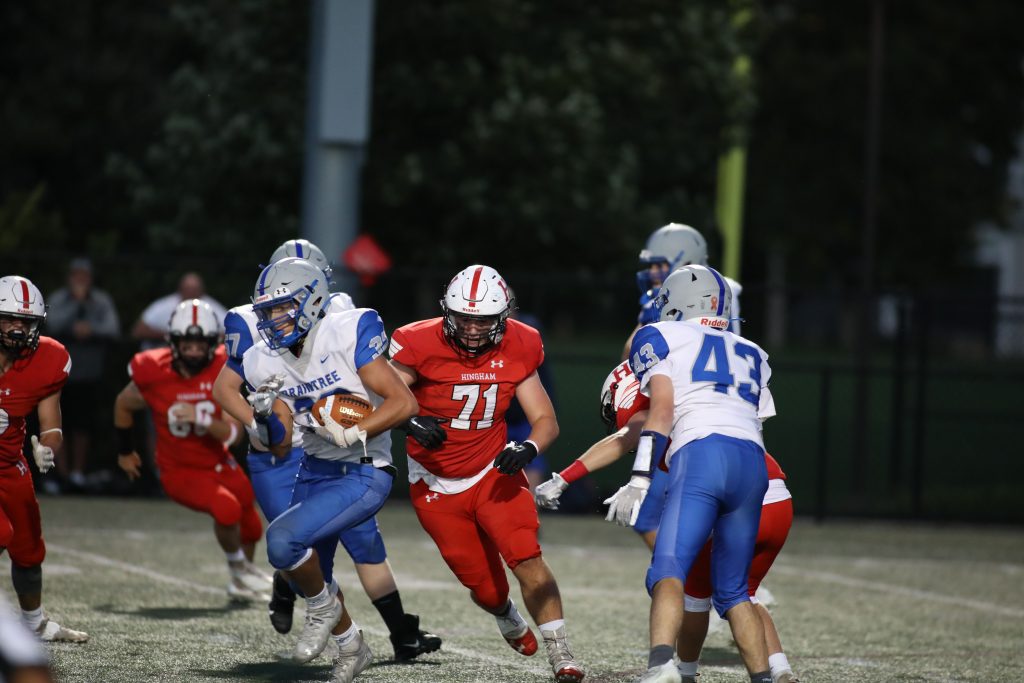 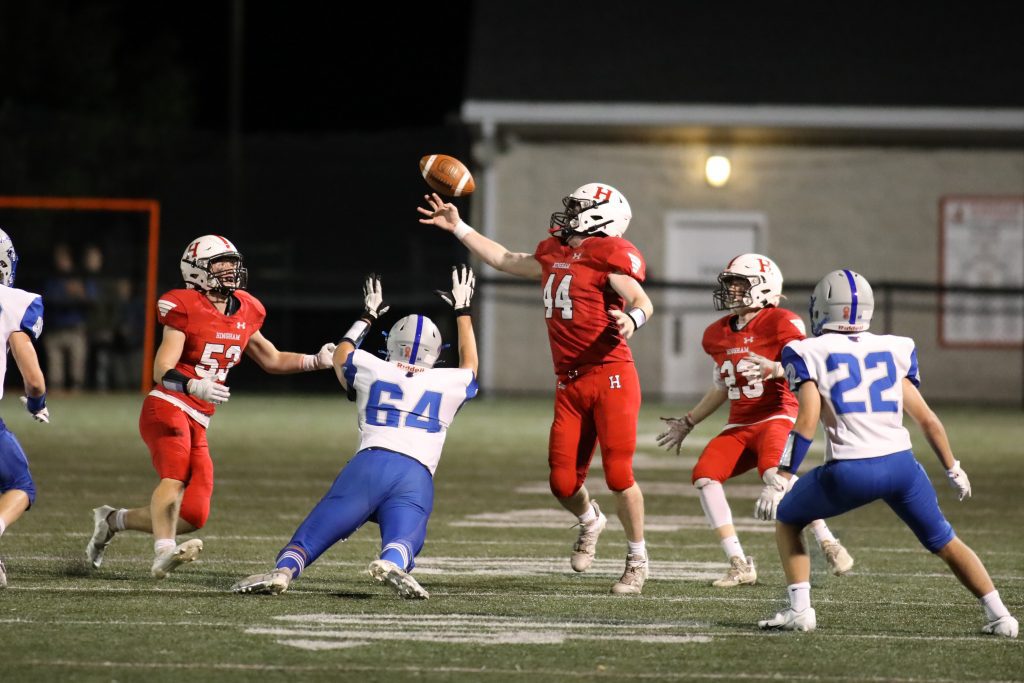 Will Griffin tips the ball to himself on an on-sides kick recovery. 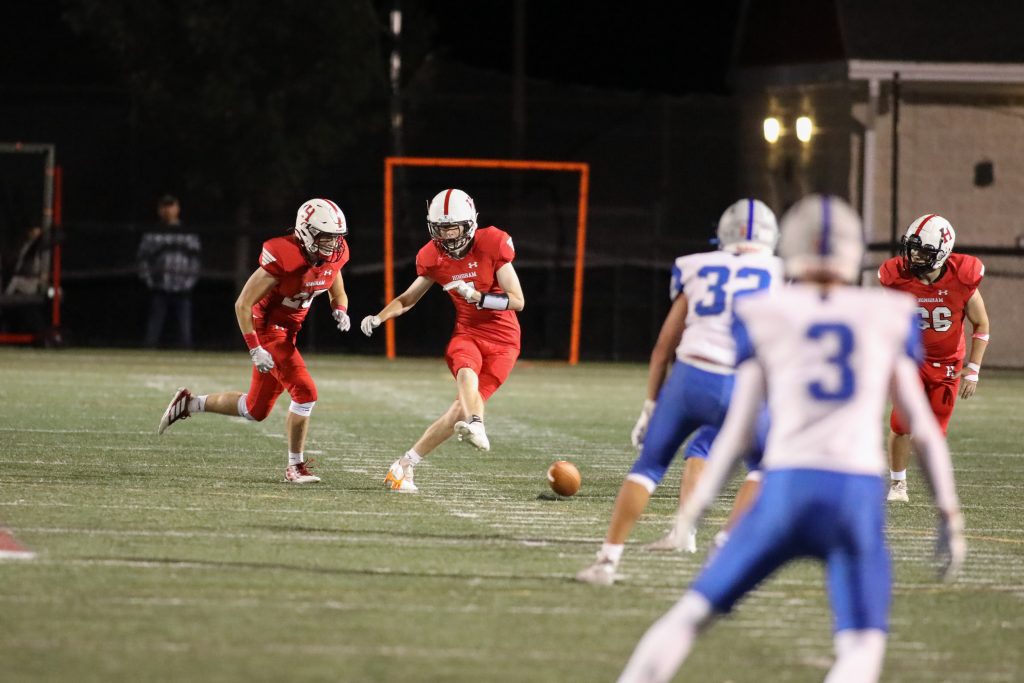 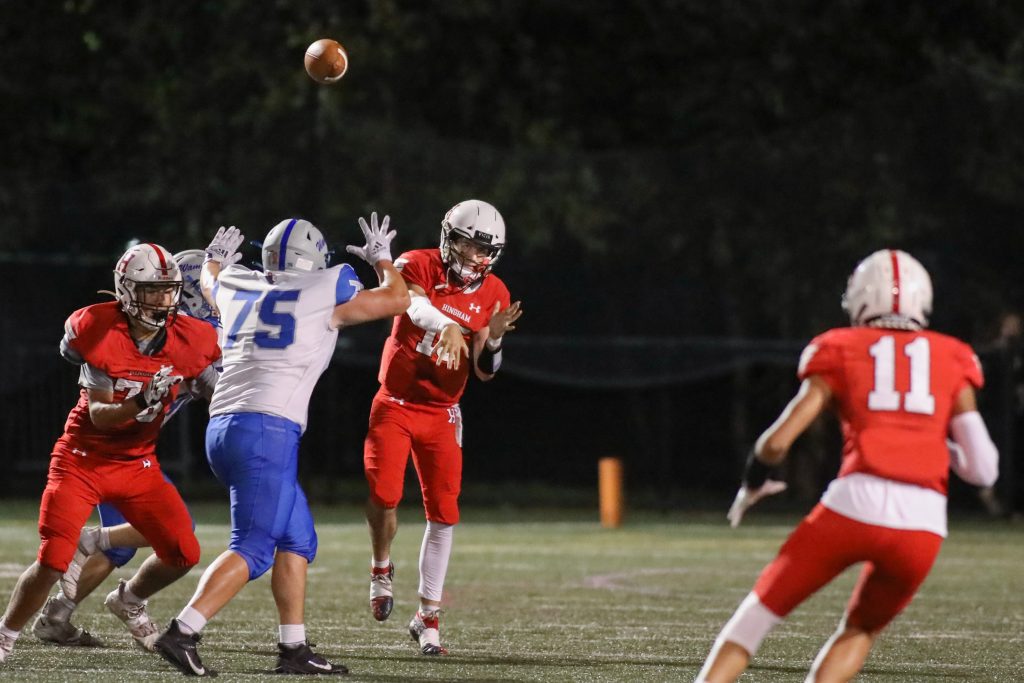 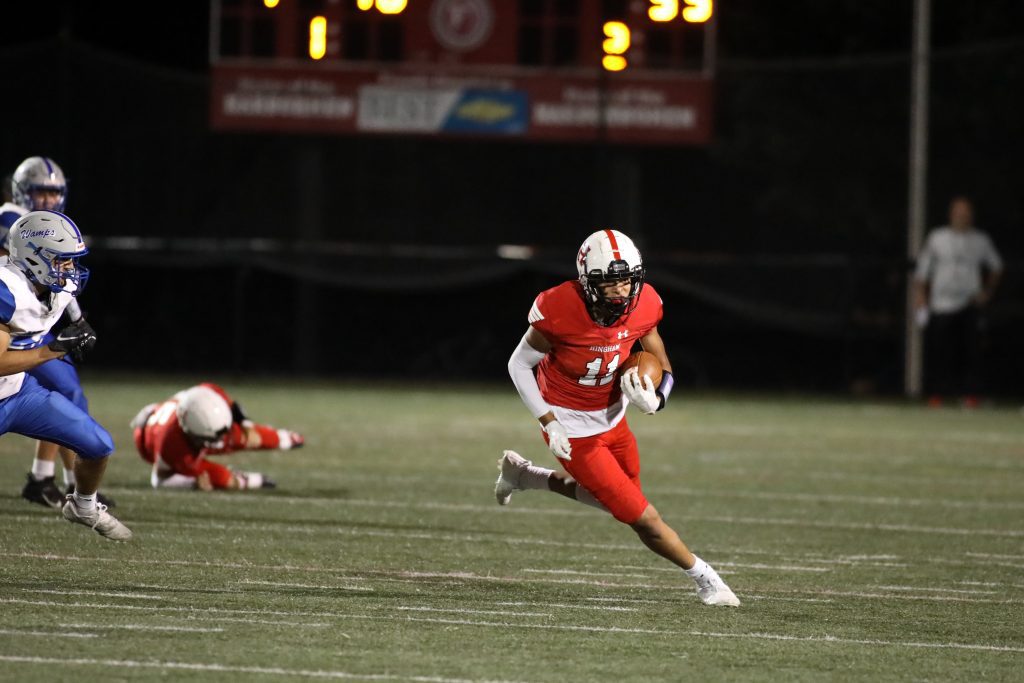 Senior Jonathan St. Ange had multiple catches during the game. 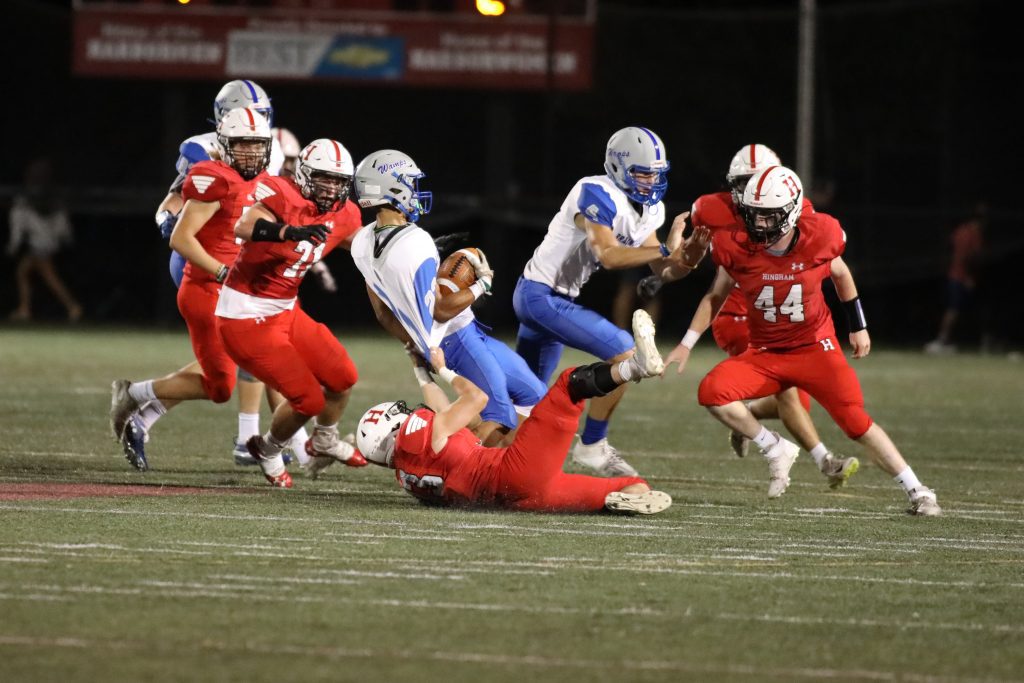 Junior Ronan O'Ciardubhain drags the quarterback down from behind to make the tackle. 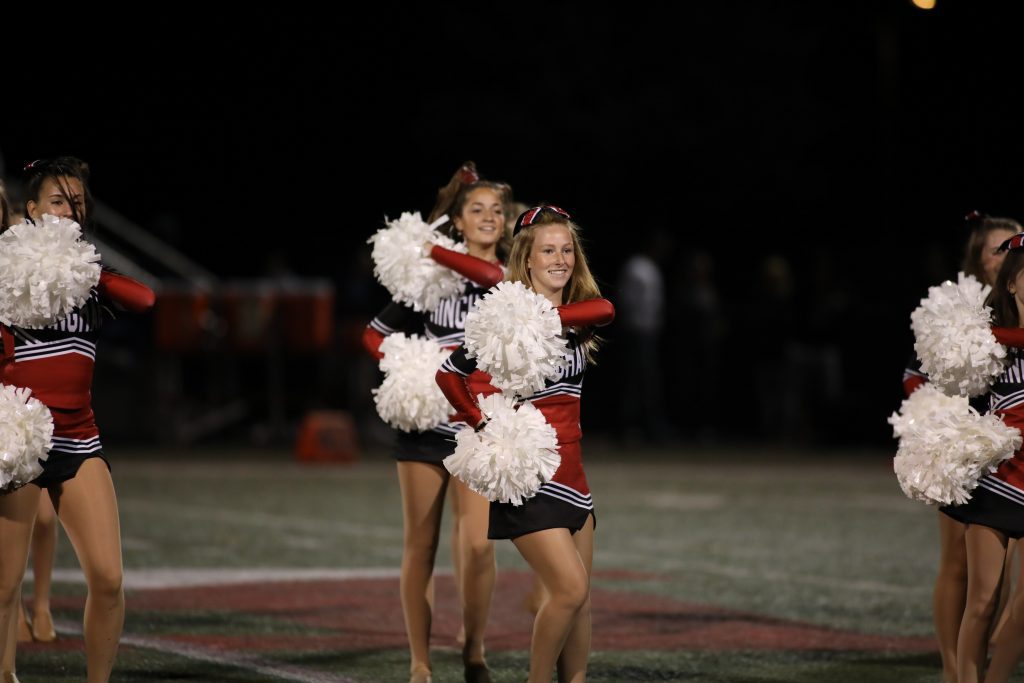 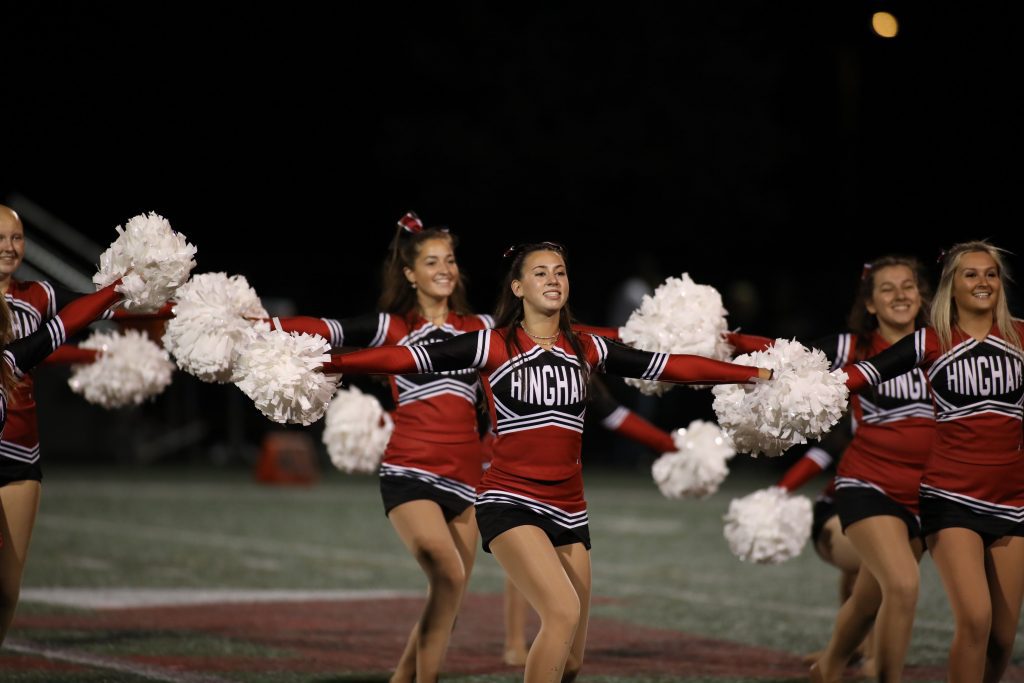 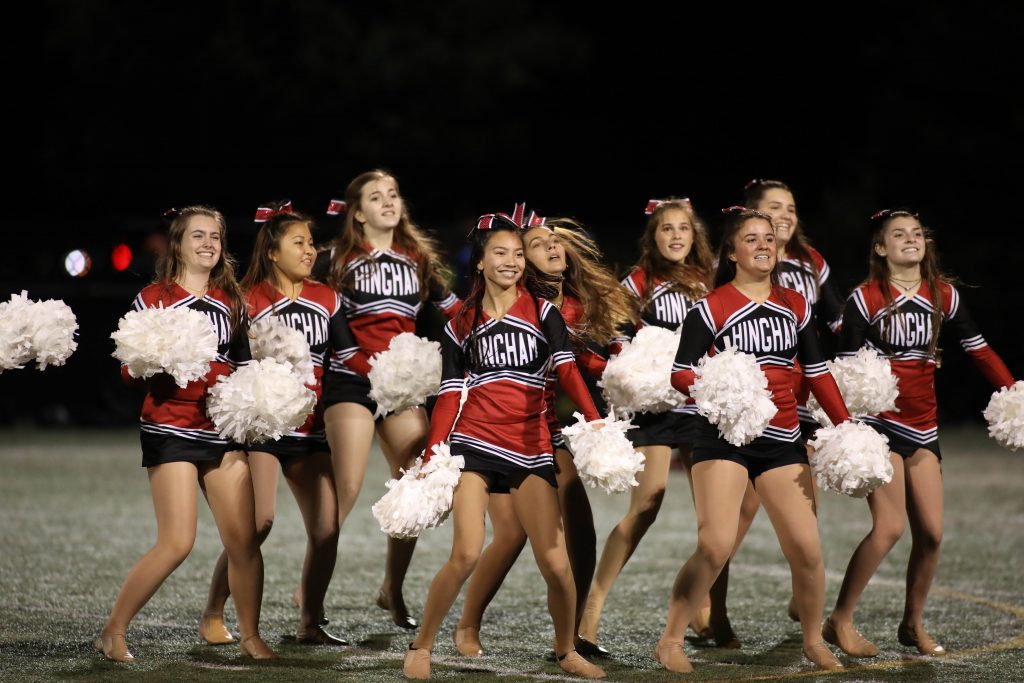 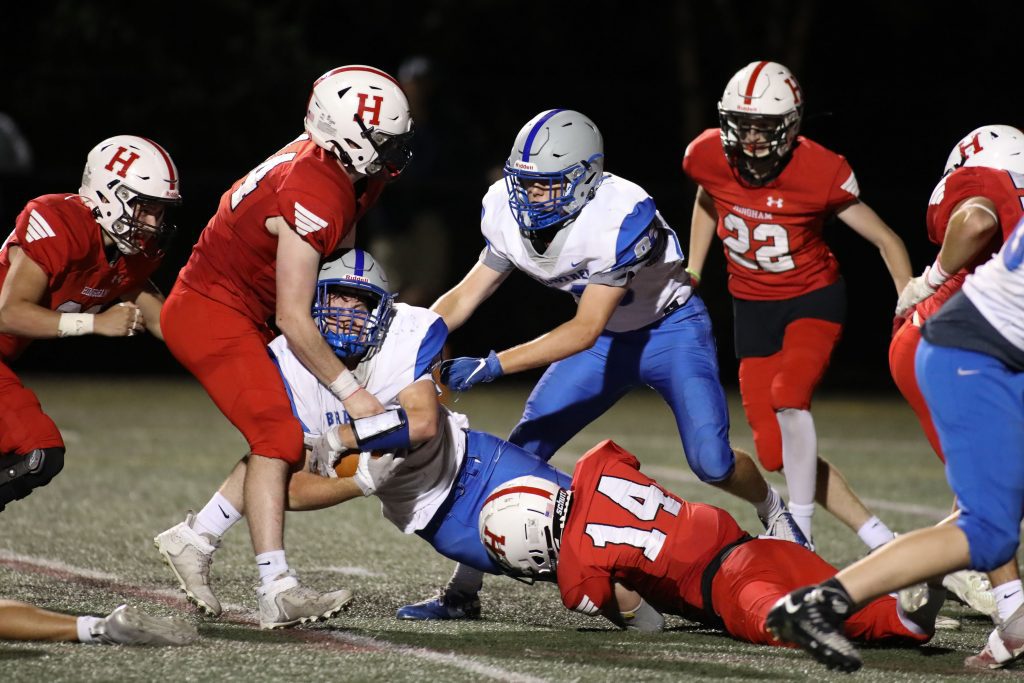 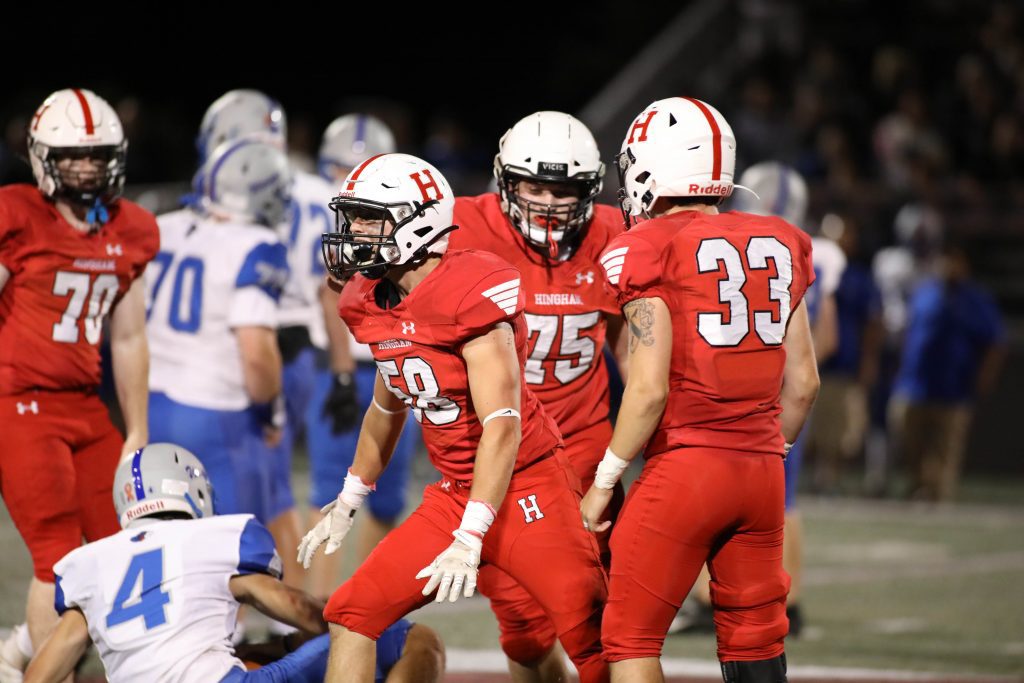 Senior Henry Drinkwater celebrates his sack in the second half. 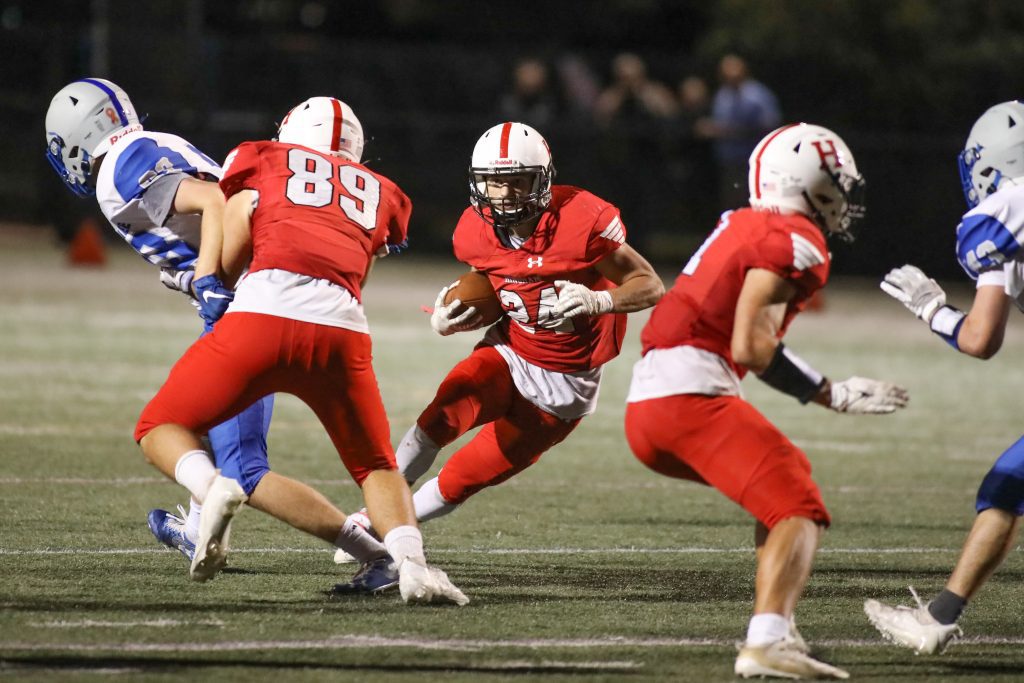 Senior captain Cian Nichols cuts back through a hole in the line. 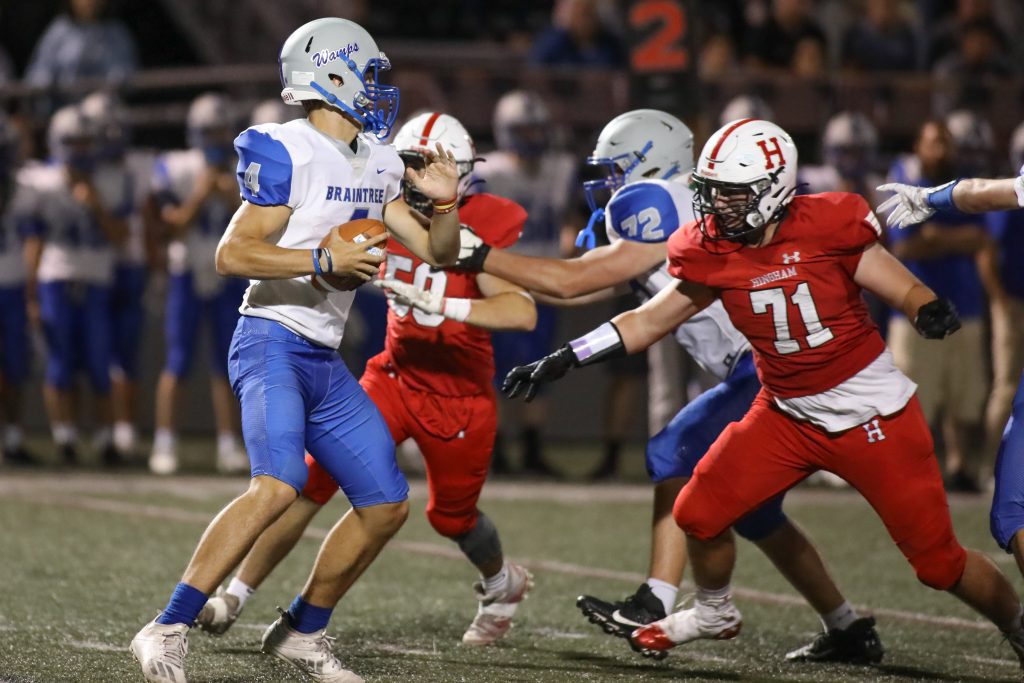 Senior captain Owen Richards rushes up the middle for another Harbormen sack. 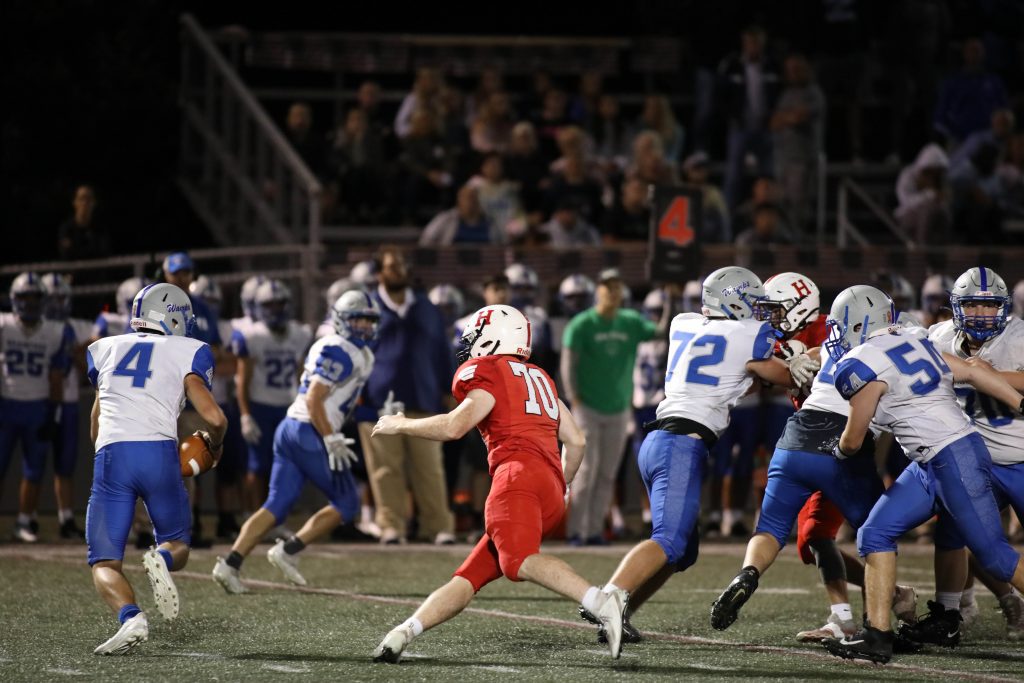 Sophomore Matthew Kelley breaks through the blocking at the line recording a sack of his own. 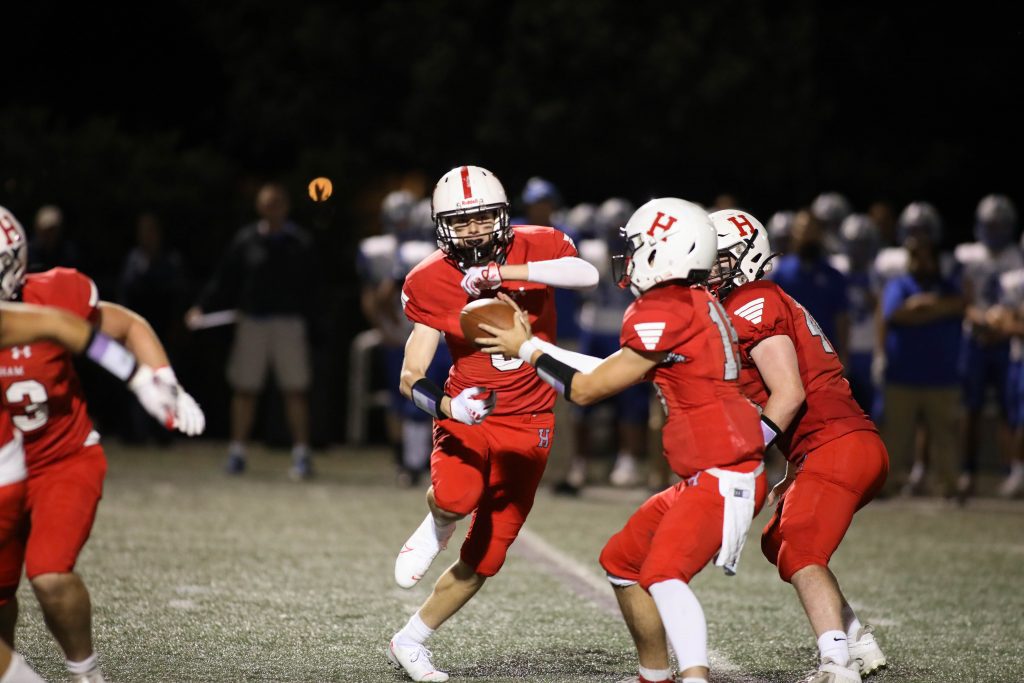 Senior Nick O'Connor with the handoff late in the game. 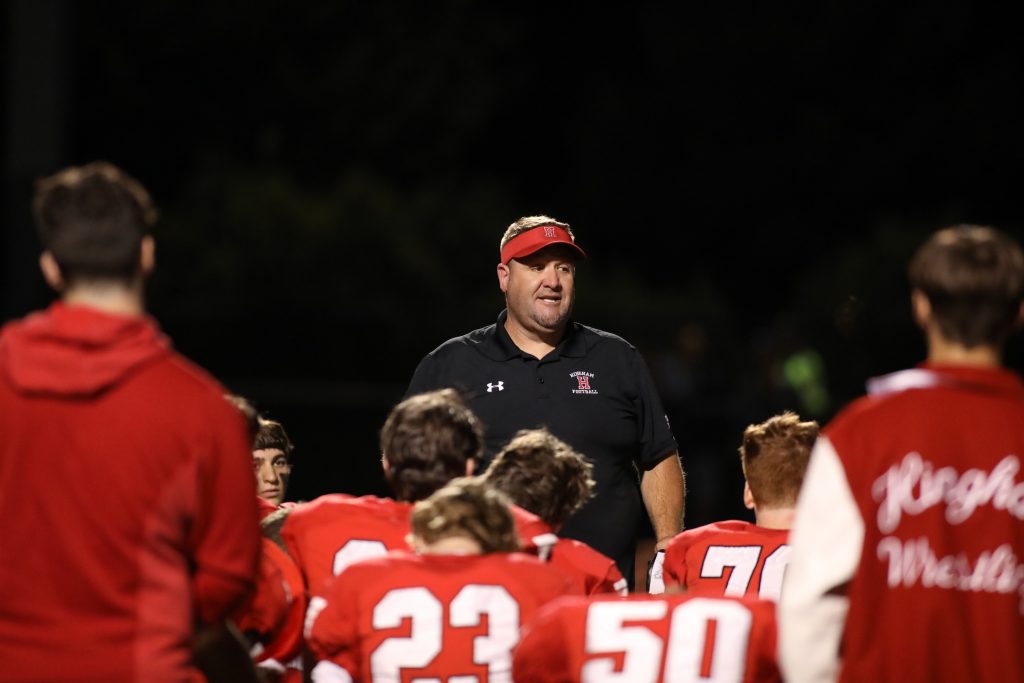 Coach Nutley was happy with his team's performance after the game.