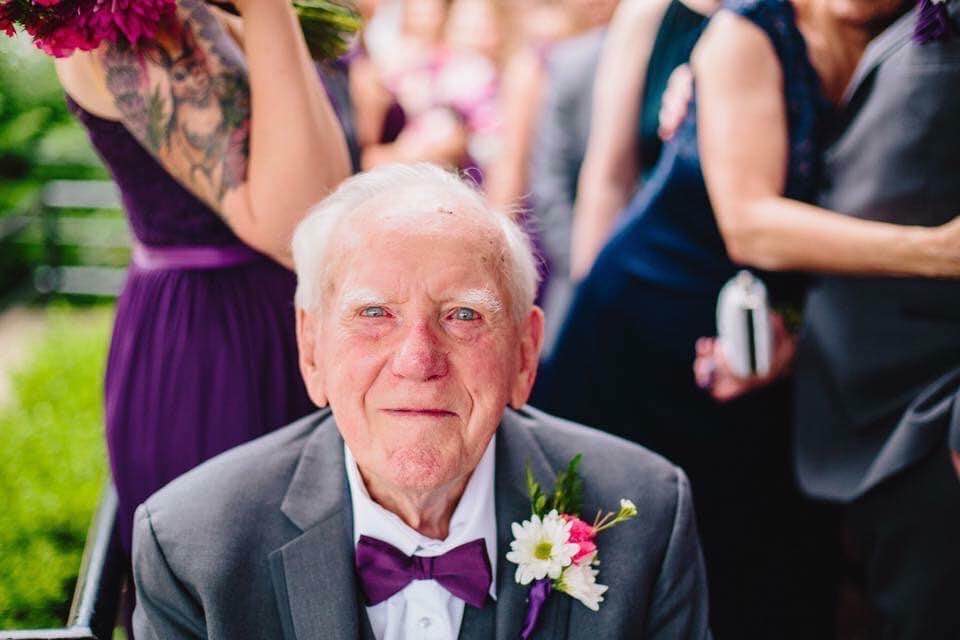 George Irving Davis maintained a youthful spirit and a zest for life throughout his 103 years, 70 of which he spent in the same house near Hingham Centre.

Davis -- who passed on earlier this month -- was affectionately known as "Grandpa" to his granddaughters, Brittany Francis and Jillian O'Sullivan, who shared many happy times with him. 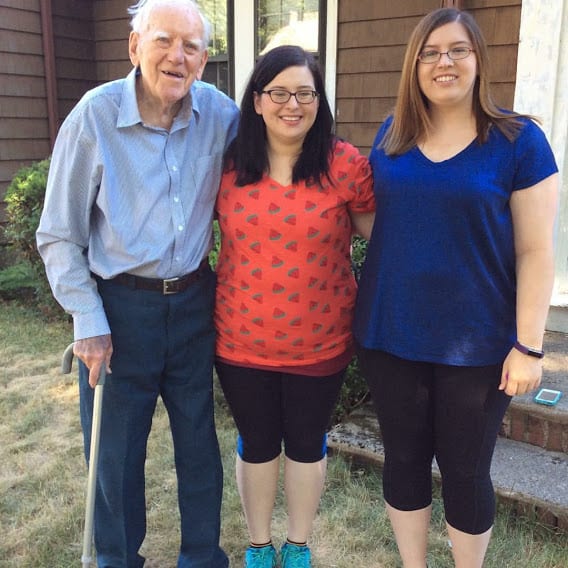 He was also known around town as a friendly gentleman who waved at cars that passed by the end of his street and who struck up conversations with passersby.

What Brittany admired most about her grandfather was his love for others.  "He always said his favorite thing about my grandmother was her 'friendliness.' He would say, 'Oh, that Grandma of yours, she was friend to everybody.' I think he emulated that quality, too."

Among his most admirable characteristics were patience, a strong love for his family and others, intelligence, resilience, grit, compassion, his work ethic, and his problem-solving capabilities.

Brittany and Jillian appreciated his ability to listen carefully to everything someone would say and really try to understand their perspective before giving his opinion. "He gave excellent advice," Brittany said. "I appreciated his love of learning, which he fostered in my sister and me as well."

Following in their grandfather's footsteps, Brittany -- a special education teacher at Reading Memorial High School -- and Jillian -- Stroke Coordinator at Beth Israel Hospital -- both love learning and sharing their knowledge with others."Grandpa was an ageless type of person and an active member of the community," Brittany said. "He was very joyful and never complained about anything." 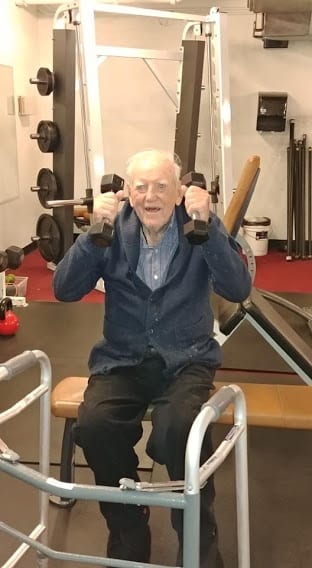 She shared what she thinks was his secret to longevity. "Grandpa kept his mind and his body healthy."

Up until COVID-19 caused the temporary closing of the Hingham Rec fitness center -- located near where he lived -- he exercised there until age 102. When asked how he was, he often responded: "full of pep, vim, vigor, and vitality!"

Her grandfather would work out until closing time so he could walk the gym attendant to her car to make sure she was safe. "It didn't matter that he was 102. They had a really sweet friendship, and she would bring her dog to visit him. He LOVED dogs!" according to Brittany. 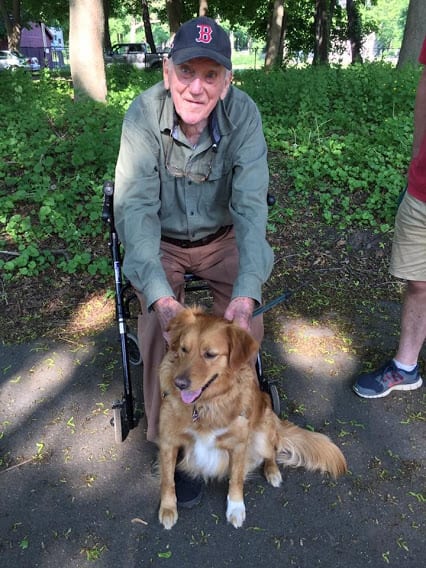 Because she was so close to her grandfather, Brittany has many happy memories. One of her earliest is of the "fake argument" they had about dandelions. "Grandpa didn’t want the dandelions growing on his lawn, and I thought dandelions were beautiful," she remembers. "I would pick any dandelions I saw from his lawn and give them to him in bouquets. He would pretend not to like them, but then he’d put them in a little vase on the table." 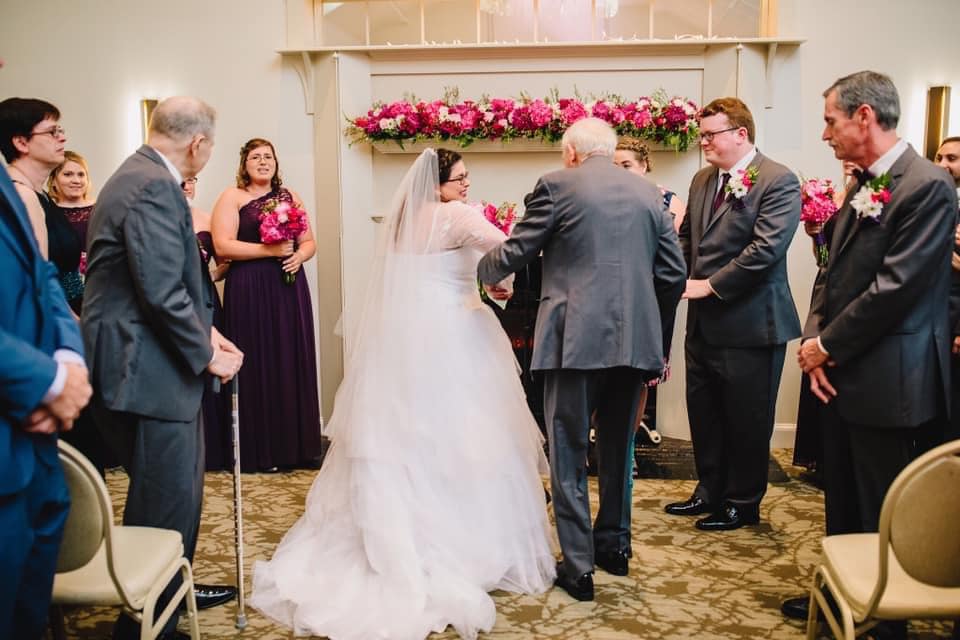 Another memory is of her grandfather collecting ads and junk mail so that she would have a nearly-endless supply of paper to draw on the blank side.

He especially enjoyed dancing with Brittany and Jillian at their weddings. "My Grandpa walked me down the aisle and danced with me at my wedding when he was 99," Brittany said. "We danced a Texas two-step to Willie Nelson’s 'Sunny Side of the Street,' after practicing endlessly to get the dance perfect." He was 102 when he danced with Jillian. 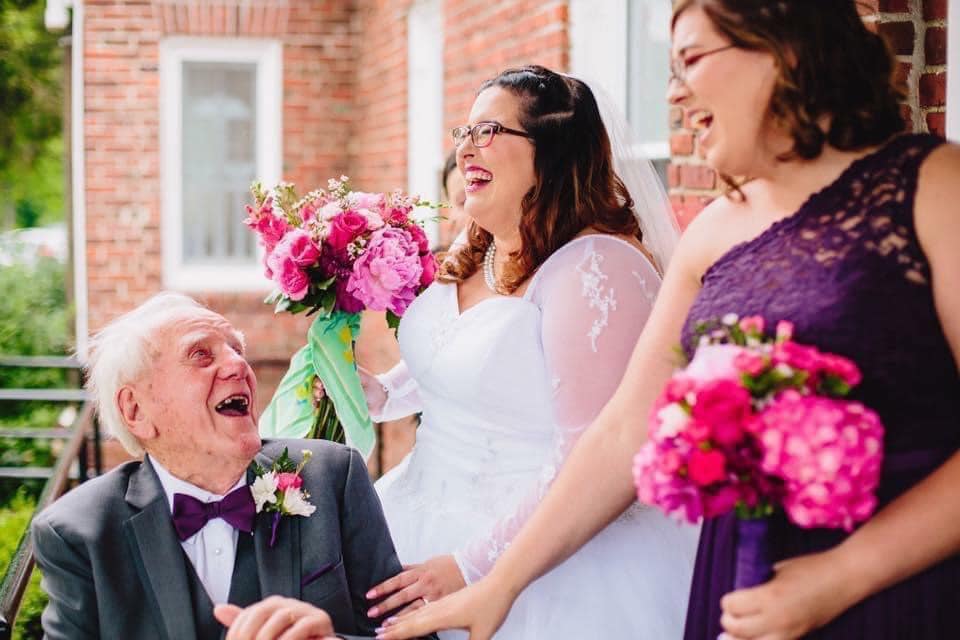 "Grandpa Davis" was no stranger to technology. "I remember him taking me to the library to teach me how to use a computer. He was extremely tech-savvy and was great at fixing my computer when I encountered problems," Brittany said. "Honestly, he was great at fixing everything. I also liked that he didn’t just fix things for you -- he would teach you how to fix it yourself." When she lived in Tennessee, her grandfather face-timed her regularly.

His love for learning never waned. "He took any class at the Hingham Public Library he could, mostly about computers," Brittany recalled. He also enjoyed discussing current events.
While part of a ham radio club, he was thrilled that once he turned 100 he got a free membership.

Brittany enjoyed a special relationship with her grandfather over the years and sometimes included him in her Facebook posts. 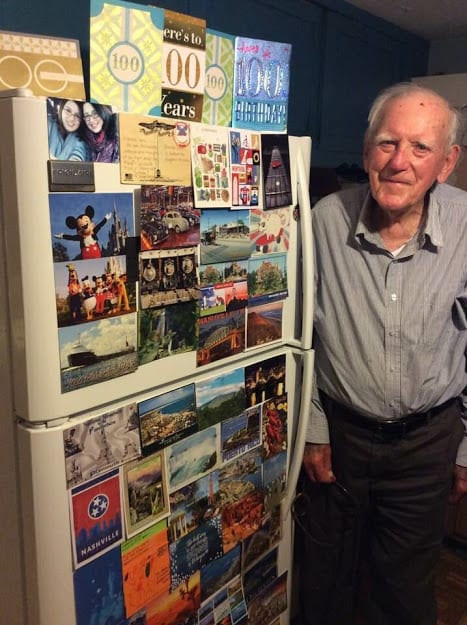 In honor of his 99th birthday, she recruited her family and friends to send him 99 birthday cards to help him celebrate. "He really enjoyed getting to know where my friends were from and what their connection was to me," she recalled. "He liked to learn more about the places they lived, which gave me the idea for my next project." 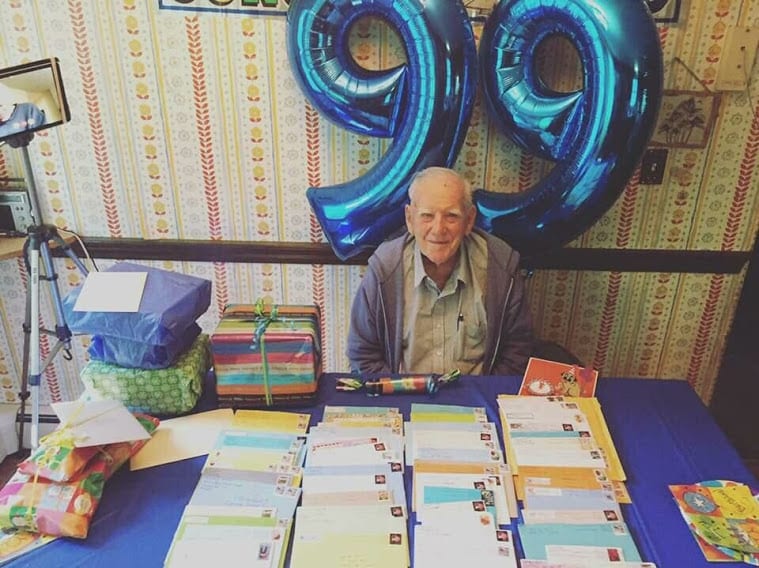 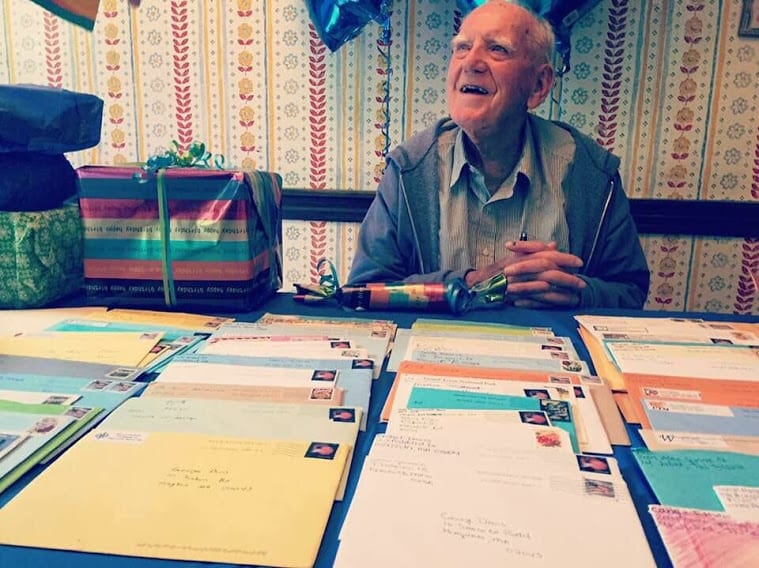 The following year, in celebration of his 100th birthday, Brittany asked friends and family members to send him postcards from where they lived and to also share interesting facts. "He got a kick out of that!"
For his 101st birthday, Brittany expanded her project to include the greater Hingham community, asking Hingham residents and community members (teachers, firefighters, police officers, and others) to send him birthday cards. "Grandpa received more birthday cards than I could count that year," she recalled.

The following year Brittany collected donations to pay for a bench dedicated in his and his late wife's honor as a gift to the Hingham Public Library. The plaque on the bench reads: "In Honor of George Irving Davis and Ruth Elaine Davis; Home again, home again, jiggety-jig.”

The donation was especially meaningful since her grandparents were loyal patrons of the Hingham Public Library for many decades. 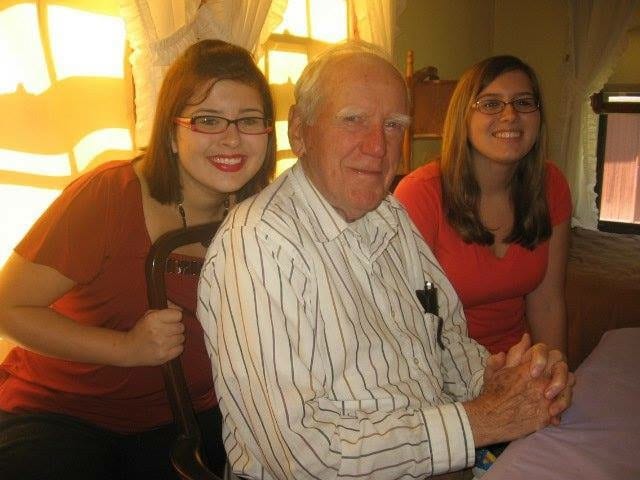 "My grandmother, who was a kindergarten teacher, enjoyed volunteering there. My grandparents would bring Jillian and me there almost every weekend. It was a special place to us," Brittany recalls. "It was like home. Every time we would arrive back at our house, my grandma would say: 'Home again, home again, jiggety-jig.' So I thought it was fitting to put those words on the plaque, since the library really did become a second home for us growing up."

Although her grandfather loved reading, he once told Brittany that he never once checked out a fiction book. "He only checked out books that taught him to do something. I found that really interesting!" she said. 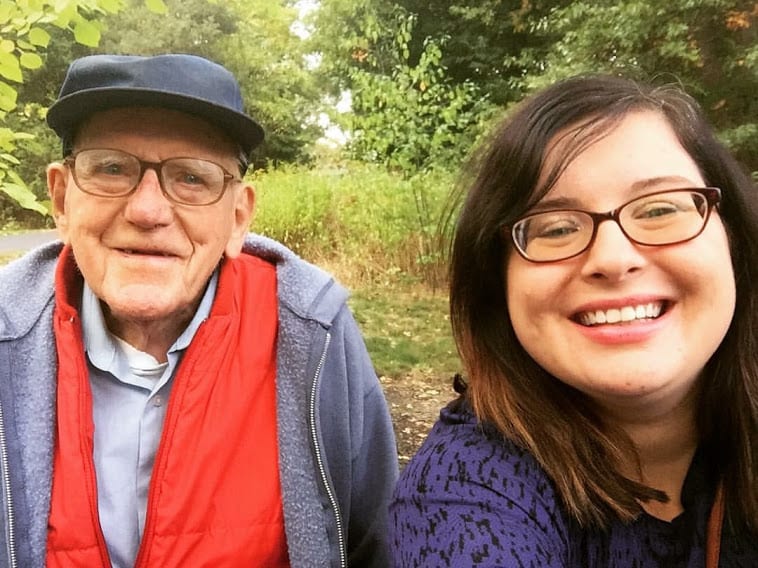 To celebrate her grandfather's life and passion for learning -- and his 70 years as a loyal library patron -- Brittany set up a GoFundMe page to accept donations to the library, https://gf.me/u/y8fgcs
Checks in his memory may be mailed directly to Hingham Public Library,  Attn: Memorial Gifts, 66 Leavitt St, Hingham, MA 02043.

What perhaps Brittany will remember most are the ways in which her grandfather made her life better and happier. "He believed I could do anything. That may sound corny, but let me break it down further: as a child, it is easy for adults to do everything for you, because it is faster, but he always took the time to show me how to do something myself, no matter how long it took. As an adult, I am confident that I can do anything, as long as I am patient with myself and work hard. That’s one of the greatest gifts he gave me."