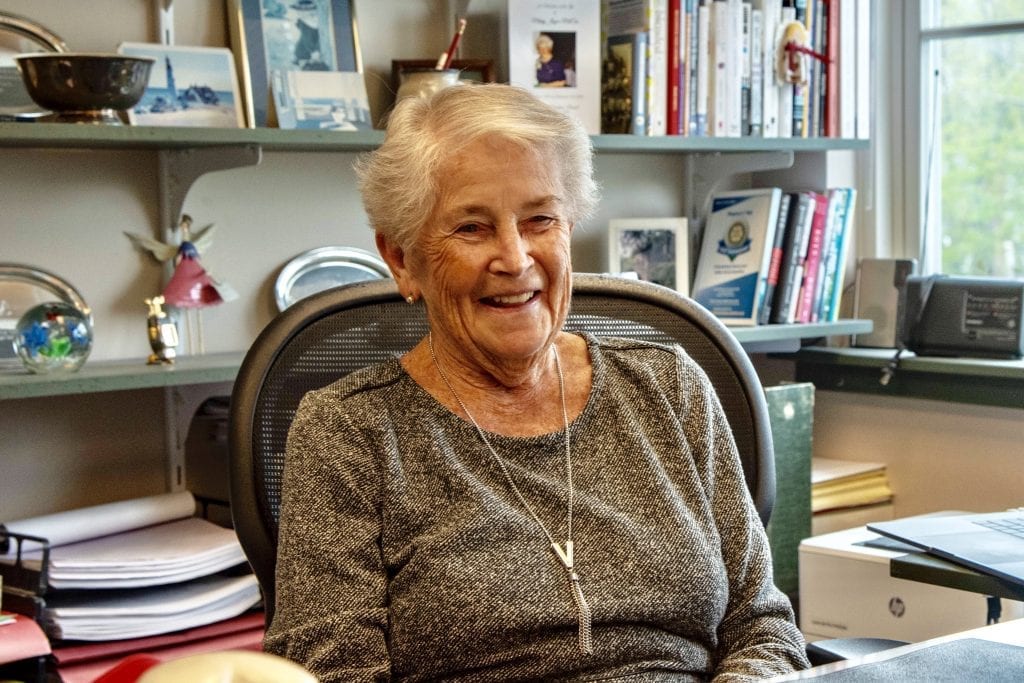 Supt. of Schools Dorothy Galo will be moving on to new adventures at the end of the school year.

During her 56 years with Hingham Public Schools, she has been known for her dedication and hard work in whatever position she held over the years. "I've always loved whatever job I was doing at the time," Galo said.

School Committee Chairman Michelle Ayer shared her heartfelt thoughts:  “Dr. Galo has had an extraordinary career in Hingham, and one thing I think is overlooked is that she is a trailblazer when it comes to women in the workforce. Dr. Galo graduated from Radcliffe at a time when only six percent of women in the United States graduated from college; she entered the workforce when only 33 percent of women worked outside the home; and even today, when 77 percent of school superintendents are male, she continues to chip away at the proverbial glass ceiling. Dr. Galo is an incredible role model for young women, and her leadership will be missed.”

Galo has had a positive impact on many lives and will be greatly missed, as evidenced by the number of farewell events that have been or will be held at each school and other celebrations of her well-spent time with the HPS leading up to her retirement.

As an example, first-grade Plymouth School students put together a book containing drawings and ideas of what Galo might do in retirement, some with what Galo quipped are "inventive spellings":

As part of a farewell campaign, Galo has been receiving letters daily from town officials she has worked with, parents, current and former students, and entire families. "I've been blown away at how personal they are, rather than just being thank-you notes," she said. "I've found that people know me better than I thought they did!"

But Galo is quick to spread around the praise, acknowledging others' roles in various accomplishments, including starting to offer full-day kindergarten several years ago. She's also proud of the HPS music and drama programs and the wide array of extracurricular activities and the Superintendent's Cabinet she created recently. "I meet with 10 to 12 hand-picked kids -- such as the president of the student council or the editor of the school newspaper -- to talk about what's on their minds -- how they see something in the news, and school and other issues," Galo said. "We meet occasionally in the School Department Conference Room in the evening to talk and enjoy pizza."

While she will miss the job and her many HPS friends and co-workers, Galo said "the time is right" for her to retire. "I'm thinking about what's next."
Looking back, Galo served as an educator in many capacities — math teacher, head of the math and science departments (at the same time), assistant high school principal, and assistant superintendent of schools (while continuing in her role as director of the math and science departments during tough financial times) — before her promotion to superintendent.

When asked what qualities make a good superintendent Galo responded: “Patience, not taking everything personally, and a love for what you are doing,” among others.

Interacting with administrators and other staff, parents, and students is something she enjoys. While kids have basically always wanted and needed the same things — to be cared for, loved, and protected — times have changed with the introduction of technology into children’s lives at an earlier age, the  nearly-endless choices of extra-curricular activities with little time to play in their own backyards, and more two-income families. That said, parents are doing the best they can to juggle their many obligations and activities, Galo said.

There are different stresses now from when she was a parent. "With often two parents working, much of their lives are taken up with feeding their children, making sure they do their homework, and putting them to bed," Galo said. "Getting involved often centers on their own children rather than attending parent information meetings, for instance. It's not that they aren't interested, [they're just too busy]."

That said, there are still many parent volunteers performing a variety of tasks, including serving on PTOs and helping out in other ways.

The increased use of technology at an early age has its good and not-so-good sides, Galo observed. "There are a lot of [beneficial] uses, particularly with providing children with different ways to learn and engaging students," she said. "But it also gives kids easy access to acts of violence and unkindness, so use of technology should be [overseen by parents]."

During her time with the HPS, Galo has been involved with a number of major new school building projects and renovations as part of a collaborative effort  — from the new East School to major renovations at the Middle, South, and the High School. In a trip down memory lane, Galo recalls spending her freshman year in high school in what is now the Town Hall. That building initially served as a high school and later as one of two junior high schools in town during a time of peak enrollment.

What makes HPS special and successful, Galo said, is the fact that there is a K-12 director for each department, providing continuity in students' educations; great support from parents and the entire community, who place high priority on providing an excellent education to every student; and high-quality staff with excellent leadership skills and a shared vision of overall high expectations.

In retirement Galo looks forward to playing more golf, doing more walking, and spending more time at her Florida condo. "I have owned it for 20 years but have never spent 10 days there at a time," she said. "I'll have more time to do that now."

In the meantime she has been wrapping up final details of her job and has been meeting periodically with the new superintendent, Paul Austin -- who is currently a school superintendent in Maine -- to help him get acclimated to the school system. "He has already spent a lot of time here and has been doing a great deal of research about the HPS," Galo said. "I enjoy working with him. We have a lot in common, including an interest in hockey."

Austin takes over the helm of HPS starting July 1.