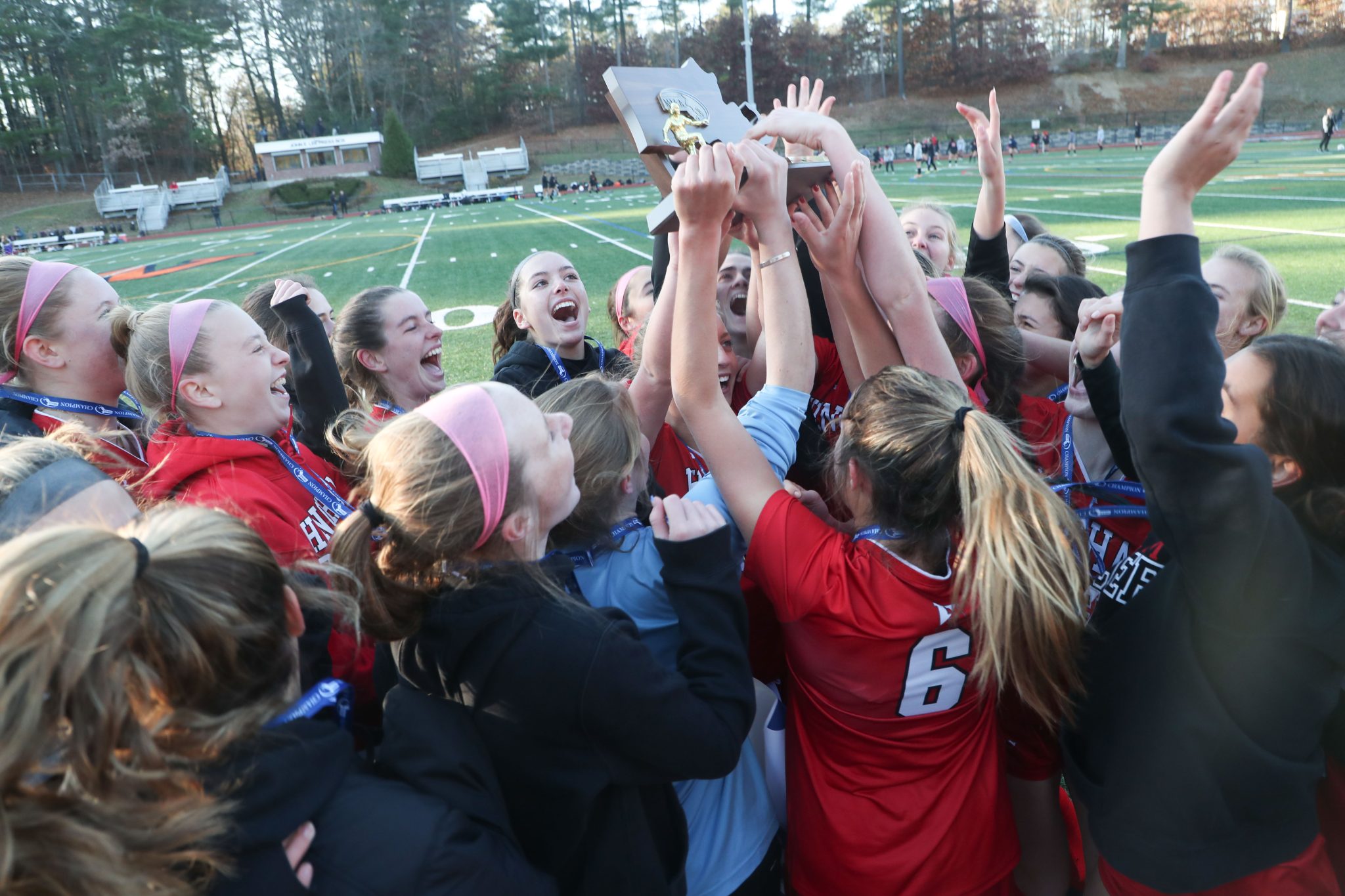 This team is not last year’s team.

This is the message head coach Mary-Frances Monroe has reiterated to her players from the start of tryouts through the last time-out of Saturday’s championship game.  A message that she had to drive home early in the season when they dropped a few exhibition games and tied their first two games.

“We aren’t last year’s team and that’s ok,” she told the leadership during that time.  “We are just going to be a little different and if we come everyday and work hard and listen to the coaches and listen to us helping them understand how to win games that we would be successful.”

Mission accomplished.  After that “shaky” start, they went on to go 19-0-2 culminating in the Division 1 State Championship against Algonquin this weekend.  The match was a defensive battle that saw Hingham’s senior captain Sophie Reale net the only goal of the game midway through the first half.  Players and Monroe will admit it was not their top performance of the year, but no one will remember that part in 20 years.

“It wasn’t our best game,” acknowledges Monroe. “But that’s what makes true champions that even though it wasn’t our best game, we found a way to win the game.  The first 15 minutes you definitely saw the nerves.  When they took the timeout I talked to the girls and said take a deep breath.  And they all did - deep breath in, deep breath out.  I said let’s just compete.  Compete and do all the little things right we talked about. We knew our game plan. We watched video on Algonquin.  We talked about them.  We did walkthroughs about them because they were a threat.  So we couldn’t take them lightly.”

Whether it was nerves or the fact that they were emotionally and physically taxed after an epic 6-round shootout battle with Bishop Feehan earlier in the week, the girls found a way to win their most important game of their season and careers.  Just as impressive as the wins was how they managed to win their five playoff games.  The first two wins were blowouts.  They had to fight off a feisty Brookline team trying to make a comeback in the round of eight.  The first time they trailed in the tournament was against Feehan and they fought and clawed back for the victory. Then this game where they had to hold onto a one goal lead for three-quarters of the game.  They had to rely on each an every player throughout this championship run to achieve the ultimate prize.

On a team where the offense gets most of the attention, the defense shined in the final two games against the top teams in the state.  Anchored by senior captain Maddie Aughe, the Harborwomen never really allowed Algonquin to get off any quality shots.

“Just staying composed,” Aughe said of her defense. “The defensive line did a really nice job.  Really worked hard.  I know the ball was in our half for quite a while, but we pushed through and just staying composed is really it.”

The back line’s success, while not surprising, might be a little unexpected given their make up this year.  Besides Aughe, junior Reese Pompeo was the only returning starter.  Senior captain Caroline Schiffmann assumed the starting role as center back.  Fellow senior Ella Statdlander was the third goalie on the depth chart last year and sophomore Grace Maroney was moved from offense to defense at the start of the season.  All that being said, they had quite a remarkable season.

“They’re amazing,” said Statdlander after the semi-final game. “Every game.  I’ve had probably one of the easiest seasons I’ve ever had.  Maddie, Caroline, Grace, who’s new to the position this year does an amazing job.  Reese has been solid throughout the year, as she was last year too.  I couldn’t ask for a better defense.  They really make my job easy.”

Their finals loss last year put into perspective the urgency of playing the full 80 minutes, sometimes more, in order to get their desired results.

“Because it was only 1-0 everyone still had to defend as a team, as a whole and think everyone did a great job of that to the end,” Pompeo explained after the game. “But definitely because it was a 1-0 lead, and they could get lucky off a corner or a bounce of a ball, it was definitely more tense with the defense to keep that up.”

As great as the defense was, you can’t win without scoring.  And you can’t talk about Hingham scoring without mentioning Sophie Reale.  The Massachusetts D1 Player of the Year earned that distinction and then some in this tournament.  She had at least one goal in every one of the five games. She scored 12 of Hingham’s 18 goals. An astounding 75%.  Her 39th goal of the season, and the last one of her high school career, ended up being her most important one.

“I usually don’t remember how I score,” Reale laughs after the game. “It’s usually just head down and go.  But I just knew we weren’t going to get many chances in a state championship in a game like this so you just got to finish what you can get.”

Giving her team the early lead was key to the game.

“Very important,” she answered when asked about scoring the first goal. “Especially after last game we knew how it was to get scored on. So I think scoring the first goal is really, really important.  (It was) definitely a sense of confidence especially since our team doesn’t get down a lot in games.  When we do go down a goal it’s kind of like ‘oh crap’ we need to get another goal.”

Opponents who don’t focus on Reale during games do so at their own peril.  It’s usually two or three defenders on her at a time.  This leaves opportunities for her teammates who have stepped up throughout the season given the chance.

“I think my midfield is my biggest supporters on the team,” adds Reale. “They are there always supporting me like hey I know you have a lot of people on your back, but you got us and we are right behind you.”

“We’ve been playing with each other for a while,” Reale says of Murray. “We play on the same club.  So we grew up playing together.  We kind of have similar styles of play and we have close enough bond that we play really well together.”

For 11 seniors, this was their last high school soccer game.  For most it was their last organized game ever.  We will be seeing Reale, Aughe, and senior Emily Gibbons playing next year at the collegiate level at UCLA, Northeastern, and Cornell.  Coach Monroe knows she has big shoes to fill with the loss of these talented players, but is confident in her underclassmen to take the reigns next year.  It’s not only the talent on the field she will miss, but the quality of people that are leaving as well.

“An incredible season with incredible people,” Monroe reflects on her team while standing in an empty HHS parking lot.  “Honestly, as I was thinking in the car following the bus just tearing up like how good they are.  They’re great soccer players, but they’re great kids.  They’re great role models and they deserved it.  We lose a lot of starters and a lot of seniors so it’s definitely going to be a very different team next year as well.  I’m excited because we had a lot of younger kids on the team this year because they needed to learn, they needed to develop and they needed to be in the environment even if they didn’t get to play a lot.  They’re so important and crucial to the program and to the future of the program it’s nice that we got a head start and some of those players are going to have to fill some really big shoes.”

It was quite a season for the first year coach and her resilient team.  They didn’t do it on their own and thanked quite a few people during their end of the season banquet yesterday, including the athletic administration, the boosters, the parents, and of course, the Red Army.  As Monroe’s predecessor, and wife, Sarah Dacey explained at yesterday’s banquet, “Mary-Frances was the right person at the right time for this team to achieve this title.”

And as Monroe will tell you, “I now have bragging rights at home!”