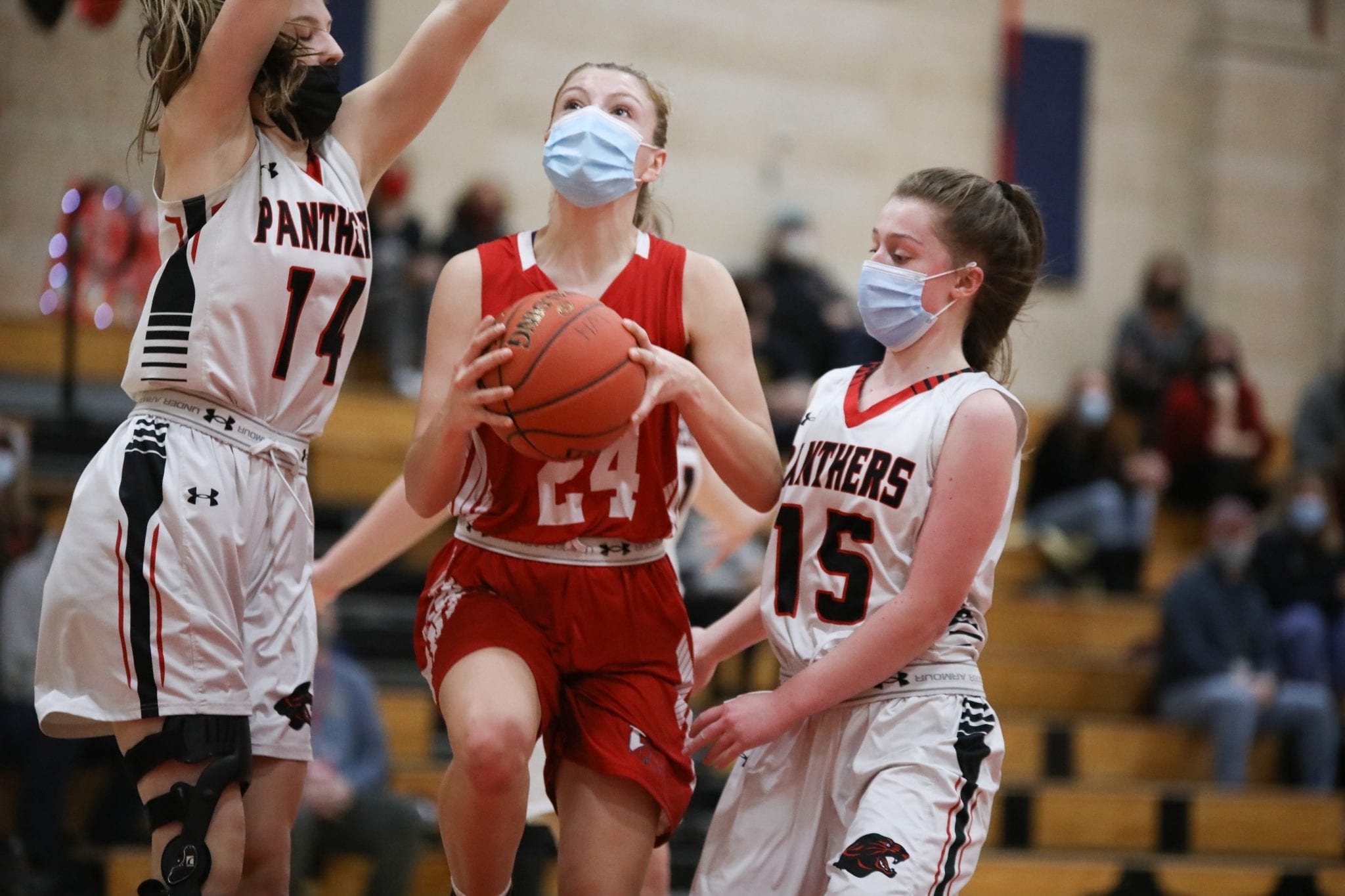 Junior captain Perry Blasetti driving to the basket in Hingham's loss against Whitman-Hanson.

Last night’s game versus Whitman-Hanson in the third round of the Patriot Cup playoffs was a perfect microcosm of the girls basketball season.  There were ups and downs, a bit choppy, not pretty at times, periods of great basketball, and a never-give-up attitude by the whole team until the final buzzer.

To say it wasn’t the girls night wouldn’t be a fair statement.  They played outstanding defense, had the lead multiple times and made it uncomfortable for the Lady Panthers the whole game.  Unfortunately, the Harborwomen struggled a bit, or a lot, on offense, especially at the free throw line, missing nine foul shots on the night.

The game started off with senior captain Abbey Foley scoring the first five points of the game, almost exactly how Monday’s game vs Silver Lake started.  Whitman-Hanson, unlike SL, came right back and tied up, which was the theme of the night.  It was like that throughout the low scoring first half.  Hingham got their chances inside, getting to the line nine times in the half.  The Lady Panthers struggled from beyond the arc, where they have been dangerous all year.  In the last game between these two teams, WH made 10 3-pointers.  Last night, they made only half of that.  The Harborwomen only trailed by one at halftime, 21-20.

Hingham’s offense picked up at the beginning of the third quarter. They took the lead, 25-2, after junior captain Perry Blasetti nailed a three.  The Lady Panther’s came storming back with an 11-0 run.  While their defense kept them in the game, the Harborwomen’s offense just couldn’t manage to break through.  The closest they got was cutting the Lady Panther’s lead to one.  Whitman-Hanson’s defense was great too.  Hingham got no easy looks, particularly in the second half.  Even with Blasetti’s long three with 1.4 seconds left, Hingham fell short 42-37 ending their season.

“Our offense struggled,” Head Coach Eugene Buczynski said after the game. “Trying to get good looks and actually in the beginning of that run, we had good looks and the ball was going in and then we started getting tight, and the ball wasn’t going in and we were looking for an answer. Those runs are tough. I think both teams were saying whoever gets the biggest run is going to win the game. And I felt like we were in position to make that run. Defensively we were up, we're in good spots. It just didn't come together for us. And it came together for them.”

Reflecting on the season as a whole, Coach Buczynski talked about how no one knew if there was even going to be a season, let alone playoffs.

“Obviously it didn't turn out the way we wanted it to,” he went on to say. “But we were just saying it as a group, in the beginning of the year to think about where we were, where our minds were, wondering what our future was going to look like.  And then we got to spend two months going to the gym together every day and doing something that we enjoy to do and, and being good friends to each other and good teammates. And that is what we really have to look at.”

When asked what he thought the difference was between last year and this year’s season, he pointed out the singular focus on the league play, rather than some big out of conference match-ups they usually face in other seasons.

“The first like four games, you're just kinda like, just glad that everyone was together. But then it was like after four games, it was normal,” Buczynski reflected. “You're going to the gym every day. You're starting to think about the same things. You don't have to think about the Norwoods and the Foxboroughs this year, but you still have to worry about your league. And our league is top-notch, you know, so going through the season in the league, it’s just as much preparation. But I think spending time with the girls and letting practice be a little bit looser and more communication”

He also points out the given the current schooling situation with the kids, practice might be the only in-person contact they get for the day.  He explains that “because you don't know how much exposure to other people they've had up until the point when they made it to practice, it could be that you could be the first person they talk to in-person all day, at four o'clock in the afternoon. It changes your perspective.”

While Buczynski has a young team and sees a bright future next season, he does take time to point out the lone senior on his team, who played her final game last night.

“I definitely feel for Abbey (Foley),” he says. “We had good captains, but the leadership kind of falls on seniors, right? Kids look for them. Abbey's a strong individual, strong leader, and she's able to do that. But it is a lot of pressure when you're on your own, but the friendships that she has with (co-captains) Perry (Blasetti) and Caroline (Connolly), I think definitely helped her through the year.” 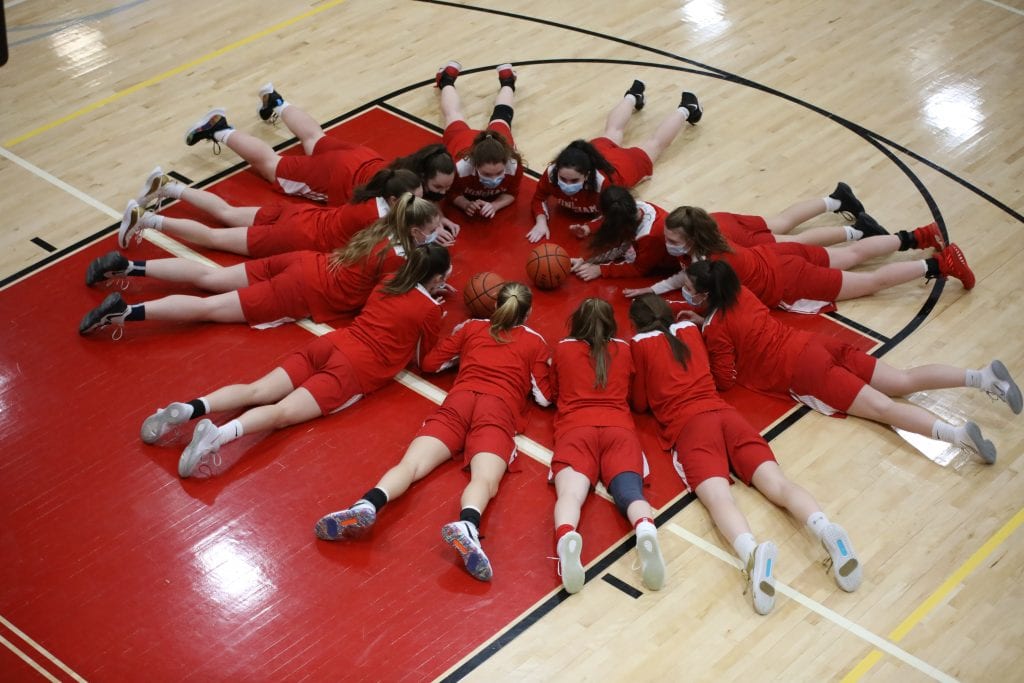 The team circles together on the floor before every game. 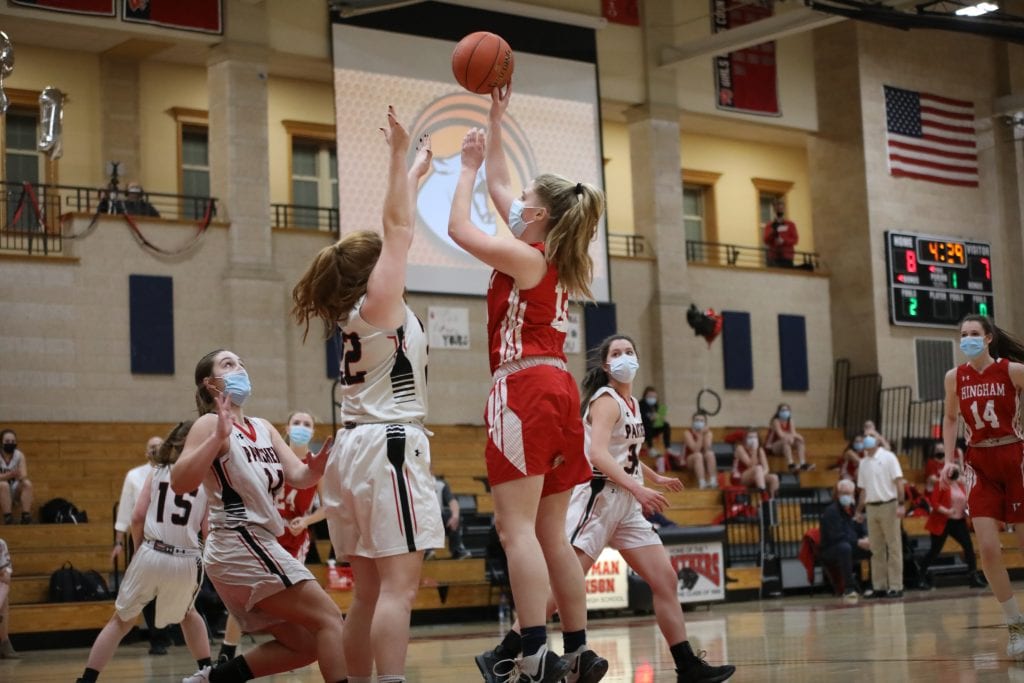 Junior Colleen Johnston pulls up for a jumper in the first quarter. 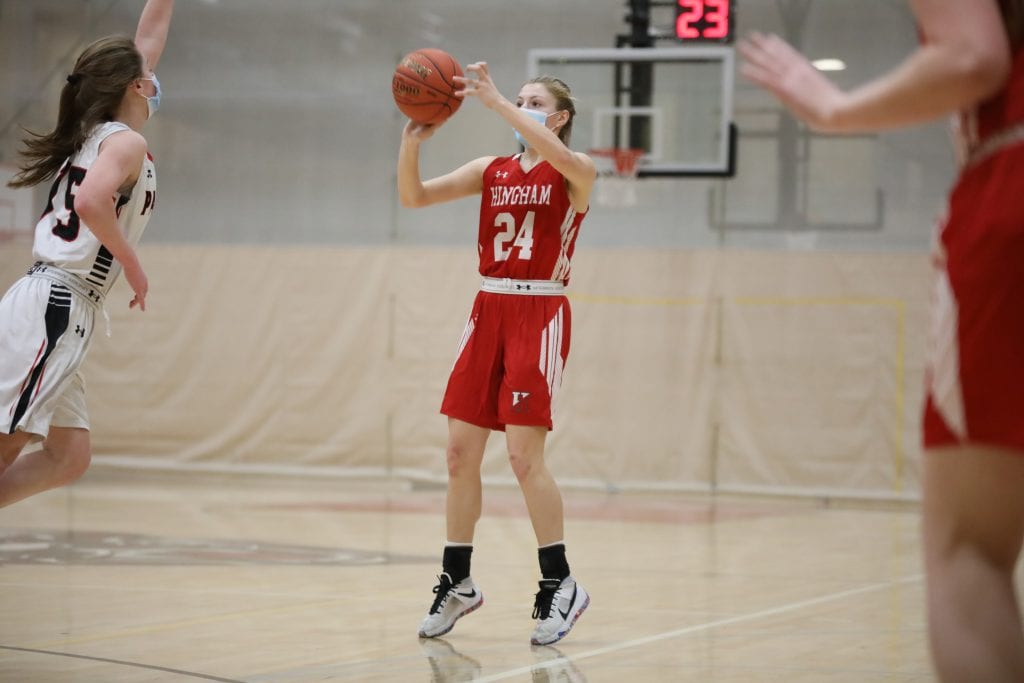 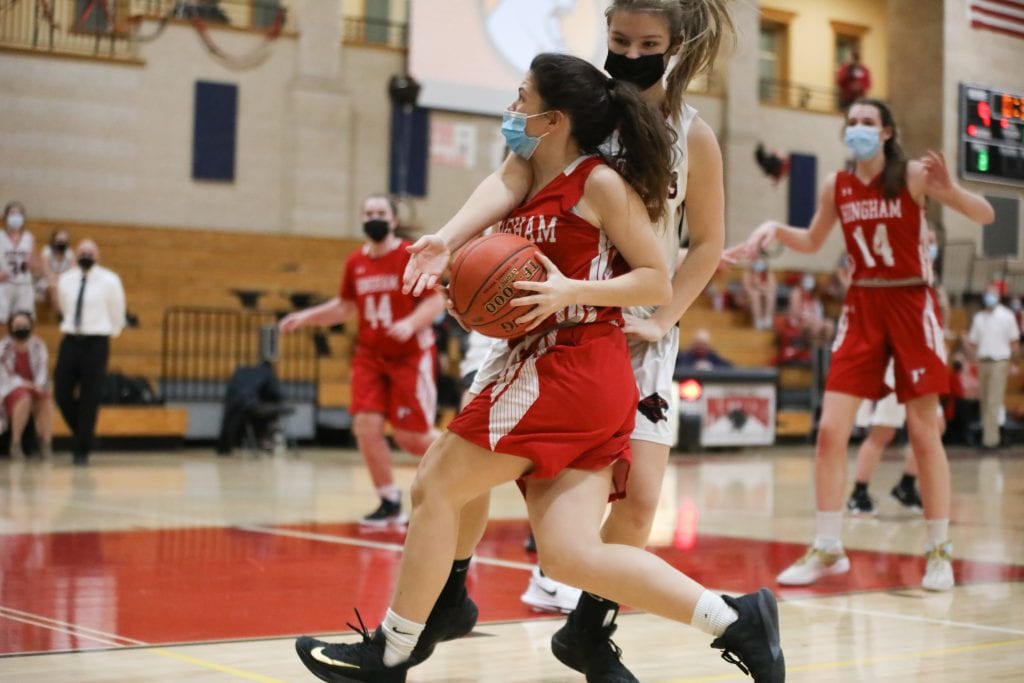 Sophomore Ellie Savitscus gets fouled on her drive to the basket. 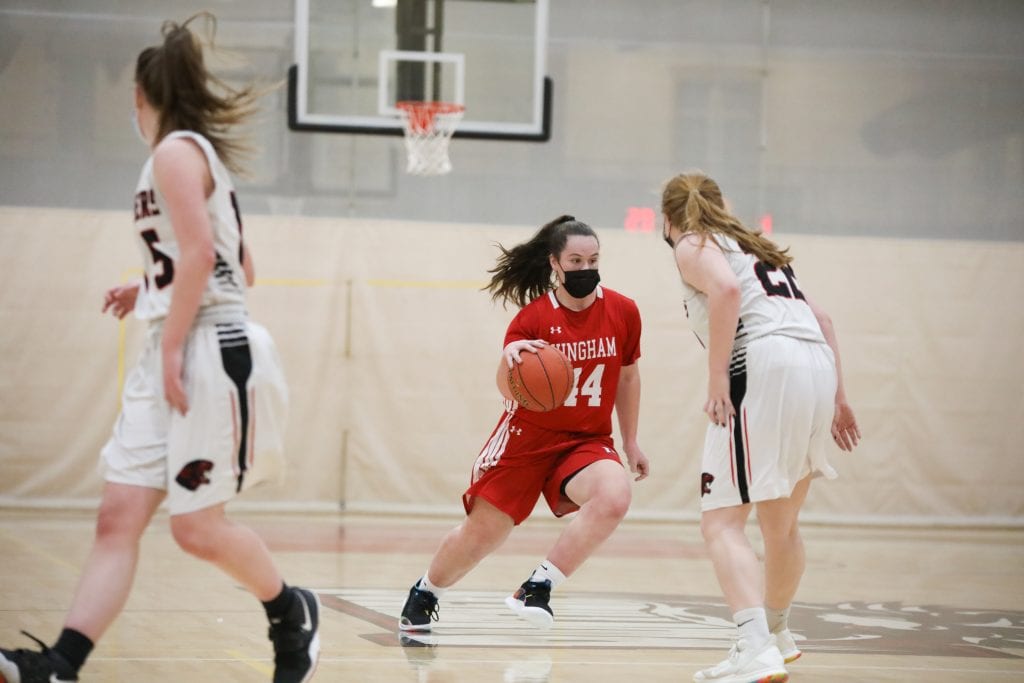 Sophomore Sarah Holler brings the ball up the court. 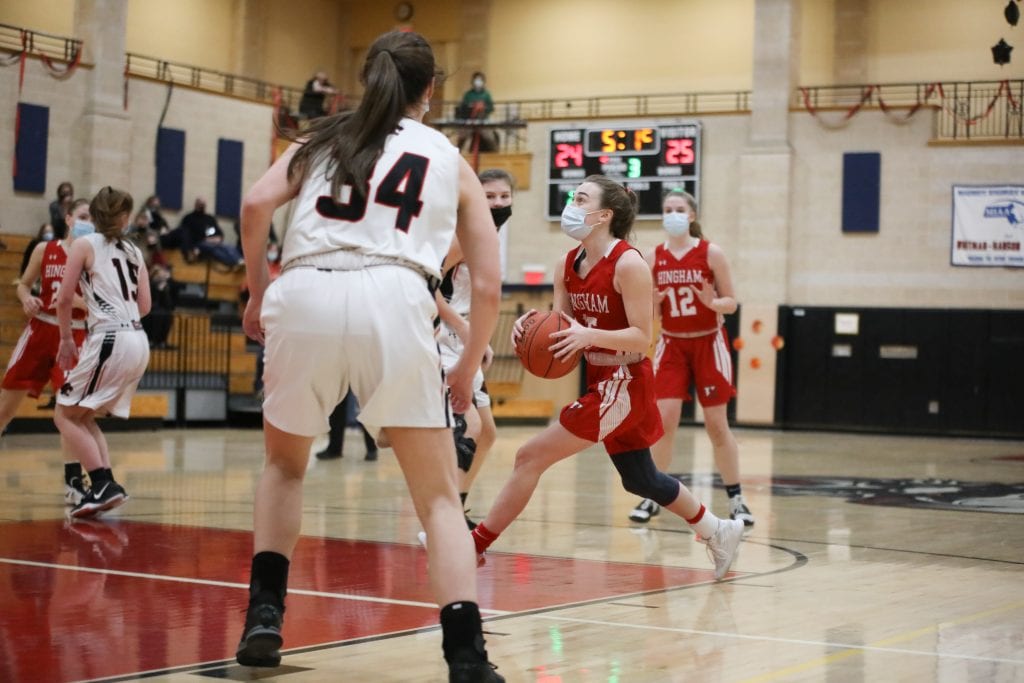 Sophomore Colette Hanney had a big three late in the game. 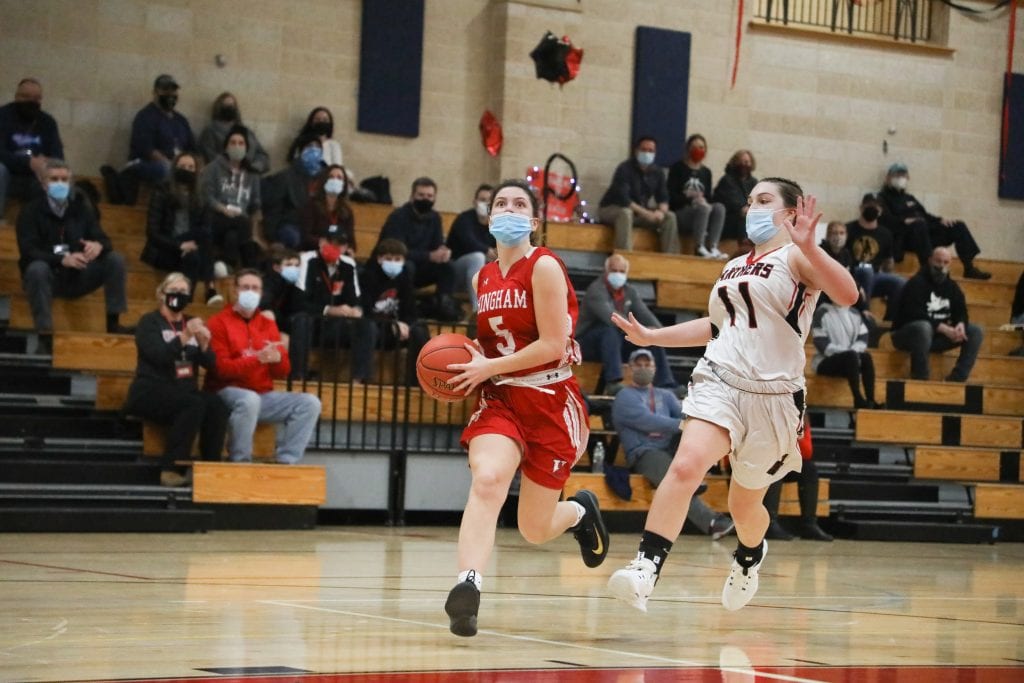 Sophomore Ellie Savitscus goes for the lay-up after stealing the ball.