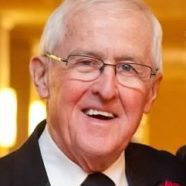 Edward “Ed” Thomas Muldoon, Esq., of Hingham, left his loved ones on July 5, 2021, surrounded in prayer by his family and friends.  Husband of 50 years to his beloved, the late Carol Ann (Tarzia) Muldoon, Father of Thomas E., Esq., and his wife, Christine (Cossari), of Ridgefield, CT, Michael J. Muldoon and his wife, Amy (Kippenhan), of Braintree, and Amy A. Muldoon-Metcalfe and her husband, Christopher, of Hingham. “Papa” to Madelyn, Zachary, Braelyn, Ryan, Patrick, and Molly.

Son of the late John P., Sr. and Catherine (Rutledge) Muldoon.  The youngest of five, his siblings went before him, brothers Gerald, Paul, John “Jack” Jr., Muldoon and his sister Janet Barry.  “Uncle Eddie” was well loved by many nieces, nephews, great and grand alike and would share stories with the younger generations with his surviving sister-in-law, Marge Muldoon.

Ed grew up on Bushnell Street in the Ashmont section of Dorchester, in St. Gregory’s Parish and played the clarinet in St. William’s Band. He attended Boston Technical High School, class of 1955 and after high school worked at Boston Gas and UPS before deciding to follow in his father’s and brother’s footsteps to become an attorney, attending Suffolk University, continuing onto Suffolk Law School, class of 1964.  A partner in the law firm of Buckley, Haight, and Muldoon, with its offices in Dorchester, and later in East Milton Square, he practiced law for over 50 years and was still a member of the bar at his passing.  His law career began in the Massachusetts Defenders’ Committee where he met the love of his life Carol, who he married and made a home with in Hingham.

He was an avid golfer his entire life, loving all golf courses but especially playing in the Hatherly Tournaments in Scituate with his nephew Mark Cirone and later in the Senior League at Widow’s Walk as well as crossing off a bucket list item playing in Ireland. Even a few weeks ago he still found time to break out his putter and sink some putts on the putting green. With his keen sense of location, Ed could send you anywhere in Massachusetts based on the proximity to a courthouse or golf course. Raising his children, you would often see him on the fields coaching Little League, Soccer, and Hingham GALs basketball and softball.  In the years where they would be short a coach, they could always reach out to Ed, so all the kids could play. Over the years he was an active member of St. Paul’s School, where his three children attended and St. Paul’s Church, as well as on the Archbishop Williams Parent Board.  He was a volunteer with his wife, delivering Meals on Wheels, enjoyed traveling, and had wonderful trips to Europe, The Islands, and across the United States with Carol, family and their close friends Ellie and Buzz Drew.  Many summers were spent on Cape Cod and winters skiing in New Hampshire with his family.  Ed also loved his scratch tickets and was always looking for the big win.  And when March came around, he was ready for the madness with his Muldoon nephews.

Ed left this life in the manner he lived it, with courage, gratitude, dignity, and above all, his faith in God.

Relatives and friends are respectfully invited to greet the family during the visiting hours on Monday 4-8 PM in the Pyne Keohane Funeral Home, 21 Emerald St. (off Central St.), HINGHAM. A Celebration of Life Service will be held in the funeral home at 9:45 AM on Tuesday prior to the Funeral Mass in St. Paul’s Church, Hingham at 10:30 AM. Burial in St. Paul’s Cemetery, Hingham.  Due to Carol’s passing during COVID, a celebration of both Ed’s and Carol’s lives will be held immediately after at South Shore Country Club.

In lieu of flowers, expressions of sympathy may be made in Ed’s memory to St. Paul Parish,