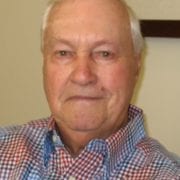 Edward is survived by his wife Arlene, their eight children, nineteen grandchildren, and fifteen great-grandchildren. He was born on January 24, 1926 in Belmont, Massachusetts to Angie (McGuigan) Johnson and Edward P. Johnson. Edward graduated Belmont High School in 1943 and enlisted in the Navy, where he proudly served during WWII until 1946. He graduated Holy Cross College with a Bachelor’s degree in Engineering; while studying, he excelled in football and his favorite sport, hockey, lettering in both. His success in hockey advanced him to the feeder team for the US Olympics. He and his wife raised their family in Lexington, MA, where he enjoyed golf and club hockey. He joined L.C. Anderson HVAC as an apprentice and later became a partner in the business. After leaving Lexington, he and his second wife, Arlene, built a home in Falmouth, MA, where they resided until 2008, when they retired to Linden Ponds.

A Funeral Mass will be held at Church of Resurrection in Hingham, MA at 10:30 am on Tuesday, July 7th and a family Graveside Service will take place immediately after at Oak Grove Cemetery in Falmouth, MA. In lieu of flowers, donations are gladly accepted to www.foldsofhonor.org in Edward’s name.