Charlie Inglefield, co-author of The Boy Who Drew Auschwitz, recently relocated to Hingham.

About The Boy Who Drew Auschwitz

The Boy Who Drew Auschwitz, which was released in the United States in July of 2021, tells the true story of thirteen-year-old Thomas Geve who was imprisoned in Auschwitz, Buchenwald, and Gross-Rosen during the Holocaust.

Prior to his imprisonment, Thomas and his mother had escaped and evaded Berlin's Gestapo and its’ informers for four years. In June of 1943, thirteen-year-old Thomas and his mother were deported to Auschwitz-Birkeanu, where they were separated upon arrival, leaving Thomas to fend for himself in the men’s camp of Auschwitz.

He would spend 22 harsh months in three different concentration and death camps, nonetheless never losing his will to live — and despite the evil of the camps, Thomas’s account provides “a striking affirmation of life.”

At age fifteen, Thomas was liberated from Buchenwald; however, he was too weak to leave the camp, and spent the weeks that followed documenting his experience through a series of 80 drawings, 56 of which appear in the book, depicting the day-to-day of life in the concentration camps.

In the years following the war, Thomas wrote a memoir further detailing his experience, doing so in honor of his lost friends and the millions of silenced victims lost to the Holocaust: “We felt an urge to document what we had witnessed. If we who had experienced it, I reasoned, did not reveal the bitter truth, people simply would not believe the extent of the Nazis’ evil. I wanted to share our life, the events, and our struggle to survive.”

Co-author Inglefield acknowledges, “The education element of the book is the most important driver for Thomas and his family; his objective since becoming an official witness to the Holocaust over 30 years ago is to educate future generations through his experiences with his story and his drawings. [Today,] Thomas is in his ninety-third year and still talks to audiences from around the world who come to the Yad Vashem Museum in Jerusalem.”

The Boy Who Drew Auschwitz is being published in ten countries over the next year.

Co-author Charlie Inglefield first became familiar with Thomas Geve’s tale in March of 2019, when a friend of his told him about an exhibition called The Children of Buchenwald that was taking place at Burg Museum in Zug.

“Zug is a small expat town near Zurich where we lived,” Inglefield explains. “I didn't even know that Zug had a museum! [It was] in the leaflet [advertising the exhibit where] I first saw the name of Thomas Geve and [heard] the story [about] how Thomas, along with a group of boys and girls, were sent from Buchenwald during the summer of 1945 – Buchenwald was liberated in April 1945 – to the beautiful alpine hills of Zug to recuperate and start the long road to recovery.”

After a quick Google search, Inglefield discovered Thomas’ drawings; from there, he got in touch with Thomas’ daughter Yifat through Thomas’ website. “We get on well and I learnt more about Thomas,” the writer recalls. “I was fascinated by Thomas’ life – not just during the horrors of the Holocaust and growing up in Nazi Germany, but also his life afterwards, moving to Israel.”

That summer, Inglefield flew to Tel Aviv, Israel, where he would spent a week interviewing Thomas. “It accelerated from there,” the writer recalls. “I met a friend of mine in London who was part of the non-fiction team in HarperCollins, [the] second largest publisher in the world: we got the book approved and we started writing in January 2020.”

So, what was the co-authorship experience like? “It was challenging – as I expected it to be,” Charlie admits candidly. Inglefield navigated the complexities of cross-continental co-authoring during the COVID-19 pandemic; as a result, he was “only allowed me to go to Israel once, so [he and Thomas] were liaising between Switzerland and Tel Aviv.”

He continues, “My role was to bring Thomas' story to today's audiences. The Boy Who Drew Auschwitz is the third updated edition of his testimony; it follows on from his first book, Youth in Chains, in 1958 and Guns & Barbed Wire in 1987. So, I was fortunate that I had 70,000 words already written by Thomas.”

The co-author of The Boy Who Drew Auschwitz reflects that his greatest challenge was ensuring that today's reader had a book that was relatively easy to follow. To do so, Inglefield says, “We added new content from the interview: photographs, footnotes, more chapters, et cetera. We had changes in direction, which were to be expected: Thomas led such an extraordinary first 15 years of his life – there was so much detail, so much that happened to him.” 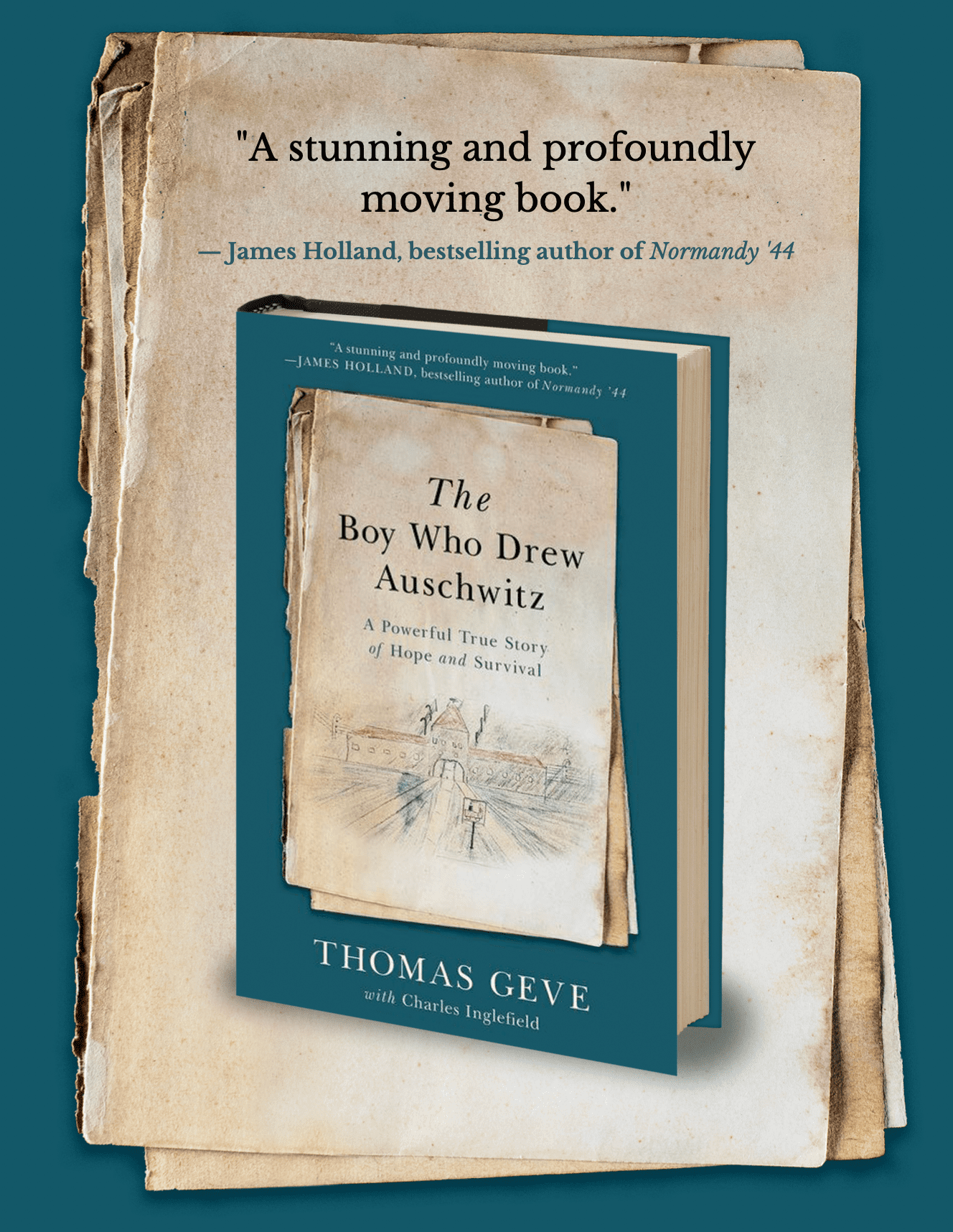 Throughout the process, he not only worked closely with Thomas, but with Thomas’ daughter Yifat; Inglefield says that they developed a great relationship, which proved to be essential in the drafting process, as Thomas was unable to venture out too much because of the ongoing pandemic. “We were honest with each other, we changed direction a number of times. There was give and take, as you would expect – but all to make sure that the book was where it needed to be.”

Inglefield identities one of Thomas’ focal points in crafting his narrative was “the positive aspects of his experiences – the importance of friendship, loyalty, kindness – all in the most horrendous of environments. [Thomas] does not ignore the horrors of the Holocaust, but he does talk about how they lived, how they survived, and how they kept together in unimaginable conditions."

And how has public reception been since the book’s release? “Very positive, I’m relieved to say. We have ten country launches that started in 2021 and will continue through 2022-2023. I am not one who actively looks for reviews – I can't bring myself to do that! – but I am reliably informed that we hover around the 4.8 mark on Amazon.”

Inglefield reflects, “It was such a privilege to play a small part in bringing Thomas' story and drawings to today's audiences. It was, and still is, a big honor.” Additionally, this was the first time he authored a book: “Normally I write one- to two-thousand word articles about a rugby match!”

Inglefield offers these two pieces of advice for aspiring writers: “First, don't let anyone tell you that you cannot follow a dream (if that is writing). There are a lot of doomsayers out there saying that the market is congested and you need this and that. Rubbish – go for it.”

Secondly, he says, it’s important to develop and nurture your network. “If you meet or are recommended to get in touch with editors, journalists, or anyone who might be a useful contact, make sure you do it – it is amazing how contacts from the past can come to your aid years down the line.”

Prior to co-authoring Geve’s memoir, Inglefield worked as a freelance journalist for over fifteen years, specializing in sports and travel writing for African, Australian, UK, and New Zealand publications. He spent the previous two decades in business developing, consulting, and business development and partnerships within the business intelligent, medical communications, and recruitment industries.

The London native was born-and-raised in the UK. Inglefield moved to Sydney, Australia in 2006. From there, he headed to Geneva, Switzerland in 2011, where the writer would reside for a decade before relocating to Hingham in 2021 with his wife and two children, Molly and Max, ages nine and seven, respectively.

“After ten years in Switzerland, we wanted a change, and Boston was a great opportunity to do that.” Inglefield says. “My wife works in rare diseases and was offered a job in [the] Seaport, so we moved with her job.”

When asked whether they have any favorite spots around town they frequent, Inglefield replies, “Like most Brits, we like a beer or two, so The Snug has been a good watering hole and the likes of Back Bay in Boston! Tosca is nice and Red Eye Roasters makes a good coffee.”

When he’s not writing or working, Inglefield enjoys dining out, enjoying his new surroundings, exploring, and spending time with his family. Additionally, the sports journalist fosters a love of most sports, writing mainly about cricket and rugby; he also cites travelling and travel photography as hobbies of his – prior to children and COVID.

Inglefield continues to keep busy: earlier this week, Inglefield had a successful book signing in Barnes & Noble in the Derby Street Shoppes and he hopes another one will follow.

He’s also actively working on a documentary about the final voices of the Far East Prisoners of War who worked on the Death Railway (the Thai-Burma Railway) in the Pacific: “My grandfather was a prisoner of war of the Japanese between 1942 to 1945.”

“There are so few left alive around the world, their voices – like Thomas’ – are crucial for future generations to learn about these infamous events that took place in World War II.” He then recalls “two fascinating days in February [spent] interviewing a wonderful chap in the UK called Bert Warne, who is in his one hundred and third year and is as fit as ever!”

At the end of our interview, Inglefield laments the importance of learning the valuable lessons from people like Thomas “before it is too late,” saying, “It doesn't matter what generation you come from – once the likes of Thomas leave us, you lose that human connection to one of the most notorious events in modern day history.”

The Boy Who Drew Auschwitz is available from online retailer Amazon.