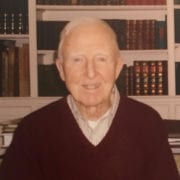 Charles Yardley Chittick Jr. died on July 13th, 2020, his 93rd birthday, in Hingham, Massachusetts, in the presence of his family. Charles, known as "Charlie" or "Cy," was a lifelong patriot and an active parishioner of the New North Church. His morals, humility, and gentlemanly manner steadied him to navigate nearly a century with poise.
Born in Newark, New Jersey in 1927, he was raised in Waban, Massachusetts. He attended Phillips Academy, Andover where he was an awarded runner. Following his graduation in May 1945, Charles enrolled in the Coast Guard Academy, in New London, CT, where he sailed on the tall-ship Eagle; by his graduation in 1949, with the outbreak of the Korean War, Charles joined the Navy with little hesitation. A fighter pilot in the Navy’s Task Force '77, he served aboard aircraft carrier USS Lake Champlain.

After his duties were fulfilled, Charles sailed home with the primary intention of raising a family. To that end, he married Marian Ellen Sedgwick, a dietician at the Massachusetts General Hospital, in 1952. They moved to Hingham and settled in a beautiful colonial home on South Street, a home they passionately restored and treasured for 61 years.

While in the Navy Reserves, Charles attended MIT, earning advanced degrees in engineering and business. He parlayed this study into a lifelong career at Arthur D. Little, Inc, where from 1958 to 1983, he consulted on a wide variety of aviation engineering projects. His only hiatus was to pursue a project to revive steam energy transportation, evocative of his ambitious and inventive spirit.

An attentive husband, father, and grandfather, Charles invested his time and talent generously in his family. His love and affection were unconditional, as was his delight for an excellent home-cooked meal. There was no limit to his reverence for Marian’s cuisine, which he would richly appoint with wine from their extensive travels in France. Among his other interests were basset hounds, antique furniture, woodworking, classical music, humor, the life and works of Winston Churchill, and fishing on Nantucket’s shore. Chief among Charles’ great quirks were his hearing aids, made necessary by hours spent flying his Banshee fighter jet; shouting to be heard by ‘Grampa’ would have grown tedious, were it not that everyone was so eager to converse with his noble soul. He will be missed by many.

A service will be held in his memory on Saturday, September 26th at 11:00am at the New North Church, located at 1 Lincoln Street in Hingham.

In lieu of flowers, donations can be made to Caring for a Cure at Mass General Hospital, located at 55 Fruit Street in Boston, MA, 02114, or to the New North Church.

Friends may offer their support by sharing a special memory or message here.