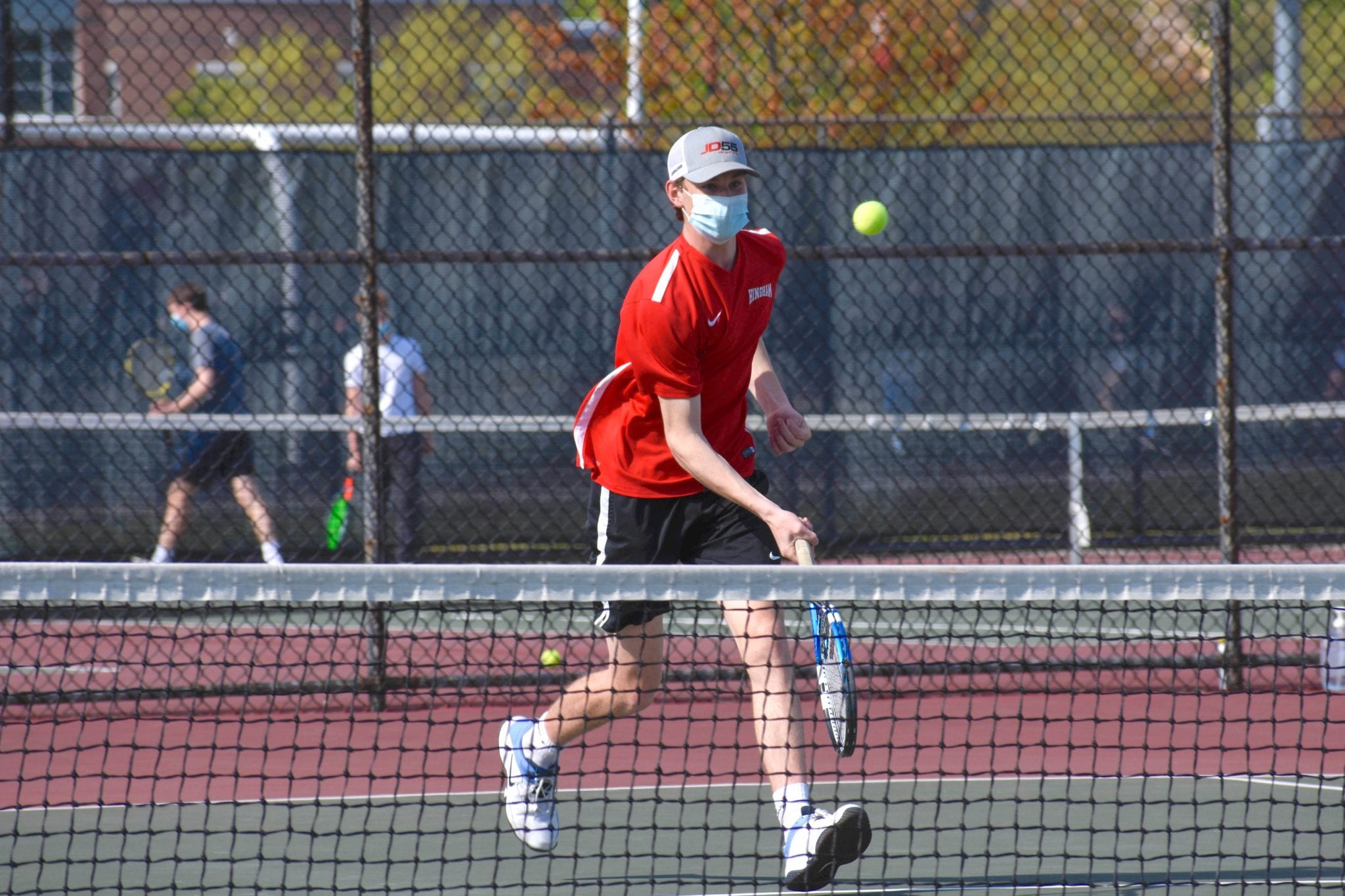 Sophomore Charlie Even meets a volley at the net. (Photo credit: Jake Bednarski)

On a busy Hingham High campus, the boys' tennis team squared off against Whitman Hanson. Hingham decided to play their third lineup against the visiting team and still managed to win all five matches.

High school tennis matches feature five matches: three singles and two doubles matches. One team needs to win three of the five to secure the victory, with each match of equal value. Hingham won every single contest, and all but one in 2 sets.

Hingham played Trevor Buckeridge and Thatcher Grey in one of the doubles matches. Sophomore Buckeridge and Junior Gray were strong partners but started slowly. They won the first set 6-4 but picked up the pace in the second set. Gray’s volley skills and Buckeridge’s baseline plays were on full display in several points in their 6-1 win to seal the match.

Liam Arnold and Riley Thomson took the court against Whitman Hanson's brother-duo Cameron and Zach Lindsay. Despite the young age of the freshman, the two played a strong game against the brothers, winning 6-1 the first set and 6-2 the second set. Captain Ian Strehle had much to say about the makeup of his team, "we have a very young team," commented Strehle, "lots of future success."

The three singles matches were also mostly smooth sailing for the Harbormen. Will Baker took on Aidan Hickey in a tough matchup. Despite Hickey’s tough serves, sophomore Baker remained confident in his strong baseline game and won the sets 6-2, 6-1. Charlie Even quickly bested Will Mulligan in their match. In the fastest game on the court, sophomore Even won 6-1, 6-0 in a dominant display.

Brendan Richardson’s matchup was the most nail-biting for the watching team members. In the longest match, Richardson fell early, going 4-6 in the first set. Although the team knew by the end of the second set that they had secured the victory, the captains gathered the court to cheer on their teammate. This seemed to rally the junior, who won the next set 6-4. He ended up winning the tiebreaker 10-5, sweeping the matchup 5-0 for the Harbormen.

Senior Strehle expanded on what the team has to work on in these upcoming days before their next matchup. “We need to work on dexterity and confidence,” he announced, although he did mention that, “we’re resilient, but our weakness is that we care too much.” The team plays Plymouth North on Friday after their loss to Duxbury on Wednesday. Click here for more information about the Hingham boys' tennis team.