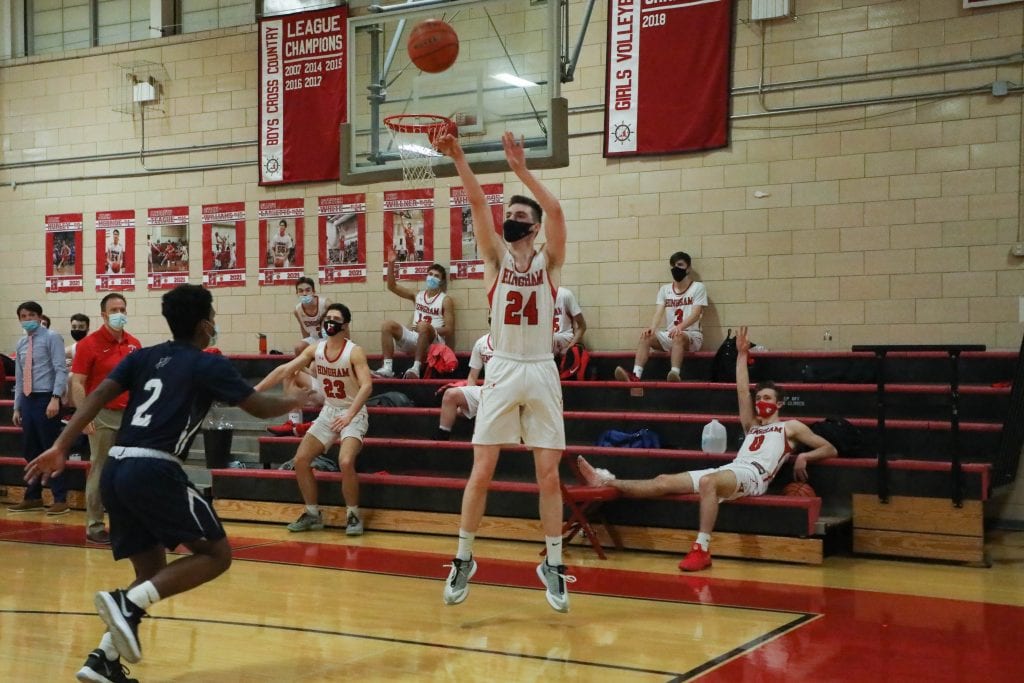 The boys not only played their first home game last night, they also celebrated Senior Night in what continues to be fluid season for high school athletes this year.  After playing their first 3 games on the road, the Harbormen finally got to play in their building as they took on Plymouth North for the second time in 10 days.  Hingham was looking to get to .500 for the season with a win against the team they lost to by 3 points last week.

The Harbormen were much more aggressive from the start.  Senior captain Steven White hit two 3-pointers in the first quarter, while Jack Hurley, the other senior captain, was chasing down loose balls and looking for the open shooters.  Hingham took a 13-7 lead into the second quarter.  Junior Curtis Murphy continued the good shooting in the second making two 3-pointers, which extended the Harbormen's lead to 25-17 at halftime.

The second half started with two quick Hingham baskets and an early timeout by the Eagles.  It also saw Hurley leave the game with an ankle injury.  Plymouth North tightened up their defense and started clawing their way back into the game.  Senior Andrew Teague had a big third quarter scoring 7 of his 8 points and helping Hingham build their lead back up to 12 by the end of the quarter.  The Eagles started to make a push again in the fourth before White closed the door on any chances of PN coming back by hitting three huge 3-pointers on consecutive shots.

"We've been in situations before where we've been up and we knew we had to make the most of these last couple of quarters, especially on senior night," says White. "We were just trying to find the open people, we trusted each other, and that's really what it came down to."

The Harbormen came away with the 58-38 win.  It was a team effort that saw 8 players scoring in the victory.  Head Coach Bob Kniffen liked what he saw given last week's results and an injury to one of his star players.

"We were certainly up and down to a team that beat us about a week ago," Kniffen says. "They had some issues and they were banged up a little tonight so both teams were dealing with their own stuff. When we play team basketball and we play together and unselfish basketball, we can get on a run and that's what we did at the end."

Kniffen also talked about the senior leadership of White on Senior Night, espcially in the 4th quarter.

"That's a product of us moving the ball, getting touches on offense,  and it frees him (White) up," he explains. "He's done it for us for three years now, a three-year varsity player, and he certainly came through for us in the 4th quarter.

"One of the priorities of the season is senior night," adds Kniffen. "That's probably number one on the list. To have the opportunity to recognize them tonight was important.  We usually do it at the end (of the season) but had a chance to do it tonight, the first home game."

"It was finally nice to see some familiar faces in the crowd," White added about the celebration last night. 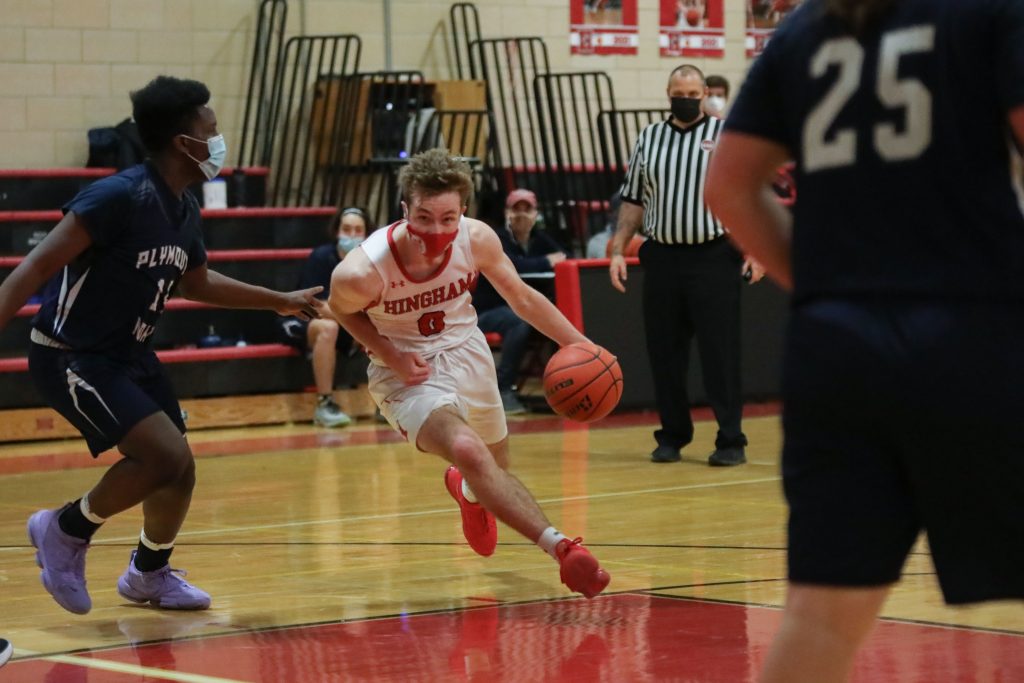 Senior captain Jack Hurley drives to the basket before dishing off to a teammate. 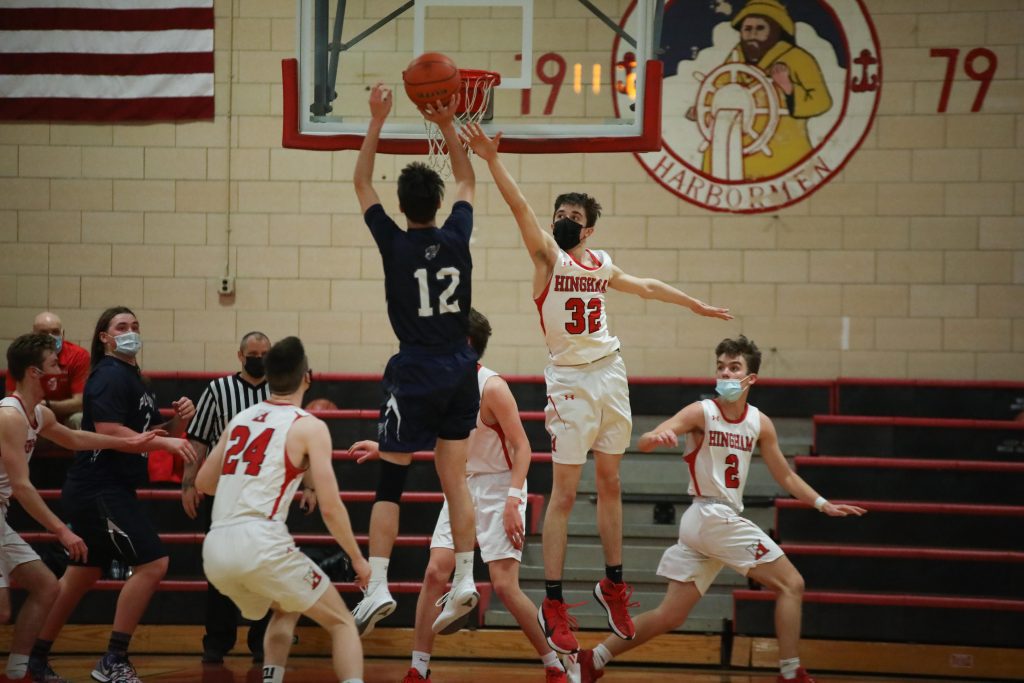 Sophomore Liam McBride extends to try and block a shot. 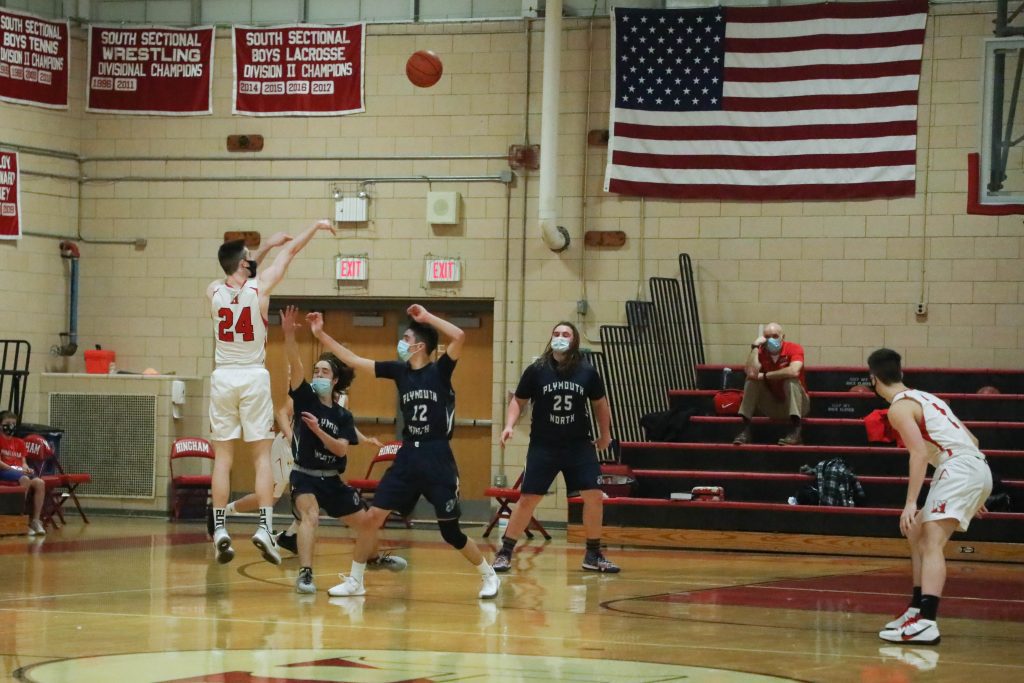 Senior captain Steven White pulls up for one of his two first quarter 3-pointers. 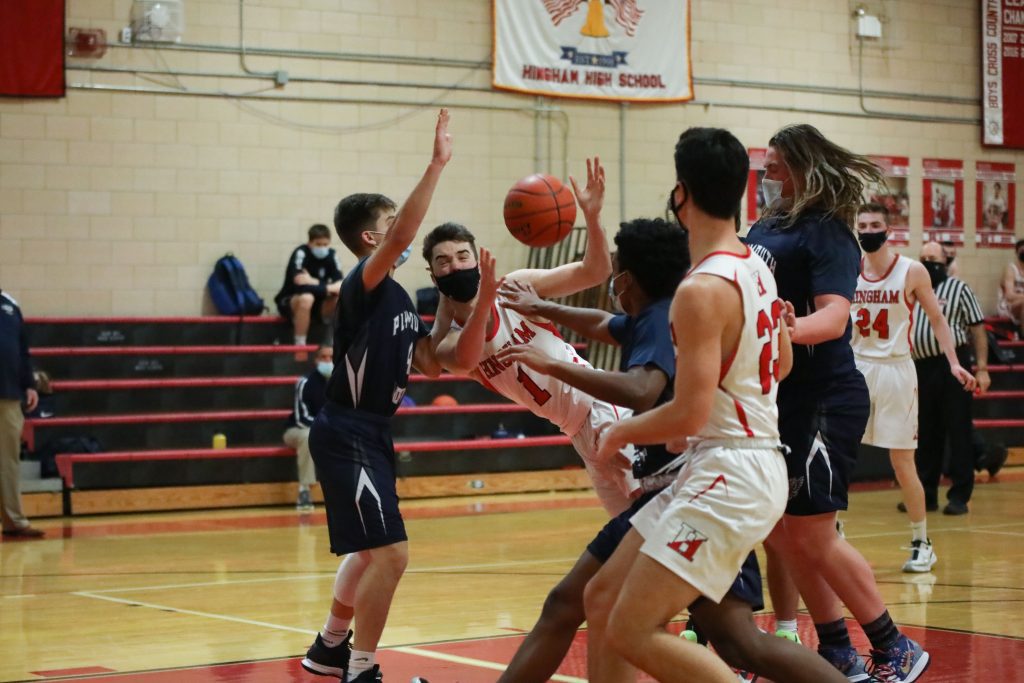 Senior Jack McBride gets fouled driving to the basket. 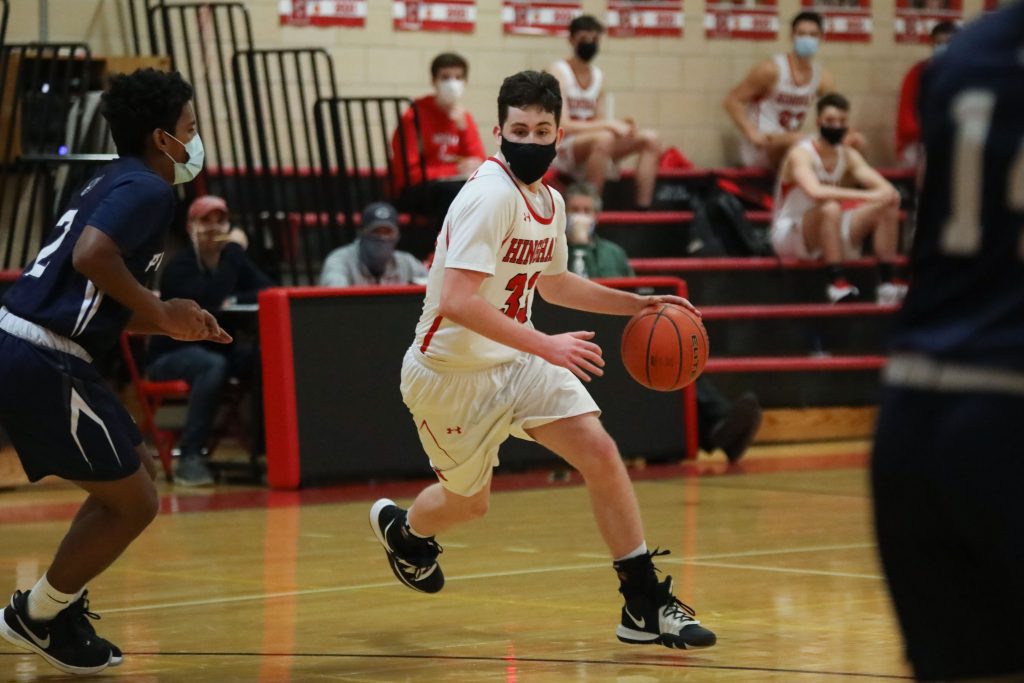 Senior Nik Willner looking for an opening under the basket. 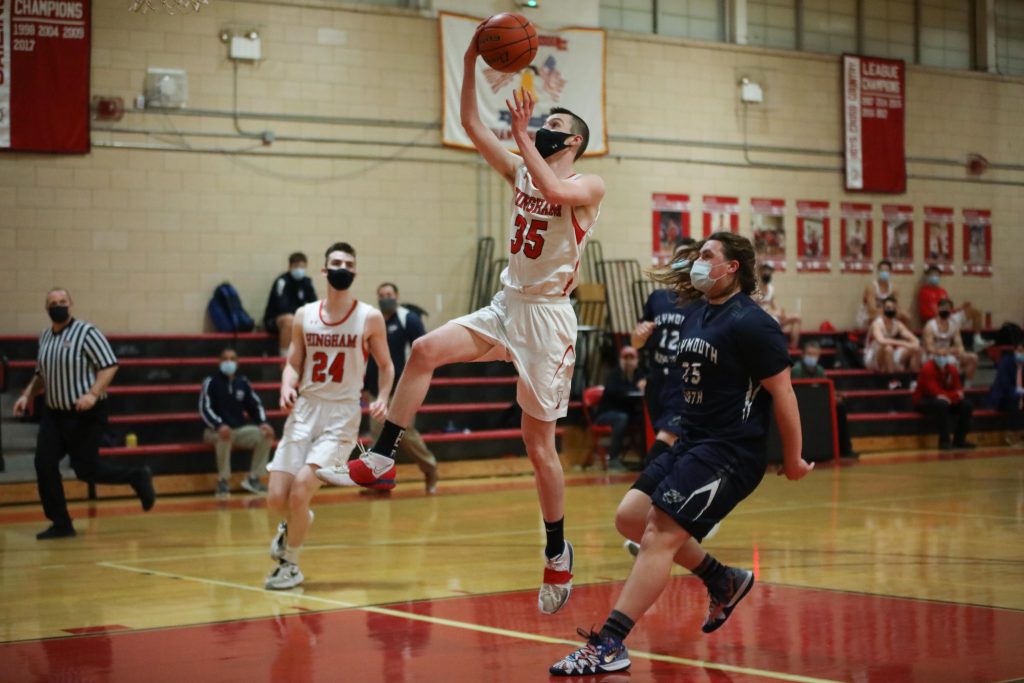 Senior Connor White lays it in during the first half. 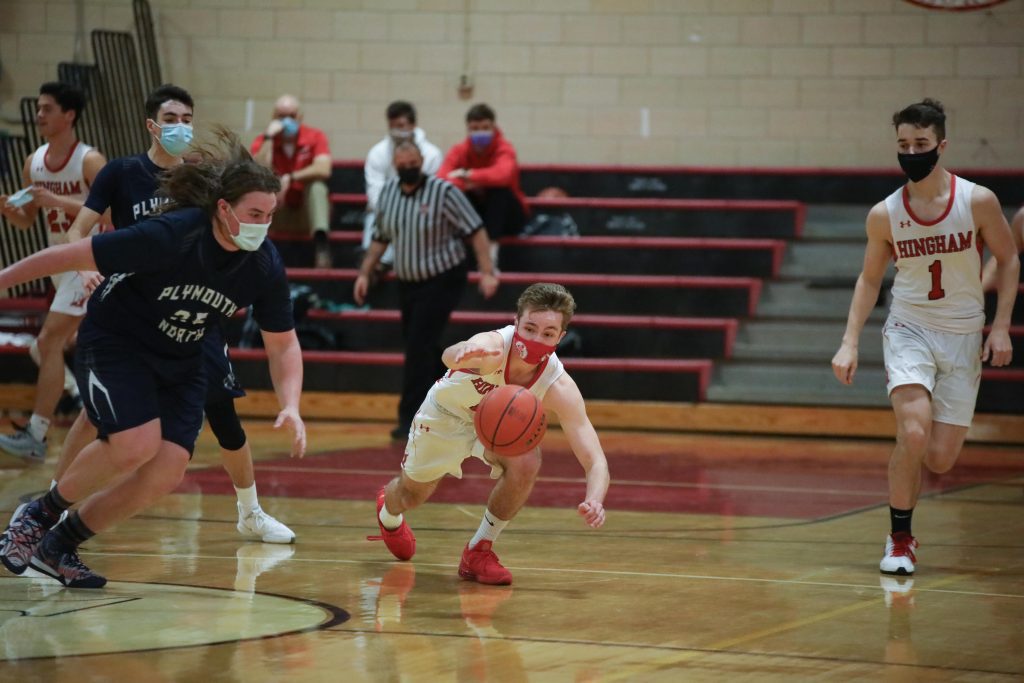 Senior captain Jack Hurley lays out for a loose ball before leaving the game with an injury. 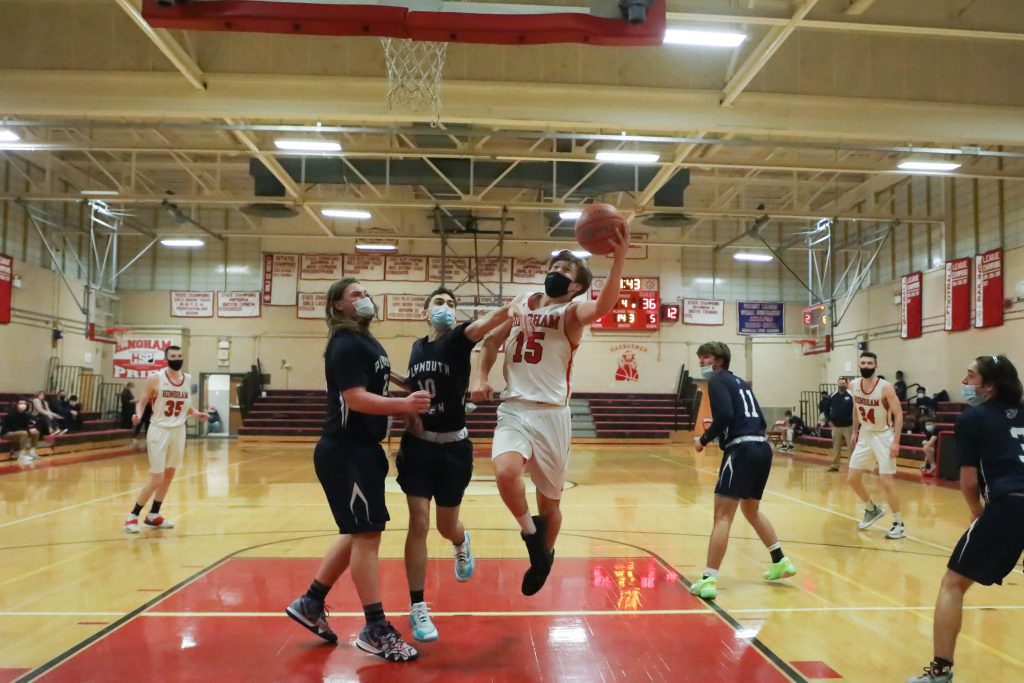 Senior Evan Williams gets a contested lay-up in the 4th quarter. 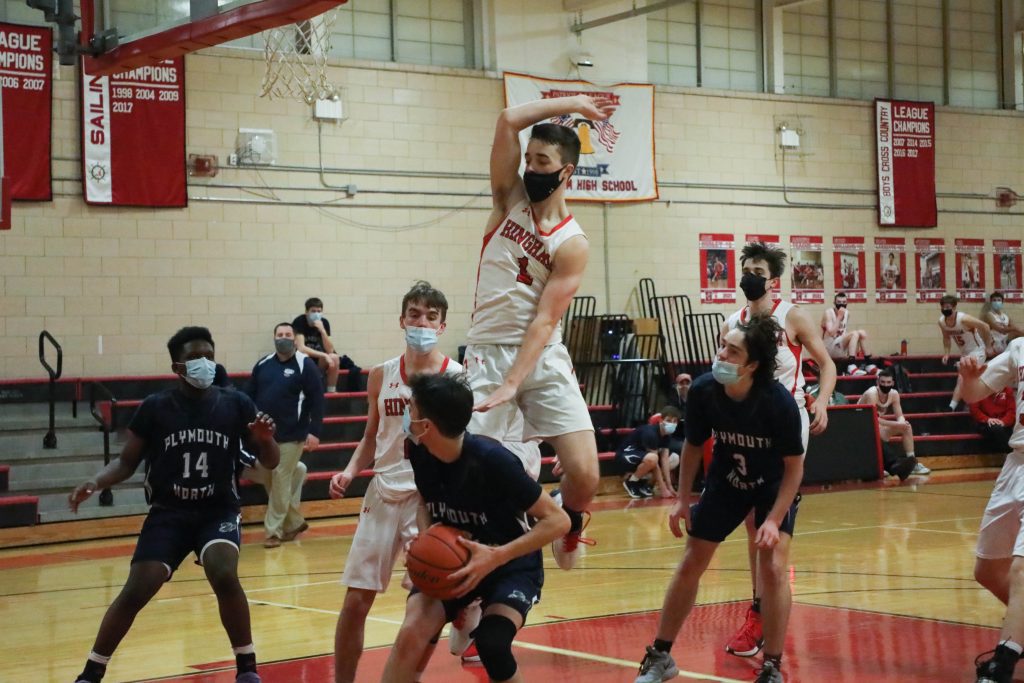 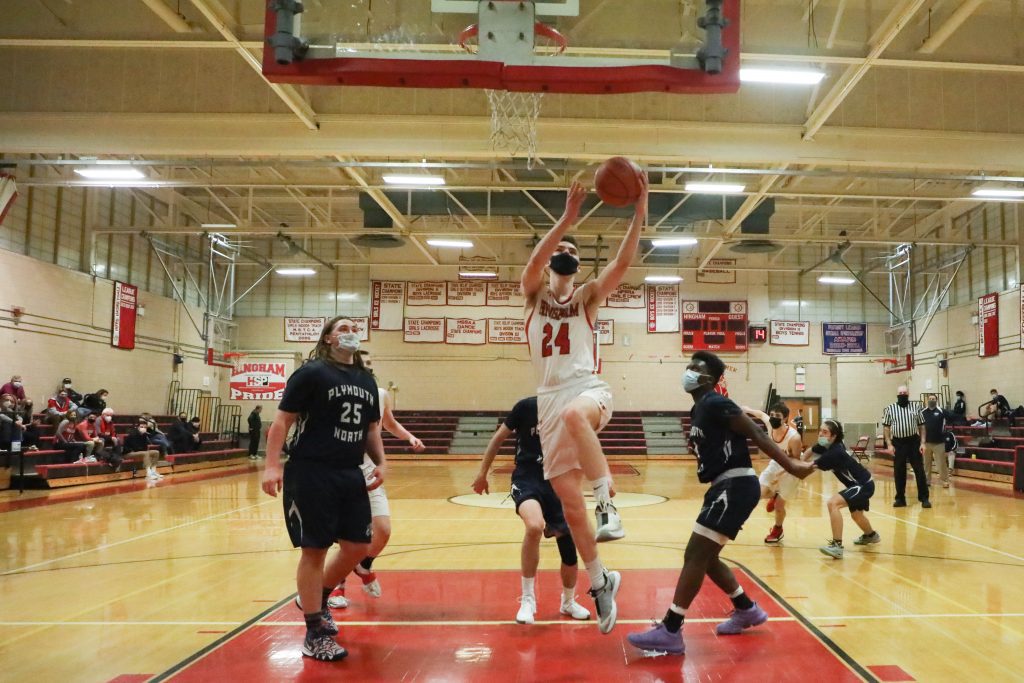 Senior captain Steven White with 2 of his 11 points in the 4th quarter.