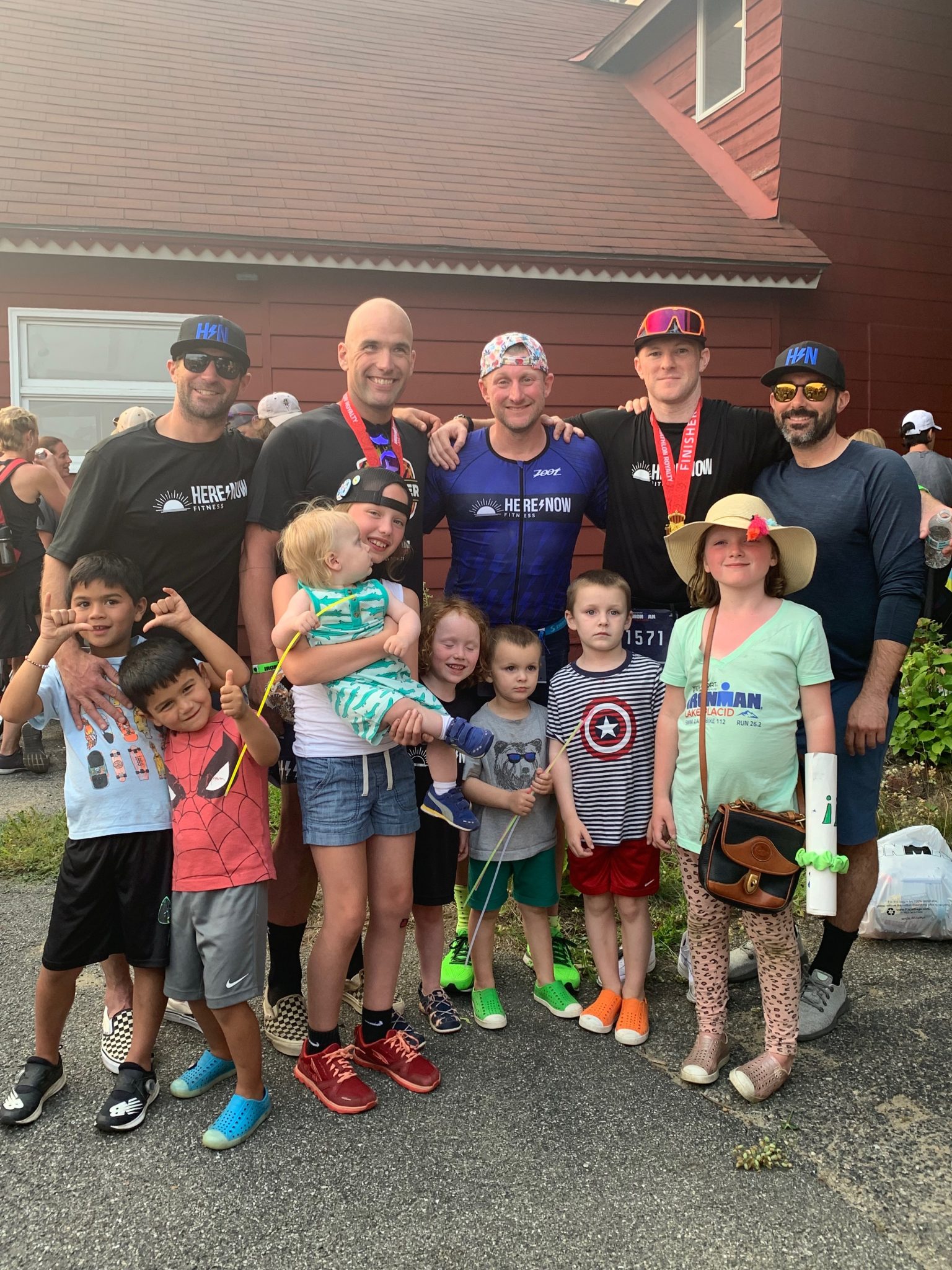 Thomas “Tom” Fleck, originally from Hull, lived in Hingham for eight years before relocating to Miami for a two-year stint; he ultimately returned to town two years ago, drawn back by the great schools—a priority for Thomas and his wife, Jess, as they have three daughters: Delia (age 10), Louise (8), and Zelda (4)—and Hingham’s proximity to, well, “everything.”

Tom is a triathlon coach for Here and Now Fitness, which he started two years ago with one coached athlete; he also daylights in construction management.

Fleck first became acquainted with fellow Hinghamites Connor Fitzgerald and Scott Caras when they approached him to assist in training them for an upcoming Ironman, hosted at Lake Placid. “Over the course of preparing together, I am happy to say that we have become friends,” Tom says.

To prepare, the three townies underwent a grueling training regimen. When asked what that entailed, Tom says, “Trade secrets—wink, wink! Ten to fifteen each week of intentionally-scheduled duration and intensity across biking, running, swimming, and weight training.”

The biggest challenge, according to Fleck? “Balancing the training load with all the other demands of modern life.” However, he says the most rewarding moment of his Ironman Lake Placid journey was “watching Connor and Scott cross the finish line, and how proud of them [he] was that they were able to persevere.”

Fleck’s next challenge will be tackling the Ironman 70.3 (half-distance) World Championships in Saint George, Utah this September, and then Ironman Texas next April. 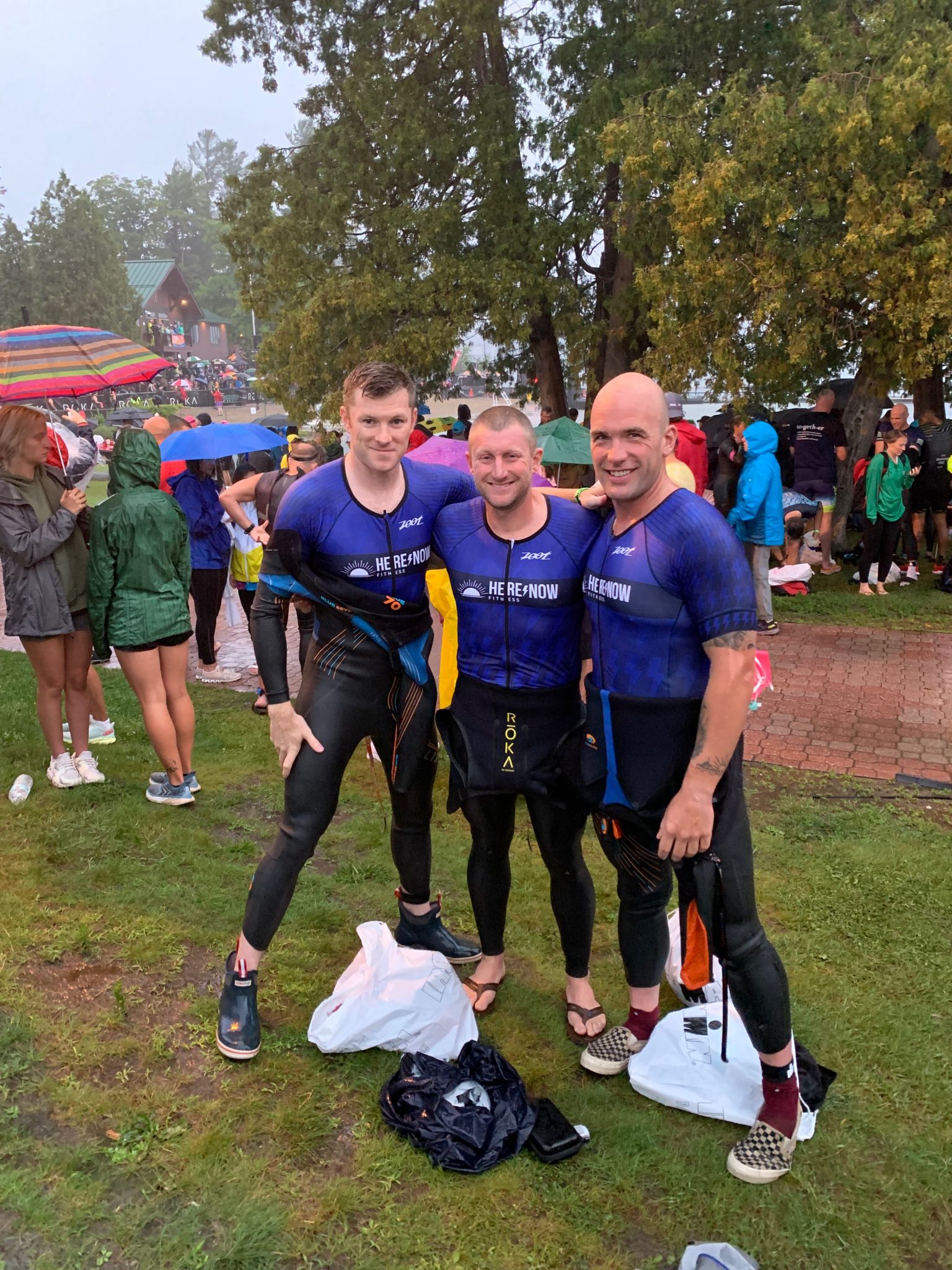 Scott Caras grew up in Cape Elizabeth, Maine, where he played a number of sports, including swimming competitively year-round from the age of six on. Despite growing up in Southern Maine, Scott’s mother grew up here in Hingham and their relatives remained in town throughout his childhood. “We spent a lot of time visiting my grandparents in Hingham and my aunt, uncle, and cousins, who still live in town today.” He recalls.

During high school, Scott says he developed an interest in lacrosse, which led him to playing for Bowdoin College; it was here that he met Connor Fitzgerald. The two played on the team together and became good friends. “We actually have four former members of our Bowdoin Lacrosse team who live in Hingham, and we’re all riding the Pan Mass Challenge together this weekend: myself, Connor, Chris Ryan, and Matt Chadwick,” Scott shares, adding, “I’ve always loved Hingham. When my wife, who grew up in Walpole, and I made the decision to move back to the Boston area from Connecticut, we were set on moving to the town.”

The Caras family—which consists of Scott, his wife Corey, their three sons Tucker (age 5), Cam (3), and Griffin (1) as well as a dog, Striper—have lived here for the past seven years.  “I couldn’t have done the training without Corey’s amazing support through the process, and I was incredibly lucky that all of them, as well as my parents, went to Lake Placid to watch the race.” Scott reveals. “Sharing the moment at the finish line with all of them is a highlight of my life, and while they are too young to really understand what I was doing in the race, I hope someday they will be able to look back on that and learn something from the experience.”

After that experience, Scott says he knew he wanted to challenge and push himself further: “With the support of a half dozen buddies in Hingham, we decided to pursue the 2021 Lake Placid Ironman 140.6.” He adds that the full Ironman is very different from the half distance, but given his training, Scott explains he felt confident that he could prepare for the race. However, he adds, “At the time I probably underestimated both the training that it would required and challenges of a race that length—it wasn’t two times as much work as the virtual half Ironman, it was ten times the work!”

Training was intense both in volume and time, as well as consistency. Scott Caras says, “Tom’s guidance as a coach was critical. His personality is incredible: he’s a magnet that others, like myself, want to be around.”

However, shortly after signing up, Scott’s younger sister Emily passed away from an unexpected and unexplained cardiac event. “The training became an incredibly important outlet for me in dealing with her loss, and she has been a huge inspiration to me in preparing for the event.” Scott shares. “She was a world-class swimmer growing up and had completed marathons and other events recently, and so the training was very relevant to her life and the time we had spent together growing up swimming as well.”

In December 2020, Scott applied and was accepted to participate in the Ironman Foundations “Your Journey, Your Cause” program, which allows participants to raise money for a cause that is important to them. “Shortly after Emily’s death, and given the deep impact she had on Maine Swimming, Maine Swimming established the Emily Caras Memorial Scholarship in her honor, which will be awarded to a high school senior each year. In order to help support Maine Swimming in establishing the scholarship, I committed to fundraising through the “Your Journey Your Cause” program in support of it, which provided further inspiration as I worked toward the race.”

His initial goal was to raise $10,000 to support the scholarship; however, thanks to the generous support friends, family, and the many people who were impacted by Emily, they have been able to raise over $40,000. “It is an incredible testament to the impact my sister had on so many people, and I am honored to be able to have supported the scholarship, which will be enable her to continue to make an impact as she did in life,” Scott reflects.

Hinghamite Connor Fitzgerald also competed in Lake Placid but could not be reached for interview. 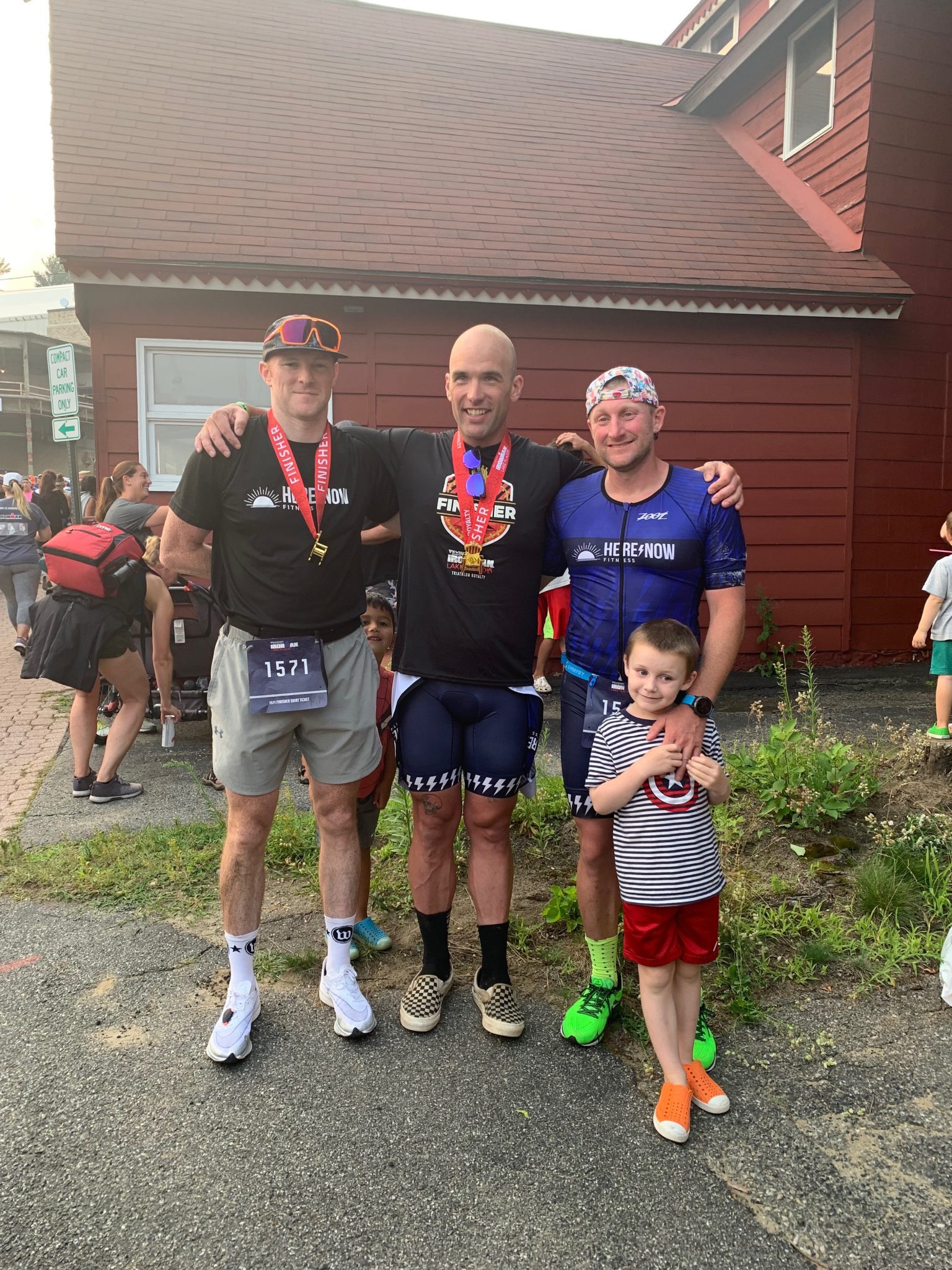