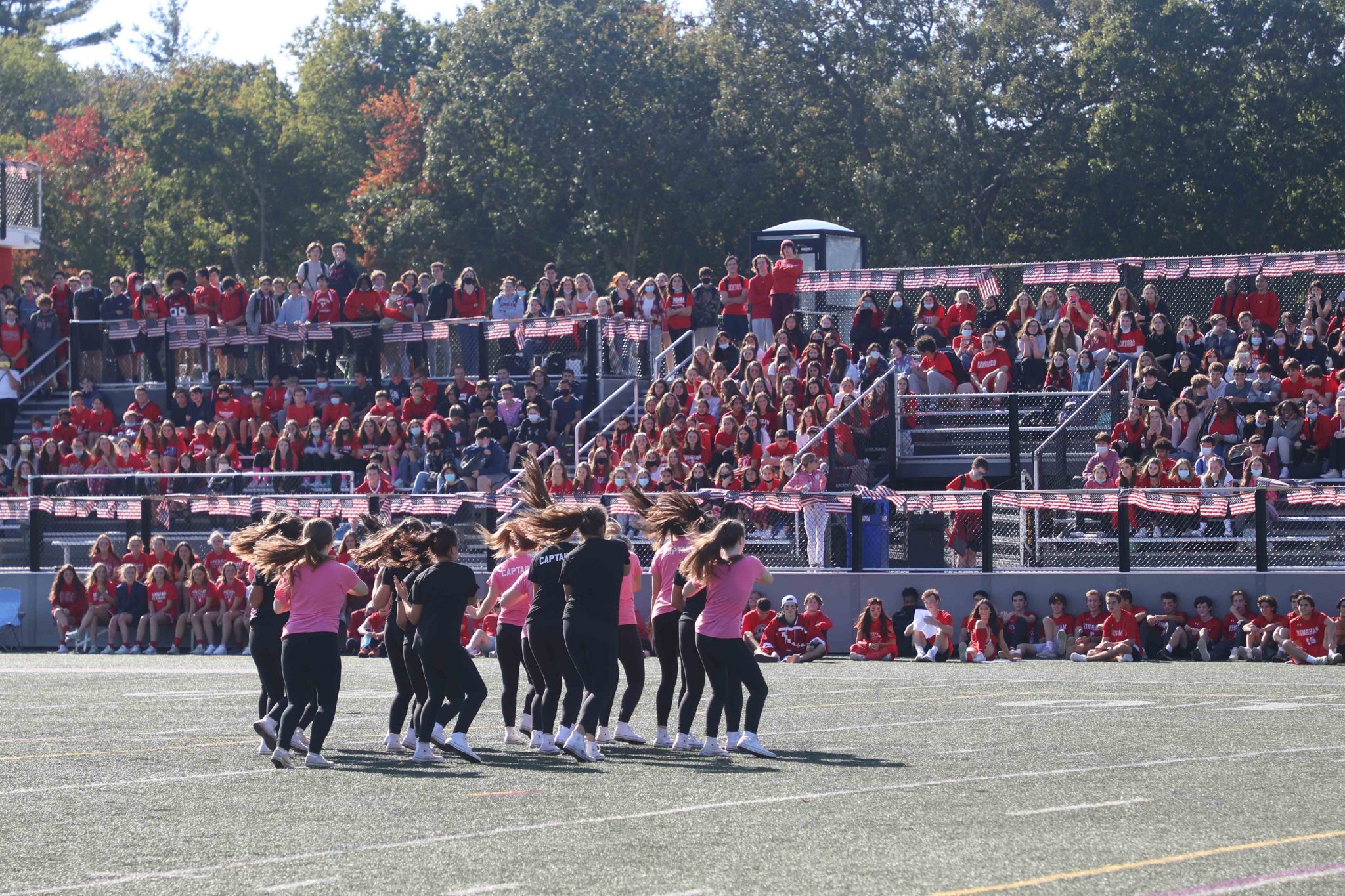 Homecoming kicked of Friday afternoon with a school wide pep rally in the high school stadium.

The festivities started early Friday afternoon as the whole school gathered as one for the first time in almost 2 years. The warm fall afternoon was a perfect setting to get the students and athletes ready for a full weekend of games and celebration.  Each fall team was introduced during the rally, followed by a dance team performance, a quick soccer scrimmage, and a three-legged race that pared senior and freshman siblings together.  It was also announced that Hingham High School was winner the Holmes Award for the third straight year.  This is awarded to the school with the highest winning percentage of all varsity sports combined.

The girls kicked off the competition in font of a pack gym on Friday night with their annual Dig Pink.  An event that helps raise money for Breast Cancer.   The Harborwomen beat a very good North Quincy team to move to 9-2 on the season.  The girls have put together 3 wins in a row after loosing their first 2 games of the season last week to Duxbury and Quincy.  Senior captain Lilly Steiner was player of the game, while sophomore Nora Schultz led the team with 10 kills, junior Olivia Nimboorkar had 6 aces, and junior Colette Hanney had 15 digs.

"I was really impressed with the girls," head coach Katelyn Sassorossi said of her team playing in front of full house.  "We are going to use the crowd's enegy and they were just excited.  They were pumped.  They weren't playing like I'm nervous playing in front of people, they were more like we want more people, we want the crowd. So they wanted to be watched and they prooved themselves in front of people so hopefully we get more fans in the future."

The full slate of Saturday games started at 9am with field hockey taking on Marshfield.  The tone was set early for what we could expect throughout the jam-packed day.  The game was pretty evenly matched in the first half.  Goals by junior Julia Glennon and senior captain Kyle Wilson led to a tie at the end of the first half.

The second half was all Harborwomen.  Hingham picked up their play, both offensively and defensively, shutting out Marshfield for the remainder of the game.  Wilson added her second goal of the game, while senior captain Kenzie Wilson also netted one in the second half giving Hingham the 5-2.  The girls continue to impress during this season, constantly coming up with big wins week after week as they vie for a Patriot League title.

Defense was the name of the game for the Harbormen as they faced Marshfield in the second game of the day.  The boys were back on the pitch 18 hours after their game the night before, in which they beat North Quincy 2-0 with goals from juniors Jack Murtagh and Aidan Brazel.

Whether it was the competition, the time of day, or the back to back games, the Harbormen just couldn't finish on some chances in the first half.  Both goalies made some timely saves keeping the score knotted at zero after the first half.  Hingham finally broke through at the 50' mark as Brazel scored is second goal in as many days giving the Harbormen the 1-0 lead.  That goal was all they needed that day, as they held on for their second shoutout win as less than 24 hours.

In probably the most anticipated game of the day, the girls soccer team faced off against Plymouth North.  A match were both teams were undefeated and both teams ranked two of the top teams in the state.  Like, the boys, the girls were also heading in the match with less than 24 hours rest, after beating North Quincy 9-0 the night before.

Unlike the boys though, Hingham found the back of the net early on in the game.  Junior Emily Gibbons put one past the Plymouth North tender 15 minutes into the contest.  The Harborwomen took their 1-0 lead into half time.  It didn't take long to extend their lead to 2-0 as junior Sophie Reale scored just a minute into the second half.  Senior Olivia Sharkansky added another one just 7 minutes later.  With the game well in hand, senior captain Alex Higgins headed a corner kick into the back of the net at the 77' mark.  Senior Kathryn Wilson recorded another shutout in net as the defense continues to stifle their opponents.

"We played with our hearts today and I thought ever single one of our players had an outstanding game," says head coach Sarah Dacey after the game.  "We have some great players and it great we have multiple players with multiple goals.  I want to give our defense a shoutout, I thought they played excellent today.  Solid all around."

The day capped off with rivals Hingham and Marshfield battling it out on the gridiron.  With stands packed, including Hingham's Pep band, the pre-game festivities included honoring the seniors and the parents of HHS Dance Team.  The Harbormen were looking to keep the momentum going from last week's 35-0 win over Whitman-Hanson.  Hingham took an early 7-0 lead in the first quarter on a TD catch by senior Jonathan St. Ange from QB senior Dylan Pierce.  Unfortunately, the tide turned for the Harbormen after that score.

The Rams marched down the field and scored, but missed the extra point, which still gave Hingham the 7-6 lead.  As the Harbormen were driving down the field on their next position, an unfortunate fumble gave Marshfield the ball back at around midfield.  The Rams took advantage of the turnover, and scored give them the 13-7 lead.  By half, the Rams were up 27-7.  The only highlight in the second half for the Harbormen was a 68 yard run by senior Nick O'Connor.  The final score was 34-13 Marshfield.  The team will travel to Plymouth North this week before returning home 10/22 to face Duxbury on senior night.