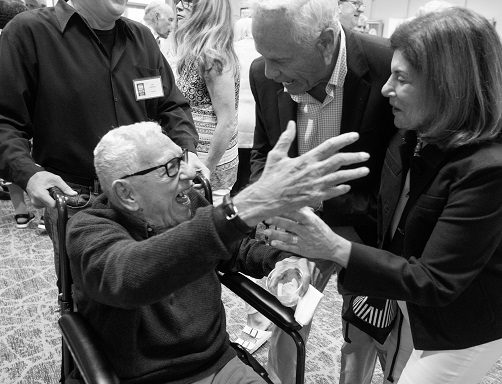 Dr. Waldo Lewis Fielding passed away at South Shore Hospital on January 1, 2022, aged 100.  A distinguished physician, obstetrician and gynecologist, Dr. Fielding began his four decade- long medical career providing care in the Pacific theater during World War II, grew his expertise in Harlem, established his practice in Boston, and shared his expertise with the next generation of doctors, serving on the faculty at Harvard, Tufts, and Boston University Medical Schools. Upon retirement, he returned to his first loves of singing and acting. Brilliant, wickedly funny, and socially active, he was known as simply ‘Waldo’ to generations of friends, family, patients and colleagues. If you were fortunate enough to share a bus stop bench with Waldo, he would tell you about a life more interesting than Forrest Gump’s.  But Waldo didn’t take the bus. No, he drove his BMW convertible, too fast, with the top down and the stereo cranking the Red Sox broadcast at full volume.

Waldo rubbed elbows with Babe Ruth and Louis Armstrong, was the closest of friends with Frank Avruch (better known to millions as Bozo the Clown), owned a restaurant with a couple of the Boston Celtics, and appeared regularly on local news, the Mike Douglas Show, 20/20, and Phil Donahue. At age 19, he was ranked sixth in the nation in table tennis.  He authored two books on childbirth and pregnancy ("The Childbirth Challenge," later known as “The Case Against Natural Childbirth" and "Pregnancy: The Best State of the Union”). Following the Supreme Court’s Roe v. Wade, Waldo became an outspoken advocate for the availability of safe, legal abortion. Waldo was protested and villainized, but continued to practice what he preached.  He devoured nonfiction and newspapers, and claimed to finish the New York Times crossword just about every day, though no one could verify this due to his doctor’s penmanship. He was halfway through re-reading Thornton Wilder’s “Our Town,” with a magnifying glass, when he died.  Waldo could mix a martini, tell a joke, sing you a song, beat you in tennis, and deliver your baby, all before lunch.  He was one of a kind.

So many he knew in his prime are gone, but the 150 who showed up to celebrate his 100th birthday all had stories to tell. Waldo was loved.

Waldo was also a terrible cook, which worked out well for the dozens of restaurants and bars where Waldo was a fixture, a bottomless tap of wit and wisdom, the life of the party. He had a knack for connecting with people. At his 95th birthday dinner, a waitress asked Waldo the secret of his longevity.  Waldo scratched his ear, the way he always did while thinking something over, then replied, “well, you just saw me order it - double vodkas, rare red meat, and extra salt.” They both just about fell over laughing.

Waldo loved nothing better than grabbing the microphone and giving a bar full of strangers the opportunity to know him and love him by filling the room with song. “Alabamy Bound” and “Pennies from Heaven” were always on the setlist, and with longtime collaborator Eddie Scheer on keyboard, Waldo nailed it every time.  A successful night ended with the crowd singing along, urged on by a round of drinks, on Waldo, for his new friends. He was generous to a fault.

O’Leary’s in Brookline gifted him his own Tiffany tumblers, kept behind the bar, which he continued to sip from very carefully after the rims cracked and became jagged. The Chart Room, in Cataumet, hosted his sing-alongs for years. They once opened for a day, off season, just to host a birthday party for his wife Anita.  He asked for that check for years. He was known to one and all at the Quarterdeck, and finally the Pub at Linden Ponds, his retirement home, where he loved to loudly complain that the crowd was “too old”.

Waldo Lewis Fielding was born on July 25, 1921 to Harriet and Bennett Fielding in Worcester, Massachusetts. An only child, he enjoyed a close relationship with his father, who introduced him to the Worcester YMCA when he was six years old. A lifelong YMCA member, he worked out four times a week, swimming and playing tennis. The Boston Globe featured Waldo, working out on his usual treadmill at the Huntington Branch in Boston, aged 91.

Bennett Fielding was “everyone’s doctor,” a highly respected general practitioner in Worcester and surgeon for the Worcester Police Department, and who inspired Waldo’s choice of a medical career. This was not an easy decision for Waldo, who dearly loved theater and sharing his talent, warmth and humor with an audience. Medicine won out, and he set his sights on becoming a doctor. "It was a big dichotomy in my life," he was quoted on his acting-vs.- doctoring dilemma in a 1995 article for the Worcester Telegram and Sun. “My father was very easy about it, but my mother was the one who insisted I become a doctor."

Waldo graduated from Worcester's Classical High School. “Doc” Fielding, as he was known within the first five minutes of his undergraduate days at Dartmouth (class of ’43, graduated ‘42), continued on to study in the College's two-year medical program, followed by two additional years of medical school at The University of Michigan at Ann Arbor. Waldo joined the Navy in 1942, trained at Naval Station Great Lakes, and served in the Pacific theater, caring for mothers and newborns in Guam, and later Truk, a remote Pacific atoll. His Navy service continued until 1948. 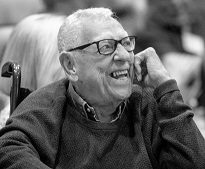 While there, Waldo was lined up, in formation beneath the hot sun to meet a visiting dignitary on an inspection tour as the personal representative of President Roosevelt.  It turned out to be the former President of Dartmouth College, who spied his former student Waldo, and interrupted his inspection to chat, and ask what he could do for him. Within weeks, Waldo was ordered to report to his dream job, at Bellevue Hospital in New York City.

Always the showman, he didn't completely cut performing from his doctor’s life. While serving, he put on shows for Navy trainees, and in 1948 appeared regularly as a comic on CBS' "Mississippi Music Hall" radio show during medical residences at Bellevue, Harlem Hospital and Hague Maternity Ward in Jersey City. From 1950 until 1952 he was Chief Resident in obstetrics and gynecology at New York's Harlem Hospital.

While working at Bellevue, Waldo met and married Suzanne Benjamin, (Sue Bennett), a vocalist on "Your Hit Parade," various network shows, as well as "The Sue Bennett Show.”  After accepting a job at Chelsea Naval Hospital, Waldo and Sue moved to Boston. Suzie did voice-over work for radio and television commercials while raising their two sons, Jed and Andrew. Waldo later joined the Medical Associates of Massachusetts Memorial Hospital before going into private practice in 1954 until his retirement in 1990. Suzie passed away in 2001, but was kept alive through Waldo’s many loving stories about her.

Providing medical care for women was his life’s work. Waldo was introduced to obstetrics in medical school and knew then that it would become his specialty. He loved his work and often said, "You can't find a happier doctor than me." One part of that care, after Roe v. Wade, was to provide safe abortions. Waldo opened and was head of Pre-Term Health Services Clinic, which provided a full-range of OB/GYN services in Brookline. In 2008, when it appeared the Supreme Court was becoming more conservative, Waldo penned an essay in the New York Times, recounting his experiences with the treatment of the after-effects of illicit procedures during his early training at Bellevue and Harlem Hospitals, and advocating for women to finally enjoy “the full rights of first class citizens.” He was a tireless advocate for a woman’s right to choose.  He was proud of his participation in the PBS documentary “No Choice,” in which he was interviewed by Pamela Mason in the summer of 2017.

Waldo couldn’t get a parking ticket in Brookline if he tried, since so many officers were among the thousands of Boston newborns delivered by his hands. He once parked his convertible across two spaces, left the driver’s door open, keys in the ignition, while he went to lunch. When he returned, all the meter maid said was “I’ve been waiting for you Waldo, nice to see you!” After saying thank you and hello, Waldo turned to his lunch companion and murmured, “Who the hell was that?”

It was after retiring from his medical practice that Waldo could devote his time to his other love, entertainment. Waldo’s connection to show business began with his first wife Suzie, and his own talent grew over the ensuing decades. Waldo acted in over 70 community plays, and brought many to tears with his performances of “Love Letters”. He was a valued patron of the Cotuit Center for the Arts on Cape Cod, and gifted the center many long-lost manuscripts from his personal collection.

It was during this time in his life that Waldo met Anita MacKinnon, organist, mother of six and longtime nonprofit advocate. From their first meeting at O’Leary’s, they were inseparable and happy, always out and about at the theater, performing music, and enjoying friends and family. Anita is a member of the College Club of Boston, where Waldo appeared in “Love Letters” and several cabarets. Waldo and Anita married in November 2014, and divided their time between Brookline and East Falmouth. Anita liked to sit in the passenger seat of the convertible and concentrate on the Red Sox broadcast and the knitting in her lap, or chatting on the phone, anything to avoid seeing Waldo’s driving. Waldo and Anita settled at Linden Ponds in Hingham, MA, in 2018.

In addition to Anita, he is survived by two sons: Jed Fielding of Chicago, IL, an internationally recognized street photographer; and Andrew Fielding of Pompton Lakes, NJ, a radio talk show host and author of “The Lucky Strike Papers - Journeys Through My Mother’s Television Past,” a book about early network television in the 1940’s and 50’s.

A private memorial service will be held at a later date. In lieu of flowers, Waldo would be thrilled by donations to the Geisel School of Medicine at Dartmouth, and to the Cotuit Center for the Arts, Cotuit, MA.