Citizens who have walked or driven to the Harbor area for any of the high or ‘king’ tides in the last several years, and especially those who saw the results of the two March 2018 winter storms, know that Town Pier Wharf and the other town owned harbor wharves are ever more frequently being overtopped by high tides and wave driven storm surge. These occurrences have weakened the granite block wall, created unsafe conditions such as potholes for pedestrians walking the edge of the wharf and put use of Town Pier for boater access to the harbor at risk since the wharf is bowing and granite blocks are falling into the water.

Beginning in 2015, the Harbor Development Committee (HDC) developed an action plan to address those conditions and consider the effects laid out in the ‘Climate Change Vulnerability, Risk Assessment and Adaptation Study’ prepared by marine consultant Kleinfelder. Over the next two years, with funds appropriated by two prior town meeting votes, marine engineers Beals and Thomas prepared structural assessments, performed borings and bathymetric studies and provided HDC with the basis for developing design drawings and preparing permit applications for the repair and reconstruction of the wharves. Considerations included the proposed wall elevation increases, the choice of materials (granite, steel, concrete, etc.), the wisdom of targeting a single uniform height for all of the harbor wharf structures and the appropriate sequence to repair each wharf.

In all of these discussions HDC weighed three primary criteria: 1) safety for use of these wharves by town citizens, 2) cost to the Town over the life of the wharves for necessary repairs and resiliency against sea level rise and storm surge and 3) the aesthetic appearance of these iconic and historic granite block wall structures. For Town Pier Wharf, HDC’s final recommendation in 2018 was to proceed with a reconstructed granite wall appearance to a new height of 11’ NAVD (16.2’ above mean low water, and 3.8’ higher than the existing wall), with the ‘modular ability’ to add another 1.5’ of elevation at a later date, as necessary. The Town’s Board of Selectmen (BOS) approved that recommendation and Beals and Thomas proceeded in 2019 and 2020 to prepare detailed engineering drawings sufficient for permit applications.

Also in 2020, with BOS concurrence, HDC opted to prioritize Town Pier Wharf as the most used and active of the Town owned wharves and the wharf furthest along in conceptual design. Proceeding sequentially, with the other wharves to be addressed in subsequent years, would also allow the Town multiple opportunities to request the numerous state and federal grants available to reduce the net cost to taxpayers. Given the current economic and political climate, now is the time to ask for those funds for Hingham.

Article 20 in the warrant for this year’s Annual Town Meeting on May 8 would appropriate up to $5,650,000 (reduced by any grant proceeds) to reconstruct and raise the wall height of Town Pier Wharf. HDC sees the following benefits of this article:

Given the amount of attention being paid to the effects of climate change, and projections which call for ever higher tides over more prolonged periods, HDC is well aware that reconstruction and elevation of Town Pier (and, in time, the other two Town owned wharves at the Vietnam Veteran’s Park and Barnes Wharf—home to the Hingham Maritime Center) will necessarily require later additional steps as part of a layered defense to mitigate those effects. The work in this proposed article targets protections for the medium term.

All the members of your Town’s Harbor Development Committee ask for your positive vote on Article 20! Both the Board of Selectmen and the Advisory Committee also unanimously recommended positive action on Article 20 to reconstruct Town Pier Wharf. 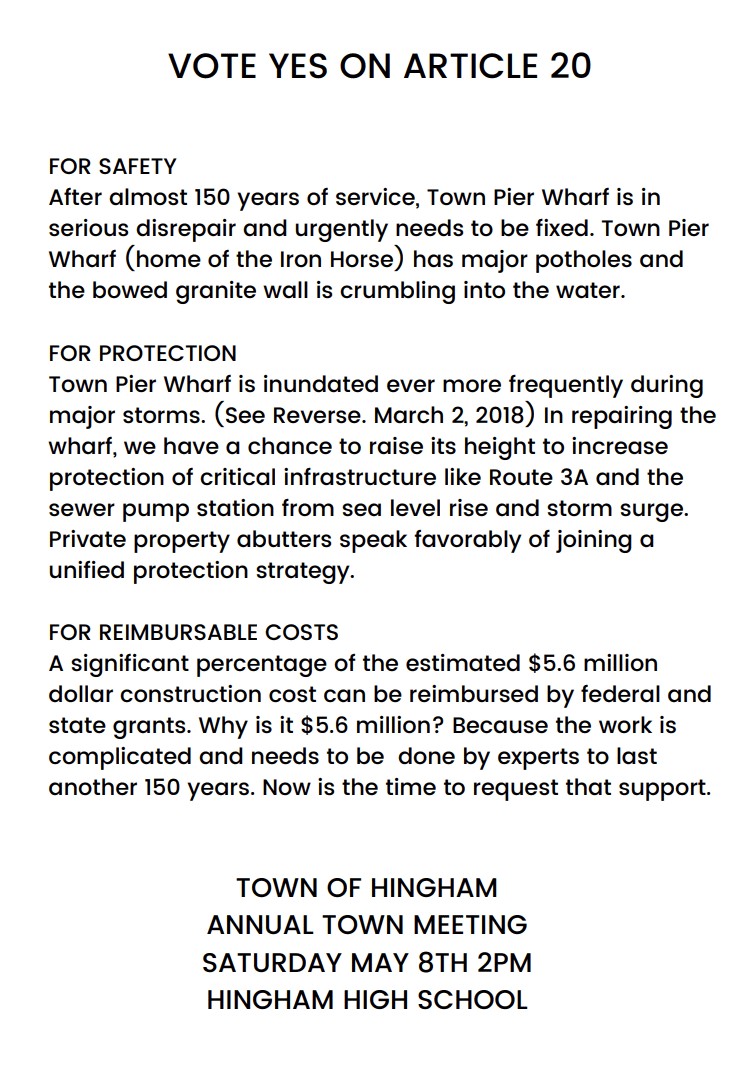