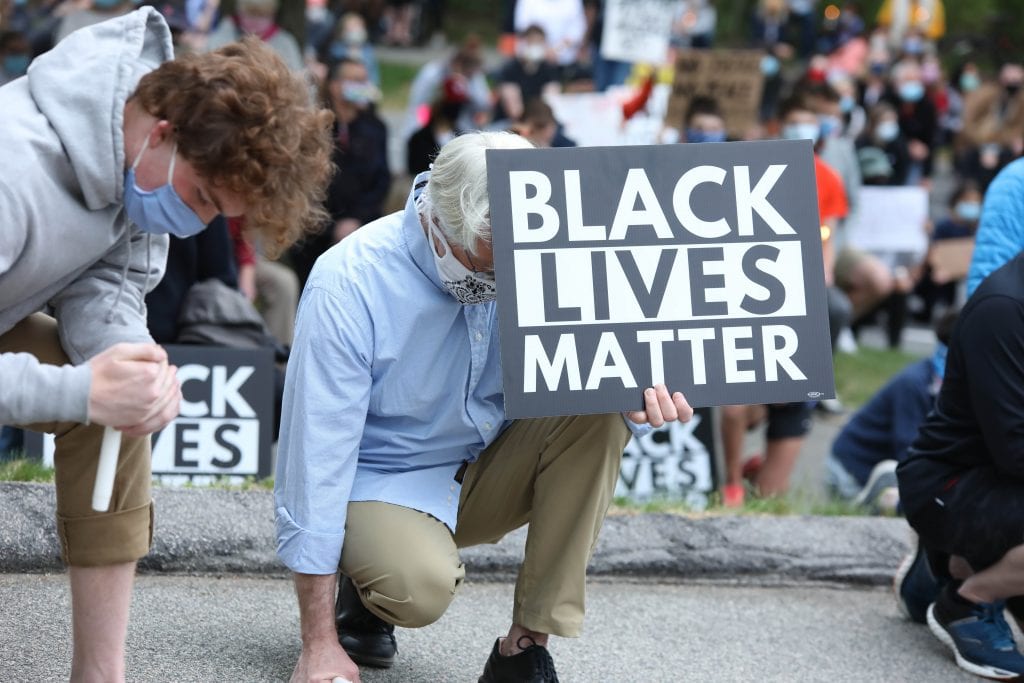 June 2, 2020 by Hilary Jenison (All Photos by Joshua Ross Photography)

Tonight, Tuesday, June 2, an estimated crowd of 1,000 people attended a peaceful candlelight vigil at St. John's Church to show support of Black lives. The event was sponsored by the Hingham Unity Council, a local group formed in 2020 to raise awareness and promote constructive dialogue concerning issues of inclusivity in our community. 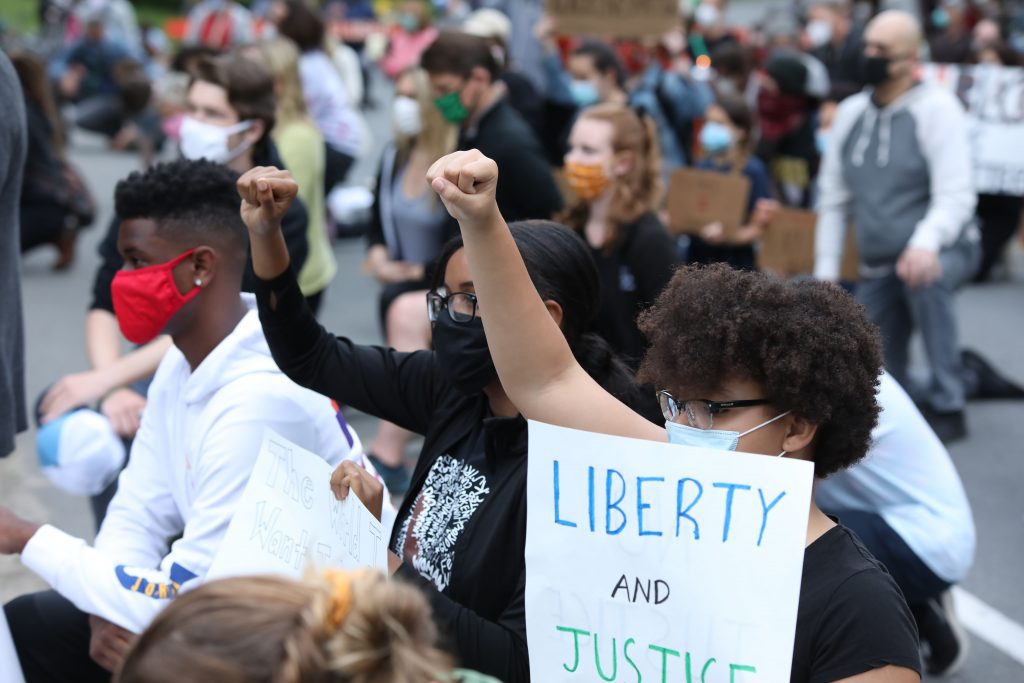 A group member was approached about doing something locally by Hingham resident Lisa Parsons, whose daughter, Ella Poggenburg, wanted to attend the Black Lives Matter & Violence in Boston Inc. event.  Many of the Unity Council members were struggling similarly with how to show support while also avoiding exposing (or being exposed) to COVID-19 in a larger crowd of supporters, so the “socially distant" Hingham event was planned.

“My inspiration for the vigil was that I wanted to take part in a protest of some kind to highlight the racial injustice in today's world, but the larger protests were getting violent and unsafe,” shared Ella, a 14-year-old student at the South Shore Charter School. “Tonight was so powerful and emotional when everyone took a knee, and the amount of people that showed up made it feel really empowering.” 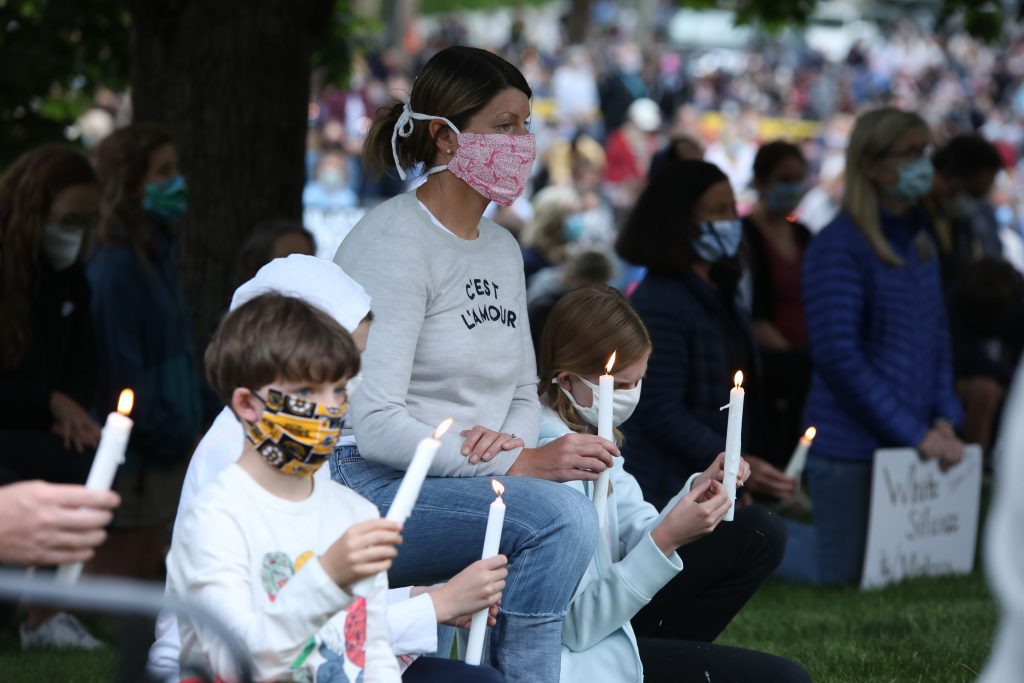 "My daughter has been deeply affected by what is going on in the world- like a lot of kids. I wanted her to feel empowered instead of helpless. I am proud of her convictions and that she motivated me to reach out to get the ball rolling to make this happen,” said Parsons. “She was able to see that there are many ways to magnify her one voice- it went from her idea of wanting to do something to involving hundreds (maybe a thousand?!) of other voices. It’s a powerful lesson.”

The event began with inspiring remarks from Reverend Tim Schenck, Rector at St. John’s Church. It concluded with eight minutes and 46 seconds of silence to mark the time when the late George Floyd was pinned to the ground by a Minnesota Police Officer.  Prior to the period of silence, Rev. Schenck reminded attendees that at the conclusion of the event “what will just begin will be our work, our continuing work, for justice.”

Throughout the silence, which both began and ended by bells ringing, all attendees took a knee. 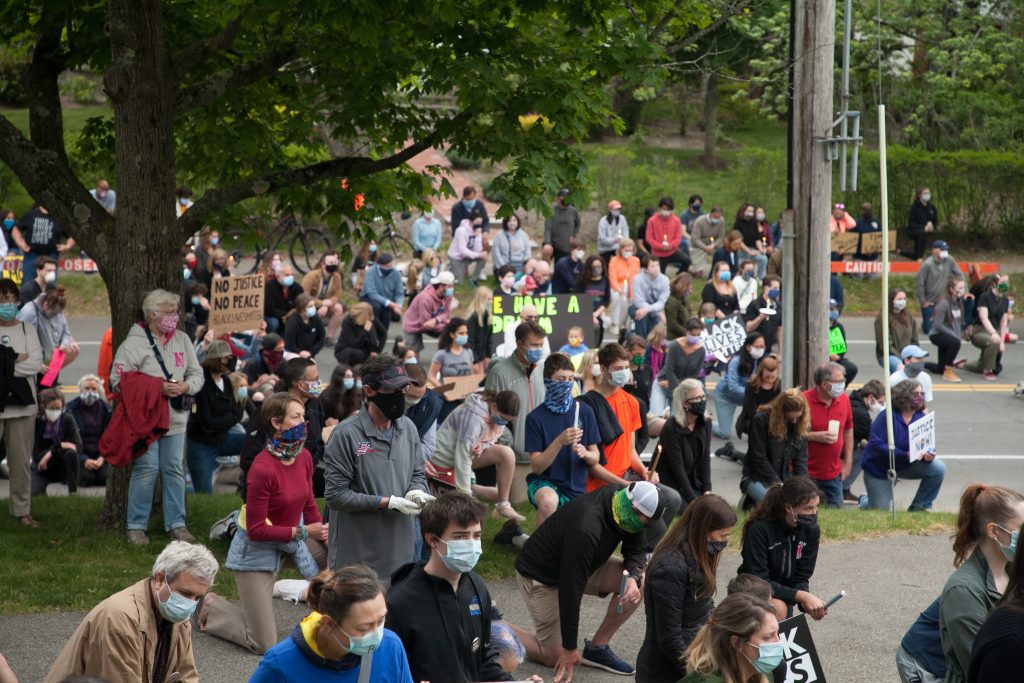 Ella continued, “I was surprised that everyone was cooperating so well and that nobody was talking during the silence. Kneeling for over eight minutes makes you realize how long it really is and how many opportunities the officers involved in George Floyd’s death could've had to interrupt.”

Hingham police were well represented at the event.  Earlier today, Chief Glenn Olsson shared a statement on the Death of George Floyd that reads:

”Chief Glenn Olsson and the men and women of the Hingham Police Department, along with the Massachusetts Chiefs of Police Association, the International Association of Chiefs of Police, and forces across the country, condemn the actions of the four Minneapolis police officers that resulted in the senseless and tragic death of George Floyd. As Officers we also share the feelings of the everyday person. Our thoughts and prayers go out to the Floyd family. We are all shocked and upset by the actions of the Minneapolis police officers. Those actions are in direct conflict with the rules, values, and training Hingham Police Officers live by. We cannot allow actions like this to go unpunished. The Hingham Police Department’s mission is to protect the safety of our community. We remain committed to doing so without prejudice or the use of unnecessary force. We stand in solidarity with the citizens of Hingham and will continue to work with the community as partners and treat all citizens with dignity and respect.”

The health of the Hingham Community was a primary concern for event organizers, and attendees alleviated those concerns by wearing masks and respecting the ask to keep social distance between non-family/household groups despite the large crowd in attendance. 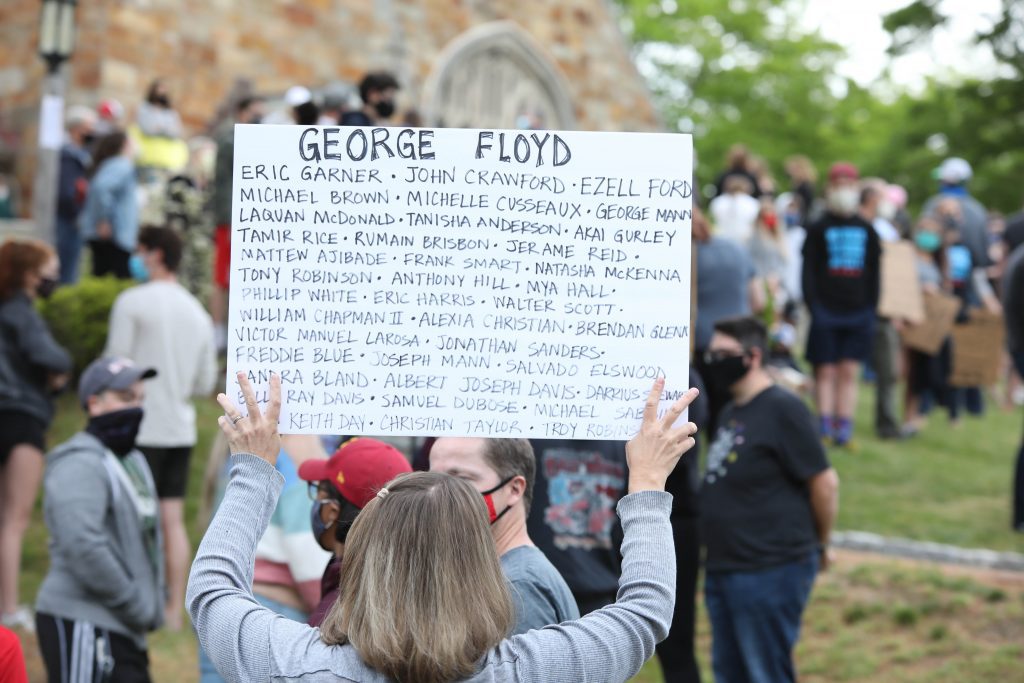 The Hingham Unity Council has a committee on race that had two events planned in March and April that unfortunately had to be postponed due to COVID-19, but they are now in the process of planning an online event.

The Council also has a committee focusing on issues of socioeconomic disparity and one on LGBQT+ issues. If you are interested in getting involved or attending one of their upcoming events, please visit hinghamunity.org and join their mailing list (add info@hinghamunity.org to your address book) or follow them on Facebook at https://www.facebook.com/hinghamunitycouncil/

A full slideshow of photos from the vigil can be viewed here: