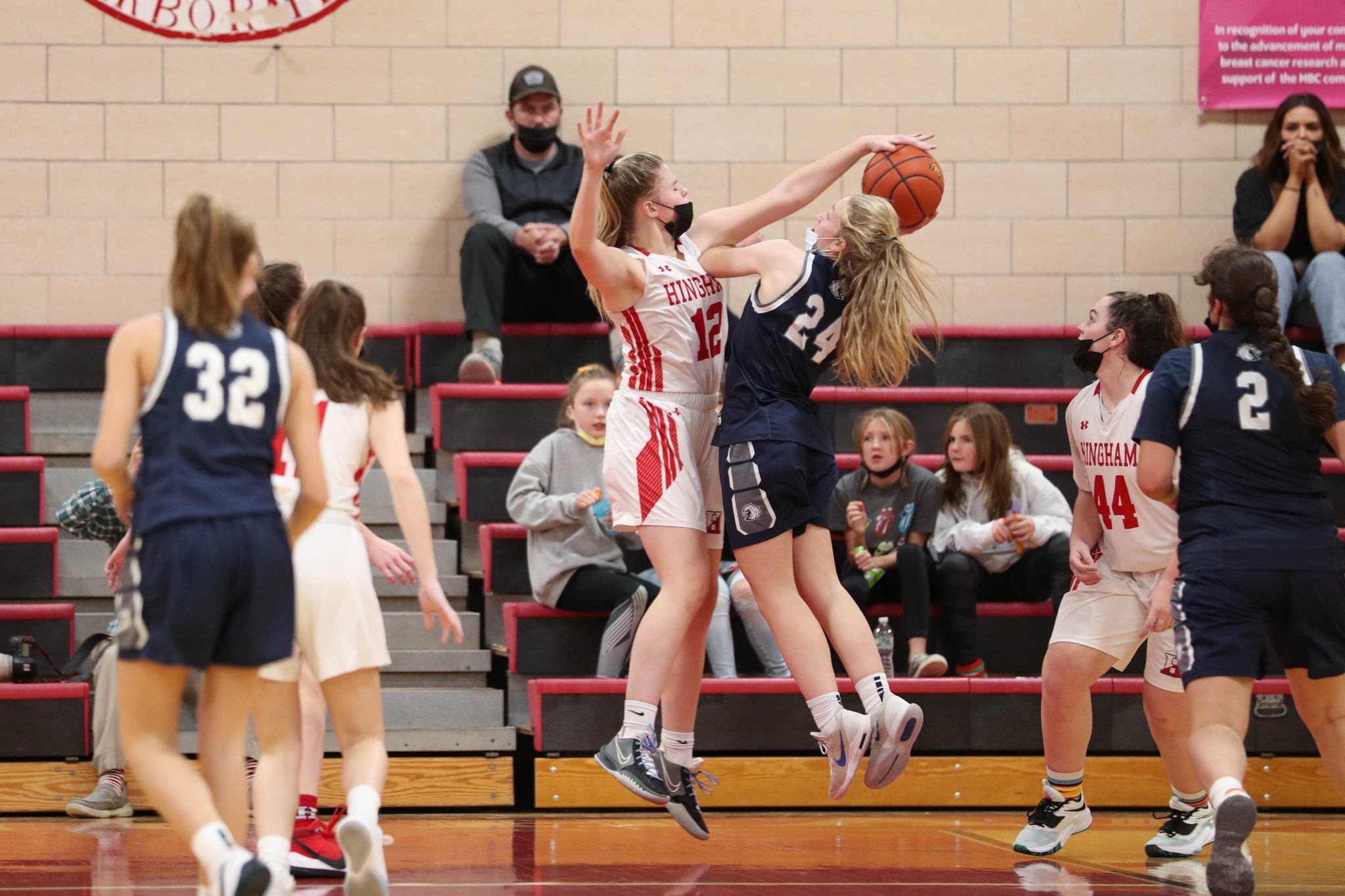 The girls basketball team opened their season last week, under new head coach Roland Millien, with two wins.  They won on Tuesday night 65-41 against Hanover and 55-29 on Friday against Plymouth North.  While the team returns almost everyone from last year, only losing graduating senior Abby Foley and junior captain Caroline Connolly (transferred schools), there seems to be a different style with the team this year.

For what seems like a decade, there has always been a Blasetti as the focal point of the offense for the Harborwomen.  Senior captain Perry Blasetti, like her sisters before her, will continue to draw most of the attention, and rightfully so, from their oppenents.  However, even with such a short sample this early in the season, there seems to be a conserted effort to take advantage of this and get other players involved early and often.  The ball movement and set plays are noticeable different than in seasons past.

The numbers don't lie.  In Hingham's win on Friday, 10 players scored and all 13 Harborwomen got to see playing time. Returning players like senior Colleen Johnston, junior captain Colette Hanney, and juniors Sarah Holler and Ellie Savistcus are showing they will be players teams need to watch as well.  Coach Millien, who is still trying to feel out his new team, is liking the improvements he is seeing from his team, even between the first two games.

"Their intensity," answers Millien on what he likes about his team. "Last game we had a tough time on the offensive glass and the defensive glass versus Hanover and this game, in particular, we located our girl, we boxed out, and we were able to get the break going off of the box out."

Millien attributes a lot of the team's offensive success to what they are doing on defense.

"We're a team that lets our offense get dictated by our defense," he exlpains. "So if we're not playing defense, not talking, not moving, we can't get our offense moving.  So we need to talk, need to move, need to box and go."

So far the defense has been outstanding.  Only allowing eight second half points against Hanover and keeping Plymouth North to under 30.  The girls seem to be buying into one of Millien's philosophies to finish the games stong.

The first year coach also added a few things that has stood out to him already during his short time in Hingham.

"The amount of love the fans give.  They come out and really support their team. And I think the chemisty with this team.  I said this before to the parents.  I said this team really loves each other and I think when you have a bond and you have chemistry with each other, it allows you to trust people to make the right decisions and they trust each other because they love being around each other." 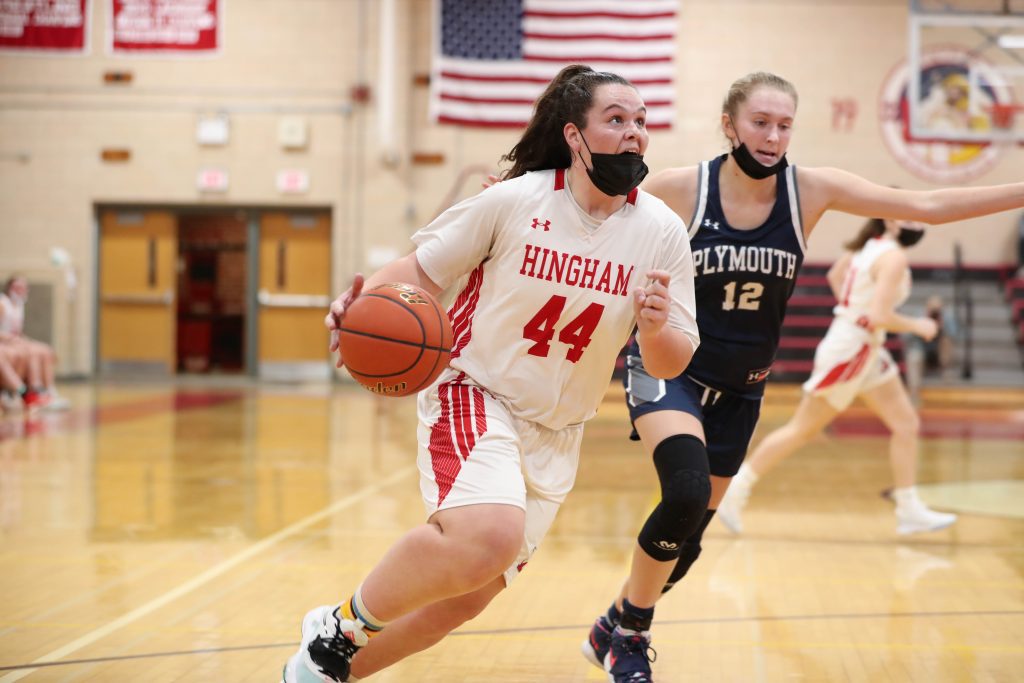 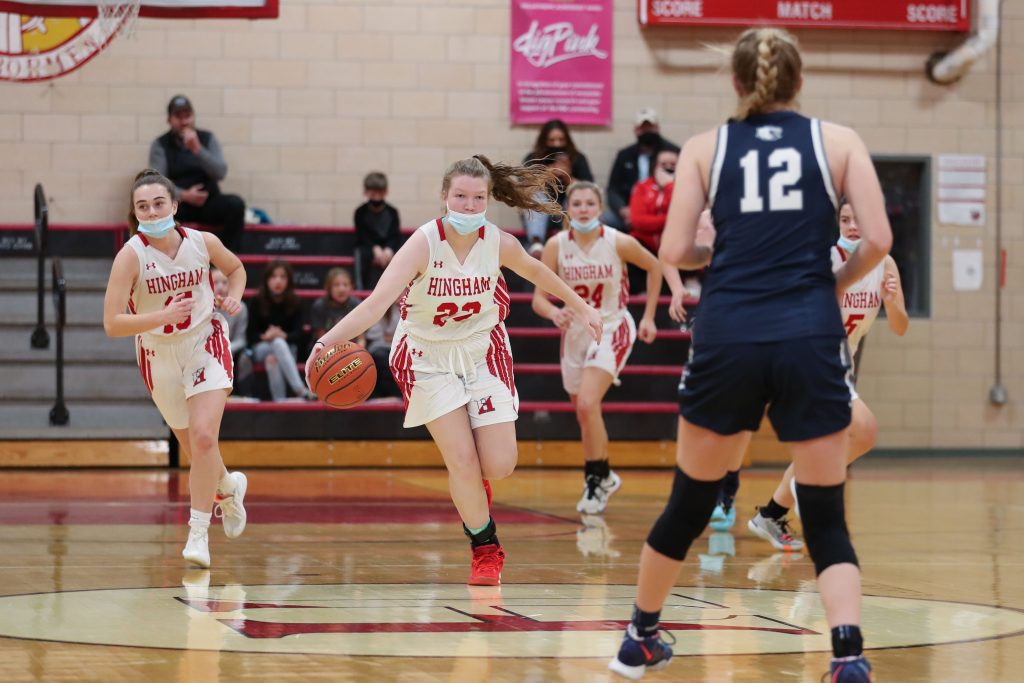 Senior Kathryn Wilson brings up the ball up court in the first half. 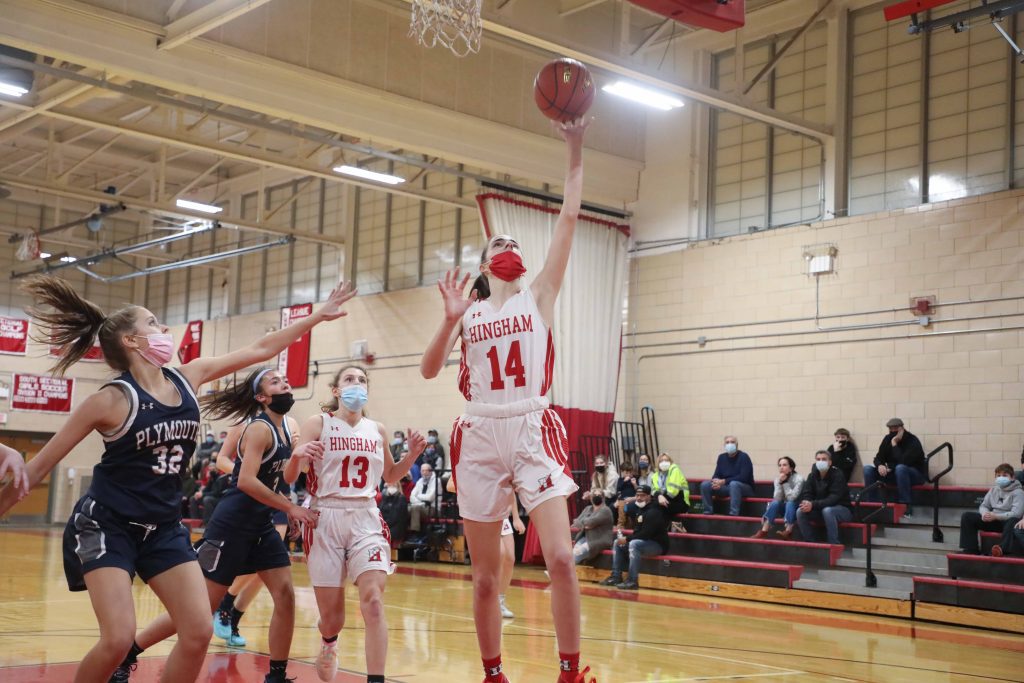 Sophomore Marissa Matthews making the most of her early season opportunites with a first half basket. 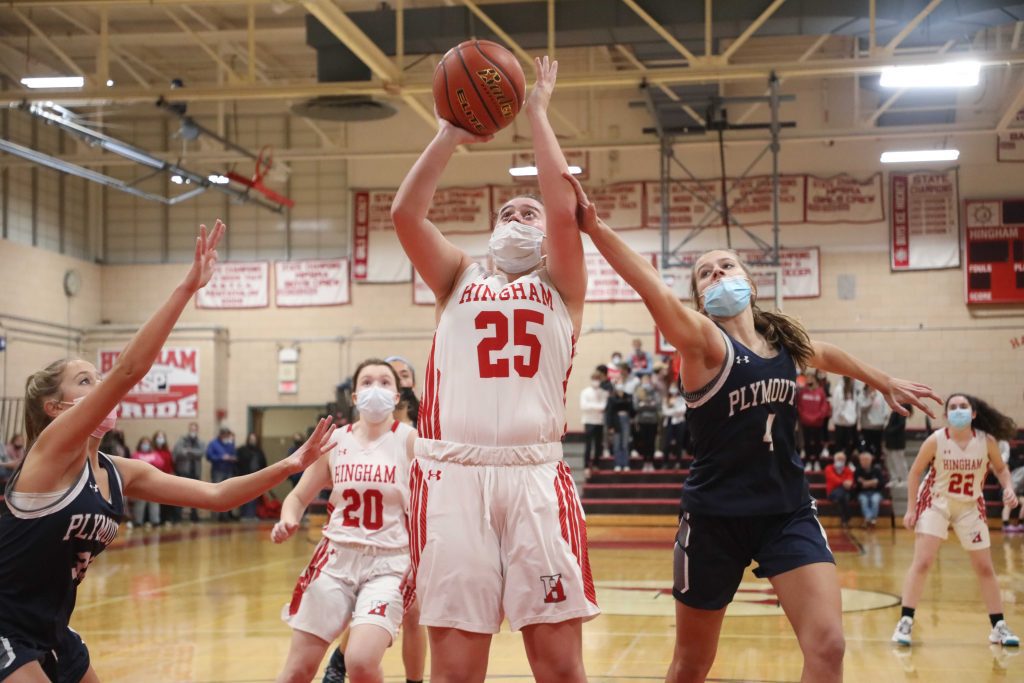 Senior Lindsey Triggs still fights for rebounds near the end of the game. 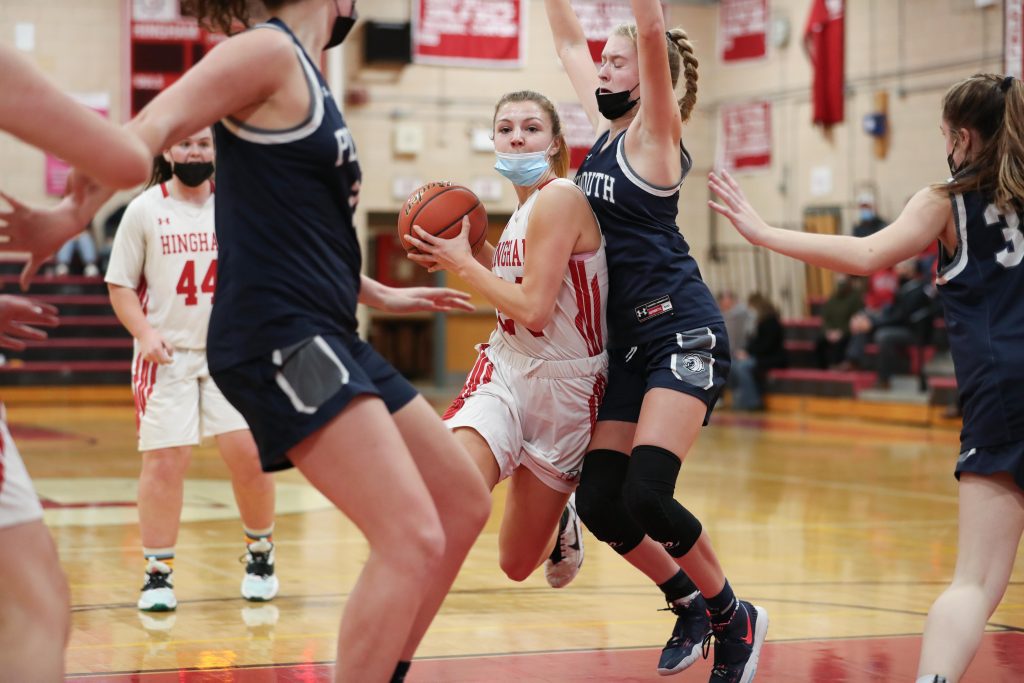 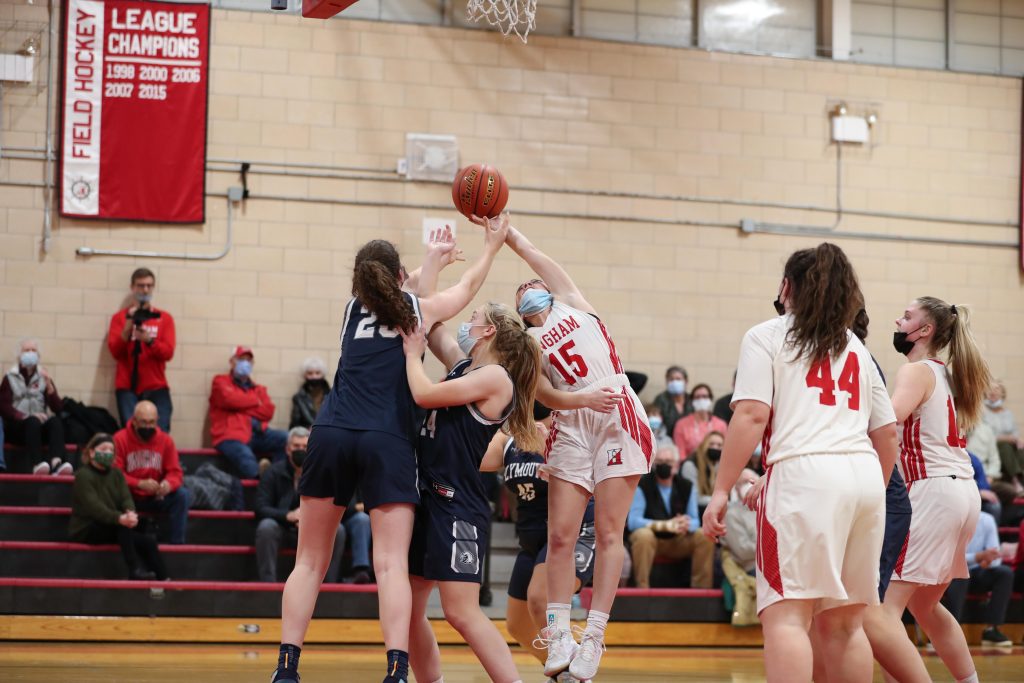 Junior captain Colette Hanney stretches for a loose ball in the second half. 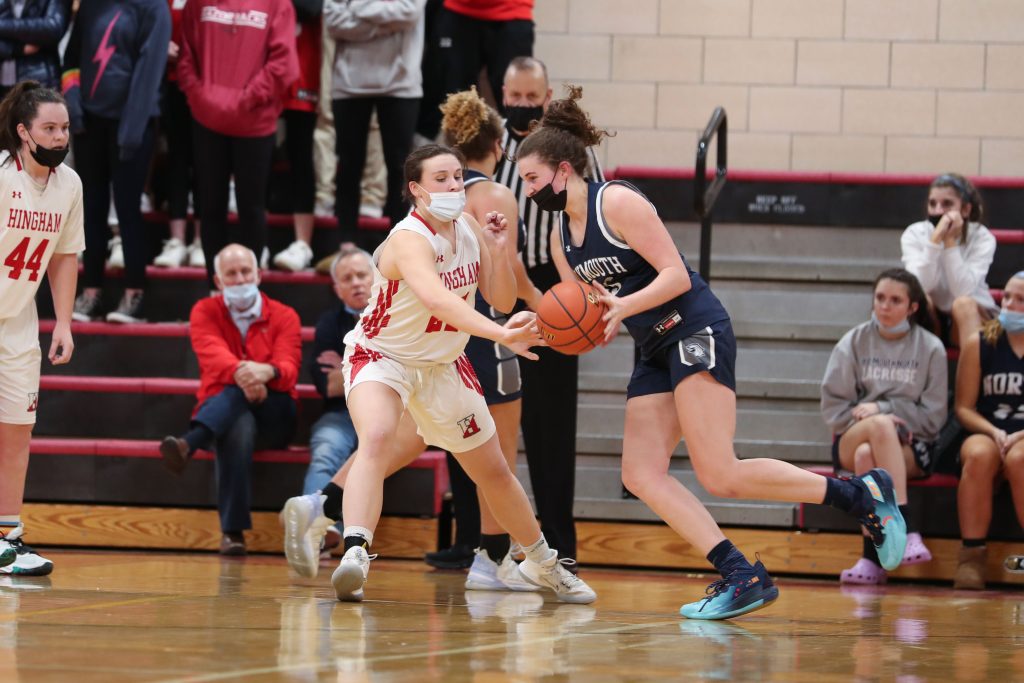 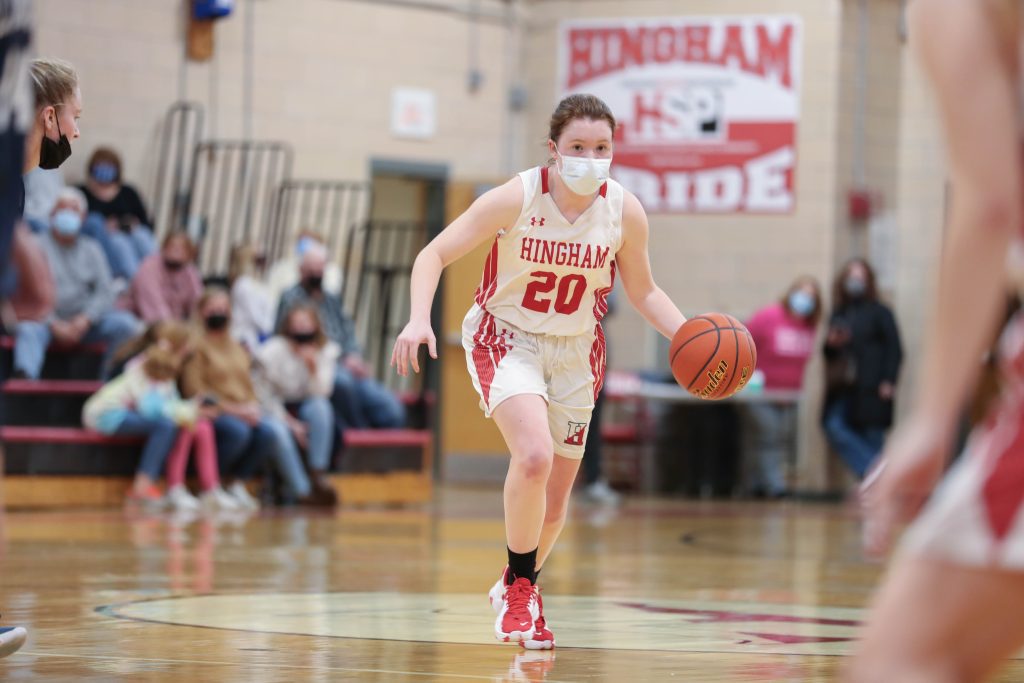 Senior Madison Aylward finished with 6 points as one of 10 players who scored in the game.