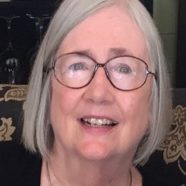 Martha led a joyous, vibrantly full life in constant connection with her family and many treasured friends from across the world. She embraced any opportunity to celebrate her loved ones, showering them with poetry and song, thoughtful gifts and chocolate delicacies. She reveled in her Irish and German heritage, organizing Reardon, Cashman and Leich family reunions at home and abroad, and singing Irish ballads and German Christmas carols with equal enthusiasm. She was known by all for her intellect, humanity and sincere care for others. Friends and family often sought her out for her sound and wise advice or, if she was unavailable, pondered WWMD: “What would Martha do?”

Martha was the eldest child of the Hon. Paul Cashman and Ann Leich Reardon. She grew up in Quincy, MA, near to her grandparents and numerous aunts, uncles and cousins. After graduating from Thayer Academy and Wellesley College, Martha lived for several years in Cambridge before buying a wonderful bungalow on Otis Hill overlooking Hingham harbor. She loved her home and happily shared it for 15 years with her late husband John A. Bewick.

After college, following five years as a textbook editor at Houghton Mifflin, Martha became the Manager of Business and Transportation at the South Shore Chamber of Commerce. She managed the startup of the Hingham-to-Boston commuter ferry and personally pursued its enhancement and viability until her death. That success resulted in Martha being appointed Associate Commissioner of the Massachusetts DPW by Governor Ed King. Simultaneously she was named Board Secretary of the International Marine Transit Association, a position she held for more than 20 years, traveling the world on behalf of increased ferry service.

In 1987 she founded Harbor Consultancy International, focusing on ferry system planning and design. Martha’s firm belief in Hingham’s vigorous ferry service prompted her and husband John to lead the fight against the development of the MBTA Greenbush train service to the South Shore as an over-expensive, unnecessary burden to the ferry system. They lost the battle but won the concession that the trains pass through Hingham Square in a tunnel. This past year, Martha was also asked to represent the Town of Hingham on the MBTA Advisory Board, to which she enthusiastically agreed in hopes of continuing to protect and champion the Boston Harbor ferry system she so believed in.

Along with her ferry transportation work, another of Martha’s lifelong passions was music, and she found many venues through which to share her musical talents. She was a performer in the Cambridge Revels for many years, and a cantor at St Paul’s Church in Hingham for more than four decades. She was also a member of the Boston Symphony Orchestra’s Tanglewood Festival Chorus from 2006 to 2022, and greatly enjoyed summers in the Berkshires while performing at Tanglewood.

In her later years, Martha turned her focus to history, researching and writing a book for the Hingham Historical Commission. Tranquility Grove, The Great Abolitionist Picnic of 1844, published in 2018, detailed an extraordinary Hingham event at which an estimated 10,000 visitors gathered to hear the speeches of Frederick Douglass, William Lloyd Garrison and Wendell Phillips, all ardent abolitionists. Martha’s book also suggested how the town could better maintain and interpret the land of Tranquility Grove in the future. At the time of her death, Martha was actively collaborating with landscape, history and fundraising professionals on a plan to turn the grove into a significant historic site and park.

Martha was a fellow of the Massachusetts Historical Society, and served on multiple non-profit boards, including that of the Cambridge Revels, South Shore Conservatory, Thayer Academy, Pilgrim Society and Plimoth Plantation. She also remained very active within the alumnae organization of Wellesley College, maintaining regular contact with her many Wellesley peers as secretary of the class of 1962. Just this past May, she helped to organize her class’s 60threunion. Her final words in her Wellesley class reunion book provide an apt summary of her active and empathetic approach to life: “my wish for us all is that we may enjoy blessed lives, and good health, and continue to contribute to shaping the good world.”

Martha was preceded in death by her parents, Paul and Ann Reardon; siblings Bobby Reardon and Jane Reardon Labys; and beloved husband, John A. Bewick.

Martha’s burial will be private, and a celebration of her wonderful life will be held in early September. In lieu of flowers, donations can be made to the Hingham Historical Commission Preservation Project Fund (a 501c3 organization), 210 Central Street, Hingham, MA 02043. Please designate the gift to be used for the Tranquility Grove Project.