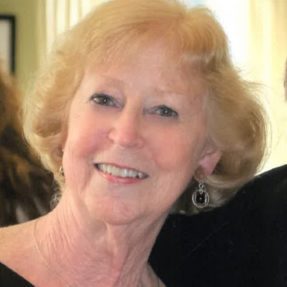 Born on September 2, 1941 in Boston and raised on Carmel Street on Mission Hill, she is the daughter of Eugene and Margaret (Cotter) Hayes, of County Cork, Ireland. Peg attended Mission Hill Church and graduated from Mission Hill High School. She met her husband, Jack, while working at General Motors. After a few moves, in 1974 they settled on Village Lane in Hingham where she spent the next 46 years. Family was the most important thing to Peg and she cherished her time with her children, grandchildren, siblings, in-laws and many nieces and nephews. She and Jack were proud to host an annual clambake for extended family and friends, still the source of many family stories. Peggy loved a good laugh and shared many with her dear friends. She was active in the Hingham Ladies Club, the Hingham Garden Club and volunteered for the VNA. Peggy was the beloved wife of John (Jack) Murray (deceased) with whom she shared 56 years of loving marriage. She was the devoted mother of Karen Bosworth and her husband Scott of Dorchester, Susan Swain and her husband Eric of Boxford, Kerrie Manley and her husband John of Hingham, and Patrick Murray and his wife Christine of Hull.

She was the loving grandmother of Benjamin, Emily, Michael, Sam, Jarrod, Tyler, Maggie, William, Mollie, Catherine and Erin. She was the dear sister-in-law of Phyllis Hayes of Canton, John Kelly of Duxbury, Maura Murray of Hingham, and Mary Jane Murray, of Merritt Island, FL and aunt to many loving nieces and nephews. She was preceded in death by her beloved siblings, Thomas Hayes, Mary Kelly and Virginia Burke.

Relatives and friends are respectfully invited to greet the family during the visiting hours on Wednesday 4-8 PM in the Pyne Keohane Funeral Home, 21 Emerald St. (off Central St.), HINGHAM. A Celebration of Life Service will be held in the funeral home at 9 AM on Thursday prior to the Funeral Mass in St. Paul’s Church, Hingham at 10 AM. Cremation will follow. In lieu of flowers, donations in memory of Peggy may be made to Pat Roche Hospice Home, 86 Turkey Hill Lane, Hingham, MA 02043.