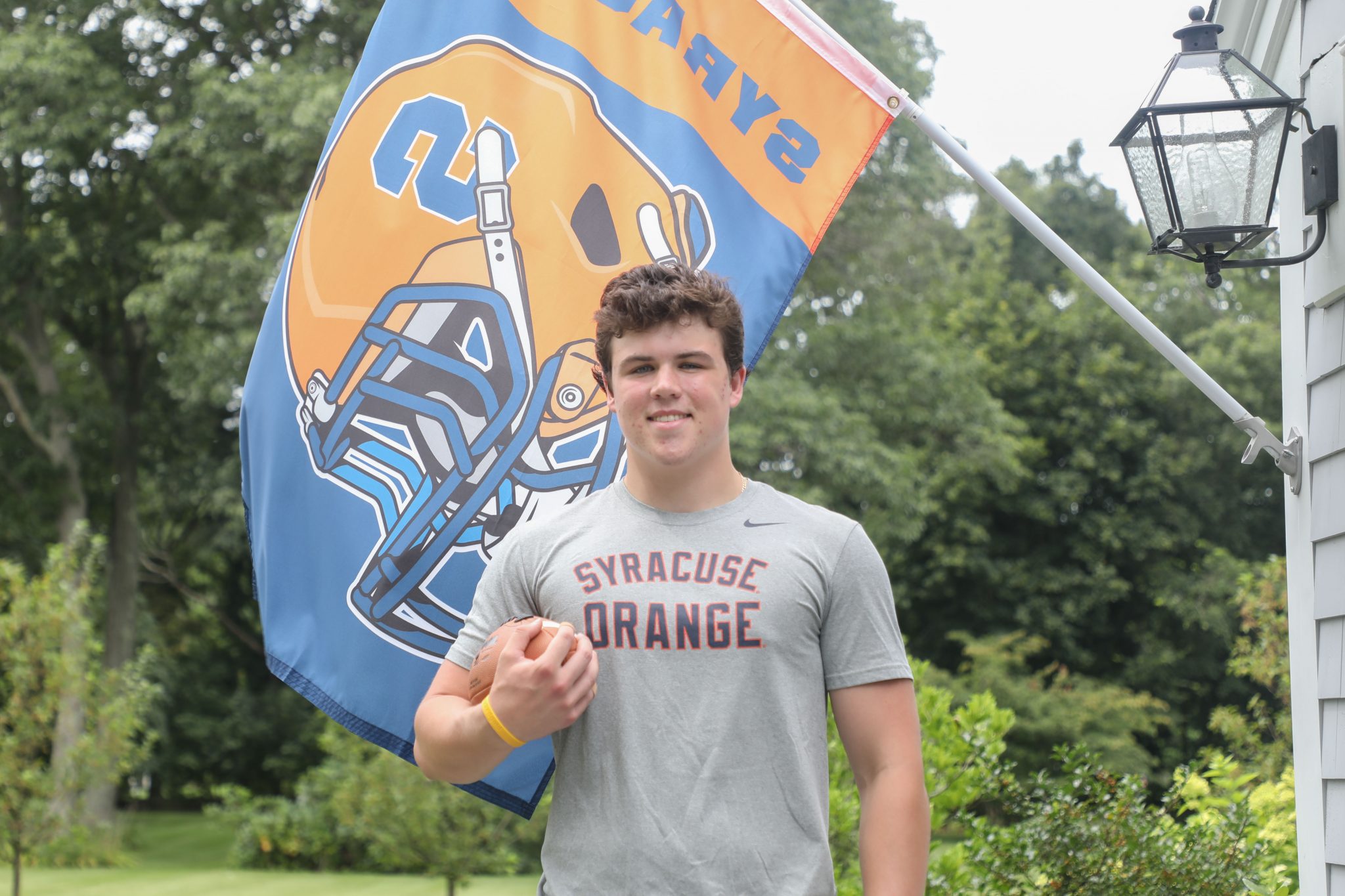 20/21 HHS football captain John O'Connor getting ready to head up to Syracuse to play for the Orange.

Before last Thursday, recent HHS graduate John O’Connor thought his playing days were over.  Like most of his classmates, the former football captain was getting ready to head off to their freshman year of college at the end of the month.  He didn’t receive any offers to play at the next level and hit some dead ends regarding walk-on opportunities.  Then the email came.

“Dear John, we would like to extend an invitation to you to join the 2021 (Syracuse) football program as a preferred walk-on.”

Just like that, John and his family needed to make plans to move up to Syracuse on August 4th instead of August 23rd.

“I think it’s going to be culture shock going from Hingham High School football to Syracuse football,” says the soft-spoken O’Connor.  “It’s going to be a huge jump, and I’m excited about the opportunity.”

While the final decision was down to the wire, the overall journey started a few years ago.  John and his mother Michele, a Syracuse alum, visited the school back in February 2020 as part of the typical college touring process.  He took one step in the Dome during the tour and knew he wanted to play for the Orange.

“I was just looking at schools for academic purposes,” O’Connor says.  “I really didn’t think I would be playing a sport in college until I visited the Dome.  I saw how great the Syracuse football program is, and I think it just took off from there.  It was kind of like a why not situation.  I wanted to see if I could really make the team or not, and I think I’m moving in the right direction so far."

There are approximately 85 scholarship players and 30 preferred walk-on players.  It also means if he does well, he could be offered a scholarship starting in his sophomore year, similar to another Hingham graduate Tim Shafter, former walk-on now scholarship player at Tulane University.

“I saw a kid who could be really good if he was pushed,” Milano tells the Anchor about first meeting him.  “The one thing I can say about John is that he has a motor that never stops running and you see he has a love for the game.  I was excited to coach him again (in high school).  This time I saw a young man who just needed a chance.  He’s a grinder, no matter how hard it gets, he never quits.  If Syracuse football gives him a chance, they won’t regret it.”

O’Connor will be majoring in Economics and says the things he’s most excited about is the weight room and meeting the coaches.  He did reflect on the craziness of the last 18 months, and he appreciates everything that happened to get him to this point, including getting to play a final season in Hingham.

“For my class of 2021, there was a lot of ups and downs of the season and for a whole year we didn’t play football,” O’Connor says. “I think we wanted the respect we all deserved.  I think moving forward I think everyone was satisfied that we were able to play a season.”

He is heading up the New York Thruway with real expectations and a lot of drive and determination but is welcoming the challenge.

“I have the mindset as I’m going in as a no one, but I want to be someone.  I think that if I keep staying on the track I am now, I will get to that point.  And I’m determined to be there.”