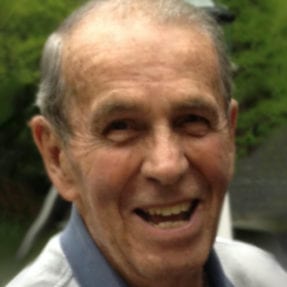 A life-long Hingham resident, Jack was an outstanding athlete at Hingham High School. He received numerous all-star accolades and earned 12 Varsity Letters playing football, baseball, basketball and hockey. He was inducted into the Hingham High School Athletic Hall of Fame in 2005. Jack and Carol were high school sweethearts who married in 1954 and remained lovingly devoted to each other for 67 years.

Jack was a hard-working man who often worked three jobs at a time to provide for his family. He was a Hingham Police Officer for 25 years and owner of Jack’s Country Store on Main Street. During his time on the police department, he proudly started the annual Hingham Senior Citizen Holiday Luncheon. Jack was well-known throughout Hingham’s youth sports programs. He coached many Little League baseball, Pop Warner Football and John Barker basketball teams. He and his brother Ed brought the Pop Warner Football program to Hingham and coached together for many years. Golf became a big part of Jack’s life. He was an avid golfer, who won many championship golf tournaments and was a long-time member of South Shore Country Club and Hatherly Country Club in Scituate. After retirement Jack turned his hobby of golf into a successful golf club repair business. He became a certified clubmaker through Golfsmith. Jack attended various training facilities offered within the golf club manufacturers industry. This allowed him to create individualized clubs for golfers of all levels. With his strong work ethic and “gift of gab,” he established Jack’s Clubhouse and made, sold and repaired golf clubs for golfers across the south shore. Jack always enjoyed talking with his customers and teaching them about the club-making business. He was named Golfsmith’s East Coast clubmaker of the year numerous times.

Through the years he enjoyed many visits to the White Mountains of NH with family and friends, as well as golf getaways to Florida and Ireland. Jack was happiest when surrounded by family and friends at holiday gatherings, family celebrations and the Hingham 4th of July parade and fireworks. Family and friends were drawn to his vibrant personality and quick-witted sense of humor. Jack’s proudest accomplishments were his love and commitment to his wife Carol, the love and support for his children and the joy of his grandchildren and great grandchildren who lovingly refer to him as “Banky.” Jack was a tireless man and the pillar of strength for his family. No words can explain how much he will be missed, but we can take comfort knowing he lived a full life and did it “Jack’s way."

Relatives and friends are respectfully invited to greet the family during visiting hours Tuesday 4-8 PM in the Pyne Keohane Funeral Home, 21 Emerald Street (off Central St.), HINGHAM. A Celebration of Life service will be held on Wednesday at 11 AM in Pyne Keohane Funeral Home, Hingham. Burial in High Street Cemetery, Hingham. In lieu of flowers, donations in memory of Jack may be made to the American Parkinson’s Disease – Mass Chapter, 72 East Concord Street, Boston, MA  02118. A proud Korean War U.S. Army Veteran.