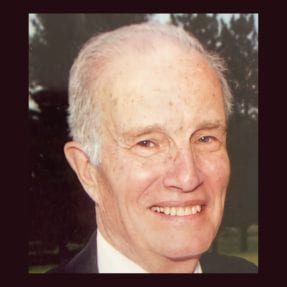 He was one of five boys raised by a single mother during the Depression. His resilient, can-do attitude led him to join the Navy and ultimately graduate from the Naval Academy. He spent 30 years as a career officer, first flying planes as a hurricane hunter and later in a squadron that flew secret missions from Hawaii and Japan. He met the love of his life, Ellen Dickinson, when stationed in Florida in 1949. They had 65 wonderful years together and raised three daughters. After settling in Acton, MA, John’s last tour of duty was as head of the NROTC at Tufts University. This allowed John to earn a Masters in Education which he turned into a second career as a beloved guidance counselor at Assabet Valley Regional Technical School. John loved mentoring students and helping them find their career path.

In their later years, John and Ellen could be found welcoming new residents to their retirement community at Linden Ponds in Hingham, MA, where John was active for most of his 16 years. He will be remembered by family, friends and aides for his positive outlook, dry wit, and ability to carry a tune when whistling or humming.

A private burial will take place at Bourne Cemetery. In lieu of flowers, those wishing to may donate to the Pat Roche Hospice Home, 86 Turkey Hill Lane, Hingham, MA 02043.