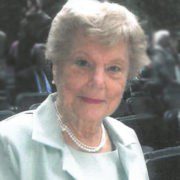 Born in East Orange, NJ, she attended East Orange High School. A resident of Livingston, NJ for nearly 50 years, she married Ed Roberts in 1950 and together they were blessed with three children. Janet and Ed retired to the Cape in 1995 and, after his death in 2006, Janet became a resident of Linden Ponds in Hingham, MA. It was at Linden Ponds that Janet and her longtime friend, Jim Eastman, became dedicated partners.

She is survived by her children, Charles Roberts and his wife Anita, of Manlius, NY, Thomas Roberts and his wife Yoonhee, of Ridgewood, NJ, and Nancy Roberts Craven and her husband Joe, of Hingham, MA; her aforementioned partner, James Eastman, of Hingham, MA; eight grandchildren; two great-grandchildren; many relatives and friends, all of whom she held in deep affection.

Janet was a proud daughter of Scottish and English immigrants, and humbly cherished the opportunity to serve her country, often regaling her grandchildren with stories from her time working on radar production at Westinghouse during World War II. Intellectually gifted, Janet graduated high school at age 16 to support her mother and brother after her father's early death, yet she remained a life-long student of history, a constant learner, and avid reader – with interests ranging from Russian and American history to that of her Scottish and English ancestral homelands. A dedicated community servant, among her many civic leadership positions, Janet served as the Clerk of Session for the Presbyterian Church of Livingston.

Janet was most happy surrounded by her friends and family, reminiscing of her famous Livingston Book Club and long afternoons on Cape Cod, usually over an evening Manhattan; holding court with her wickedly dry Scottish wit; and assuming her familiar role of matriarch of her beloved family during the Holidays. She always remained most proud of her grandchildren and great grandchildren, Jeff, Andrew, J.P., Deirdre, Conor, Brian, Harry, Jason, Ryan and Benjamin, telling anyone who would listen of their most recent exploits, often with a newspaper clipping in-hand.

She will be missed dearly by many.

A celebration of Janet's life will be held on Sunday, September 19th at 2:00 p.m. at Linden Ponds (in the Performing Arts Center or PAC), which is on the lower level of the Derby Clubhouse, 300 Linden Ponds Way, Hingham, MA. She will be laid to her final resting place at the Presbyterian Church of Livingston in New Jersey, alongside her husband, Ed.

In lieu of flowers, donations may be made to the Janet Burt Anderson First Generation Internship Fund which supports first generation college students in their career endeavors, established to acknowledge the contributions of both Janet and her beloved mother at Davidson College, Box 7170, Davidson, NC 28035.