Hundreds of Hingham families, individuals, and businesses will display the Philadelphia Rainbow Pride Flag or Hingham Pride static window clings throughout June -- LGBT Pride Month -- in a show of support for Hingham's LGBTQ+ community and the Hingham Pride Project.

This non-profit works to increase LGBTQ+ visibility in Hingham, to raise funds for organizations that provide community programs and activities for LGBTQ+  youth, and to promote inclusivity among residents of all ages through community activities and education.

"More than 600 people have ordered the Philadelphia Pride flag and window clings, and we've sold 83 of the custom 'H' [for 'Hingham' Pride] flags," said Alyssa DeCourcey -- who spearheaded the project and is part of the volunteer Hingham Pride Project board. "There's plenty of everything left for those who would still like to place an order."

There is no charge for the Philadelphia flags. (See ordering information below for both.)

For Hingham resident Liam Keliher, a 2020 Hingham High School graduate, there couldn't be a better time to raise awareness than during Pride Month.

When he "came out" during high school, his parents and friends were supportive. More recently, Liam said he feels encouraged by the participation of so many Hingham families and businesses in hanging Pride flags and window clings.

When he and some other gay friends were badgered by a group of younger teens at World's End last week, Liam said  he felt only "a little upset, because I know who I am and am happy with that, and so are my friends." However, not everyone would feel that way, which concerns him.

"These kids were calling me 'queen' and mocking me, and murmuring about me and my appearance, and then they were laughing," he recalled. "When I told them, 'Seriously, stop, this isn't funny,' they laughed it off and resumed their mocking, even when we said we felt uncomfortable."

When Liam and his friends moved to another spot, the younger boys followed them and continued to make derogatory comments. This behavior took place over 2-1/2 to three hours.

While Liam tried not to let the incident get to him,  he still felt sad, thinking about students at the Middle School who are gay and "don't yet feel comfortable with who they are and have a sense of uncertainty about themselves. I started questioning who I was at that age."

Liam said seeing the flags and clings that are already on display makes him happy. "When I was younger, I really didn't experience much support in town for the gay community. There was no obvious opposition, but there was nothing that let me know that I was in a safe place." 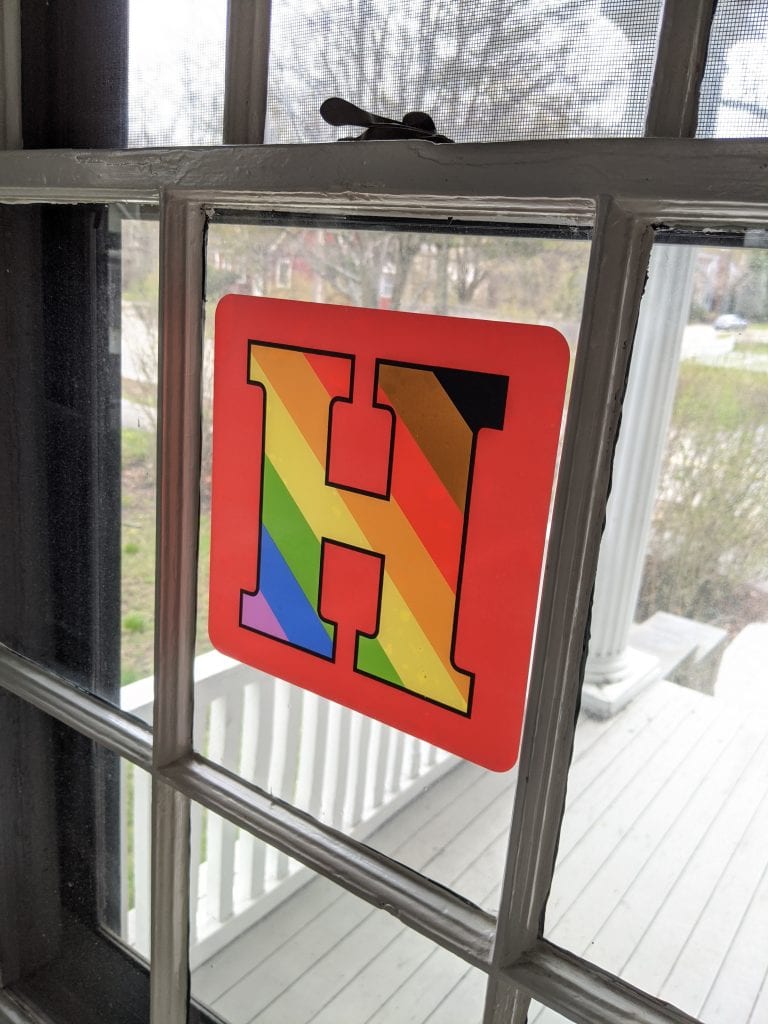 "This displaying of flags and window clings shows we are accepted and that this is what our community is like," he said. "This show of support, especially during a pandemic, is really great."

Especially following last week's incident at World's End, Liam would like to see parents have a conversation with their children about the importance of accepting diversity -- "to let their kids know they shouldn't ostracize people who act differently  -- for instance, a boy who expresses feminine qualities. And to encourage them to be understanding, and not to bully and pick on those who are different from them."

Tim Miller-Dempsey -- whose husband, Daniel, is part of the Hingham Pride Project -- also supports the effort and the Pride Month display of flags and window clings in town.

"This isn't about making yourself feel good by flying a rainbow flag, but about helping [members of Hingham's LGBTQ+ community] feel safe when they see the flags blanketing the town," he said. "I want to feel safe, and the same for my family, [including his two sons], physically and emotionally and in every way. It's important to know that you're not disrespected because you're gay. Seeing my church fly the rainbow flag makes me feel safe and welcome."

Still, Miller-Dempsey said what happened to Liam -- which he read about on Liam's facebook post -- is not unusual, even here in town.

"HIngham is a great community, and I'm very proud to raise my family here, but it's not a utopia free of homophobia," he said. "It's not just about understanding that there are different orientations, but about really getting to know your neighbors, not just a surface attempt. That's when prejudice and discrimination break down, because it's hard to discriminate against people you know and care about. I wouldn't be the person I am today if I was born straight."

For Dempsey, Pride Month presents an opportunity for the LGBTQ+ community "to celebrate who we are and for the allied community to let us know that they have our backs. The Hingham Pride Project is a really nice start."

It's not too late to sign up for free 3-foot by 5-foot flags for your home or business. Flags will be delivered as soon as possible and picked up by the end of the first weekend in July.

For those who don't have a place to display a flag, static window clings are available. They are also free and come in two sizes (8-inch by 8-inch for houses and 4-inch by 4-inch for businesses).

For those wishing to show their pride in both the Hingham and the LGBTQ+ community year-round, custom-made 'H' flags with a rainbow filling in the 'H' are available for purchase.

Each one of these $50 flag purchases supports the free flags and clings, which are available upon request.

The sign-up form for the flags and clings, along with information about the Hingham Pride Project may be found at www.hinghamprideproject.com.

*Editors’ note:  Currently there is a petition with over 5,800 signatures showing support from the community to have the Pride flag flown at Town Hall this year.