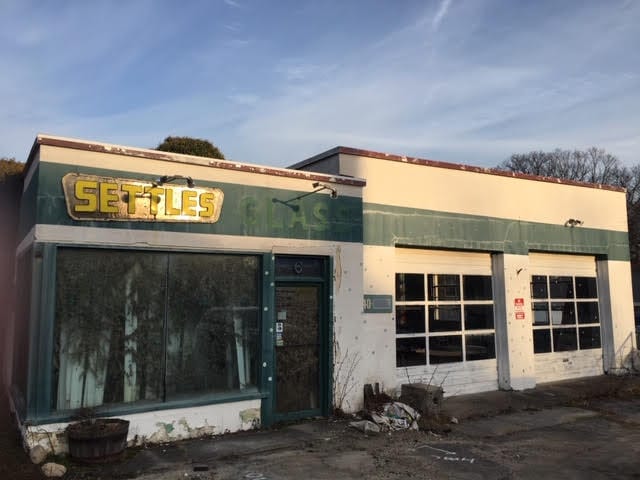 The overgrown lot and rundown former Settles Glass building at the intersection of North and Station streets in downtown Hingham is not a pretty sight.

But there’s hope. Local developer Matt Falconeiri (whose company is constructing the Lincoln Building replica in Hingham Square) has plans to build a three-story residential/retail building at that location, pending final approval from the town — which might be just around the corner. Hingham Architect Vcevy Strekalovsky is designing the project.

The Planning Board approved the site plan Jan. 28 in joint session with the zoning board of appeals.  The ZBA continued its hearing to Wednesday, Feb. 6, at 6 pm. It’s likely the board will make its decision on whether to approve the plan or not that evening.

Two earlier proposals for a biergarten, and years later a mix of residential and commercial units for this site never happened.

Once home to the glass company and later a funky art studio, the latest mixed-use proposal is on a smaller scale than the most recent one that was denied.

“It’s an unusual site, but it’s vital to connecting the downtown area to the harbor and to increase the vitality of downtown Hingham,” Strekalovsky said earlier. “This is an attempt to fit in with the varied buildings in the surrounding area.”