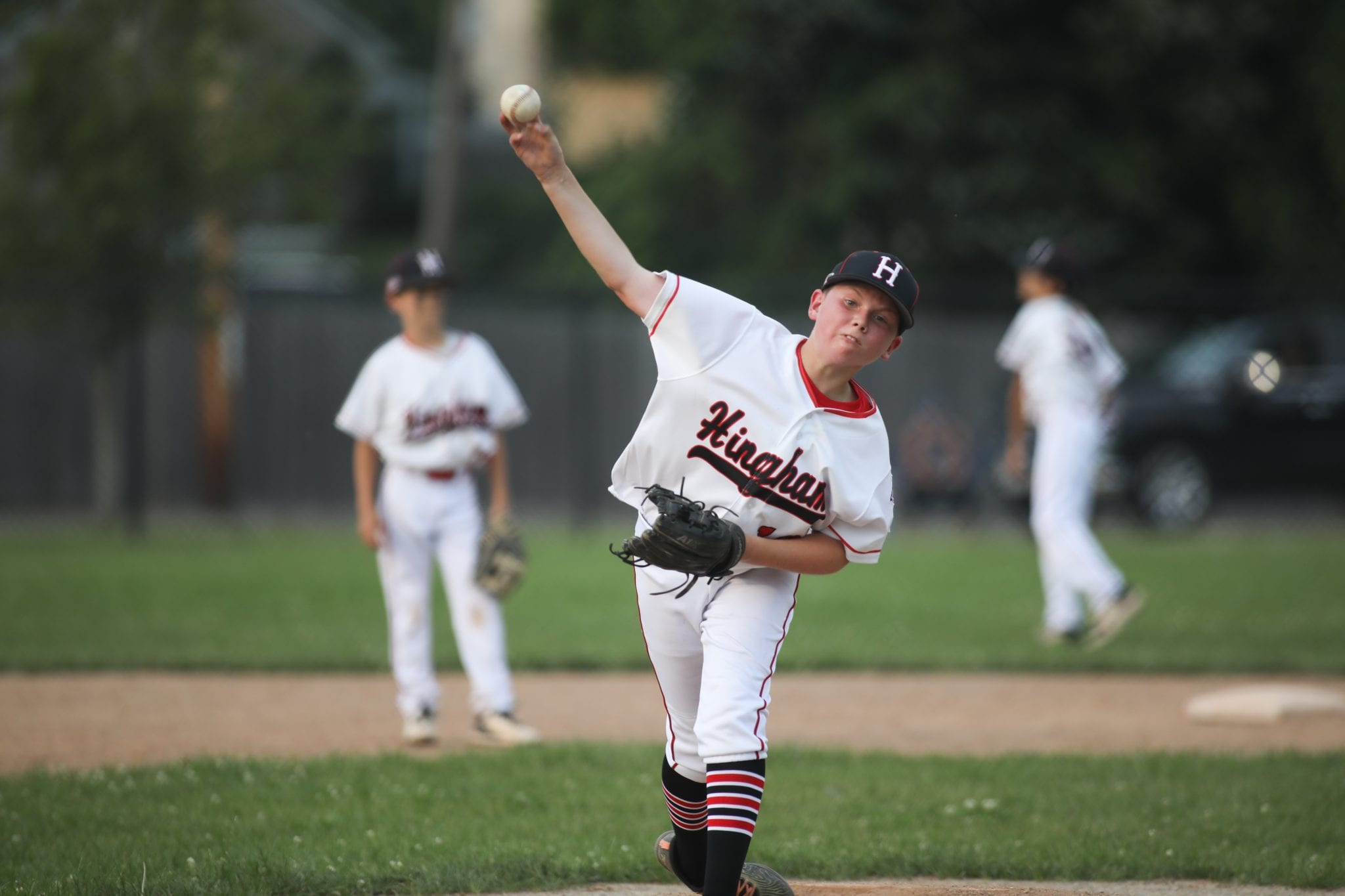 Grayson Bohane threw a complete game in the fourth and final pool game on Wednesday night.

This year’s 12 Williamsport Tournament team is off to an outstanding start in their long journey to the Little League World Series.  The boys, who play in District 8, have started 4-0 in pool play and is the top seed in their pool.  In those four games, the run differential was 34-2.  Four pitchers Dan Nichols, Will Jones, Jack Serafini and Grayson Bohane all tossed complete games.  Nichols started game #1 with a 2 hit shutout (12Ks - 1BB) vs Hanover in a 8-0 win.  In game #2, Jones led the way with a 1 hit, 9-0 shutout of Milton National.  Serafini got the win 12 - 1 in game #3 vs Scituate, scattering 5 hits over 5 innings.  Bohane, who had an immaculate inning (9 pitches, 9 strikes, 3 strike outs), closed out pool play in game #4 with another win over Scituate 6-1.

Behind these outstanding pitching performances there has been solid defensive support.  CJ Taylor and Thomas Sullivan have been rock solid catching and calling pitches in all four games.  Outfield play is super important in Williamsport play and Hingham’s defense is led by Charlie Levy in CF and when not pitching Serafini, Jones and Nichols splitting duties in LF and RF.  The infield is led by Bohane and Mathew Volpe at SS and Brendan McCarthy and Cole Snowden at 2B.  Each pair has turned double plays in this round and have provided solid defense up the middle.  At the corners Hingham has Rudy Preziosi at 1B and a platoon of Michael Blanchard as well as Taylor and Sullivan at 3B.

While pitching and defense win ball games, this 12U team has some offensive firepower spread across all 13 players.  The team has scored 34 runs over the four games and has an impressive batting average of .371.  Three players have Home Runs, with one each from Nichols, Jones and Preziosi.  Four hitters are hitting .500 or better, including Sullivan (.545), McCarthy, Serafini and Paul Donahue all at (.500).   Sullivan and Preziosi lead the team in RBIs with 6 each but contributions to offensive output come from each individual player on the squad.

Head coach Chris Taylor tells the Anchor how this team is different than teams in years past.

“The depth - really there’s not a big difference from players 1 through 13,” Taylor says.  “And the depth we have on this team, these boys can all play.  It’s something we are certainly excited about.”

Coach Taylor, along with assistant coaches Chris Bohane, Howie Levy and Bill McCarthy are coaching a team of all-stars with some higher than normal expectations.

“I would say the one area that everyone’s strong is that everyone can pitch and everyone can hit” Taylor goes on to say.  “Each of these boys was the central point for their little league teams and I think the hardest part is to get these boys out of the mode that everyone is not going to be batting third and playing shortstop.  I think it’s more so that everyone buy into the team mentality.”

Through the first four games, the results speak for themselves.  It’s clear that the talent and mindset are in place on this team for a potential long run through the pinnacle Little League tournament.

“We’ve be talking about a one team pull,” explains Taylor.  “We see it as one wheel with 13 spokes.  Nobody more important than the other.  And all of our boys have really bought into that.  One thing I did say that I’ve seen in all my years of coaching, it’s very rare to have a team that’s so talented and where all the boys really get along.  That’s a rare thing in sports in general.  And this is one of those team.  Win or lose, these boys do it together.  That’s a real pleasure to coach.”

The 12U team moves on to the knock-out round of the District 8 tournament next Monday 7/12 at Hollingsworth Park in Braintree at 6:00 PM.  The semi-final games will be on Wednesday and the Championship on Friday.  Section Play begins on Tuesday, July 20th at District 6.

“Baseball is a tough game and anything can happen,” Taylor concludes.  “I think we are preaching if everyone focuses on the little things and being great teammates, our chances are better than not.  Everybody realizes that whatever we do, we do it as one team.  This team is a pleasure to be around." 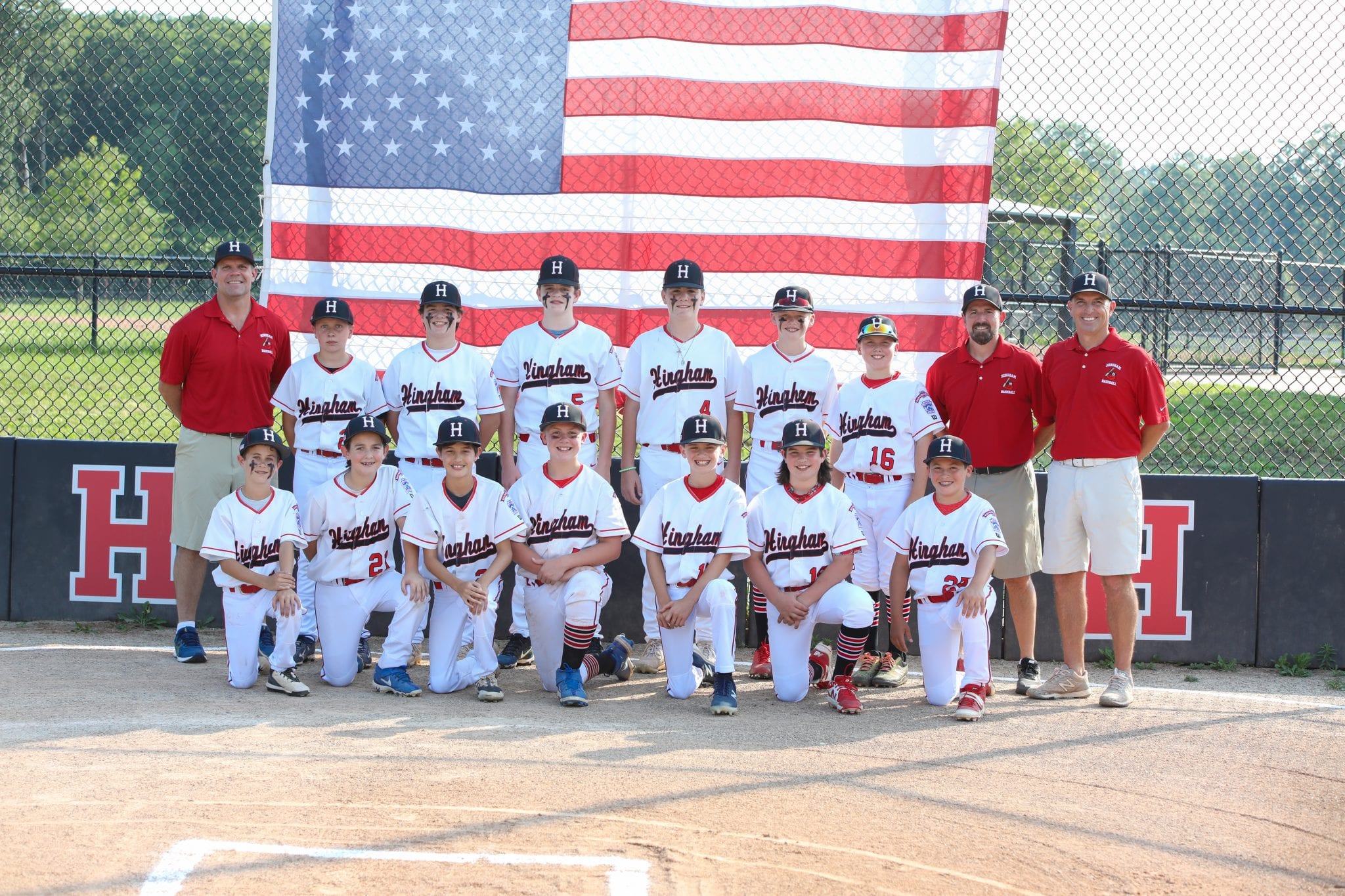 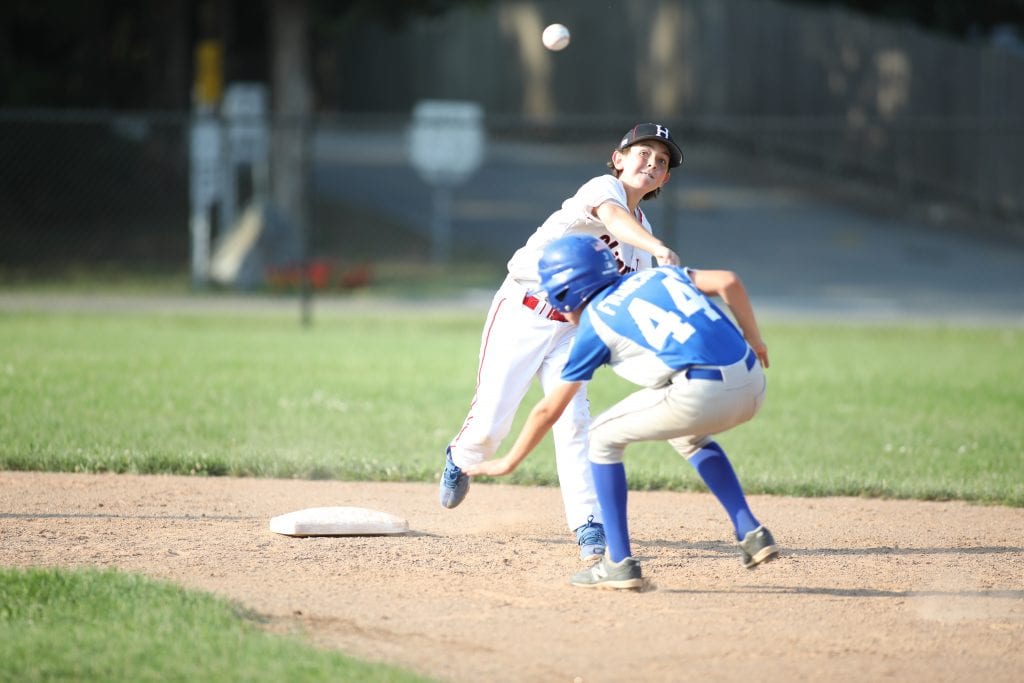 Cole Snowden attempts the double play in the first inning. 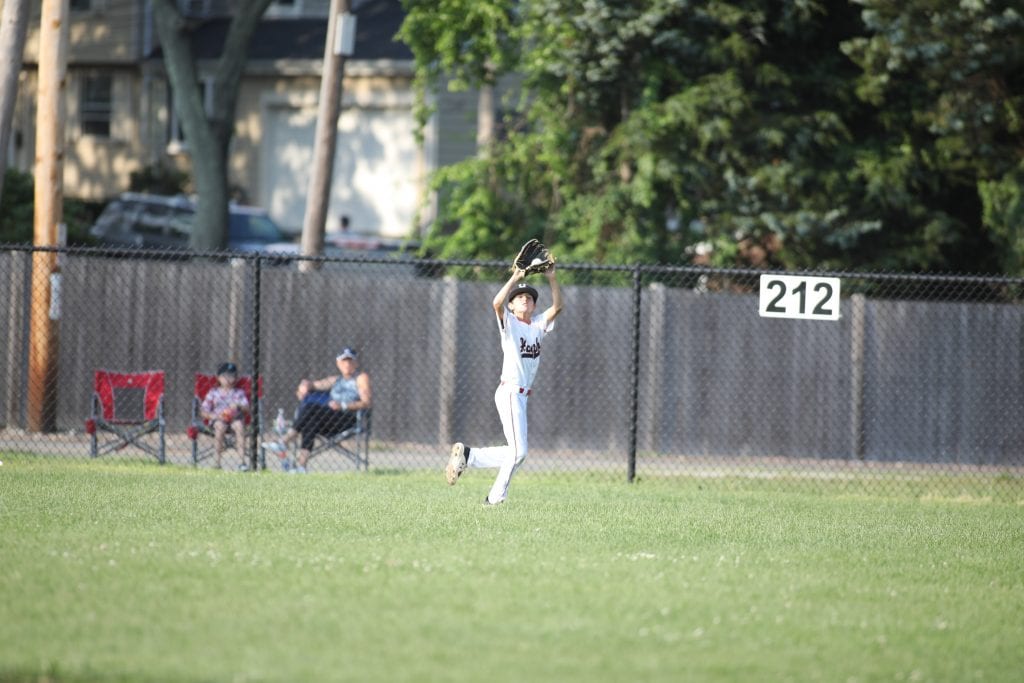 Centerfielder Charlie Levy makes the catch early in the game. 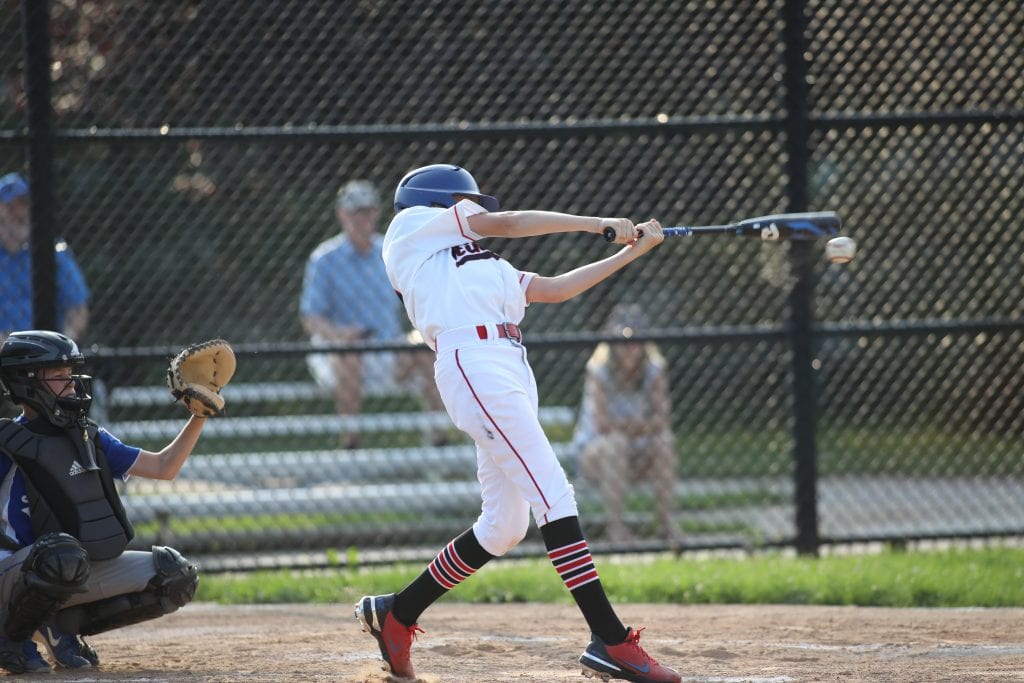 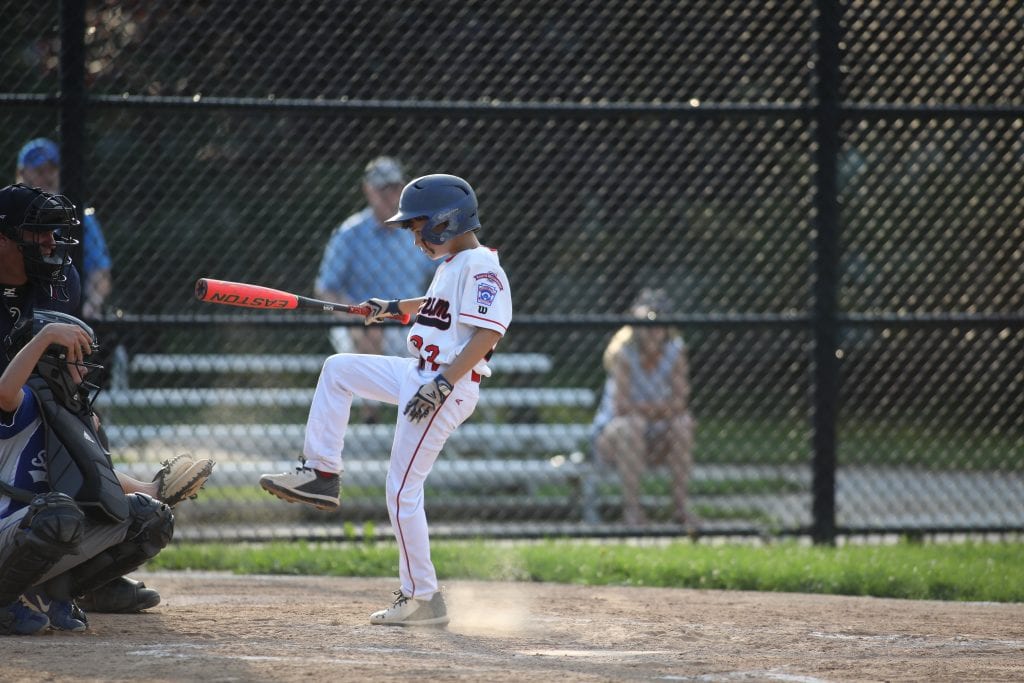 Matthew Volpe tries to avoid getting hit by a pitch. 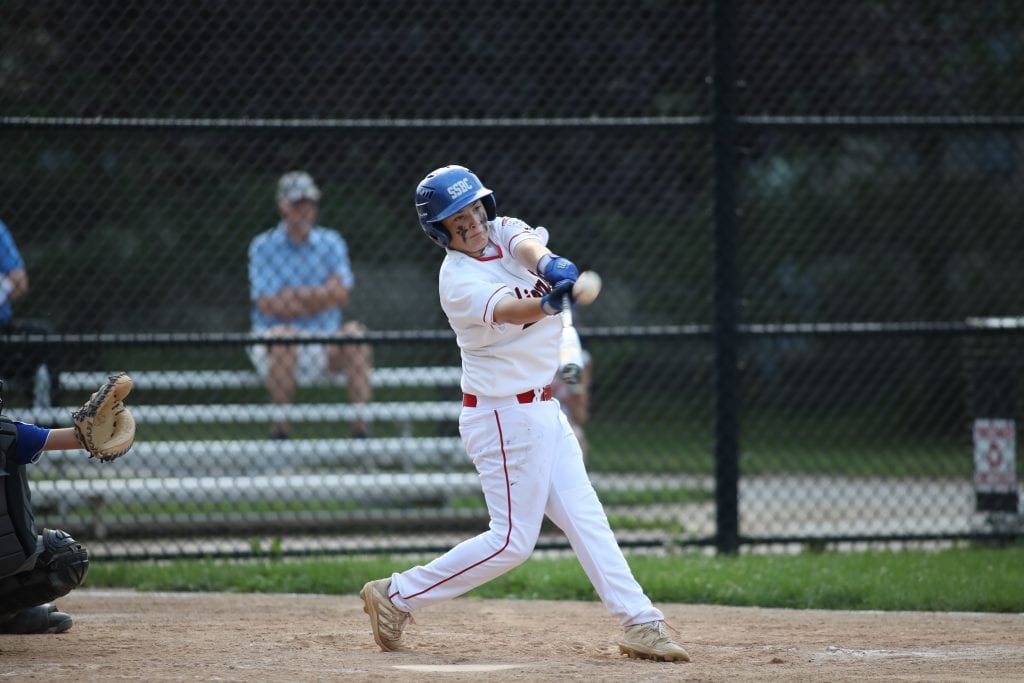 Rudy Preziosi is always a threat at the plate. 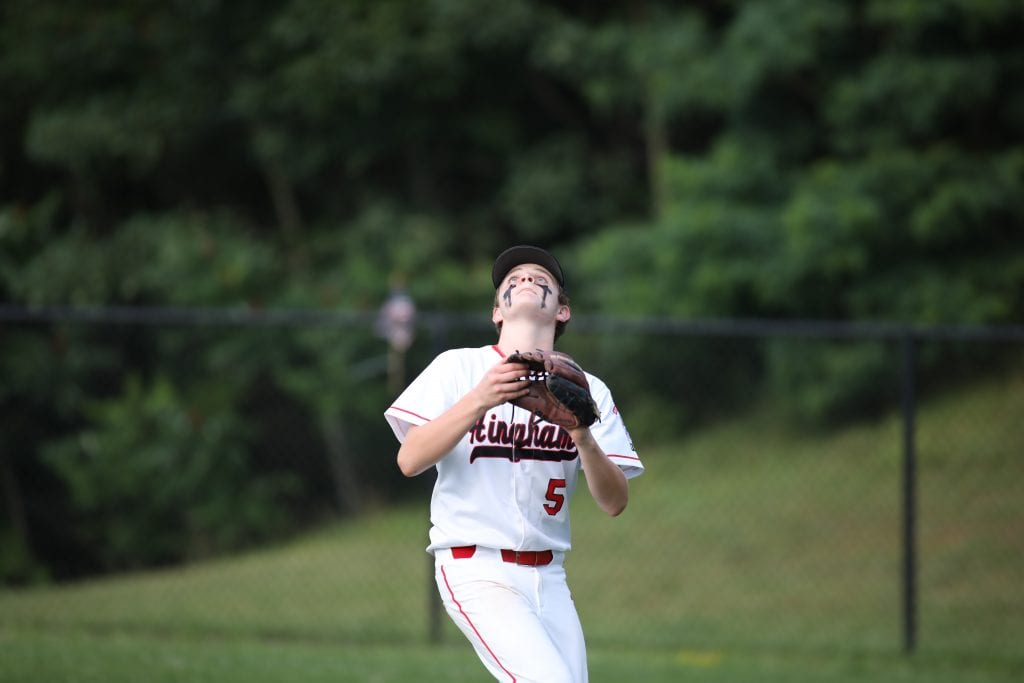 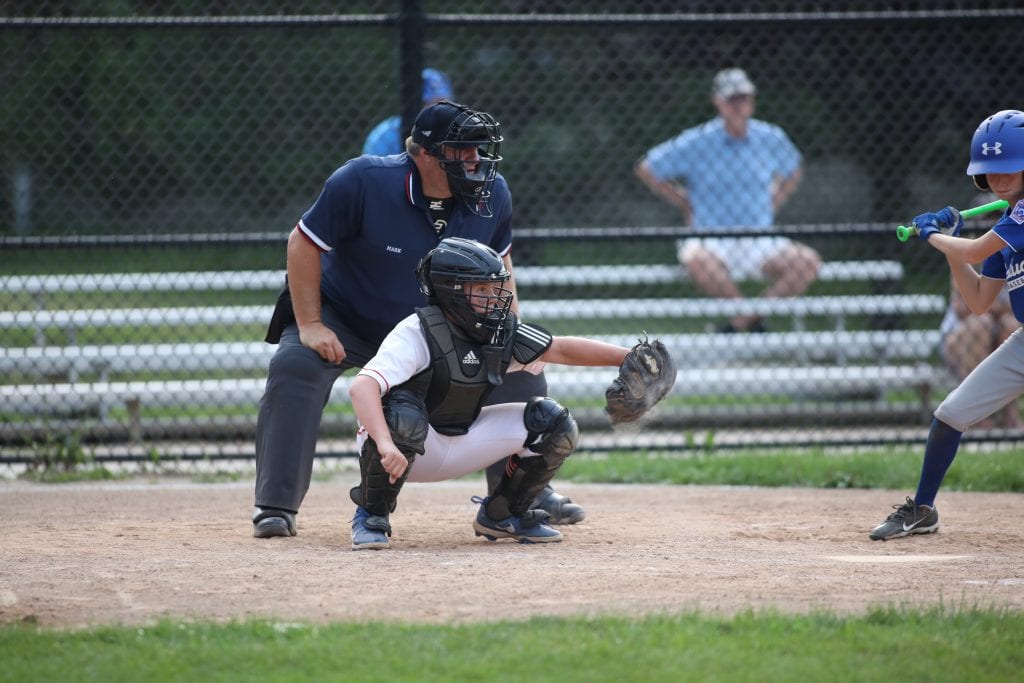 Catcher CJ Taylor was solid behind the plate. 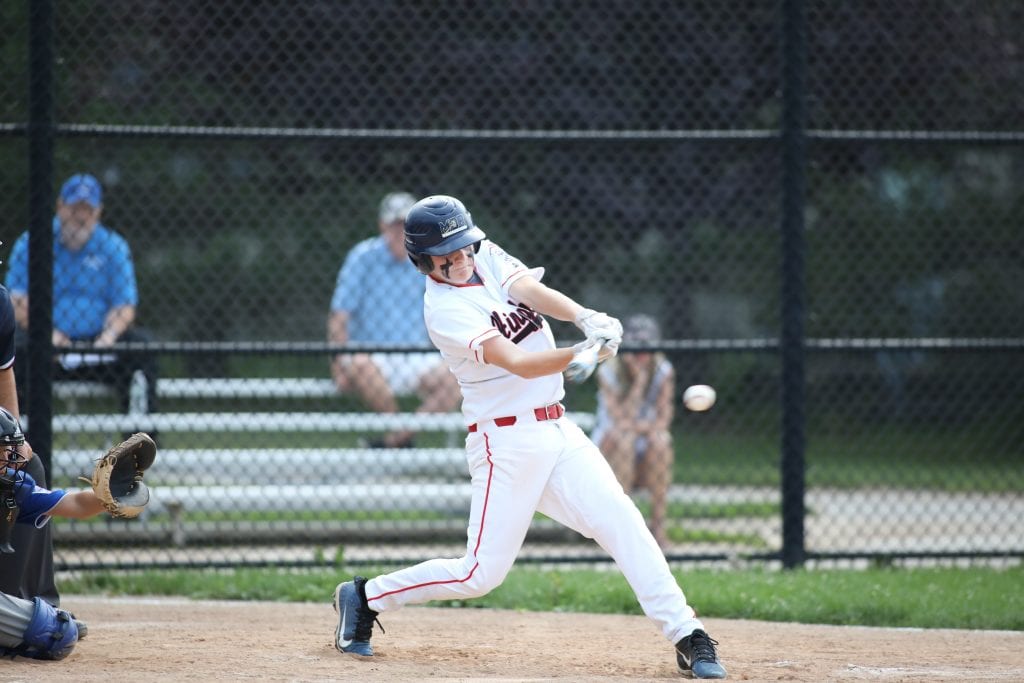 Dan Nichols smacks a base hit. 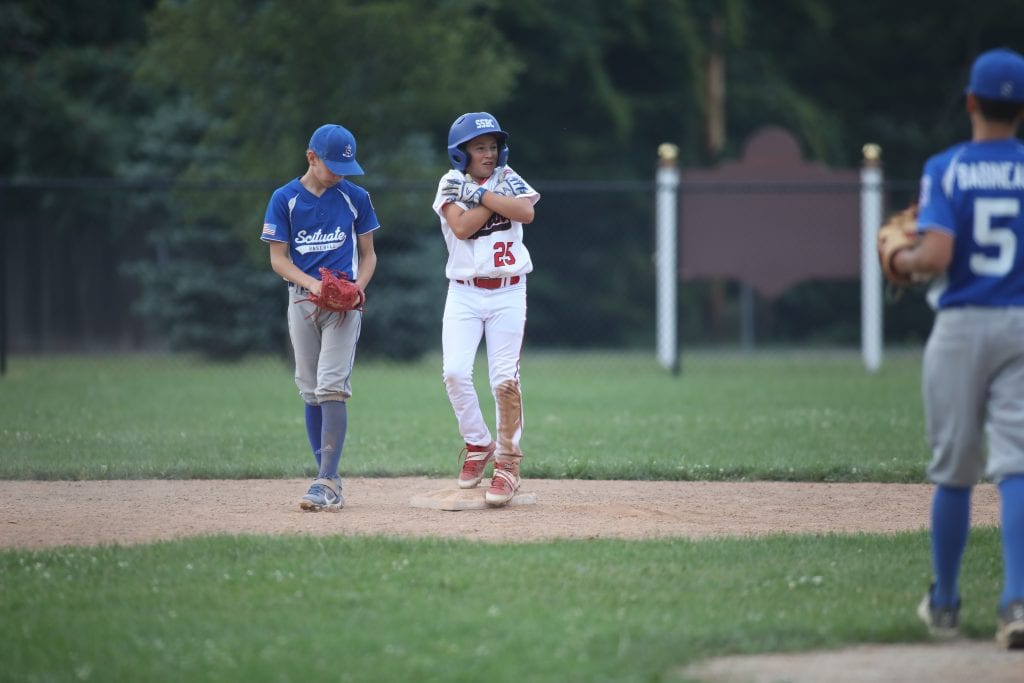 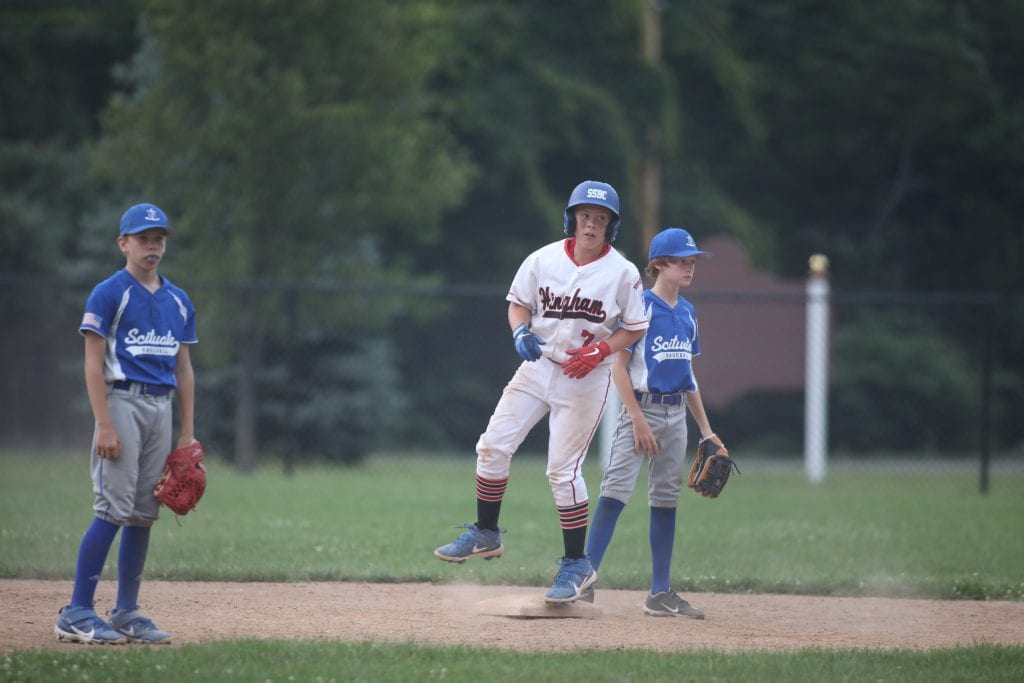 CJ Taylor save on second. 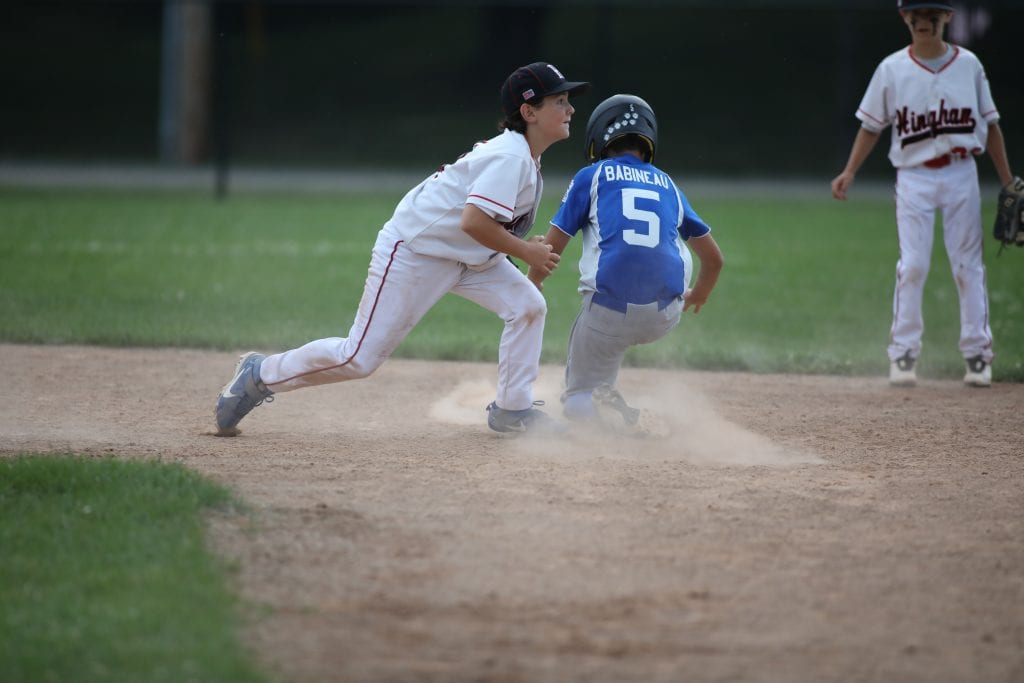 Cole Snowden with the tag on the runner.