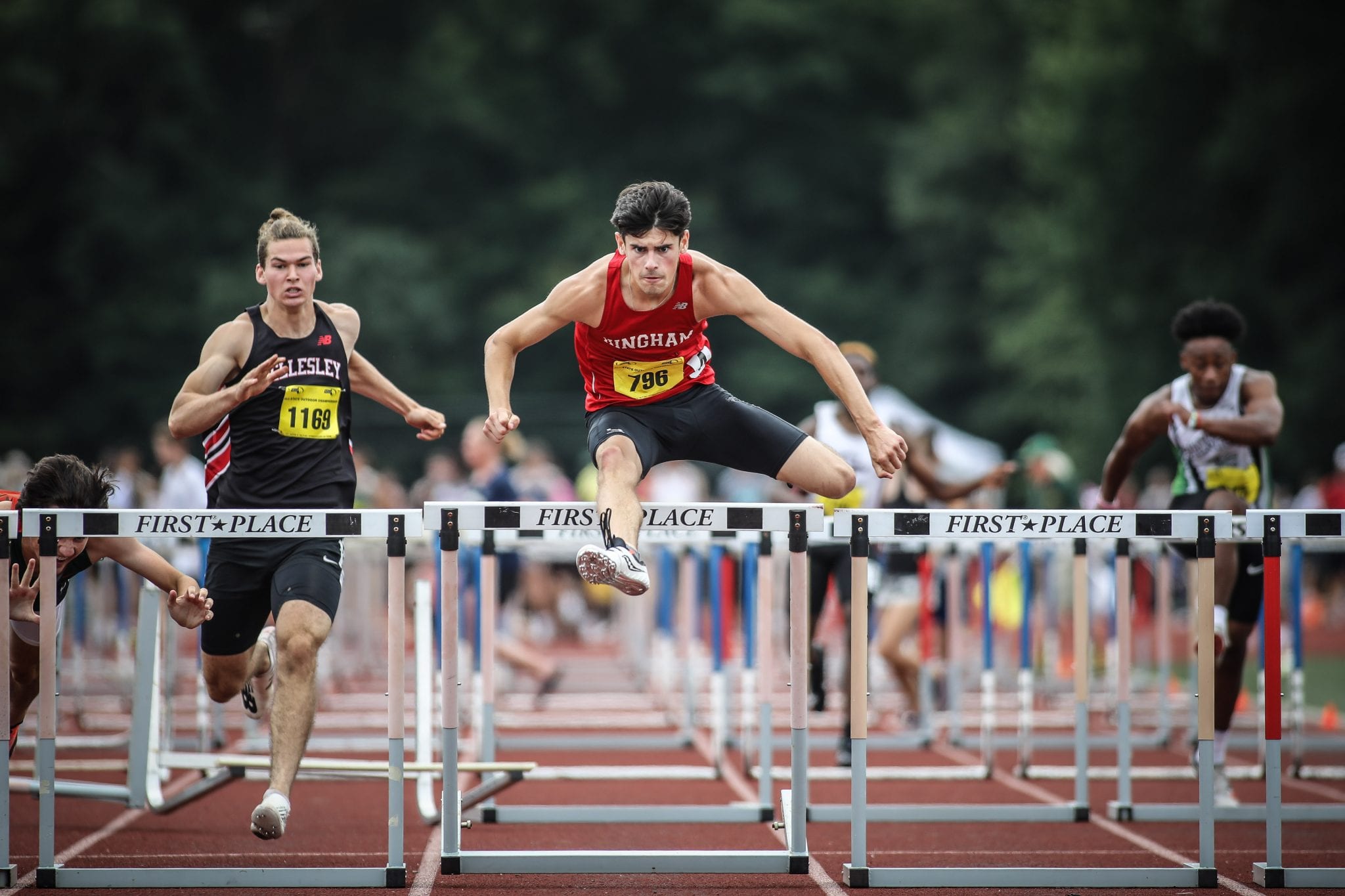 Senior captain Brian Fennelly finished 4th in States and qualified for Nationals in Oregon this weekend.

In a strange turn of events before the State Meet on Saturday morning,  the boys track and field team was named the winners of the South Sectional Finals that took place the previous weekend.  An error in recording the jump of junior Tom Shetzline in the triple jump was corrected giving Hingham the D1 South Championship over Weymouth.

Already coming off extremely successfully seasons for both girls and boys, the teams entered the weekend’s meet against the best in the state.  They both had competitors in 5 events.  The competition began on Thursday with the 1mile and 4 x 800 for the girls.  Senior captain Pria Parker finished 7th in the State in the mile and the relay team finished 8th.

The boys started the day on Saturday with the high jump, where senior Hayden Bromley and junior Avery Warshaw tied for 4th place with a height of 6’4”.  Next up was the finals of the 400m hurdles.  Senior captain Sean McKay captured third place and Shetzline finished 12th.  Senior captain Brian Fennelly easily qualified for the finals in the 110m hurdles where he finished fourth overall.  The two relay teams, 4 x 100 and 4 x 400, finished 8th and 16th respectively.

The boys ended up placing 8th out of 80 teams in the state.

“This has been an amazing year for the Hingham boys Track team,” says boys Head Coach Fred Jewett.  “We have fought through uncertainty, the fear of covid, running w masks on, helping each other through the changes, finding ways to stay positive and build teamwork in the midst of a pandemic. Everything changed and we adapted and made it work.”

Jewett credits a lot of his team’s success to the leadership of his seniors, especially his captains.

“Open communication and super captain leadership made everything possible,” he goes onto to say. “Kevin Ierardi, Sean McKay and Brian Fennelly were captains for 14 months. They never lost hope and drove though tremendous odds just to practice. To end up up MIAA D1 Champions as a D2 school is amazing. We came back from injury and all the other obstacles and stepped up and won.”

One of those senior captains, Brian Fennelly, is not quite done with his season yet.  Fennelly qualified at Sectionals to compete this upcoming weekend in Oregon at Nationals.

The commitment and dedication by not only Fennelly and the captains, but the entire team certainly paid off when it counted the most this year.

“I don’t know other towns were doing (during the pandemic), but we were in Wompatuck (State Park) every single day,” Fennelly explains. “I bought hurdles online and was hurdling in my street.  We didn’t even know if we were going to have a season, but Sean (McKay), Kevin Ierardi and I we just told as many kids to come to Wompatuck with us starting in March when COVID was hitting.  For a year straight, we were off season training ridiculously.  It was workouts every single day and because we had no meets to prep for and didn’t even know if we were going have a season, we were just thinking lets go really hard right now and if we have a season we will be in tip-top shape.  When given the opportunity, it was like a blessing in disguise.  You never have a full year to just go all out training.  I can guarantee you if we just had a normal off season, we would have not gone that hard and been in this position.”

And that position for Fennelly one of three runners representing Massachusetts in the 110m hurdles in Eugene, Oregon this weekend.

“I never thought this would happen,” Fennelly admits. “I just squeezed in under that 14.5 (at Sectionals), but it feels great to be one of three kids representing Massachusetts.  I feel really honored to be wearing that Hingham uniform over and over again.”

A few hours after the boys finished up their meet, the girls took to the field as senior Olivia Spielberger finished 10th.  Sophomore Kelsey Tarby and Margaret Lowther finished 8th and 19th respectively in the 400m.  And sophomore Emma Mills competed in the 100m hurdles.

The girls finished a respectable 53rd out of 81 teams. 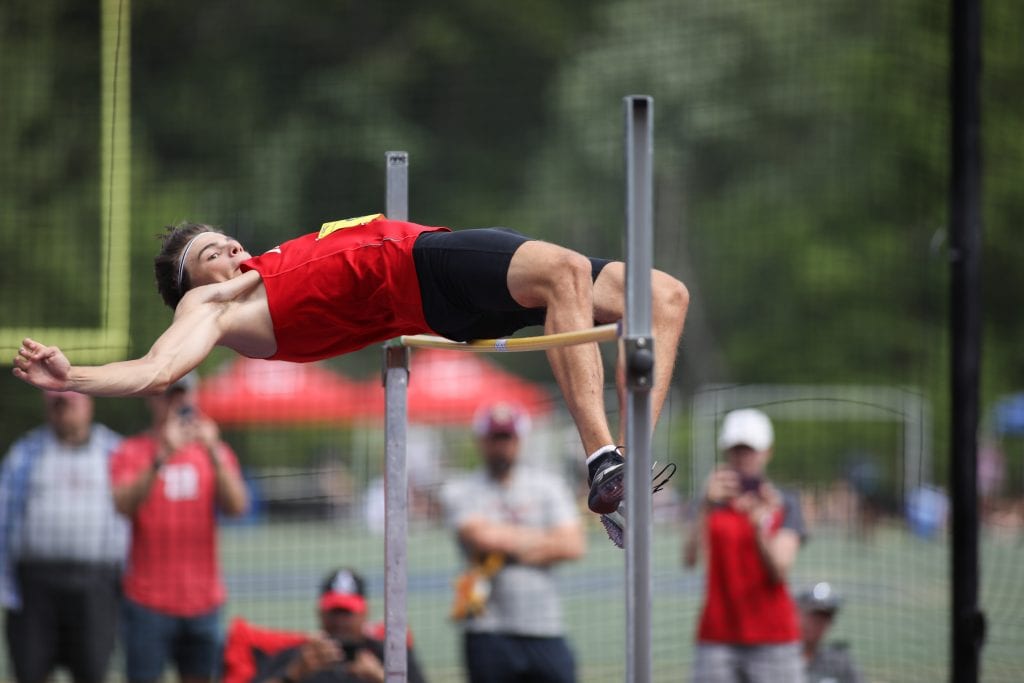 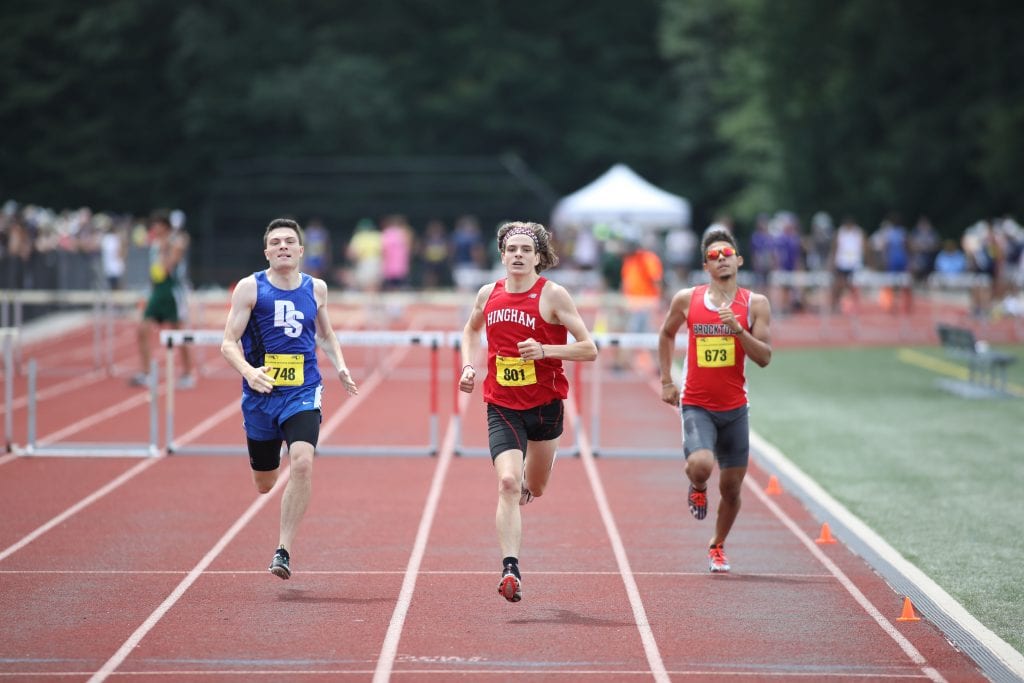 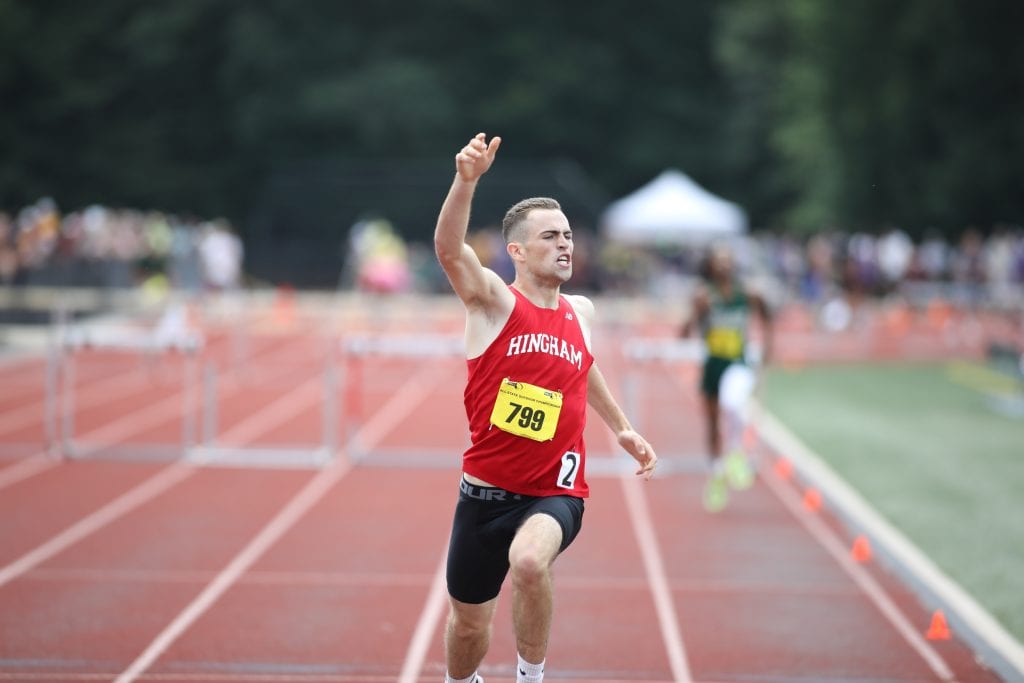 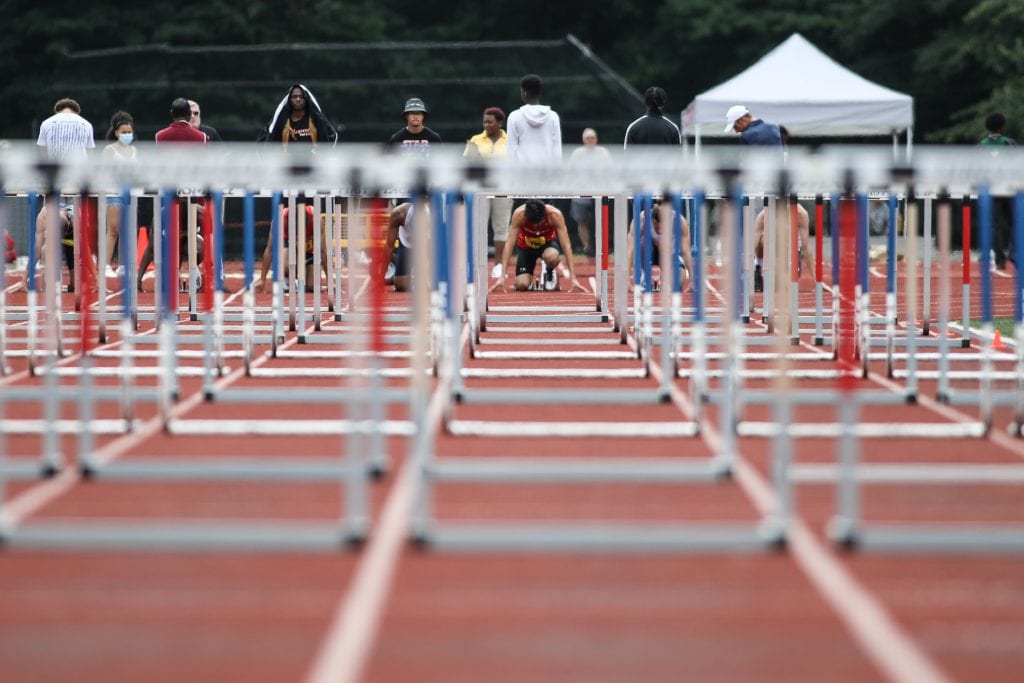 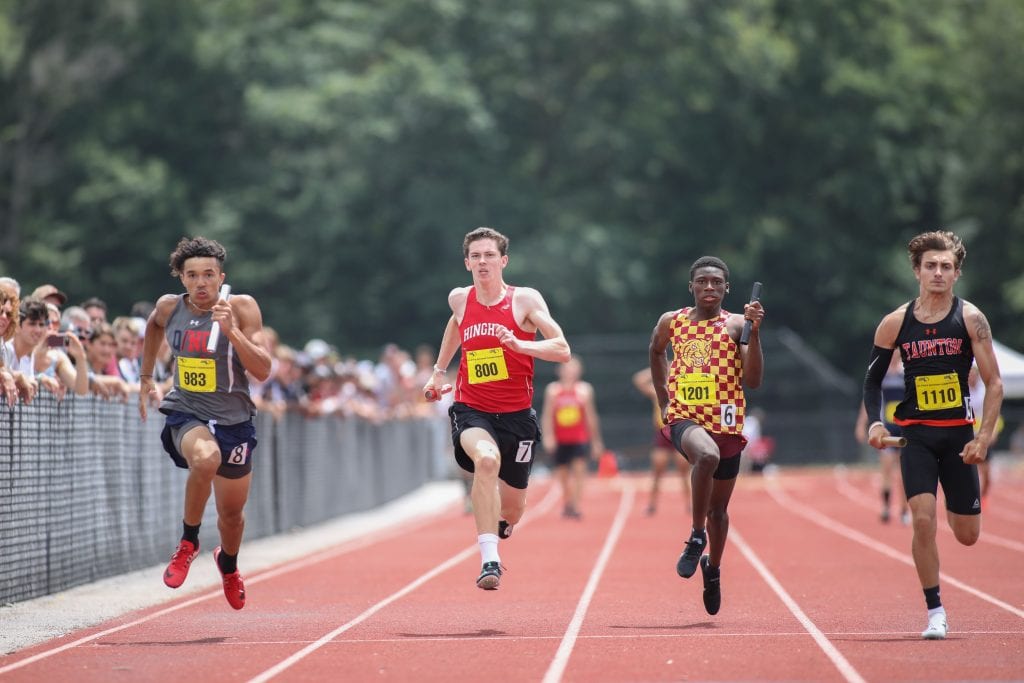 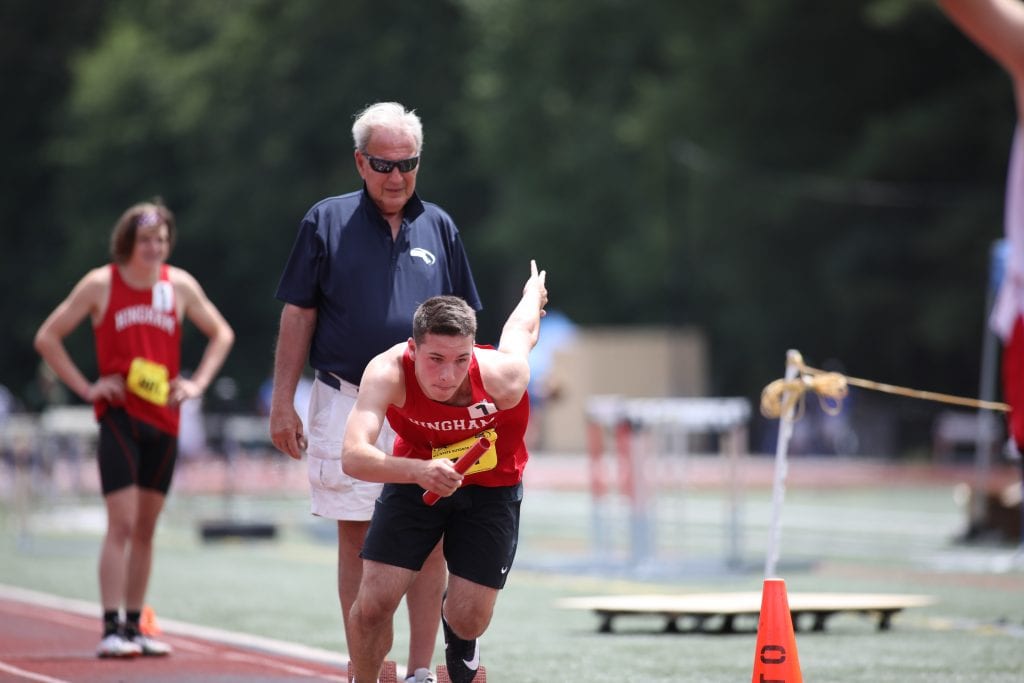 Sophomore Sam Benham starts the first leg of the 4x 400. 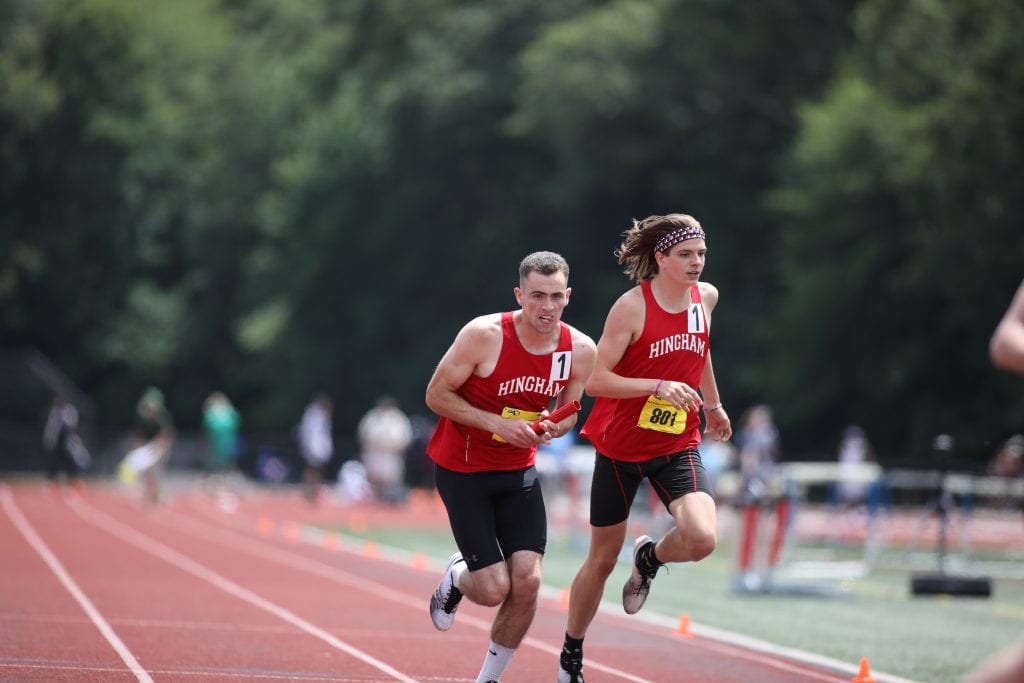 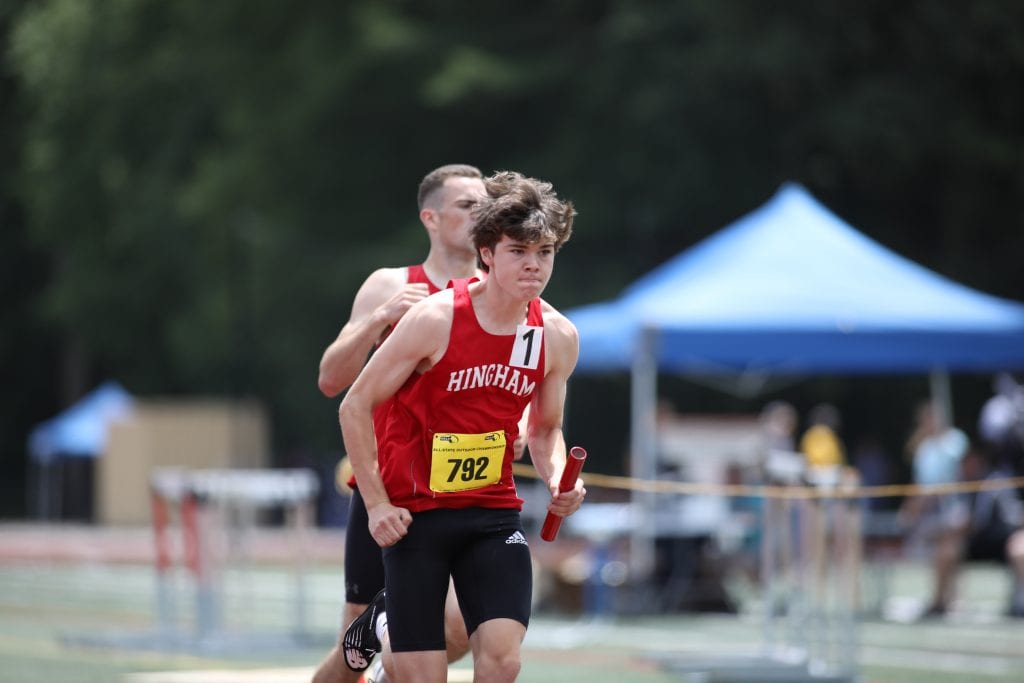 Sophomore Bryce Botelho finishes the last leg of the 4 x 400. 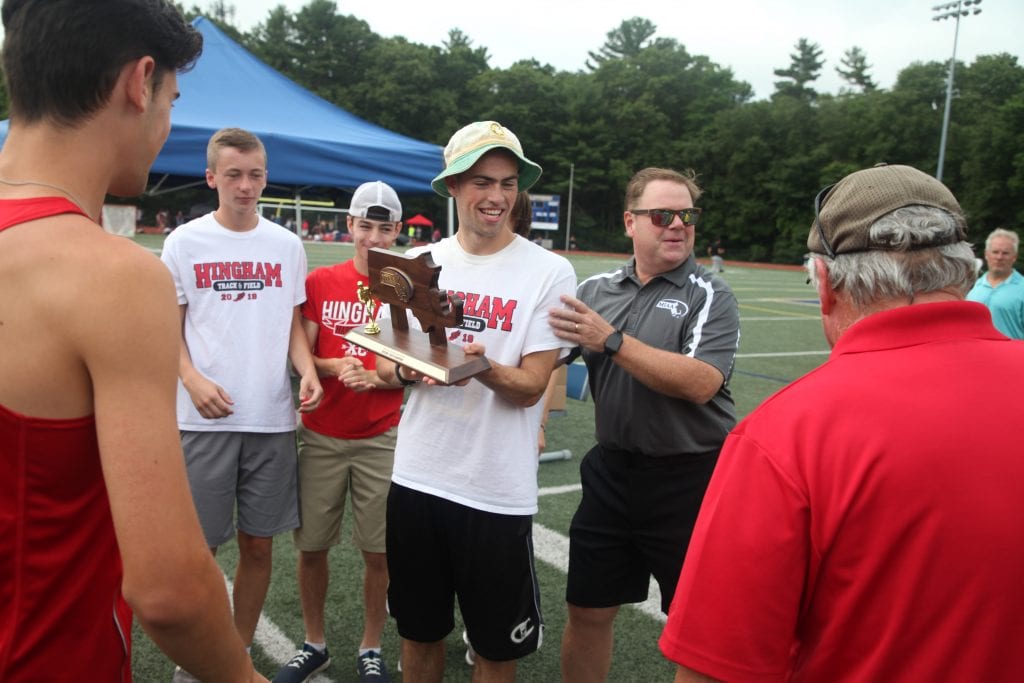 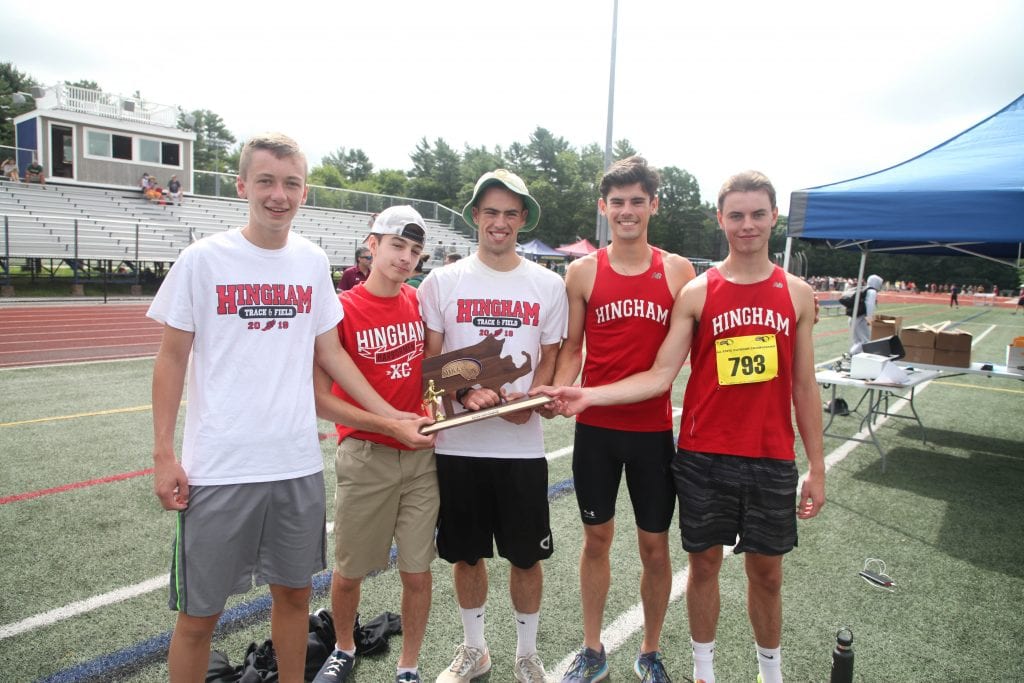