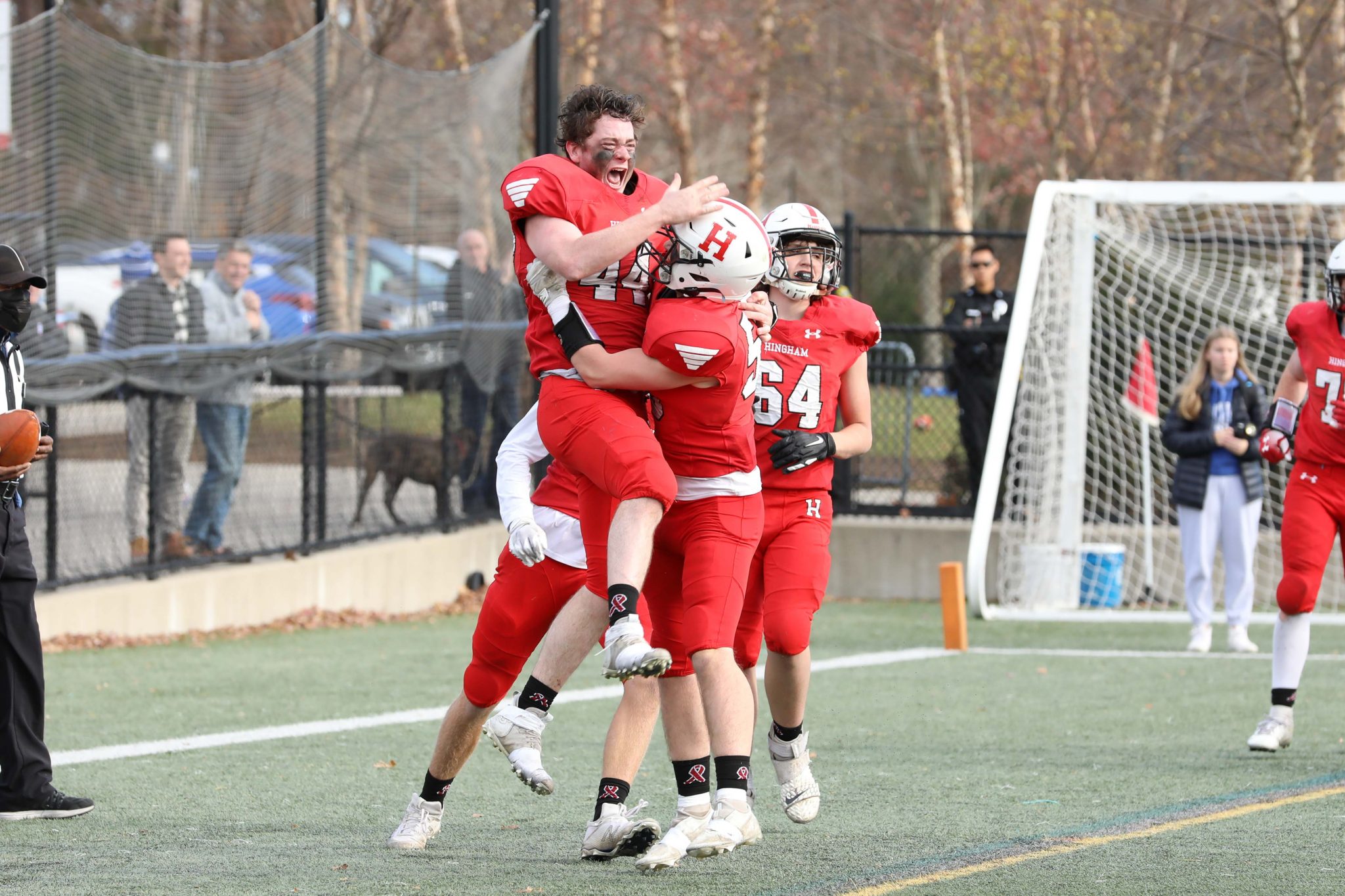 Senior captain Will Griffin scored his first of two TD's in his final game as a Hingham Harbormen.

Regular season wins are temporary, Thanksgiving day wins are forever.  Thursday’s game between Hingham and Scituate had two years worth of memories in it.  The long awaited turkey day rivalry returned this year in front of a full stadium.  In between all the off field celebrations and recognitions, there was one heck of a football game being play.

The day started out with a standing ovation for Hingham head coach Mark Nutley’s wife, Becky.  Not only was the team wearing custom stocks to support her fight against multiple myeloma, they also set up a fundraiser to help the family out during her clinic trial treatments.  It was great seeing Becky and the whole Nutley family on the field before the game.

If you’ve followed the Harbormen this season, you know that it’s been either feast or famine for this team.  With the Sailors heading to the D4 Super Bowl next week, the later was more likely for this game.  But the boys in red had different expectations as they took the field.

Hingham’s defense set the tone on the first series forcing Scituate to punt early.  The momentum carried over to the offense as senior captain Henry Crean put the first points on the board halfway through the first quarter with a 30 yd TD receptions from Dylan Pierce. The extra point was blocked.  The Sailors tied it up at 6-6 a short time later.  It remained tied until about 1:30 left in the half when Scituate connected on a long pass down field that resulted in a 70 yd TD.  It was really the only miscue the Hingham defense had all day.

Only down by one score to start the second half, the Harbormen were holding their own against one of the top teams in the state.  As good as the defense was in the first half, they played their best half of football all season in the second half.  Two inceptions by juniors Johnny Heffernan and Tony Fabrizio were game changers.  The Hingham secondary stepped when it counted and after senior captain Will Griffin scored a TD and 2-pt conversion to tie the game at 14, they provided the fuel needed to make the upset a reality.

The Harbormen had a chance to end the game in regulation, but Scituate intercepted the ball in the end zone on a pass that bounced in and out of the hands of senior Nick O’Connor with minutes remaining in the game.   As time expired with the score tied at 14-14, no one was really sure what was happening next.  After a short conference at midfield with the ref and head coaches, the announcement was made that we would be going to OT.  Each team would get four downs from the 10 yard line to score.  Scituate won the toss and decided to defer to the second positions.

Hingham only needed one play, a 10 yard power run up the middle by Griffin, to score in OT.  Griffin followed up the TD with the 2-pt conversion.  Up 22-14, Scituate needed a TD and conversion to tie the game.  On their first play, the Sailors completed a swing pass to the 6 yard line.  As the receiver turned to go up field, he was hit by junior Jack McGorry, who caused a fumble.  Hingham recovered.  Game over.

“That was a lot of fun,” Nutley said after the game.  “I take my hats off to them.  They are going to need to be healthy when they play Duxbury (in the Super Bowl).   These guys (pointing to his team) didn’t quit.  Not one of them.  We had a lot of things thrown at us and they answered every time.”

When asked about his defense, Nutley called over defensive coordinator Bill Reardon to take the spotlight.

“The secondary played great, the defensive line played great, the linebackers were good,” said Reardon. “This is a very good football team.  They’re going to the Super Bowl.  They are an outstanding football team.  So we knew we had to play our best today and we challenged them for a week and a half saying you have to come out, you got to play a physical game, you’ve got to take the play to them and they did.  And it was just enough to hang on.  I’m so proud of the kids.

It was one of Readon’s linebackers, who had the best game for the Harbormen, offensively.  Griffin, who is the starting linebacker, goes in as running back when the team needs to pick up a first down or by the goal line.  Griffin scored twice and had a 2-pt conversion.  You get the sense he almost single handily willed his team to win yesterday.

“It was the best way to end my high school career,  I could’t have asked for anything more,” Griffin said in front of the tv cameras at the end of the game. “Couldn’t have had it any better.  I swear to god, ever kid in that locker room stepped up today, they played their hearts out, they played for the seniors.  I’m happy we could get this win for every single senior on this team, for Coach Nutley, it’s awesome.”

While he, along with fellow senior captain Owen Richards, are the heart and soul of the defense, he gives a lot of credit to his fellow defensemen.

“Out of their minds,” he says before the question about the defense was even finished. “I mean, our entire secondary hasn’t had an interception in two years.  We get two in one game.  Some clutch situations.  Juniors stepping up really taking into their own hands.  I appreciate them for stepping up for all the seniors. It’s one of the best things anyone could have done.”

Even though much of the focus was on the seniors yesterday, Griffin explains how team was also playing for his coach and family.

“Everyone knew, without any words, that we would be playing for Coach Nutley and his wife,” adds Griffin.  “Today, we really wanted to get the “W”for him and his wife.  Showing our appreciation for Coach Nutley, showing up everyday having to deal with that.  He’s been awesome this year.”

As the fall season officially came to end on Thursday, so did the long, distinguished career of assistant coach Bob Noble.  Coach Noble finished up a 47 year career as a coach in for Quincy, Marshfield, and Hingham.  Congrats Coach on a great career.